A compact multi-effects rig for the gigging guitarist. 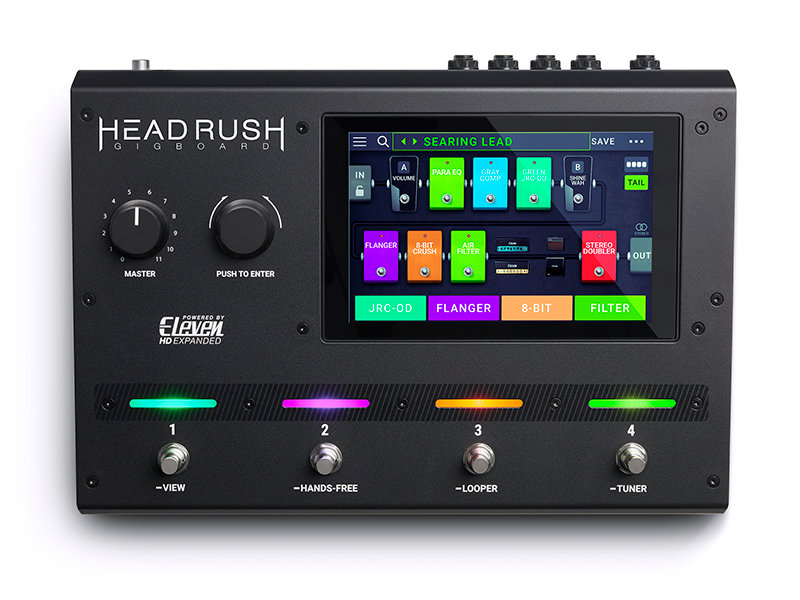 HeadRush has pulled the curtains back on its latest product: the Gigboard. It’s essentially a petite version of the brand’s flagship FX processor, the Pedalboard. It comes with the same quad-core processor, Eleven HD Expanded DSP software and seven-inch touchscreen as its big brother, but has the edge on portability.

Like the Pedalboard, this multi-effects processor offers HeadRush’s extensive library of over 100 amp, cab, mic and effects models. You also have the option of loading custom or third-party effects such as those supplied by Celestion. This pedal ought to handle most genres you throw at it.

Jumping into its design, the Gigboard features a fairly clean layout of only two knobs, four footswitches and a large color display on its faceplate. The seven-inch touchscreen is the cornerstone of the pedal’s intuitive UI, allowing you to simply tap, swipe and drag-and-drop to create and edit rigs on the fly. It also provides vital information when tweaking tones during live performances.

The two knobs, labelled “Master” and “Push to Enter,” serve as volume control and an option selector respectively. The four footswitches, on the other hand, serve various functions:

Additionally, bright color-assignable LED strips indicate each of the four footswitches’ status in a given rig—another handy feature for live performances.

The Gigboard excels as a standalone FX processor, but it’ll also fit seamlessly into an existing rig. Its onboard FX loop can integrate pedals and outboard gear at any point in a signal chain.

In the studio, this processor functions as an integrated USB audio interface that records and re-amps audio quality up to 24-bit 96kHz.

Check out the Gigboard here:

Retails for $649. More information at headrushfx.com.