In a move that the company claims to cater to contemporary players, Ibanez has announced the AZ series of electrics to join the party. And at first blush, the new series looks to be among the top-of-the-line ranges from the Japanese brand.

There are two line-ups within the AZ family: Prestige and Premium. They boast identical dual-cutaway body shapes, oval “C”-shaped neck profiles that are thicker than those on your typical RG, and new Seymour Duncan Hyperion pickups. These pickups are making their debut on the AZ series, and Ibanez says they deliver tonally balanced and moderate outputs. Both the Premium and Prestige lines also sport luminescent side dot positions, all the better to see with on dark stages.

The Prestige models are the more spec’ed out of the pair. The three guitars here—AZ2402, AZ2204F and AZ2204—have alder bodies and come in either HH or HSS configurations. Their roasted maple necks and fretboards are also a notch above the Premium’s, having undergone a special ‘S-TECH’ treatment to increase the wood’s “stability, durability, water resistance and tolerance of temperature changes,” according to Ibanez.

The three Premium versions—AZ242BC, AZ242F and AZ224F—have American basswood bodies as well as roasted maple necks and fretboards, albeit without that S-TECH magic.

For more information, check out ibanez.com. 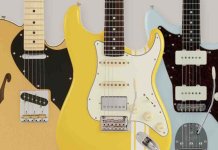 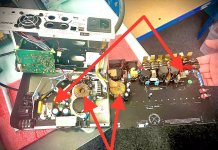 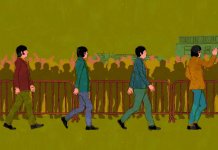