Expect over 40 fresh guitars this year. 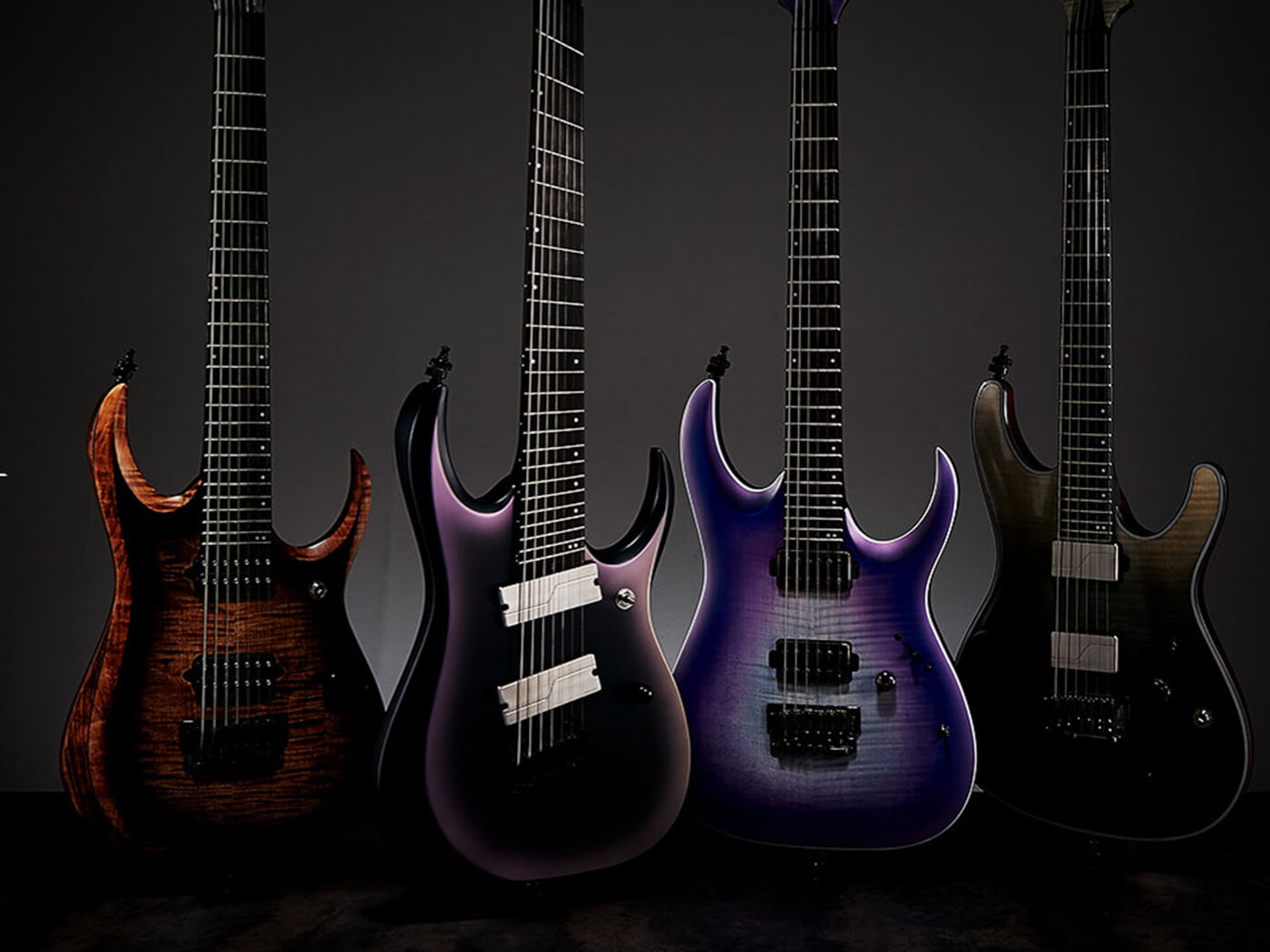 Ibanez has come out swinging in 2019, announcing a massive line-up of over 40 guitars ahead of Winter NAMM.

The guitars include signature models as well as a brand-new series, Axion. Here’s what to expect:

Ibanez’s new Axion Label targets metal players, as well as those seeking a new six-string experience. The models in this range are spec’d out with modern sonic and aesthetic appointments, and are offered in three categories: the RGA, the RGD and the S lines.

*Note: Unless otherwise stated, all Axion models come with a Nitro Wizard neck that’s built from a five-piece panga panga and walnut combination, and a 15.75-inch-radius Macassar ebony fretboard with offset dot inlays.

This ash-bodied guitar is loaded with Bare Knuckle Aftermath humbuckers at the neck and bridge. It also sports an Edge-Zero II tremolo bridge, and is decked out in an arresting Antique Brown Stained Low Gloss finish.

This quirky model features a nyatoh body with a flamed maple top. In terms of electronics, the instrument is armed with Bare Knuckle Aftermath humbuckers at the neck and bridge positions. Hardware appointments include a Gibraltar Standard II bridge, while the guitar comes n a snazzy Indigo Aurora Burst Flat finish.

This seven-string beast also features a nyatoh body with a flamed maple top, but with Bare Knuckle Aftermath-7 humbuckers at both the neck and bridge. Rounding off the guitar’s look is a Gibraltar Standard II-7 bridge and a cool Indigo Aurora Burst Flat finish.

This sleek six-string has a layered ash and nyatoh body with a flamed maple top. Tone comes by way of two ceramic-based Fishman Fluence Modern Humbuckers that slot in at the neck and the bridge, respectively. Elsewhere, the axe sports a mono-rail bridge and black hardware, as well as an alluring Cerulean Blue Burst Low Gloss finish.

The RGD61AL also features a layered ash body with a flamed maple top. However, it has an alternate fretboard configuration: a 15.75-inch-radius birdseye maple fretboard that’s lined with black step offset dot inlays.

It ships with DiMarzio Fusion Edge humbuckers at the neck and bridge positions. It has a Gibraltar Standard II bridge and black hardware that offers a nice contrast to its Stained Sapphire Blue Burst finish.

Another seven-string, this guitar comes with a nyatoh body and a Nitro Wizard-7 multi-scale neck. This model is stocked with Fishman Fluence Modern humbuckers (ceramic) at the neck and bridge positions. It also boasts a mono-rail bridge and black hardware. Completing the look is a mysterious Black Aurora Burst Matte finish.

There are two models in this category: the S61AL and its seven-string cousin, the S71AL.

Both guitars are available in a Black Mirage Gradation Low Gloss finish.

11 new signature models will be released in 2019. Leading the pack are AZ-inspired pieces for Andy Timmons, Polyphia’s Timothy Henson and Scott LePage, and Chon’s Mario Camarena and Erick Hansel. Additionally, Marco Sfogli and Luke Hoskin will each receive their very first signature models.

Ibanez has released a 20th-anniversary signature model for the revered virtuoso. The ATZ100 combines the familiar specs of the AZ prestige model with several new features that Timmons himself favours.

Like an alder body, an ATZ S-Tech one-piece roasted maple neck, and a 12-inch-radius S-Tech Wood roasted maple fretboard. This guitar also comes with DiMarzio “The Cruiser” neck, middle and bridge single-coils, and rounding off the stunning piece is a Wilkinson-Gotoh VSVG tremolo bridge.

Similar to his bandmate Henson’s guitar, Scott LePage’s SLM10 features an American basswood body with a quilted maple top, an AZ Oval C roasted maple neck, and a 12-inch-radius roasted maple fretboard. It, however, has a rather unconventional HSS combination comprising three DiMarzio pups: an SLM Original neck pickup, a True Velvet neck pickup at the middle, and a True Velvet middle pickup at the bridge.

The math rock guitar-slinger, who plays in Chon, gets a HSS guitar with three Seymour Duncan pickups: a Hyperion single-coil in the neck and middle positions, and a Hyperion humbucker at the bridge. It has an American basswood body, an AZ Oval C roasted maple neck, a 12-inch-radius roasted maple fretboard, and a beautiful Lavender Metallic Matte finish.

Not to be outdone by his bandmate, Hansel receives a nyatoh-bodied guitar with a walnut top, an AZ Oval C roasted maple neck, and a 12-inch-radius jatoba fretboard. Seymour Duncans also power this axe: there’s an Alnico II Pro single-coil at the neck and a Hyperion humbucker at the bridge. And instead of lavender, Hansel went with a sleek Transparent Green Matte finish.

The sparkling MSM100 features an alder body with an AAA flamed maple top. It has an AZ Oval C/S-Tech Wood one-piece roasted maple neck, a 12-inch-radius S-Tech Wood Roasted Maple fretboard and two DiMarzio pickups: an Air Norton humbucker at the neck and Tone Zone humbucker at the bridge.

The JEM7VP is Ibanez’s ninth signature model for legendary guitarist. This stunning piece features an alder body, a Wizard five-piece maple and walnut neck, and an ebony fretboard that bears an etched Tree of Life inlay.

The axe is outfitted with a set of DiMarzio pups in a unique HSH configuration. Two Evolution humbuckers feature at the neck and bridge, while an Evolution single-coil takes its place in the middle. Rounding off the guitar’s features are an Edge tremolo bridge and gold hardware.

The chrome-covered JS1CR is also the ninth Ibanez signature model for Joe Satriani. It features an alder body, a JS three-piece maple and bubinga neck, and a 9.84-inch-radius rosewood fretboard. Satch opted for a simpler pickup configuration than his G3 collaborator: a Sustainiac Driver single-coil at the neck and a DiMarzio Satchur8 humbucker at the bridge.

The shredder’s third signature model with Ibanez has a poplar body, a PGMM maple neck, and a Treated New Zealand Pine fretboard with a radius of 15.75 inches. A pair of Ibanez Infinity humbuckers occupy the neck and bridge positions, and completing the guitar are an Ibanez F106 bridge and a sleek Metallic Light Green finish.