Armadillo claims Evan Rubinson was “removed from his role” as CEO and President, rather than “stepped down”

Rubinson‘s departure preceded a loss for Armadillo in its case against Gibson.

Evan Rubinson, the former CEO and President of Armadillo, parent company of Dean Guitars, “was removed from his role” at the company, according to a new statement from the company’s owner, and Rubinson’s mother, Pamela Keris-Rubinson.

It has been a turbulent few weeks for Armadillo, to say the least. To kick things off, reports circulated that Evan Rubinson had departed the company in rather dramatic circumstances, with one source claiming that law enforcement escorted him out of Armadillo’s headquarters. It then came to light that he is now facing a lawsuit from his mother, alleging the embezzlement of $420,000 from his late father’s company Thoroughbred. Rubinson denies the allegations completely.

Then, on the same day that we reported on that lawsuit, the judge presiding over the legal battle between Armadillo and Gibson handed down a damning final judgement – calling for Dean to cease the production of its V, Z and Gran Sport guitars, and for Luna to cease production of the Athena 501. All legal costs for the case also fell on Armadillo and its investment partner Concordia – with Gibson’s requested share totalling over $330,000.

When we spoke to Evan Rubinson, he stated that the ruling had “zero to do with” his departure. Notably, he also stated that he “stepped down” – something that conflicts with the new statement from Pamela Keris-Rubinson.

“First we want to thank you for all the work, effort, and support during these challenging times,” it reads. “Many of us are facing business challenges the likes of which we have not experienced in our lifetime. We remain confident in our company, and the products we work so tirelessly to bring to market for our wonderful brands and customers. Our goal is to inspire musicians everywhere to continue making the gift of music.

“We want to share with you that Mr Evan Rubinson was removed from his role as CEO/President of Armadillo Enterprises.

“Our team is committed to continuing the legacy of Dean, ddrum and luna created by Elliott Rubinson, our founder, and my husband. For Elliott, and for us all, this is our life’s work and our passion.” 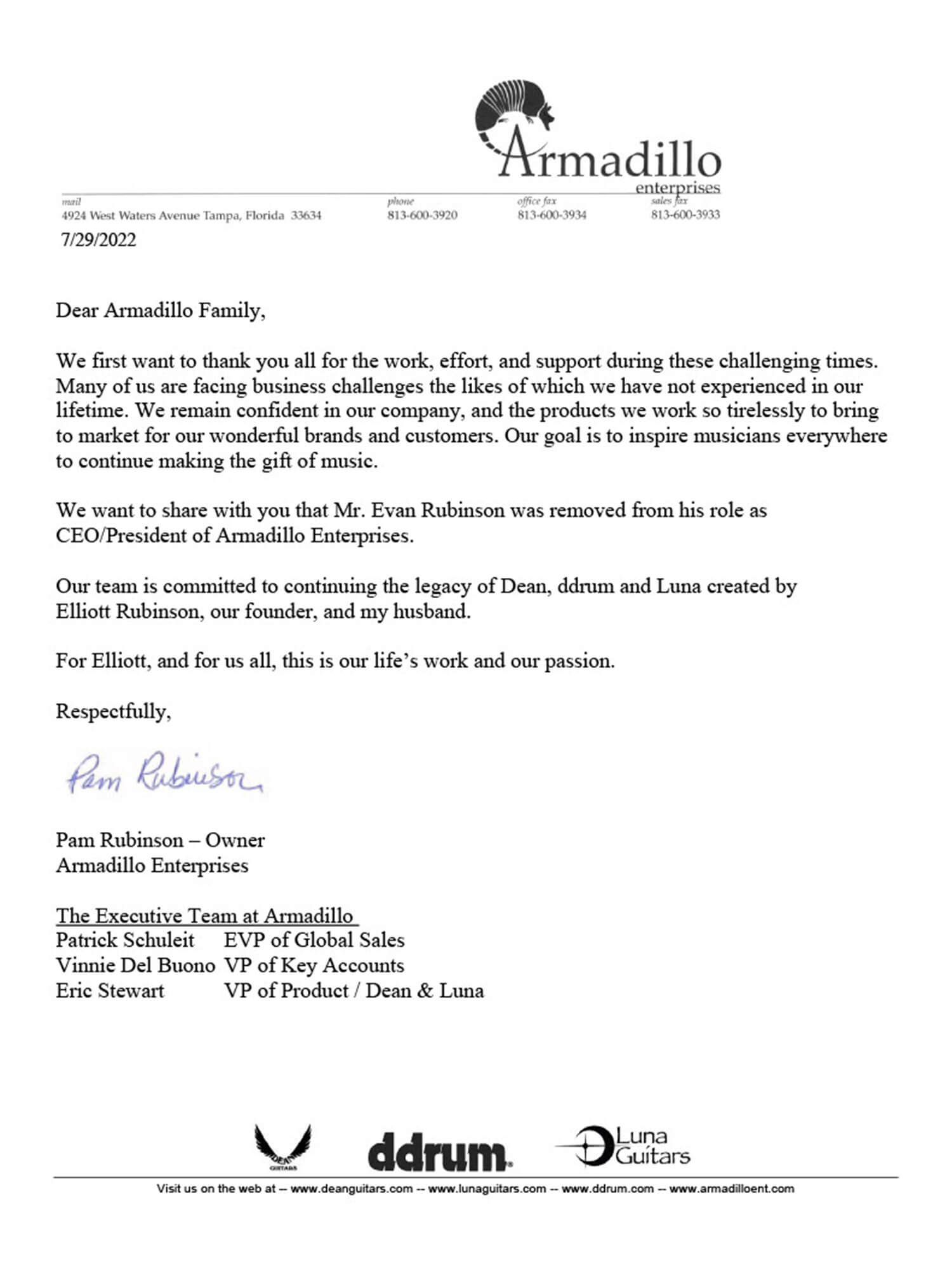 In either case, it is certainly true that Evan Rubinson is no longer at Armadillo – and that the company has some interesting times ahead. Stay tuned to Guitar.com for more developments on the embezzlement suit, and the consequences of the trademark ruling.