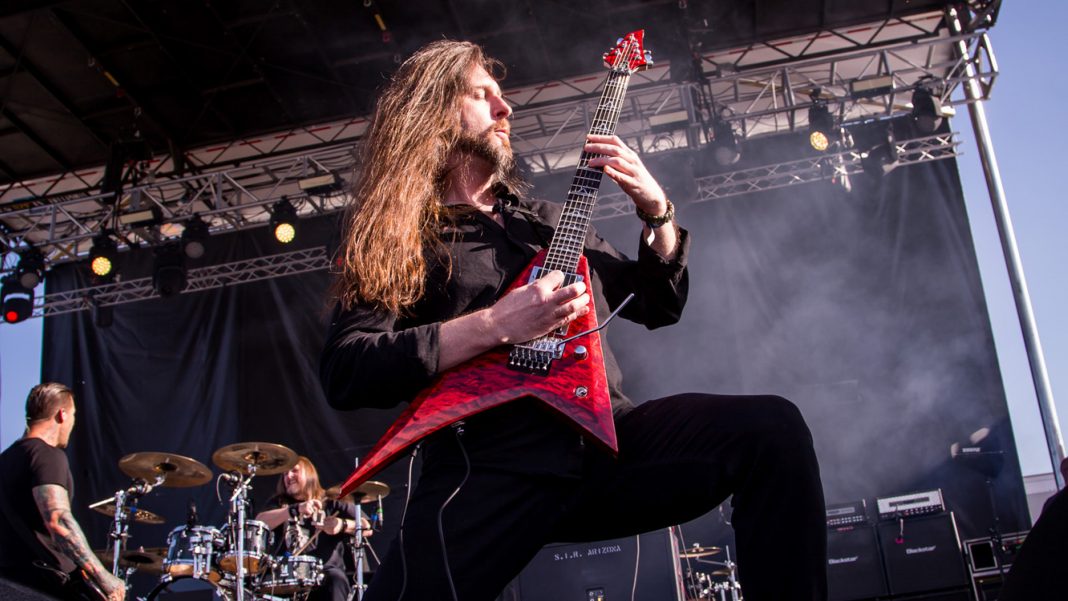 Herbert’s signature guitar is based upon the Jackson Rhoads, a Flying V-shaped axe that looks primed to set the moshpit ablaze. It has a mahogany body, a graphite-reinforced through-body neck, an ebony fretboard, and a pair of Seymour Duncan Duality humbuckers that have been tweaked to accommodate an onboard preamp. The result, according to Jackson, is a powerful yet versatile beast that can swerve from metal to blues to rock.

The Oli Herbert Rhoads lists for $7,999, and is available in Red Rum.

Fans of djent band Periphery will be pleased to hear about the refreshed six- and seven-string guitars in Mansoor’s signature range: the USA Signature Juggernaut HT6 and HT7, both of which have ‘upgraded’ versions, the HT6FM and HT7FM.

All four guitars have dual Bare Knuckle Ragnarok humbuckers—with laser-etched carbon fiber covers, no less—and graphite-reinforced caramelized maple necks, among other similarities. But the HT6FM and HT7FM have mahogany rather than basswood bodies, and, as the icing on the cake, flame maple tops.

If you’ve drooled over Broderick’s USA Signature models but don’t want to splash the cash, here’s some good news: Jackson has added Pro Series versions, which are significantly more affordable, of the Act of Defiance guitarist’s signatures to the mix.

The Pro Series Signature Chris Broderick Soloist HT6 and HT7 are built with mahogany bodies, graphite-reinforced through-body maple necks and rosewood fretboards. And like their higher-end brethren, they also bear DiMarzio humbuckers designed by Broderick himself.

With influences that span jazz to heavy metal, Davidson isn’t satisfied with a six-stringed instrument—which explains why his new signature guitar is available only as a seven-stringer. The Pro Series Warrior WR7 comes loaded with DiMarzio Imperium pickups, a mahogany body with ash top, a graphite-reinforced through-body neck, and an ebony fretboard.

The WR7 lists for $1,768 and is available in Distressed Ash.

For more information, check out jacksonguitars.com.