Johnny Ramone’s Guitar To Be Sold 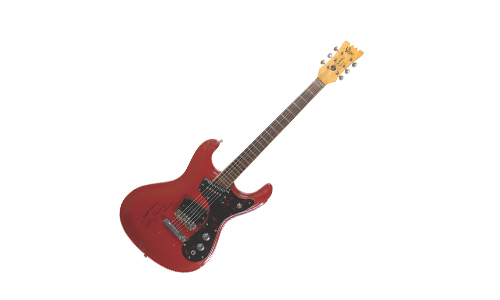 The six-string guitar features several modifications Ramone made to make the guitar fit his sound and style, the most significant being the replacement of the tremolo system with a stop bar tailpiece and installation of a DiMarzio FS-1 bridge pickup, as well as a tortoiseshell pickguard.

Included in the sale, is the original hardshell case.

This is a rare instrument in its own right, and the only red guitar or Ventures Model 1 that Ramone owned; it was in his possession for at least seven years, from circa 1982–83 until he sold it in 1990; the first photographic evidence of Ramone playing the guitar comes from a show at the Eagle’s Hippodrome in Seattle on May 5, 1983. Johnny most often used this guitar for TV appearances and it can be seen up-close during a 1988 performance on MTV.

In 1990, Ramone sold this guitar to friend and former Ramones band driver Gene Frawley, signing and dating it on the occasion. A subsequent owner later personally confirmed the ownership details with Ramone, who acknowledged that he owned and used the guitar throughout the 1980s before selling it to Frawley.

Johnny Ramone was a founding member of the seminal punk band that broke onto the New York music scene in 1974. Johnny was known for his fast, high-energy guitar playing. His style almost exclusively consisted of rapid down strokes and bar chord shapes.

This unique playing style and buzz saw-like sound of Johnny’s guitar parts was highly influential on many early punk rock guitarists and keeps him listed on numerous top lists of the greatest guitar players.

On September 15, 2004, Johnny Ramone died in his Los Angeles home at the age of 55 after a five-year battle with prostate cancer.

Among other items to be featured:
Jerry Garcia handwritten letter to Vogue Cover Model.
Elvis Presley signed candid photograph in his Army uniform, circa 1950’s.
Beatles signed 1963 portrait taken at Odeon Southend.
A special live auction event will take place on January 22 at RR Auction’s Boston Gallery, and will feature nearly 150 items. More details can be found online at www.rrauction.com.