The company bills it as the “Lamborghini of overdrives.” 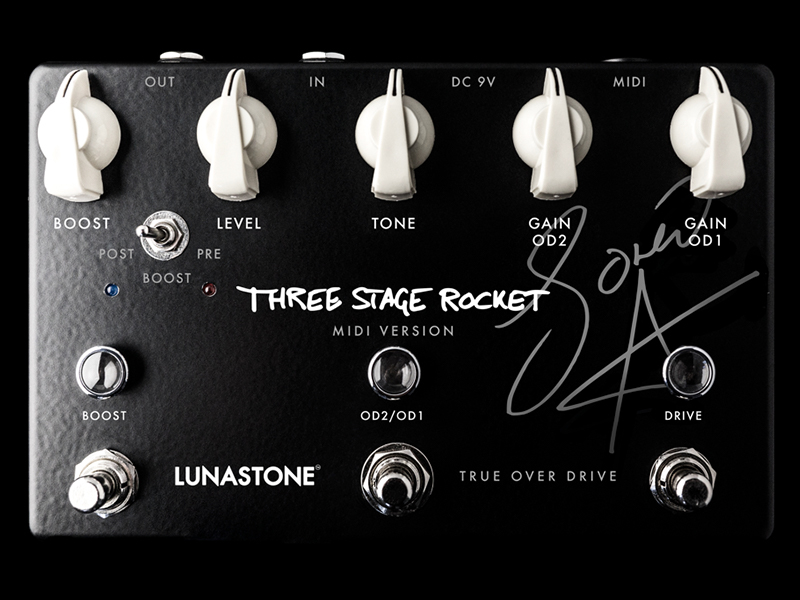 LunaStone has unveiled an update to its popular Søren Andersen signature overdrive pedal, the Three Stage Rocket. The refreshed stompbox adds MIDI capabilities and a few aesthetic enhancements on top of all the other bells and whistles the original already possesses.

This added luxury enables players to save their desired settings and access them easily. If you already have a MIDI switching system in your rig, this could be a godsend. LunaStone also installed soft-touch switches, added LEDs to indicate the position of the boost stage, and updated the graphics on the enclosure.

The rest of the stompbox remains the same as its predecessor.

At its core, the Three Stage Rocket is a beast of an overdrive. Its first two stages are dedicated to flexible overdrive circuits, which are accessible via the “OD1/OD2” footswitch. The first circuit offers a smooth and even overdrive with rich and thick distortion, great for power chords. The second circuit gets a little wilder. It’s loud, heavy and more distorted, and provides some decent sustain for heavier rock.

The third stage is a boost of up to 15 dB. You can route this either before or after the drive stage: Set it pre-drive and you’ll have a more saturated overdrive; place it post-drive and bristle as the volume gets cranked up even higher.

The Three Stage Rocket plays well with other pedals, too, so you needn’t worry if you have a complicated setup. To give you an idea of this, the brand has put up a playlist that demonstrates the pedal with a variety of setups. Check it out here: