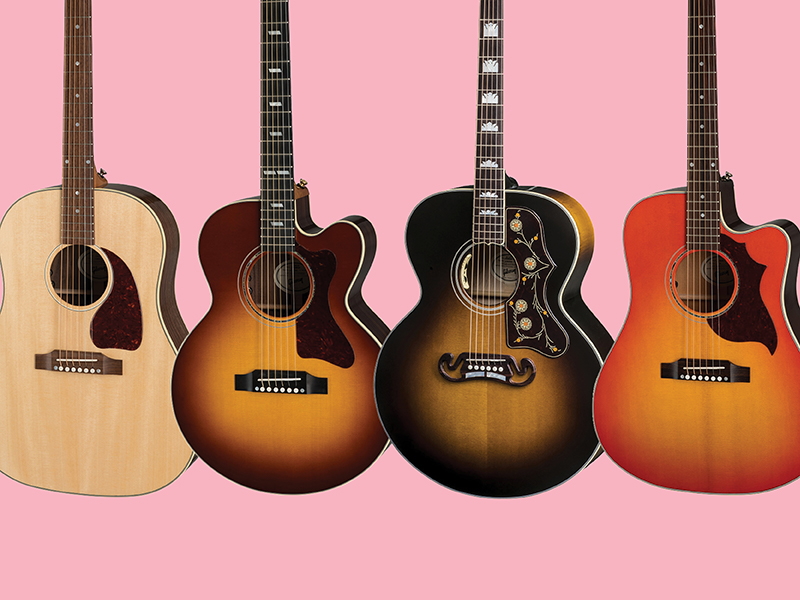 Gibson hasn’t forsaken its acoustic players, adding seven models for 2019—one more than  last year. The new collection ranges from a beginner-friendly J-45 Studio to the performance-grade SJ-200 Standard.

This acoustic is all about big sound in a small package.

Compared to the 2018 edition, this Parlor Rosewood Avant Garde sports only a few welcome improvements. It has mother-of-pearl parallelogram inlays rather than simple dot ones, and a traditional belly-up bridge instead of a modern belly-down model.

Apart from these, the acoustic has the same rosewood back and sides with a Sitka spruce top, mahogany neck and Richlite fingerboard of the 2018 version.

With this flamboyant guitar, Gibson hopes to keep its “King of the Flat-tops” legacy alive.

The 2019 edition of the super jumbo features the time-honored combination of maple sides and back with a Sitka spruce top and a maple neck. Its wide body contributes to its full-bodied sound, and the LR Baggs Anthem pickup system—with “Volume,” “Mix” and “Phase” knobs—lends finesse to muscle.

Lists for $5,249. Available in Vintage Sunburst.

Fans will be glad that Gibson has kept things very familiar with the 2019 edition of the J-45 Walnut AG. And even more so because this cutaway model clocks in at $200 less than its predecessor.

The J-45 Studio is the entry-level offering of the lot, and it’s made for hours of sessions at the studio. With a walnut back and sides, a Sitka spruce top and a mahogany neck, you know this guitar’s meant to be your trusty workhorse. Add a slim-profile dreadnought body and flat 16-inch fretboard radius, and you have a guitar that’s as comfortable as it is reliable.

Lists for $1,499. Available in Antique Natural.

Surprise, surprise—Gibson’s best-selling acoustic guitar gets a new edition this year. Here, the brand adopts the adage “If it ain’t broke, don’t fix it,” so the J-45 standard remains virtually unchanged.

Mahogany back and sides with a Sitka spruce top, a mahogany neck, a rosewood fingerboard, a traditional belly-up rosewood bridge and a LR Baggs VTC system combine to produce that classic J-45 tone we love: warm mids and punchy bass.

Lists for $2,749. Available in Vintage Sunburst.

While the regular Hummingbird remains identical to the 2018 version, Gibson has introduced a new sibling to the family: the single-cutaway Hummingbird Mahogany Avant Garde 2019. This is a slightly more conservative Hummingbird, perfect for artists who prefer to let their music do the talking.

It doesn’t have the intricate pickguard and deep orange sunburst of the iconic acoustic guitar, but makes up for it with several progressive specs. Among them are a 25.5-inch scale length, 16-inch-radius fretboard and Gibson’s “Advanced Response” neck profile. A more modest pickup system—featuring the LR Baggs Element—keeps things simple with only a single “Volume” knob.