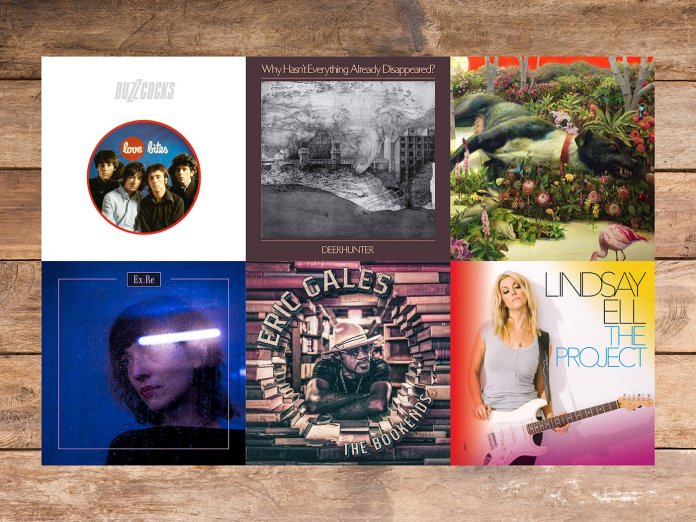 The carols are fading and the Auld Lang Synes have been sung, so we’re blitzing into 2019 the best way we know how: with loud guitars.

Check out the tracks that are on heavy rotation in our office this month, from old classics to some of pop’s most inventive guitar tunes.

Ex:Re: Where The Time Went

Daughter’s Elena Tonra has released a solo record under the Ex:Re monicker. Where The Time Went is raw, honest, and wonderfully atmospheric.

Buzzcocks: Ever Fallen In Love (With Someone You Shouldn’t’ve?)

After the sad passing of Pete Shelley at the end of 2018, we’ve been reminding ourselves of what a great band Buzzcocks were, with their most beloved song.

Criminal is a track that our Ones To Watch star released back in 2017 and this perfect-for-radio single catapulted her into the country-pop stratosphere, sending her album, The Project, top of the US charts.

Atlanta rockers Deerhunter return with eighth album, Why Hasn’t Everything Already Disappeared?, this month. Element is a brooding psychedelic standout from the record.

You’ll see Jeff Buckley’s famous 80s Fender Telecaster in stunning detail in the cover feature of our January issue [stay tuned for that!], so now is as good a time as any to remind you of one of his greatest recordings.

The lead single from Gales’ 18th studio album, The Bookends, due out in February, finds him in suitably incendiary form.

The 1975 might be the hottest band in the world right now, and with its looped post-punk guitars and bouncy basslines, Give Yourself A Try demonstrates why they’ve captured the pop zeitgeist.

Ronnie Wood recently published his new book, The Rolling Stones Set Lists, and we thought it was fitting to revisit this great slide-drenched rendition of a Delta-blues classic from 1995 live album, Stripped. We managed to speak to the guitar legend, so stay tuned for the full interview.

Recorded as part of a two-track session with Spotify in New York, Bridgers’ soft
and hushed cover of The Cure’s classic is more proof that she’s one of the most mesmerising talents in recent memory.

Released as a companion to the Netflix release of The Boss’s much-hyped Broadway residency, this stripped-down vision of an American icon, both in word and song, is a pure treat for fans.

For more music news from the guitar world, click here.