Alanis Morissette on her Rock Hall 2022 absence: “There is no need for me to spend time in an environment that reduces women”

The artist was due to perform alongside Olivia Rodrigo.

Alanis Morissette has spoken out on her absence from the Rock And Roll Hall Of Fame Induction Ceremony 2022, after the Ironic singer was due to perform with Olivia Rodrigo but withdrew.

The ceremony took place at the Microsoft Theatre in Los Angeles last Saturday (5 November), and it was originally planned that Morissette would duet Carly Simon’s You’re So Vain with pop star Olivia Rodrigo.

The performance was set to honour the inductee, who was unable to attend the ceremony. However, Morissette withdrew from the event, and Rodrigo performed solo.

Morissette then took to her Instagram stories yesterday (7 November) to explain why she decided to drop out from the event following “mis-informed rumblings” about her absence.

Before clearing up that she had no issues with any of the artists at the event including Rodrigo or any of the other performers, she began, “I have spent decades in an industry that is rife with an overarching anti-woman sentiment and have tolerated a lot of condescension and disrespectfulness, reduction, dismissiveness, contract-breaching, unsupportiveness, exploitation and psychological violence (and more) throughout my career.”

Morissette didn’t specifically name any people who she felt participated in this alleged behaviour, and later added that “Hollywood has been notorious for its disrespect of the feminine in all of us.” She then continued to explain, “I’m at a point in my life where there is no need for me to spend time in an environment that reduces women. I have had countless incredible experiences with production teams with all genders throughout my life.

“So many, and so fun. There is nothing better than a team of diverse people coming together with one mission.” She concluded, “I’ll continue to show up in those environments with bells on.”

You can read the full statement below: 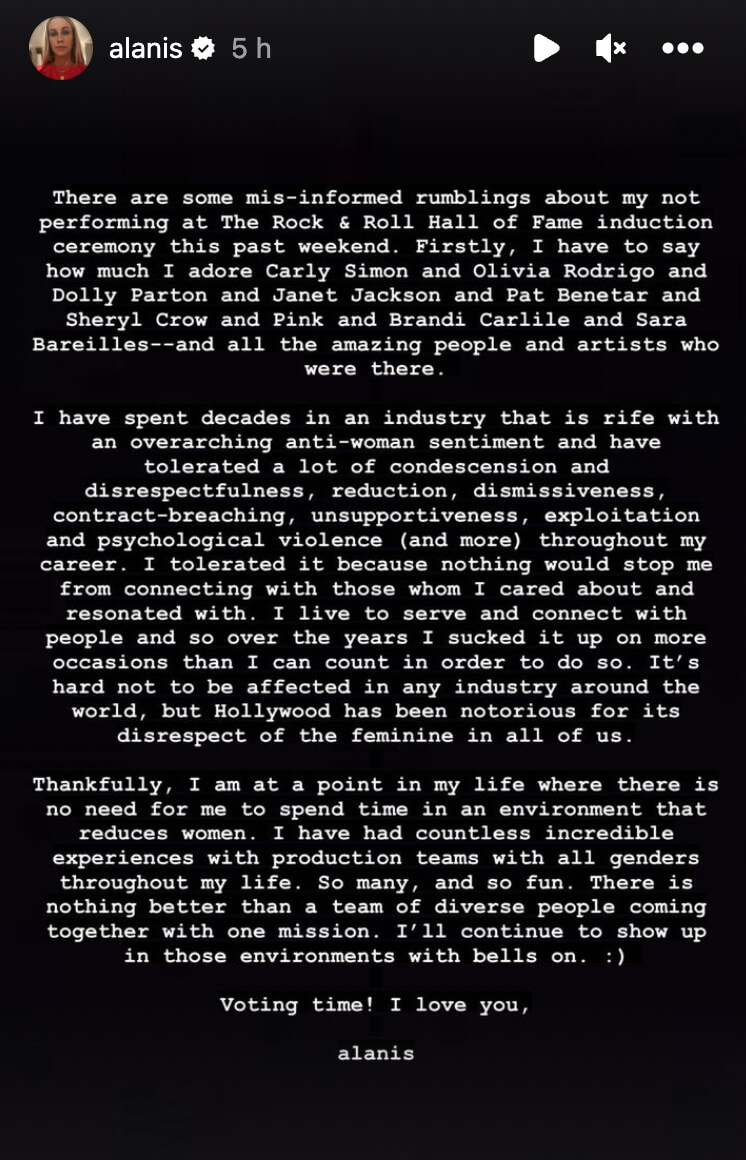