“All you ageing baby boomers out there, give it a shot.” 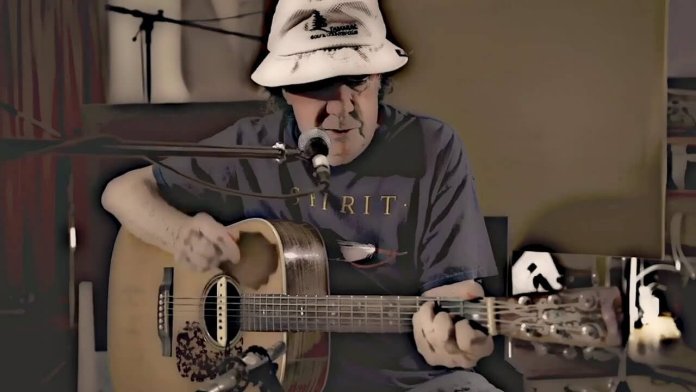 The song arrived ahead of next week’s election day (3 November), encouraging Americans “give love a chance” and “set [their] liberty free”. Backing up Bob Young was his brother Neil on harmonica and vocals, as well as backing band The Peterboroughs.

Take a listen below.

In a press release for the song, the elder Young explained that he “didn’t set out to become a songwriter and singer at 78 years of age” but that the song instead came out as “an organic event”.

“I was watching Donald Trump on TV a couple of years ago and wrote down a few lines. When I got home, I found I could play those lines on guitar,” he explained. “Gradually, it became what it is now.”

Although his younger brother Neil is a celebrated folk icon – with 40 studio albums and several Grammy awards under his belt – the experience of writing and recording is very new to Bob Young.

“I had never done that either,” he admitted. “It was a band performance that had spontaneity.”

“In another session, some vocal harmony was added, and Neil played harmonica. My perspective is simultaneously that of a participant and spectator. I am watching myself do this.”

Bob ended his statement with a message to all the “ageing baby boomers out there” like himself.

“Give it a shot,” he encouraged. “As Yogi Berra put it, ‘It ain’t over ’til it’s over, and even then it ain’t over.’ I agree. I have more songs, all from the same creative spark.”

The music video for Hey America was put together by Neil Young’s wife, actress Daryl Hannah and filmmaker CK Vollick. Post-production methods – implemented to adhere to COVID-19 safety guidelines – were used to make it appear as though three people were singing side-by-side.

A brief history of Gibson