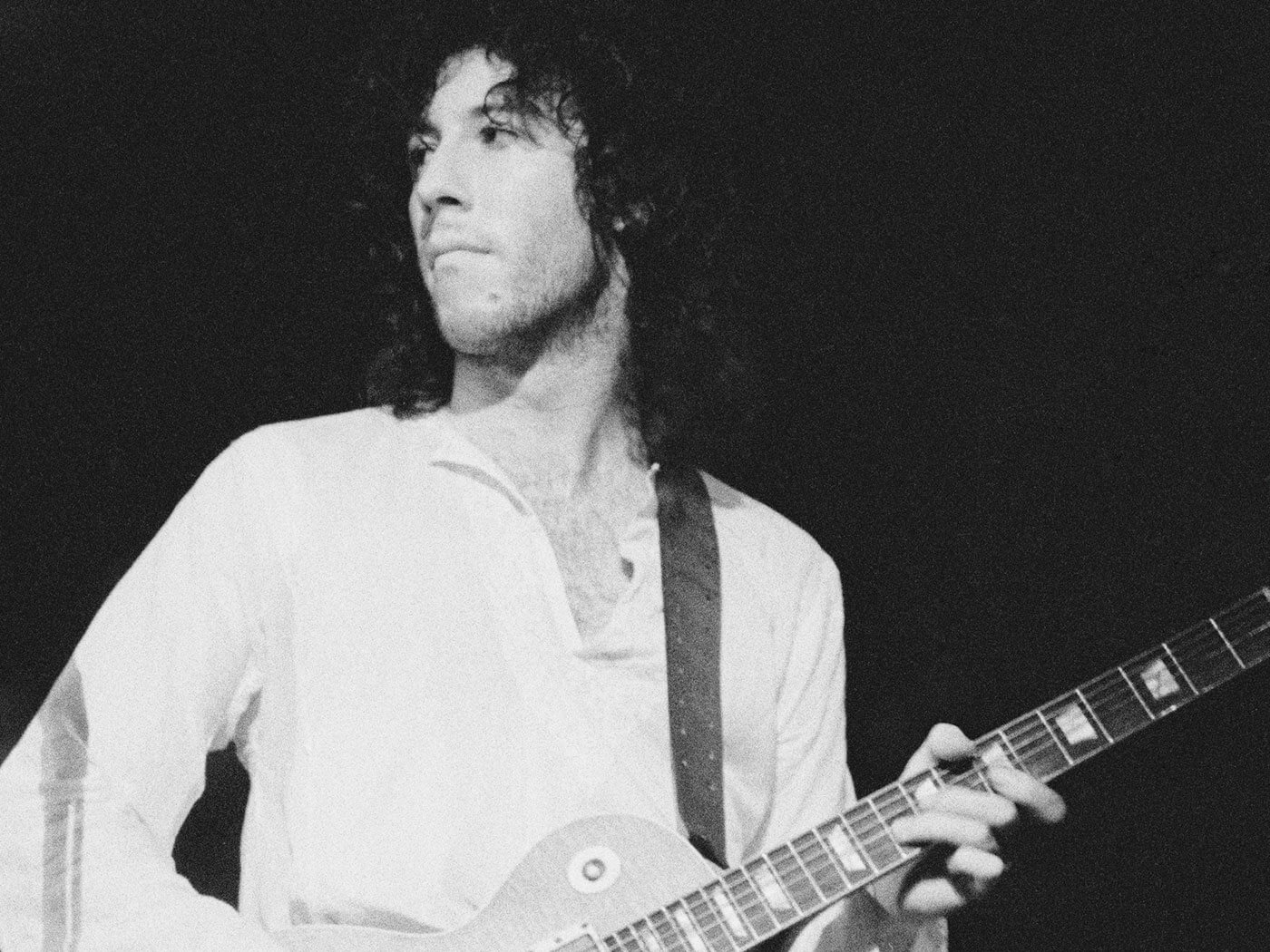 Supposedly destroyed by an LSD trip and subsequent electric-shock therapy, Peter Green – who has sadly died aged 73 – may always be characterised as a rock ’n’ roll casualty. But what cannot be tarnished is his legacy of simply beautiful guitar playing and visionary songwriting. In the canon of legendary 1960s British musicians, Green’s music sits proudly alongside the best.

Like most of his post-war generation, Bethnal Green-born Peter Greenbaum was fired up by skiffle and rock ’n’ roll, though his early bands, including The Muskrats and The Tridents, never took off. Indeed, although Green had learnt to play guitar as a teen, in The Tridents he was ‘merely’ a bassist. But in the mid-1960s London clubs, he was soon seduced by the sonic sting of another youth, 18 months his senior. “I decided to go back on lead guitar after seeing Eric Clapton,” Green later remembered. “I’d seen him with the Bluesbreakers before he considered singing and his whole concentration was on his guitar – he had a Telecaster – and it was really impressive. And he had a Les Paul, his fingers were marvellous. It took everything away from me, like my birthday, Christmas; you forgot everything… just listen to this.”

Thanks to a friend of his, Nick Maynard, Green was soon swimming in blues. “The bloke laid some albums on me. A John Lee Hooker album, Blues Volume 2 with Otis Rush on it, Sonny Rhodes, a couple of other albums, like a folk festival of the blues with Buddy Guy, Howlin’ Wolf, Muddy Waters, Willy Dixon and Sonny Boy Williamson on. One of the best albums you’re ever going to get hold of, if not the best.”

It was apt, perhaps, that Green superseded Clapton when the latter left John Mayall’s Bluesbreakers to form Cream, even if replacing ‘God’ was always going to be some task for the fatherly Mayall.

Decca’s blues aficionado and producer Mike Vernon recalled of his next booked session with John Mayall in late ’66, “I noticed an amplifier which I never saw before so I said, ‘Where’s Eric Clapton?’ Mayall answered, ‘He’s not with us any more, he left us a few weeks ago. Don’t worry, we got someone better…’ Then he introduced me to Peter Green.”

Green was still just 20 and made only a few 45s and one album, A Hard Road, in ’67, with Mayall but his year-long stay made his name. On the LP, he sang on his own The Same Way but The Supernatural, a Latin-flavoured instrumental in D minor, saw Green using thick, reverb-heavy sustain that signposted the supple phrasing and tones on Fleetwood Mac’s Albatross and Black Magic Woman. His cover of Freddie King’s The Stumble was as masterful as EC’s own King cover, Hideaway, on the better-known Beano Album.

Green was assured but never self-serving: it was the reason he named his own band, Fleetwood Mac, after his rhythm section. Recruiting slide specialist Jeremy Spencer (and, later, third lead player Danny Kirwan), Mac were soon going stratospheric: their self-titled blues debut LP – a top-five in 1968 – was followed by Mr Wonderful and Then Play On, in 1969. And with the likes of Oh Well (Parts 1 and 2), Man Of The World and The Green Manalishi (With The Two Prong Crown), Green had soon broken free of the blues template. It was one of the reasons he was admired on so many levels. Joe Perry told Guitar, “I’d never seen The Yardbirds or The Beatles… so I went to see Fleetwood Mac many times. I learnt a lot about blues guitar from Fleetwood Mac. Peter Green’s style and sound made a big impression on me.” Yet for Noel Gallagher, “I like him more for his songwriting. But he’s still, without question, the best British blues guitar player ever.” Drummer Mick Fleetwood knew that Mac were going to struggle to keep up with Green’s ideas: “Then Play On was as far as he could go. It was the first of the Brian Wilson-side of Peter Green.” Mac roadie Dennis Keane concurs, saying, “Peter wanted to be a total musician, not just a blues player. You’d go round to his gaff and he’d be playing all kinds of music, from classical to jazz to African bongo stuff. It killed Peter that [the folky] Oh Well Part 2 was never performed live. He thought that was the best part.”

Bad trip or not, Green was perhaps never destined to have a long outpouring of creativity. When he found himself with nothing more to say or no way to convey his emotion, he simply stopped. As he noted in 1983: “I’m not in Fleetwood Mac… and I didn’t want to be in it, particularly.”

Green’s wilderness years were punctuated with the occasional recording and various sightings, sometimes of dubious accuracy. Here was Green living in a squat; another time Green was ‘spotted’ with foot-long fingernails; and, the most bizarre, an East Anglian farmer known locally as ‘the Egg and Potato Man’ even tried to convince fans that he was Peter Green.

When Green himself re-emerged healthier in the 1990s with The Splinter Group, his recordings were more perfunctory rather than inspiring, yet his many admirers were simply delighted to see him playing live again, and he recorded The Robert Johnson Songbook album six years before Eric Clapton delivered his similar Me And Mr Johnson project. But the Les Paul was long gone, and Green never wanted it back. He instead tended to play a Gibson Howard Roberts Fusion jazzer and Fender Strats. The truth is, that fabled Green blues sound is all in those early FM recordings.

He’d notably played a Strat on Albatross but Green’s 1959 Les Paul – itself known as the Greeny Les Paul – is perhaps the most legendary of all 1959 sunbursts. Post Fleetwood Mac, Green famously sold it to Gary Moore and the late Irishman made the most of it. Yet even Moore’s tribute album Blues For Greeny (1995) simply highlights how there was much more to Green’s timbre than the hardware. But if you’re taking notes, Green used a 50-watt Marshall head in the days of The Supernatural; around Albatross, a Fender Twin. In later Mac days, he favoured an Orange GT120. He had pedals too, a Cry Baby wah and a Coloursound distortion, but rarely used them. Reverb was Green’s thing and, as roadie Dennis Keane recalled, “he could make a note distort just by over-plucking it. That’s how good he was. Total control.”

Green may forever be remembered as a victim of music’s excess but it’s best not to dwell on the cost of his muse but rather its value – and that will forever be priceless.