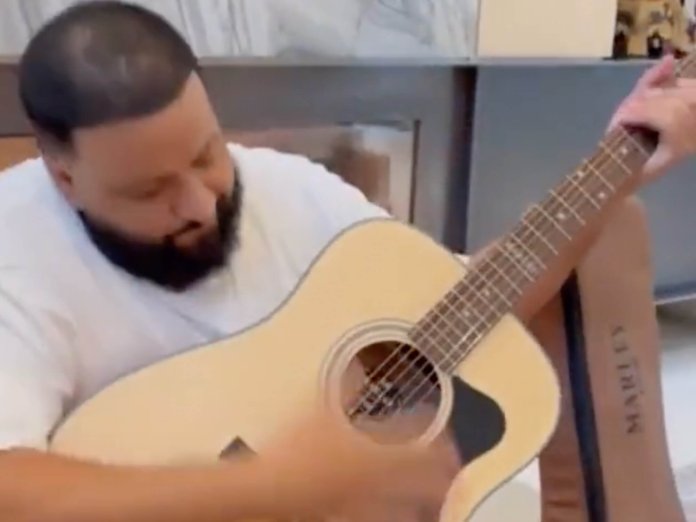 Footage of DJ and producer DJ Khaled playing his new Guild A-20 Marley acoustic has spread like wildfire across the internet this weekend, although perhaps not for the reason he intended.

The guitar, launched at the start of this month, was designed in collaboration with Bob Marley’s family. It was based on Marley’s personal Madeira A-20 that he used for songwriting at home.

In the video, DJ Khaled shows one of the instruments he was sent by either Guild or the Marley family. Precise details are hard to ascertain, as all official uploads have seemingly been scrubbed from the internet. The guitar arrived with a short note about its origins. While holding the acoustic guitar, Khaled requests his personal chef, Melissa Zuniga, read the note, which she does. “This guitar [Marley’s original] inspired songs that helped unite the world,” she reads. “And we hope it inspires you as well.”

DJ Khaled then demonstrates the guitar by beating it as if it owes him money. Not a single note is fretted as Khaled hammers all six of the slightly-out-of-tune strings. The cameraperson comes in for a close-up, unfortunately allowing for some even clearer audio.

i have died because this video has killed me pic.twitter.com/ISgQEw8Vqy

The performance does not sound like it’s coming from a man with multiple platinum-selling albums under his belt, but it is. While few internet users were expecting Khaled to strum out a note-perfect rendition of anything, the sheer confidence with which he carries himself as he beats at the strings has to be seen to be believed.

The video was seemingly uploaded by Khaled shortly after the guitar’s release. However, it had to be reuploaded before finding true virality. It was shared widely on Twitter over the weekend, garnering almost 600,000 views on the platform. It also hit the front pages of both the “/r/unexpected” and “/r/sadcringe” subreddits.

Reaction to the video has mainly focused on baffled disbelief that the video actually exists, and is real, and apparently not a joke.

The look at the camera is what did me in pic.twitter.com/EWKeF1iZHH

Me, age 7 with my Walmart guitar thinking I was playing “Through the Fire and Flames” https://t.co/5ZOvSSqiVC