The FBI's director has testified that there is no evidence for the theory Nugent espoused. 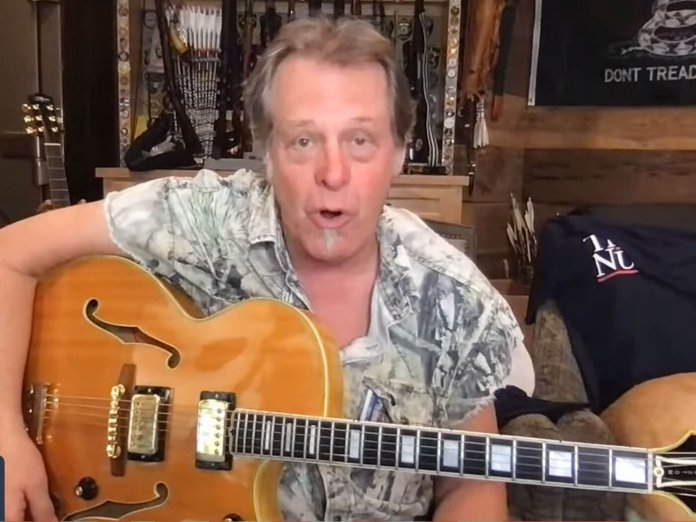 Rock guitarist and right-wing provocateur Ted Nugent has repeated a conspiracy theory that the violence that took place at January 2021’s Capitol riot was carried out by “Black Lives Matter and Antifa,” despite there being no evidence for the claim. There is far more evidence to suggest that the violence was sparked by supporters of Donald Trump, as well as followers of the baseless “QAnon” conspiracy.

On Monday, Nugent took to YouTube to say that: “We know that the 6 January event at the Capitol in Washington DC, those weren’t Trump supporters destroying stuff and breaking windows and being vandals. Those were Antifa and Black Lives Matter wearing Trump shirts and hats. I wanna be on record right now for that. Insurrection my ass.”

He added: “So let me make it clear: 6 January wasn’t an insurrection. Those were terrorists, like Black Lives Matter and Antifa dressed in Donald Trump shirts doing all the damage. The real Trump supporters were conservatives that believe in God, family, country, law and order trying to stop them.

“And I would ask… So why were the cops waving them in? And here’s the question America demands an answer to: who was the cop that shot the Navy vet? Was it Navy or Air Force? It doesn’t matter, ’cause warriors of the military are all heroes and warriors anyhow. I wanna know the cop’s name that shot the lady, and I wanna know what’s gonna happen to him.”

FBI director Christopher A. Wray has previously testified to the Senate Judiciary Committee that there was no evidence to support claims that Antifa, anarchists or provocateurs who didn’t support Trump were involved in the Capitol siege in which five people died.

Among those later arrested for their actions that day was Iced Earth guitarist John Schaffer, a “founding lifetime member” of the far-right Oath Keepers. Schaffer spoke on video to a journalist before the riot, threatening those who would seek to ratify the results of the 2020 US presidential elections.

An individual whose presence at the riots was hard to miss in the photographs was also the “QAnon Shaman”, real name Jake Angeli. He was at the time a supporter of Donald Trump, and has organised counter-protests against Black Lives Matter. His moniker comes from his support of QAnon, a theory that claims (based on anonymous internet messages and nothing else) a cabal of Satanic paedophile cannibals are running a secret global child sex trafficking ring. This same cabal also conspired against Donald Trump during his time in office.

QAnon adherents had a strong presence at the 6 January capitol riots, as did some prominent white supremacists and neo-Nazis, who were identified throughout means other than just their clothing. Many posted footage or images of themselves inside the building on their own social media channels. For example, neo-Nazi Baked Alaska (real name Tim Gionet) live-streamed himself taking part in the riot, and eventually swearing at police officers as he was dragged out of the Capitol building.

Nugent also recently stated in a live stream that “There is no systemic racism… we fixed that.” This was another controversial viewpoint, as there is also zero evidence to support the complete lack of race-based discrimination in the United States.