The single is taken from new album ‘Return of the Dream Canteen’, the band’s second double-album in six months. 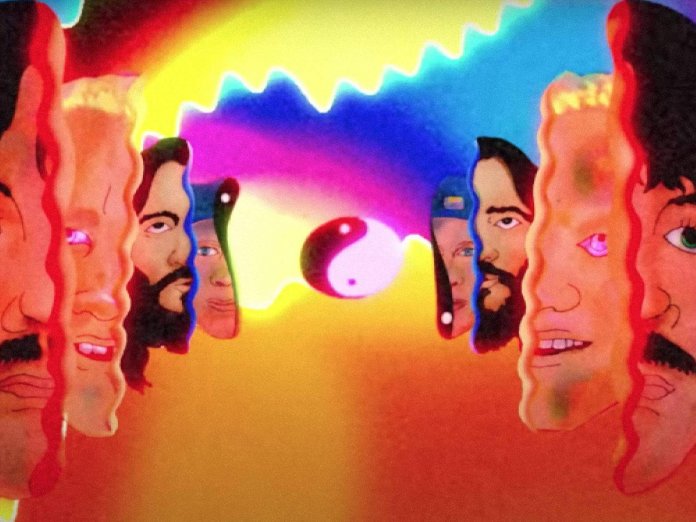 The video, directed by former Dum Dum Girl Malia James, combines colourful physical sets with psychedelic, retro-looking animations and surreal visual distortions. A tribute to the drug-infused aesthetics of the 1960s and the fish-eye peppered music videos of the 1990s, it’s a veritable trip with animations of the Chilis’ heads splitting open to reveal a morphing Ying Yang, kaleidoscopic patterns of instruments and body parts and some inventive outfits to match.

The upcoming Return of the Dream Canteen is set for release on October 14th and will be another double-length album, following April’s Unlimited Love. It was announced onstage by Kiedis and Flea part way through a recent Red Hot Chili Peppers show in Colorado.

“So, we put out a double record, a few months ago or something like that, and now we’ve got a brand new double record,” says Kiedis,  with Flea exclaiming, “that’s two double-fucking-albums!”

In a social media post the band wrote, “we went in search of ourselves as the band that we have somehow always been […]. Return Of The Dream Canteen is everything we are and ever dreamed of being.”

John Frusciante has also spoken about the upcoming record, telling Total Guitar in May that a surfeit of material led to the prolific output of songs.

“You know, I was ready to stop when we had, like, 20 – I felt like that was good enough,” Frusciante said. “But one thing led to another and somebody or other kept encouraging me to keep bringing in more songs. So, before we knew it, we had way more songs than we’d ever written for a record before.”

Watch the video for Tippa My Tongue: