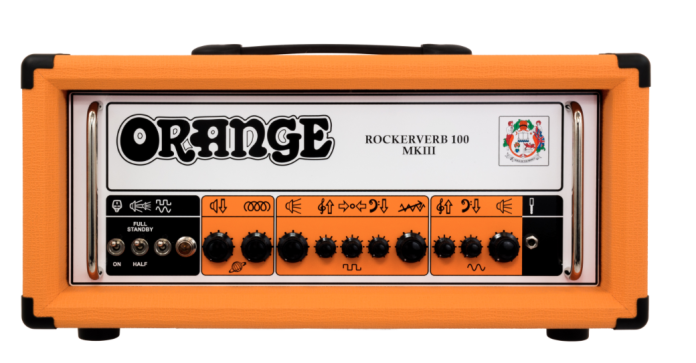 Press Release
Orange Amplification is proud to announce the launch of the third generation of its British built Rockerverb Series guitar amplifiers. This latest incarnation, the Orange Rockerverb MKIII, sees the most significant changes to the series to date, and is available in 50W and 100W head formats or as a 50W 2×12” combo – in its original top loading design. Bringing together over a decade of user feedback with numerous improvements to the iconic design, the new models are some of the finest sounding and most feature-laden amps the company has ever produced.

The highly versatile twin channel layout has been reworked, with a re-voiced non-master Clean Channel which now takes on a more ‘chimey’ nature. Combined with a richer and more usable valve driven spring reverb, the MKIII produces an abundance of classy, shimmering rhythm tones via a new two band EQ. The Dirty Channel now carries much more of a punch, whilst retaining all of the character which made the Rockerverb so popular. From edgy British overdrive, to ferocious riffing tones and full-on soaring leads – it’s all there!

Orange Rockerverb MKIII models have even more headroom but, in a first for the series, the latest version now features power scaling across the range. The 100W head can be tamed from full power to 70, 50 or 30W, whilst the 50W models can be switched down to half power.

For even greater flexibility, the MKIII also includes Orange’s ever-popular footswitchable Attenuator, allowing guitarists to push the output stage of the amplifier into breakup at any volume. Unlike a load box, Orange’s Attenuator design maintains the all-important relationship between the output transformer and the speaker. Even at ‘bedroom levels’, the playing response remains springy, immediate and inspiring. The footswitch feature adds another level of functionality, meaning the Attenuator can be defeated remotely for a clean boost to jump out of the mix in a live setting.

Whilst the previous version may have been an almost impossible act to follow, with a host of updates and refinements, the stunning MKIII is set to reaffirm the Rockerverb’s position as the rig of choice for touring and recording artists the world over.