The Tony Iommi Signature G-400 has been on display at this year’s Musikmesse, the beautiful guitar was designed by Tony working in conjunction with Epiphone luthiers and provides a distinctive instrument with a range of great features. 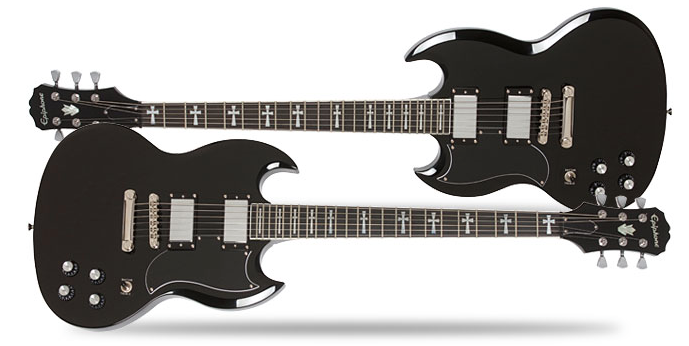 This year at Musikmesse 2015, Epiphone will host a special appearance by Tony Iommi, the legendary lead guitarist for Rock and Roll Hall of Fame legends Black Sabbath. Iommi will appear at the Epiphone Booth to sign autographs during the Musikmesse Tradeshow Friday, April 17, from 11am-12pm at Hall 4.0 Booth J60. And as a special treat for conference attendees, Epiphone will also preview the new Ltd. Ed. Tony Iommi Signature SG Custom.

Later this summer, Epiphone will formally announce the new Ltd. Ed. Tony Iommi Signature SG Custom, which will be Tony’s second signature guitar for Epiphone. It features the historic SG profile–now a Tony Iommi trademark–with a Mahogany body finished in beautiful gloss Ebony. The Mahogany neck has a 1960’s SlimTaper™ D- profile and a black graphite nut and the Ebony fingerboard has Pearloid “Cross” inlays with white binding and a Tony Iommi signature on the back of the headstock.

For his Ltd. Ed. signature SG, the “Godfather of Heavy Metal” chose Gibson USA’s Tony Iommi Signature Humbuckers in both the lead and rhythm positions. Production will be limited to 2,000 guitars and each will include a hand-signed Certificate of Authenticity along with a binder and photograph of Tony Iommi. An optional hard case is also available.

“This guitar sounds like I want it to sound on stage,” said Iommi. “I play it at home in the studio as well. It uses my signature pickups, which we worked on for quite a while over the years. It’s got a great fretboard with a really nice feel. And, it’s just a really classy looking guitar.”