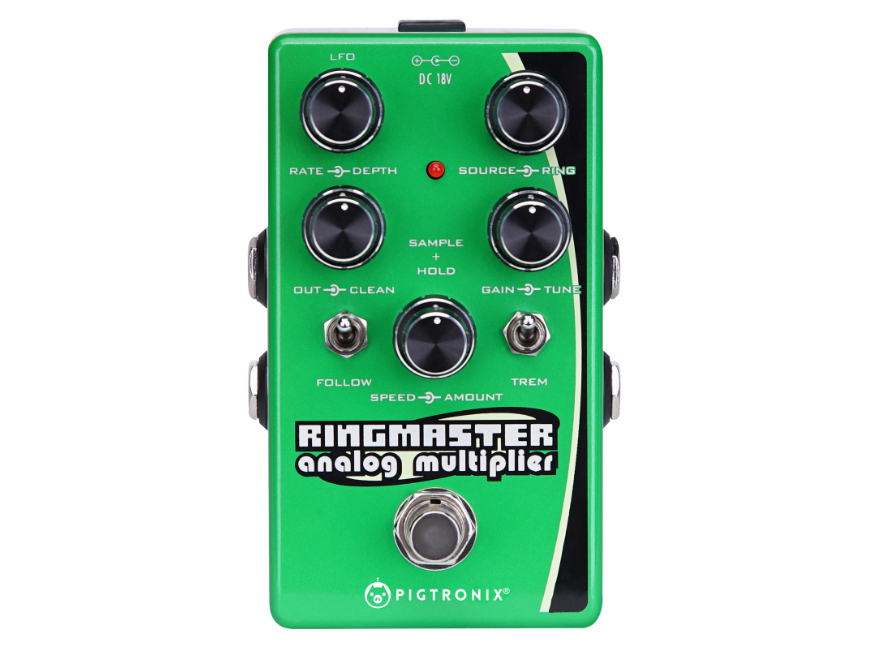 The new Pigtronix Analog Multiplier is more than the sum of its parts. It’s a ring modulator, harmonizer and tremolo rolled into one—and that’s just the tip of the iceberg. Here’s what else lurks below the surface:

This is a pitch-detection feature that modifies the carrier signal—an internally generated waveform—so that it equates to that of the guitar’s pitch. Unlike typical ring modulators, which use static frequencies, the Analog Multiplier boasts an ‘intelligent’ version that tracks your playing and uses the changing pitches of your notes to generate more musical-sounding modulation effects.

Unlike many other ring modulators, this one lets you modify both the carrier wave and your instrument signal before they’re multiplied together. You can tweak the “Source” knob to to blend your clean signal with a pitch-following square wave, and you can turn the “Gain” knob to take the carrier wave into saturated territory. The carrier wave can even be modulated via an onboard LFO or Sample/Hold function generators.

Pigtronix’s pitch-tracking technology allows the carrier signal to follow your notes in real-time, resulting in musical harmonizer effects. There’s even a bonkers ‘tremolo’ feature you can add onto this: It divides the rate of the carrier oscillator down into the LFO range, effectively creating a trem effect. And when you combine this with the “Follow” function, the tremolo will automatically speed up as you play higher notes.

The Ringmaster lists for $249. For more information, visit pigtronix.com.