It’s no secret that John Mayer’s main guitar on tour with Dead & Company has been the PRS Super Eagle, launched last spring. 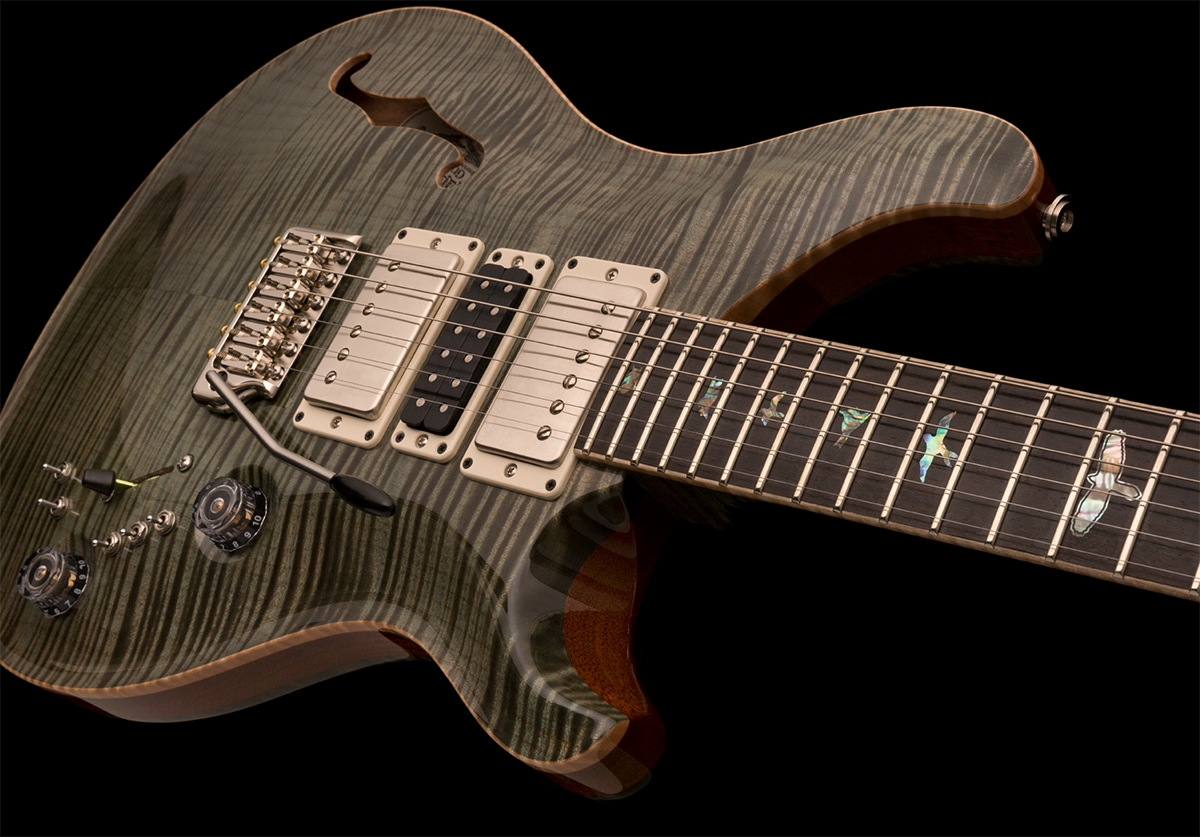 During the 2016 tour, PRS made Mayer a second version of that instrument with some updated woods and aesthetic appointments. Mayer played the Super Eagle II on the very last show of the 2016 tour and is continuing to play it for Dead & Company’s 2017 summer tour.

PRS and Mayer are excited to offer this new version, the Super Eagle II, to fans and collectors.

“Just like with the first edition Super Eagle, you’re literally getting the same guitar that is in John’s rig. It’s been an honor to help create a tool that John can use to work with Dead & Company and beyond,” – Paul Reed Smith

Some of the specifications Mayer and Smith collaborated on for this special run of instruments include a longer (for PRS) scale length of 25.375”, specially-wound 58/15 JM treble and bass pickups with a specially-wound Narrowfield JM pickup in the middle position (with three individual coil-tap mini-switches), a JCF Audio preamp with treble boost, as well as a hand-signed sticker in the f-hole of the guitar that was designed by Mayer’s friend David Smith (who also designed the cover art for Mayer’s 2012 “Born and Raised” album).

The pickups deliver a bright, clear tone that has been heard in venues across the USA in Mayer’s recent performances with Dead & Company.

Some new woods and aesthetic choices were also selected for the Super Eagle II, including a one piece Private Stock curly maple back, African blackwood fingerboard and headstock veneer, paua birds and a green ripple abalone 12th fret violin bird and Private Stock eagle, as well as a new color: Hemp Green.

The Private Stock Super Eagle II is a highly-sophisticated instrument that at once reveres the history of guitar-making and guitar tone but pushes the boundaries of materials, design, and craftsmanship.

The Private Stock Super Eagle II will be limited to 120 instruments.

Electronics: 58/15 JM treble and bass pickups with a Narrowfield JM in the middle position. One volume and one tone control with 5-way blade pickup switch, three mini coil tap switches (one for each pickup), and a JCF Audio preamp with treble boost.

Gen III Tremolo
Rest assured, the Gen III trem functions in all the same ways as the PRS patented tremolo system always has. As always, the bridge is machined brass, a metal that rings beautifully. The block, intonation screws, height-adjustment screws, and the string slots on the saddles are all left un-plated for increased sustain and fidelity of tone.

A. The mounting screw holes are countersunk from under- neath, creating a knife-edge set-up that ensures the bridge will return to pitch after use.

B. The bridge’s sidewalls create a pocket that keeps the six individually adjustable saddles from moving sideways, thereby eliminating another traditional cause of tuning instability.

C. The saddles feature a compound radius so that the string breaks across the saddle at the optimum angle for contact and vibration transfer through the bridge. The Private Stock Gen III Trem also features locking saddles. These saddles hold the ball ends in place preventing any movement in the block and further ensuring the guitar returns to pitch after use.

D. The tremolo arm is unthreaded and features a small set screw that allows the player to customize the feel of the arm and find a comfortable playing position.
The Gen III trem also has a few notable updates that further support the fidelity of the guitar’s tone and maximize sustain.

E. The mounting screws have been redesigned with larger thread and a larger custom head. This added mass creates more contact from the screw to the bridge and the guitar’s body, resulting in greater sustain.

F. Grooves have been added to the bridge plate. The grooves are radiused to match the radius of the height adjustment screws, again so there is more contact and a better fit.

For more information head over to prsguitars.com.