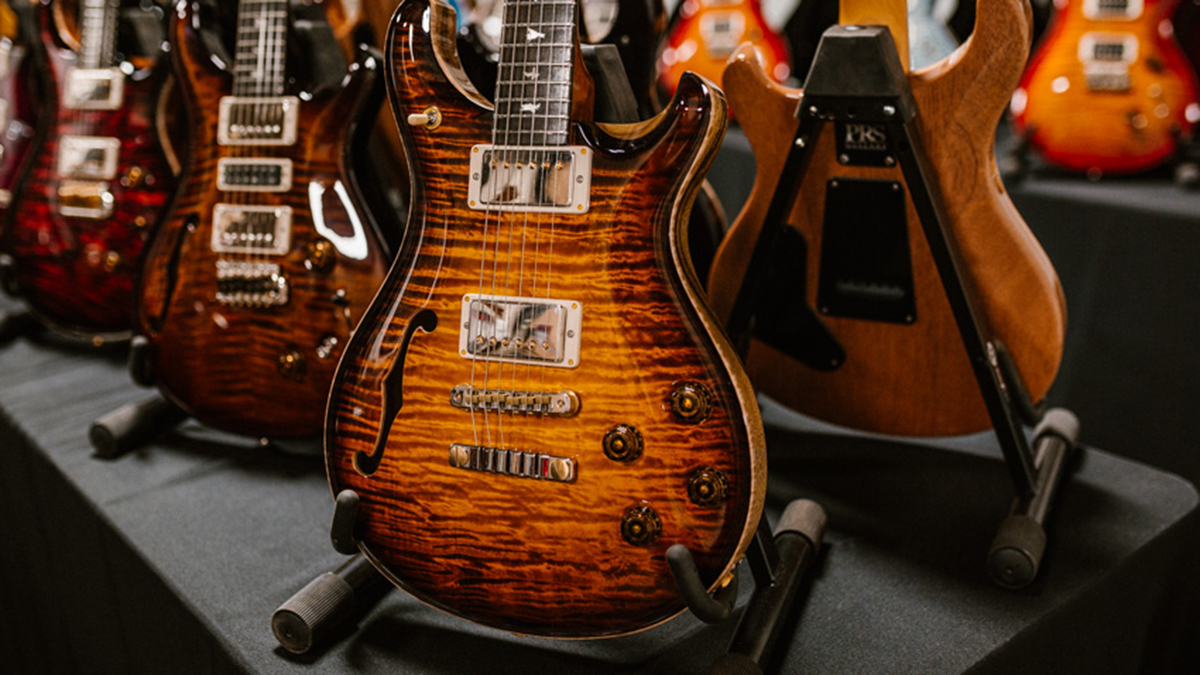 This semi-hollow is based on PRS’ Custom 22—it has a carved maple top, mahogany back and neck, rosewood fretboard, and the hardware found on the latter guitar. But beyond that, the Special Semi-hollow is completely unrecognizable.

It has its semi-hollow construction and three-pickup configuration to thank for that. Two humbuckers—PRS’ 58/15 MTs—sit at the neck and bridge, while a PRS Narrowfield occupies the middle position. The humbuckers are both coil-split, with their design compensating for volume drop while in single-coil mode. And the Narrowfield pup has the “bite of a single-coil, without the hum but with plenty of clarity and punch,” PRS said.

There are about 20 finishes to choose from, too, and they all have that delicious carved figured maple top.

Check it out here:

These two instruments have all the good looks and charm of the McCarty 594, but in a semi-hollow package. The only difference between these two McCarty 594s is, as their names suggest, their body shape.

Both semi-hollows, which are available in 20 finishes apiece, will only be available until August 31.

Listen to the Single-cut here:

Surely an axe that bears the name of its master luthier has to be something special. And Paul’s Guitar certainly is. Its familiar looks aside, the guitar is a refined six-string that has pickups and electronics never before seen on a PRS instrument.

The TCI pickups here are humbuckers, but with the ability to switch to single-coils. Convincingly so. Through a pair of mini-toggle switches on the guitar, you can transform the fat-sounding humbuckers into glassy, chiming, vintage-leaning single-coils. We’re not sure if it’s just a simple coil-split—probably not—but those single-coils sound stunning.

Elsewhere on Paul’s Guitar, you’ll find a carved figured maple top, mahogany body and neck, Ziricote fretboard, and the new ‘brushstroke’ bird inlays. It only comes in a Black Gold Nitro finish, and just 100 models will be available.

Limited to a mere 80 guitars worldwide, the Graveyard Limited has an admittedly grim provenance. The curled maple tops used in the instrument come from trees near a cemetary on the East Coast whose headstones date back to the late 19th century. These trees are estimated to be more than 120 years old, and the wood they provided have a “natural iridescence” to them, according to PRS.

It isn’t the only premium tonewood on the Graveyard Limited. It has a Madagascar rosewood fretboard, curly maple binding, a figured mahogany Pattern Vintage neck, and, the most pedestrian of the lot, a mahogany body. Even the headstock and fretboard inlays are made of solid-shell red abalone. Finally, two humbuckers, a 58/15 at the bridge and 58/15 LT at the neck, give the guitar heft and versatility.

The Graveyard Limited is only available in a Nitro Honey Gold with Dark Cherry Smoked Burst finish.

For more info, check out prsguitars.com.