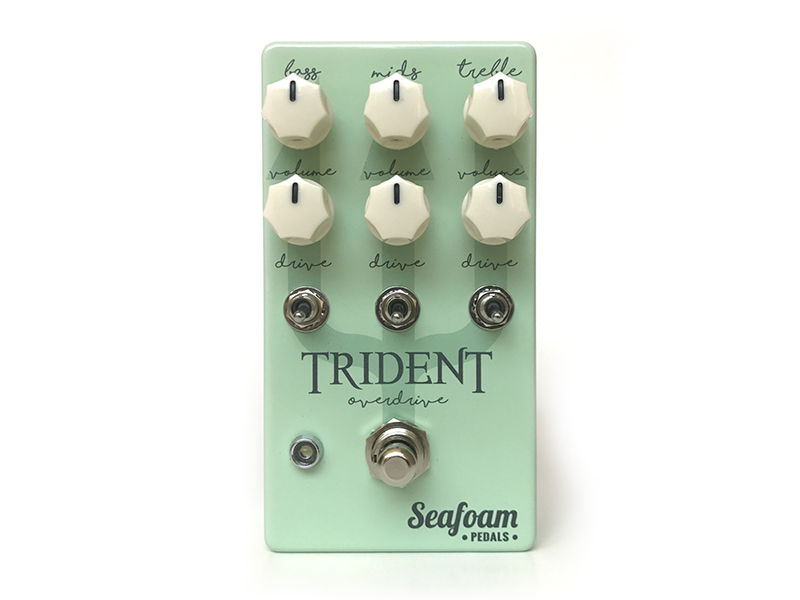 Ever wanted to add grit to your bass frequencies, boost the mids but keep your highs clear and pristine? It’s not exactly easy. But the Trident Overdrive is an OD/three-band EQ that lets you do just that.

Seafoam Pedals’ newest stompbox, while based on the Tube Screamer, is nothing at all like the classic unit. You’ll notice three columns of knobs and switches on the slim-sized pedal. Each column controls an individual TS circuit, which is pegged to either bass, middle or treble frequencies. So for each frequency band, you can dial in volume and gain to taste. Adding more volume yields up to 15 dB of boost, while the “Gain” knobs span from a clean sparkle to a saturated distortion.

Which means if you’re after a fatter sound with rasping highs, you can clean boost the bass band by keeping “Volume” high and “Gain” low, then add more gain to the treble band. Or for a throatier roar, dial back the “Gain” on both bass and treble but crank it up on the middle band. The possibilities are almost endless.

And those three mini toggle switches? They’re there to change the affected frequency bands for even more versatility. The bass switch focuses on either 300Hz and below or 150Hz and below; the treble switch on 800Hz and above or 1kHz and above; and the mids switch lets you pick between 300 to 800Hz, 150 to 800Hz, and 300Hz to 1kHz.

Listen to a demo of the pedal here:

The Trident Overdrive retails for $250. For more info, check out seafoampedals.com.