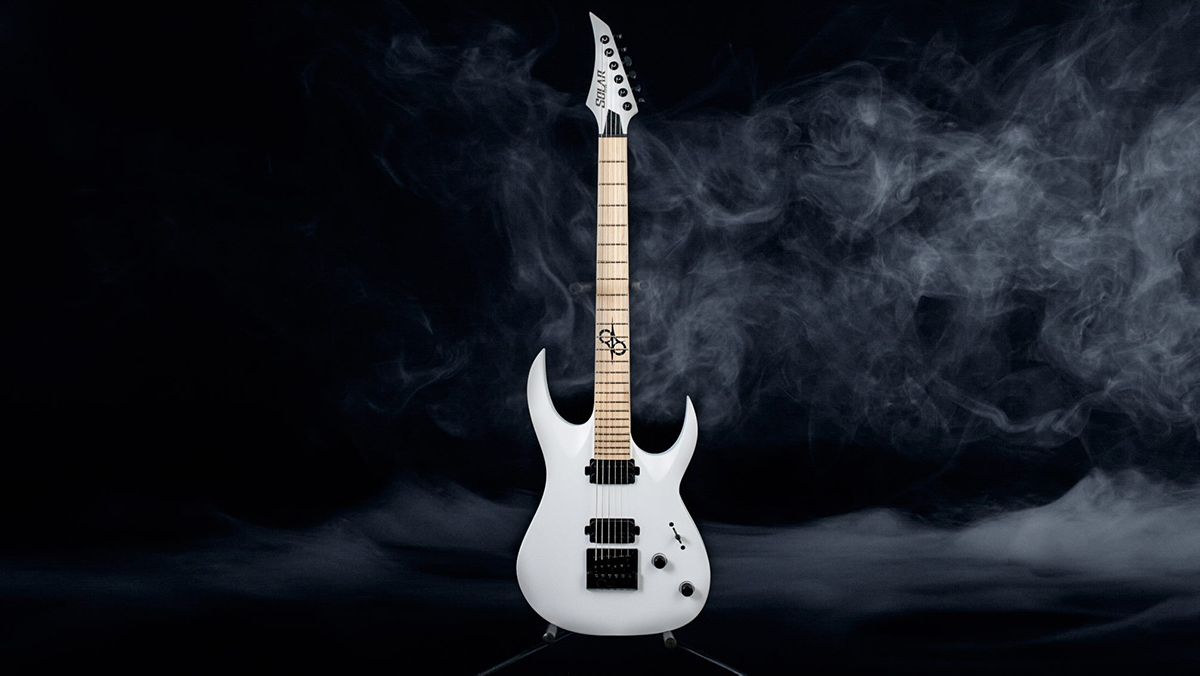 These include Super Strats, Explorer-style shapes, as well as left-handed and seven-string models. Check them out here:

The Super Strat takes the ‘stealth’ aesthetic and runs with it: It has all-black hardware, an ebony fretboard, glow-in-the-dark side dots, and a Carbon Black Matte finish on an alder body. Two Seymour Duncan Solar humbuckers—designed specifically for Englund’s brand—power the six-string, while an EverTune bridge ensures tuning stability.

Think of this as the angelic version of the previous guitar. It’s identical in every way save for the White Matte finish and maple fretboard.

Lefties can get in on the Super Strat action with this left-handed model. However, it’s only available in a Trans Blue Matte finish, which shows off the grain of its swamp ash body.

The A2.7 is a blazing red beauty that’s similar to the A1.6ETC model with a few crucial differences: It has seven strings, a stock fixed bridge, and a swamp ash body.

And the A.27 LH is a left-handed version of the guitar, identical in every other way.

“E” probably stands for “Explorer”—and this Solar model updates the classic Gibson shape with sharper points, beveled armrests, and a wicked-looking headstock. The E1.6ETC is as stealthy as the A1.6ETC, and shares the same tonewoods, hardware and pickups. The biggest difference between the two is the scale length: This model has a shorter, Gibson-spec’ed 24.75-inch length.

A more affordable version of the former, the E2.6 swaps out the EverTune bridge for a Tune-o-matic-style one, alder for swamp ash, and the killer all-black finish for a bright, Trans Blood Red Matte sheen.

This “S” model bears a sleeker, ‘Ibanez-ier’ body shape as compared to the “A” guitars. Gone are the scooped cutaways, while white headstock, neck and body bindings rim the guitar’s all-black finish.

It’s still very much a Super Strat, though. The S1.6ETC is pretty much identical to the A1.6ETC, features-, hardware- and electronics-wise.

For more information, check out solar-guitars.com.