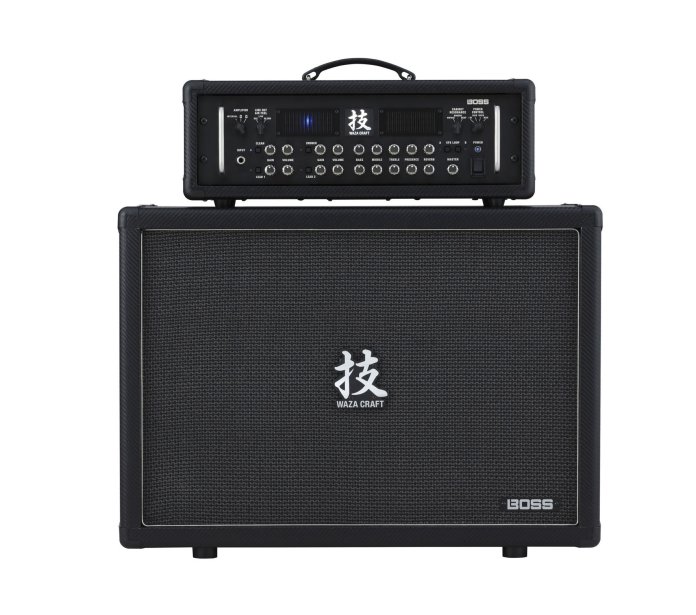 BOSS announces the availability of the Waza Amp, a professional guitar amplifier with companion speaker cabinets. The 150-watt Waza Amp Head comes standard with the ultimate high-gain tone that’s been sought after by rock guitarists for decades. Driven by Tube Logic, the amp provides four independent channels, custom voicing options via two Tone Capsules, and many other advanced features. One Tone Capsule is built into the Waza Amp Head that features the legendary brown sound, and there’s a user port for adding an optional second Tone Capsule for future expansion.

The Japanese term “Waza” embodies the highest level of art and technique, achieved only through years of tireless dedication to one’s craft. Like the acclaimed Waza Craft pedal series, the Waza amp and cabinet proudly carry this Waza name and symbol to represent the pinnacle of BOSS’ technical knowledge, design wisdom and master craftsmanship.
First introduced with the Roland Blues Cube amplifier series, the Tube Logic design has received praise from top players around the world for its rich, responsive and authentic tube tone. In the Waza Amp Head, Tube Logic has been used to create a highly versatile multi-channel guitar amp for pro players, with a special focus on the ultimate high-gain “modded” tone.

The Waza Amp Head features four independent channels: Clean, Crunch, Lead 1, and Lead 2. Clean and Crunch share one four-band EQ, while Lead 1 and Lead 2 share a second four-band EQ. All amplifier channels can be instantly re-voiced with the three-way Amplifier selector knob for amp character variation: legendary rock tone in the Internal position, a pre-installed “Waza Brown Sound” Tone Capsule in the Amplifier A position, and an optional Amplifier B Tone Capsule slot inside the amp for future expansion.

Armed with 150 watts of power, the Waza Amp Head has ample volume for big stages and high-end touring applications. The amp also includes a variable power control with Max, 100 W, 50 W and 1 W settings, enabling users to get cranked amp tones at lower volumes. Unlike simple power attenuators that can affect an amp’s tone and feel, the Waza Amp Head’s power control works directly with the internal power supply to ensure great performance at every setting.

The amp’s rear panel includes two effects loops, an XLR line output, and USB for direct recording to a computer. Three speaker outputs provide connection to the Waza Amp Cabinet 412 and 212, or other speaker cabs. There’s also a jack for connecting an included foot controller for channel switching and effects loop selection. Finally, a MIDI input allows the amp to be controlled via a MIDI switching device such as the BOSS ES-8 or ES-5.
The companion Waza Amp Cabinet 412 and 212 provide optimized performance with custom-made 12-inch speakers and heavy-duty plywood construction. It’s also possible to stack two Cabinets (Cabinet 212 only) to achieve a classic look and enhanced sound projection while performing.

“We choose to focus on pushing the art forward” Paul Reed Smith on pandemics, progress and the importance of PRS’s 35th anniversary