#SummerNAMM2016: Taylor has announced a redesign of its 700 Series, as well as the addition of the new 800 Deluxe Series and Rosewood 400 Series models to its range. The American acoustic guitar manufacturer has also debuted the Special Edition Quilted Maple 214ce-QM Deluxe. Check out all the details below: Taylor Guitars continues its pursuit […] 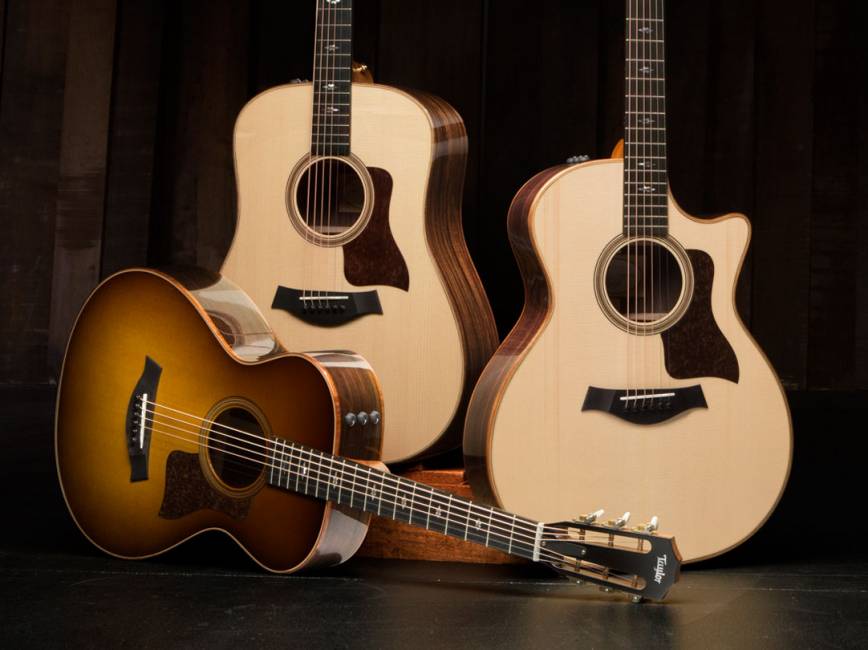 #SummerNAMM2016: Taylor has announced a redesign of its 700 Series, as well as the addition of the new 800 Deluxe Series and Rosewood 400 Series models to its range. The American acoustic guitar manufacturer has also debuted the Special Edition Quilted Maple 214ce-QM Deluxe. Check out all the details below:

Taylor Guitars continues its pursuit of advancing modern acoustic guitar design with the Summer NAMM launch of the company’s redesigned 700 Series, the addition of new rosewood models to the 400 Series, as well as a new “Deluxe” class of 800 Series guitars.
“Here at Taylor Guitars, we are deeply committed to making the best instruments we can in order to inspire musicians and their ongoing musical pursuits,” said Andy Powers, Master Guitar Designer, Taylor Guitars. “This summer, we are thrilled to introduce our latest collection of advanced instruments, and we hope they spark fresh musical experiences.”

Taylor’s design team has been hard at work redesigning the company’s rosewood/spruce 700 Series, one of the few remaining guitar classes in the Taylor acoustic line that hasn’t undergone a makeover in the past couple of years. The redesigned 700 Series features several tonal enhancements including Lutz spruce tops (provides a higher volume ceiling), Performance bracing and protein glue.

With the new 700 Series, players can expect all of rosewood’s musical richness, anchored by a strong fundamental focus that gives back whatever the player puts into the guitar and making these instruments great for the stage.

Aesthetically, the new 700 Series guitars are both rootsy and refined with wood-rich details and other touches that artfully showcase Taylor’s high-end craftsmanship. 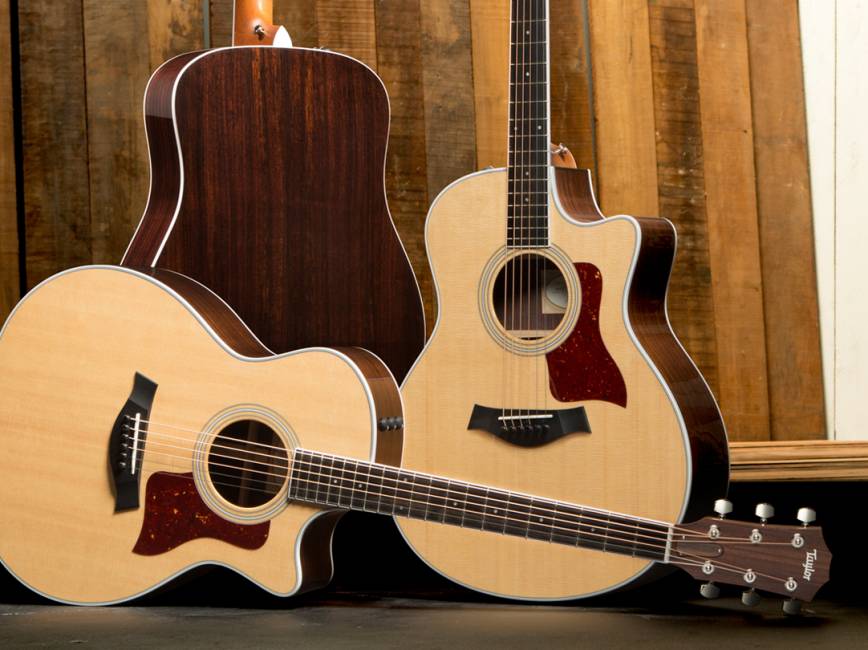 In response to the popularity of rosewood on other guitar models, the 400 Series will now feature rosewood editions with an “R” in the model name (i.e. 414ce-R). The new rosewood models include the same mix and appointments as ovangkol counterparts, also paired with a Sitka spruce top. One spec change for both Dreadnought models: The standard nut width is 1-11/16 inches (1-3/4 inch nut width is available as an option). Featured models include the 410e-R, 414ce-R and the 416ce-R. 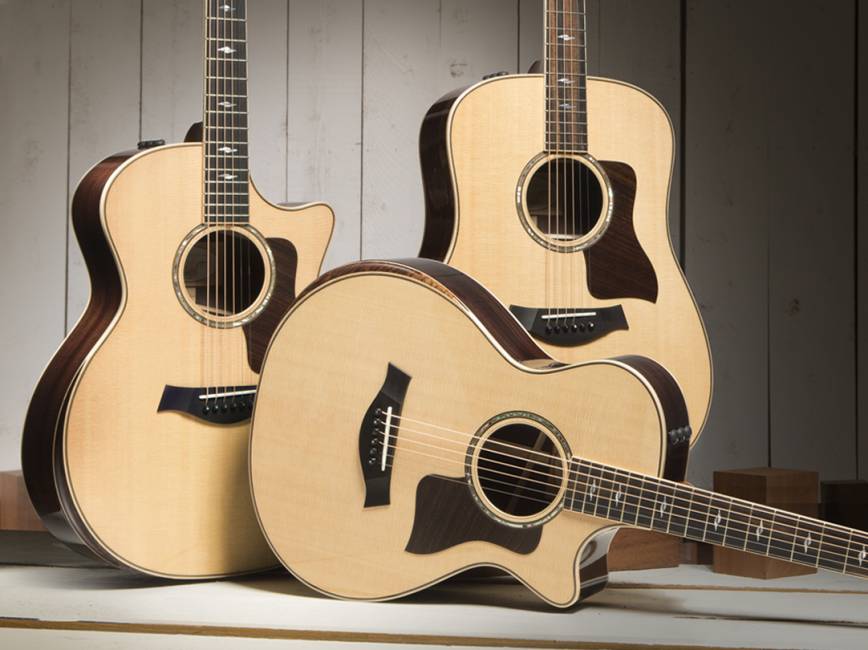 Taylor also announced a new “Deluxe” class of 800 Series guitars that boast three additional ultra-premium features: a new radius armrest, Adirondack spruce bracing, and Gotoh chrome tuners. The maple radius armrest incorporates a beautifully contoured rosewood insert, has rosewood top edge trim, and is narrower and more rounded than the beveled armrest featured on the 900/Presentation Series. Otherwise, the 800 Deluxe models sport all of the same tone-enhancing and other aesthetic features of the standard 800 Series, which was redesigned in 2014. 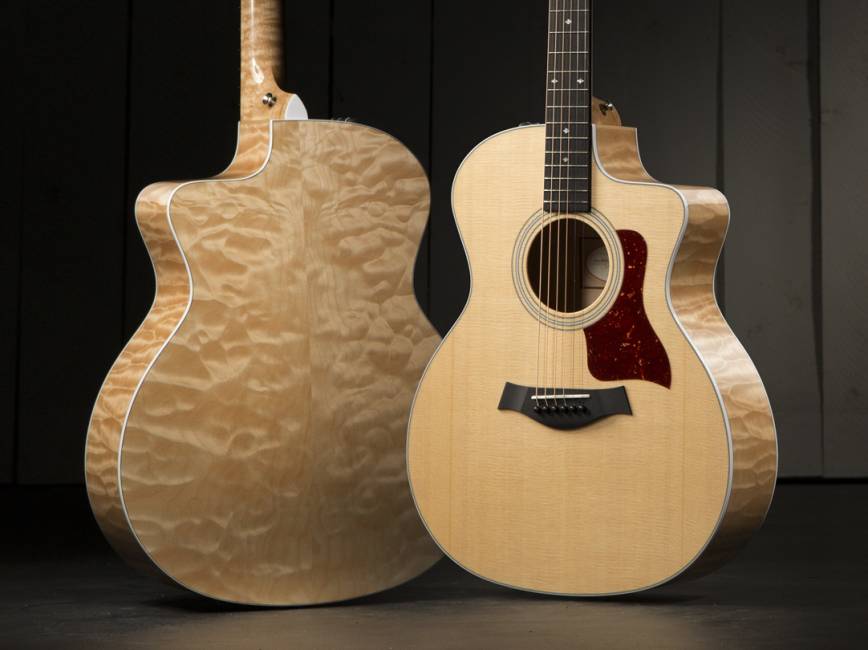 Gorgeous quilted maple is the star of this new guitar. Layered-wood back/side construction features outer and inner veneers of quilted maple, a central core of poplar, and a solid Sitka spruce top. The Hard Rock maple neck adds a matching blonde color tone to the natural-finish maple/spruce body. This new edition comes as a Venetian cutaway with ES2 electronics and a Taylor hardshell case.