​Taylor Guitars​’ revolutionary new ​V-Class bracing​ is now available across all series made at the company’s El Cajon (U.S.) factory. 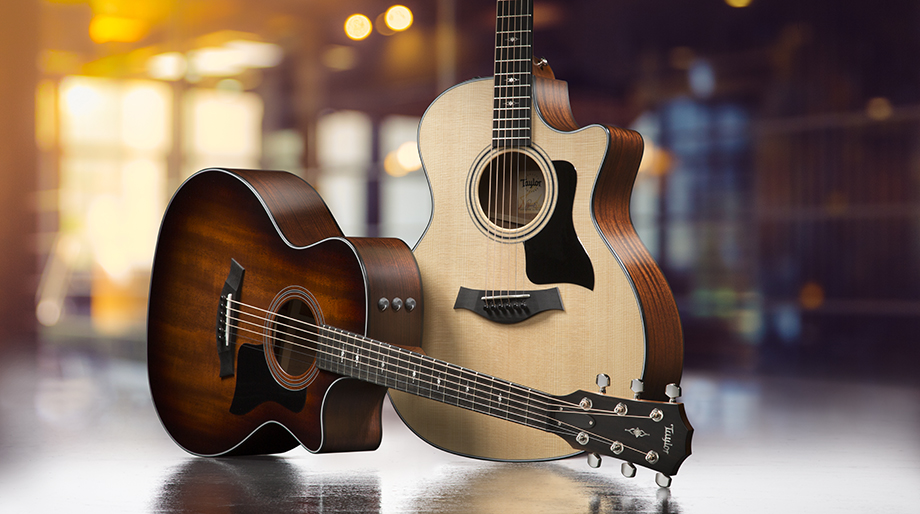 V-Class bracing, which debuted earlier this year winning multiple awards including ​‘Best In Show’ at 2018 Winter NAMM​, is a groundbreaking, award winning innovation in acoustic sound that responds with greater musicality and harmonic agreement. By introducing a more orderly vibration to the guitar’s top, V-Class bolsters the volume and sustain to offer players a more dynamic voice to explore, while also resolving the minor intonation issues that players have long had to contend with.

“​We’re thrilled to offer our new bracing system within each guitar series we make here at the El Cajon factory,” says Taylor Master Guitar Designer Andy Powers. “​V-Class has opened up a whole new path of musical possibilities for the acoustic guitar, and we’re excited to get these instruments in the hands of all kinds of players.”

The tonal improvements of V-Class provide a purer platform of sound that magnifies the tonal characteristics of each different wood pairing. “This design makes the tonewood pairings extra vibrant,” Andy says. “You hear a more distinct version of each wood’s sonic flavor.”

The new V-Class 300 and 400 Series models also feature inlay updates, including the addition of a peghead inlay to help identify them as V-Class guitars. 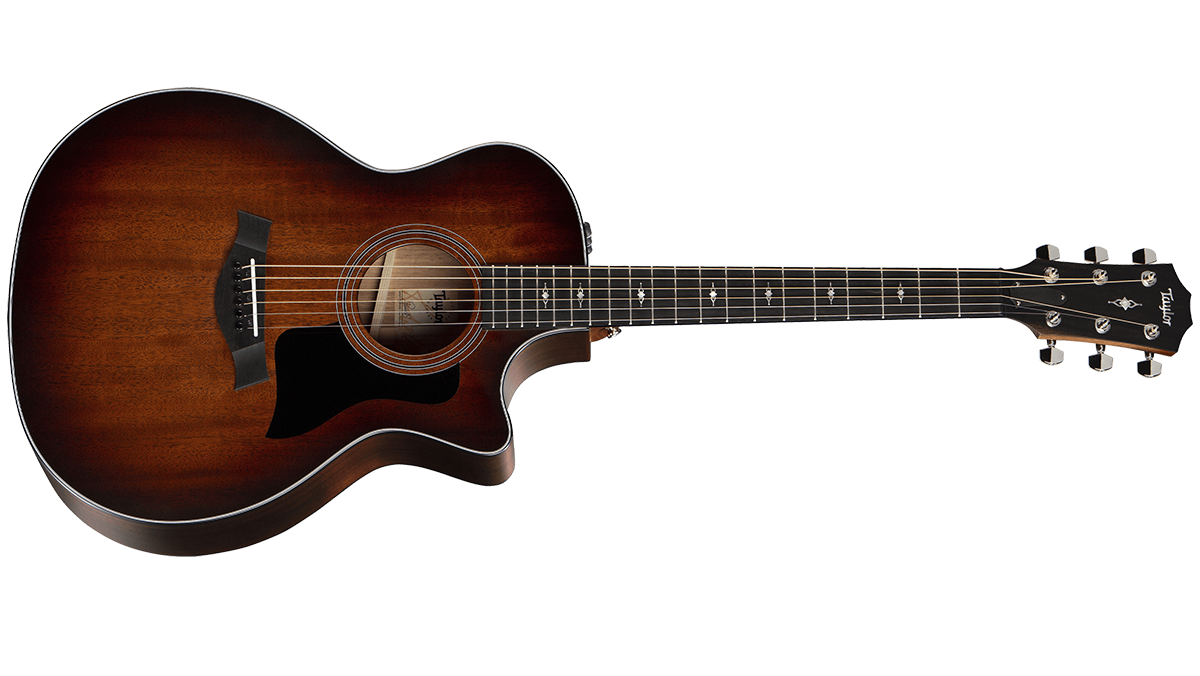 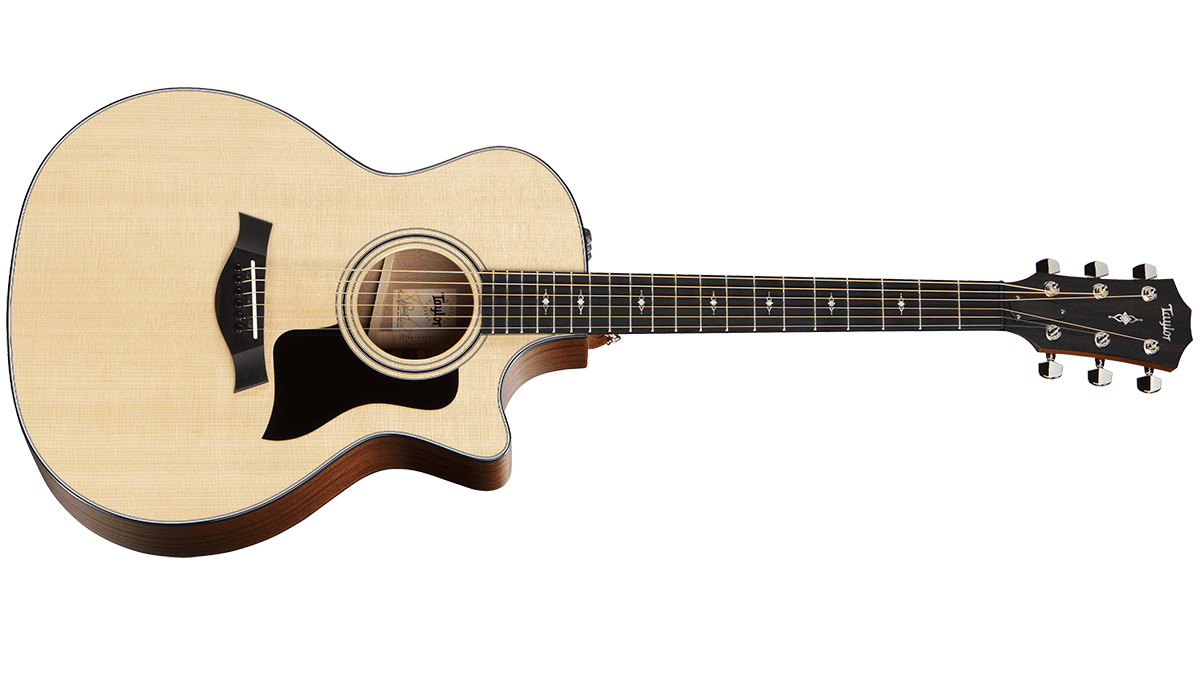 Within Taylor’s 300 Series, players have a choice of two different V-Class Grand Auditorium models: the 314ce​, featuring a solid Sitka spruce top with solid sapele back and sides, and the ​324ce​, which pairs a solid mahogany top with Tasmanian blackwood back and sides. Each model has been a popular choice among players, serving as a versatile workhorse that performs reliably well in the practice room, recording studio, and on stage. Powered by V-Class, players will love the enhanced tonal properties, especially the power and consistency of the notes along the entire fretboard.

The sapele/spruce 314ce responds with a balanced and articulate blend of top-end brightness, midrange fullness, and low-end warmth that accommodates an array of playing styles. Appointments include black binding, new Gemstone fretboard/peghead inlays in Italian acrylic, and satin-finish back and sides with a gloss top. The guitar also features a Venetian cutaway and Taylor’s proprietary ES2 electronics. The guitar ships in a deluxe hardshell case. Street Price: $1,999

The cutaway Grand Auditorium 324ce sports a shaded edgeburst mahogany top that projects a rootsy vibe, with plenty of sonic magic under the hood as well. The enhanced volume, sustain and projection of V-Class bracing bring out even more of the natural midrange focus of its Tasmanian blackwood back and sides. While a hardwood mahogany top produces a natural compression that evens out the response across the tonal spectrum, the V-Class design boosts the dynamic range, especially in the upper register. Featured appointments include black binding with a matching black pickguard, Gemstone fretboard/peghead inlays in Italian acrylic, and a satin finish that lends to the dusky vintage aesthetic appeal. The guitar ships with ES2 electronics in a deluxe hardshell case. Street Price: $2,199 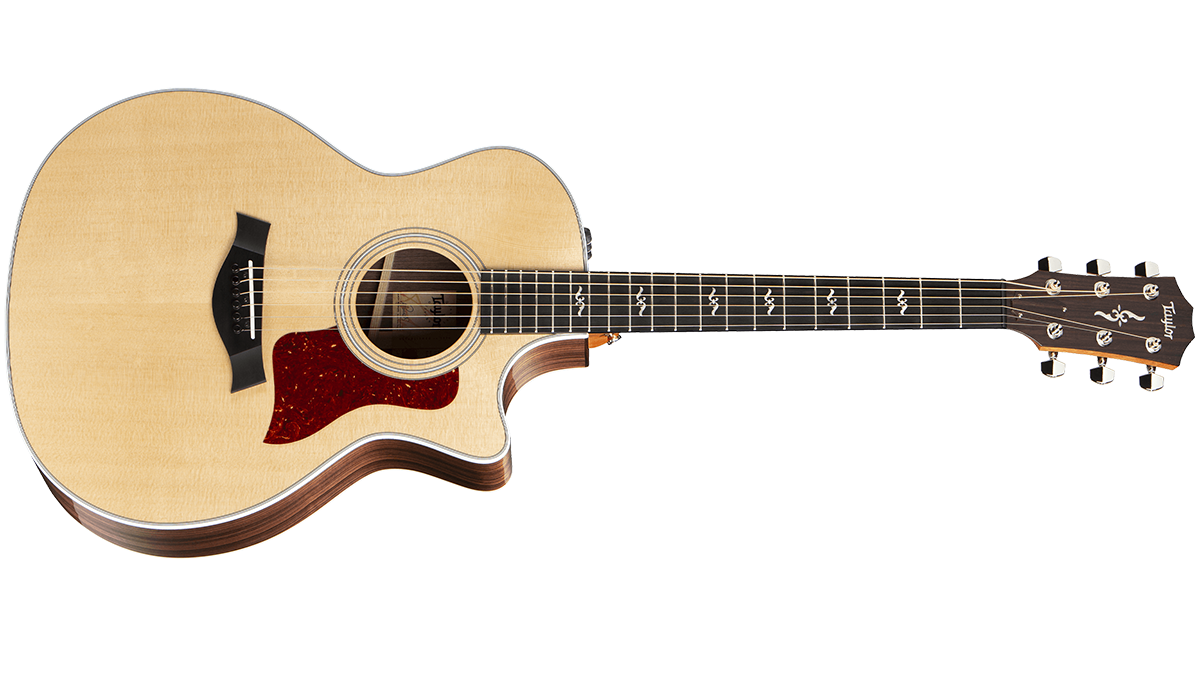 Taylor’s cutaway acoustic/electric Grand Auditorium ​414ce​ has long been a staple of gigging and recreational players thanks to its musical versatility and clean, workmanlike aesthetic. Crafted with back and sides of solid African ovangkol and a solid Sitka spruce top, the V-Class 414ce serves up a mix of powerful midrange frequencies, strong, clear treble notes, and deep yet balanced lows, making this a superb all-around guitar. Fingerpickers, flatpickers and strummers each will find something to love here. Appointments include crisp white binding, Italian acrylic Small Diamond fretboard inlays with an Engraved Diamond peghead inlay, and proprietary ES2 electronics. The guitar ships in a deluxe hardshell case. Street Price: $2,399

The ​414ce-R​ is another popular cutaway Grand Auditorium, thanks in part to the classic wood pairing of solid rosewood and Sitka spruce. Powered by V-Class bracing, rosewood’s full-spectrum voice, known for its rich overtones, takes on an even more pleasing high-fidelity sound that translates into a more expressive response. It makes a fantastic guitar for virtually any application. The appointments strike a tasteful balance between style and restraint, featuring white binding, Renaissance fretboard/peghead inlays in Italian acrylic, and a full-gloss body. The guitar ships with Taylor ES2 electronics in a deluxe hardshell case. Street Price: $2,599

Taylor also released a suite of V-Class Grand Auditorium guitars in late spring, ranging from its 500 Series through 800 Deluxe Series. 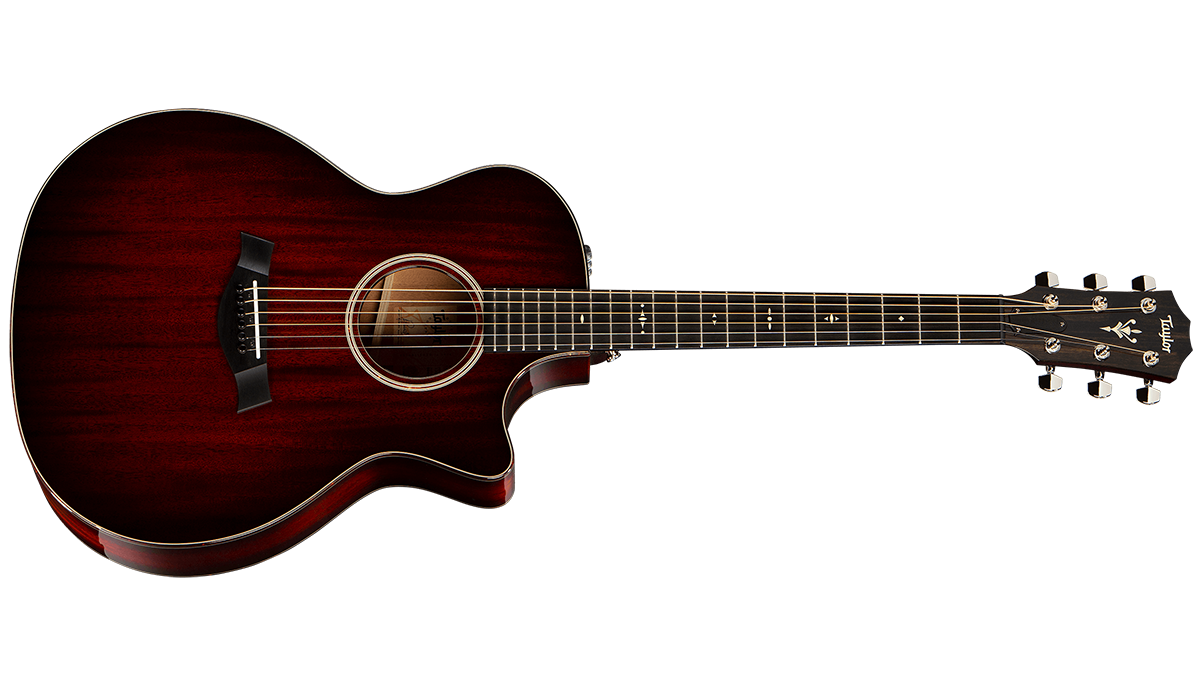 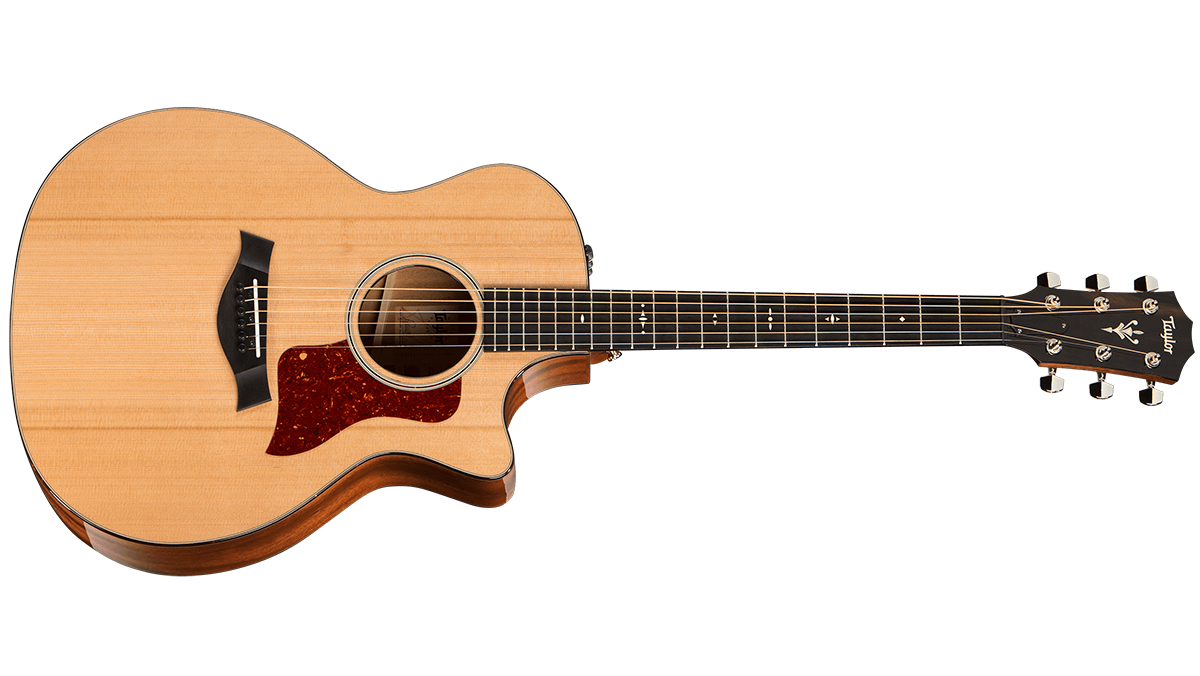 With the addition of V-Class bracing, the mahogany/cedar ​514ce​ is undeniably one of the most dynamic cedar-top guitars around. Mahogany’s signature dry, focused tonal qualities now boast extra definition and color, while cedar’s characteristic warmth, overtone complexity, and friendly response to a soft touch are enhanced by greater clarity and volume. Thanks to the guitar’s additional headroom, this makes an enticing cedar-top guitar for players with a stronger strumming attack. Street Price: $2,799

The all-mahogany ​524ce​ yields a naturally compressed, balanced tone, accentuated by the hardwood mahogany top. With V-Class bracing, the guitar produces wider dynamic range, a stronger midrange punch, and a more harmonically balanced tone, most noticeably in the guitar’s upper register. Together with the other sonic improvements of the V-Class design, this all-hog acoustic offers players a fresh dimension of versatility that will inspire new creative exploration. Street Price: $2,899

Maple’s sonic transparency lends itself to versatility, and with V-Class bracing, Taylor’s ​614ce​ is more player-reflective than ever. It can sound bright or warm, and with the increased power and sustain of the notes, players have incredible expressive range at their fingertips. Whether used for strumming or fingerstyle, jazz arrangements or alternate tunings, players will appreciate the responsiveness to their technique. The icing on the cake is the torrefied Sitka spruce top, which helps enhance the touch sensitivity with a more open, played-in sound. Street Price: $3,499 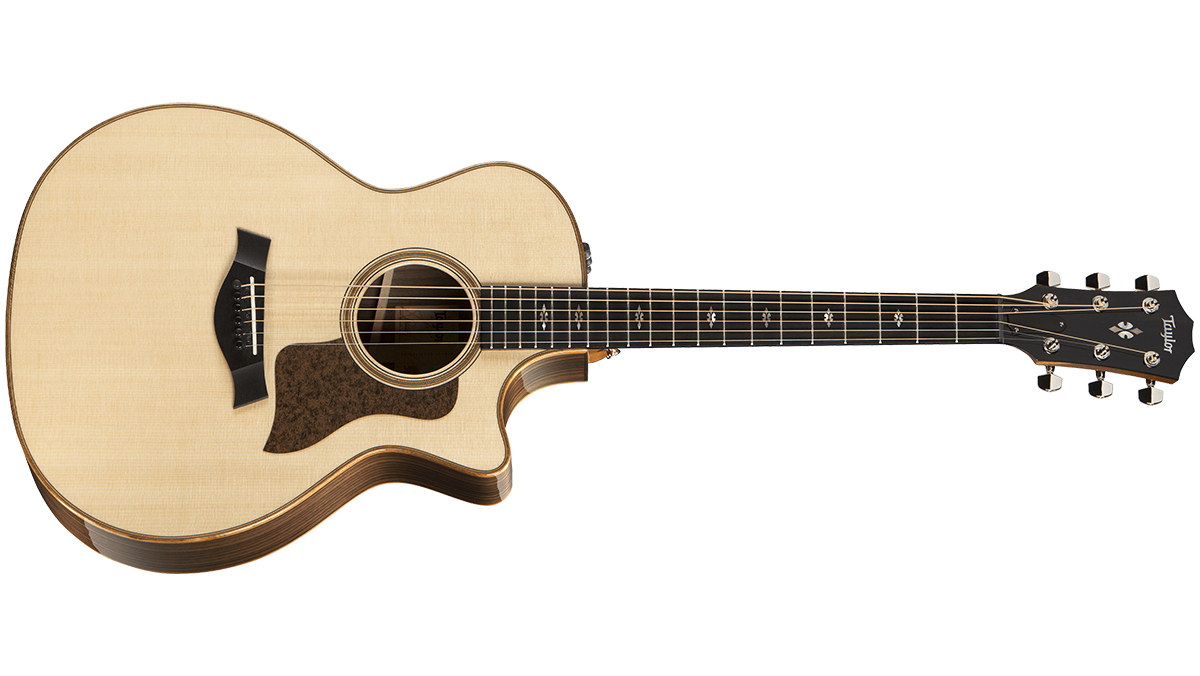 This rosewood Grand Auditorium ​714ce​ boasts a solid Lutz spruce top instead of Sitka, and is available with either a natural top finish or a striking Western Sunburst. Taylor’s Andy Powers likens Lutz’s tonal power to that of old-growth Adirondack spruce, which not only offers extra sonic headroom but additional warmth. Powered by V-Class, the updated 714ce has a singular ability to showcase more of the warmth and complexity of rosewood, producing the horsepower that will appeal to strummers and dynamic players. Street Price: $2,999 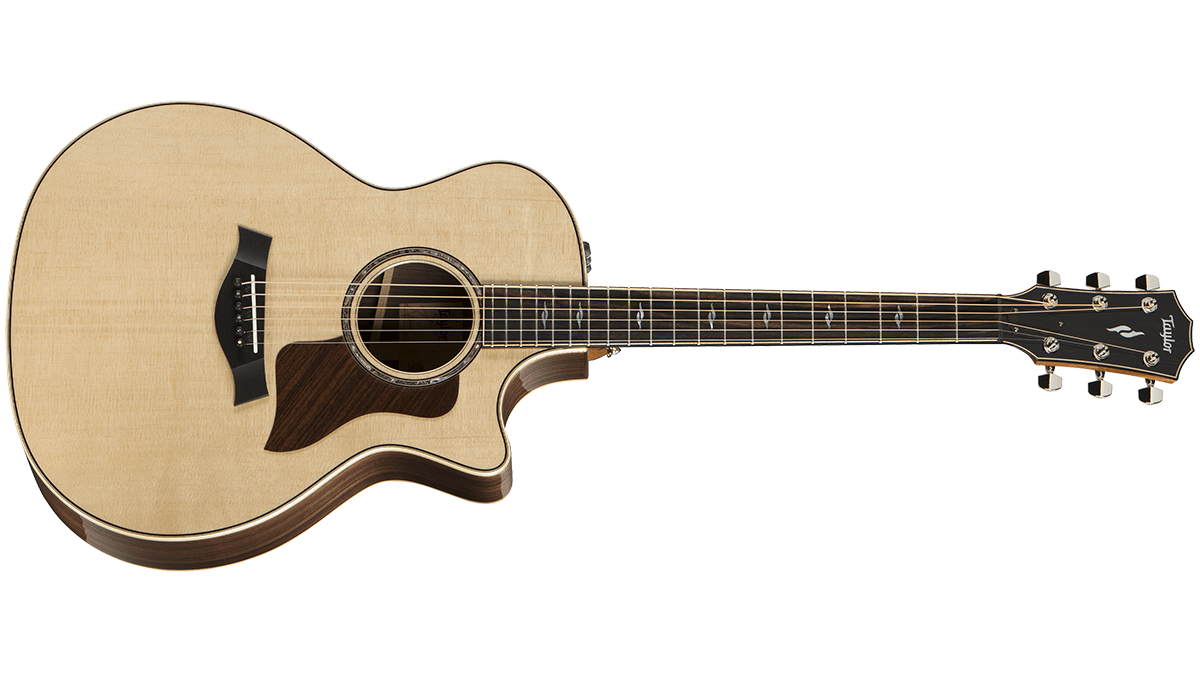 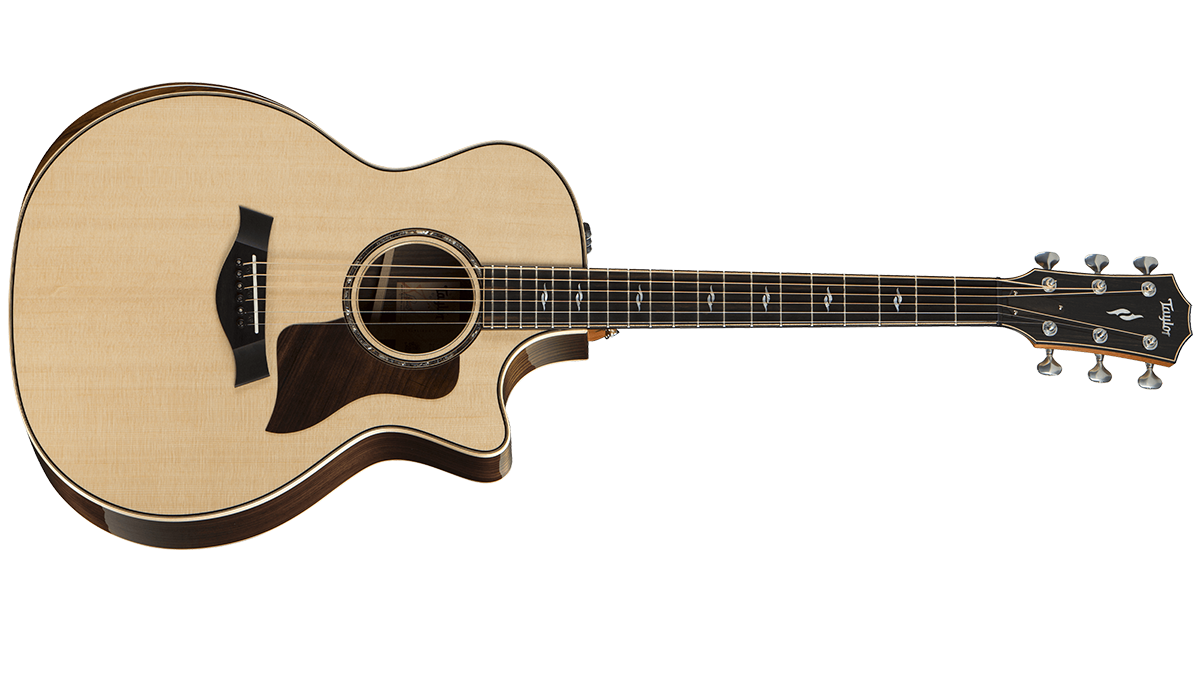 Taylor’s flagship rosewood/spruce ​814ce​ is known for exceptional versatility, tonal balance, and rich overtones — all qualities that are enhanced by the V-Class architecture. Likewise,Taylor has updated its luxurious counterpart, the ​814ce DLX​, which features a radius armrest and Gotoh 510 tuners. With both models, the V-Class design enhances rosewood’s overtone bloom by creating a more orderly response, allowing those overtones to grow without fighting each other. The result is a more flavorful, high-definition rosewood sound that players will love. Street Prices: $3,499, $3,999 (DLX)
For more information please visit ​TaylorGuitars.com.​