Explore the depths of reverb space. 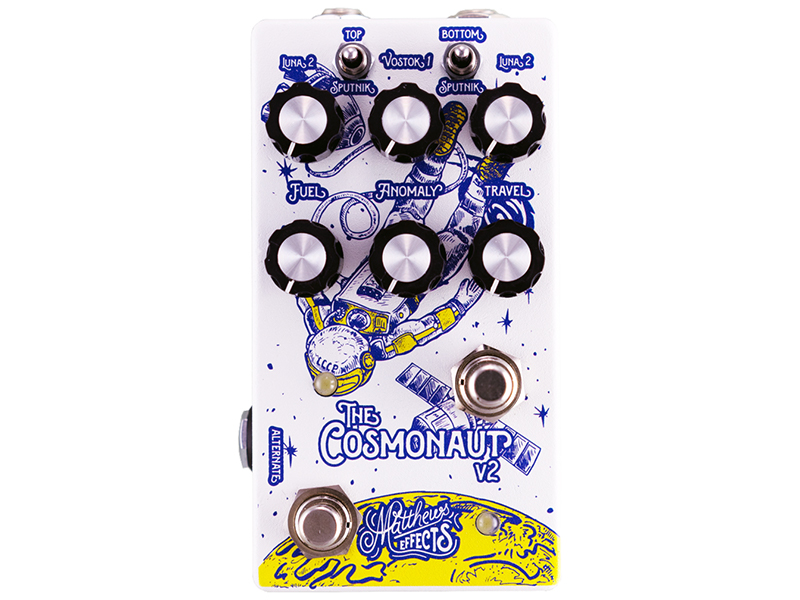 Matthews Effects has launched the Cosmonaut V2, an update to its original reverb pedal. The V2 comes with three ’verb algorithms, a fully-wet mix option, external alternate control and a tails/bypass mode.

Here’s a quick look at its features:

Like the original, the Cosmonaut V2 offers two sets of identical controls that can be toggled via its “Alt Control” footswitch. So dial in two different presets, and you’re ready to ’verb out. The new iteration does, however, offer three algorithms instead of one. To accommodate this, there are two toggle switches—one for the top row of knobs, and another for the bottom—to select between them.

The three reverb presets are: Sputnik, Luna 2 and Vostok 1. The first is from the original circuit, which delivers a classic modulated plate reverb. The Luna 2 is a dark modulated reverb ideal for layering on ambient textures, while the Vostok 1, on the other hand, is a warm tape analog delay.

Elsewhere, other new features on the Cosmonaut include the ability to dial in a 100% wet/dry signal and link up an external footswitch to toggle the Alt Control. It also now has a reduced 100mA power requirement and a tails/bypass mode that includes an option for effects trails after the pedal is disengaged.

Hear the pedal in action here:

Retails at $199.99. More information at matthewseffects.com.