Tom DeLonge has set the guitar internet’s tongues wagging by revealing that for the first time in nearly 20 years, the newly returned Blink-182 guitarist is playing Fender instruments – and not just any instruments, but a quartet of Custom Shop produced Starcasters that are far from being off the peg. READ MORE: Tom DeLonge […] 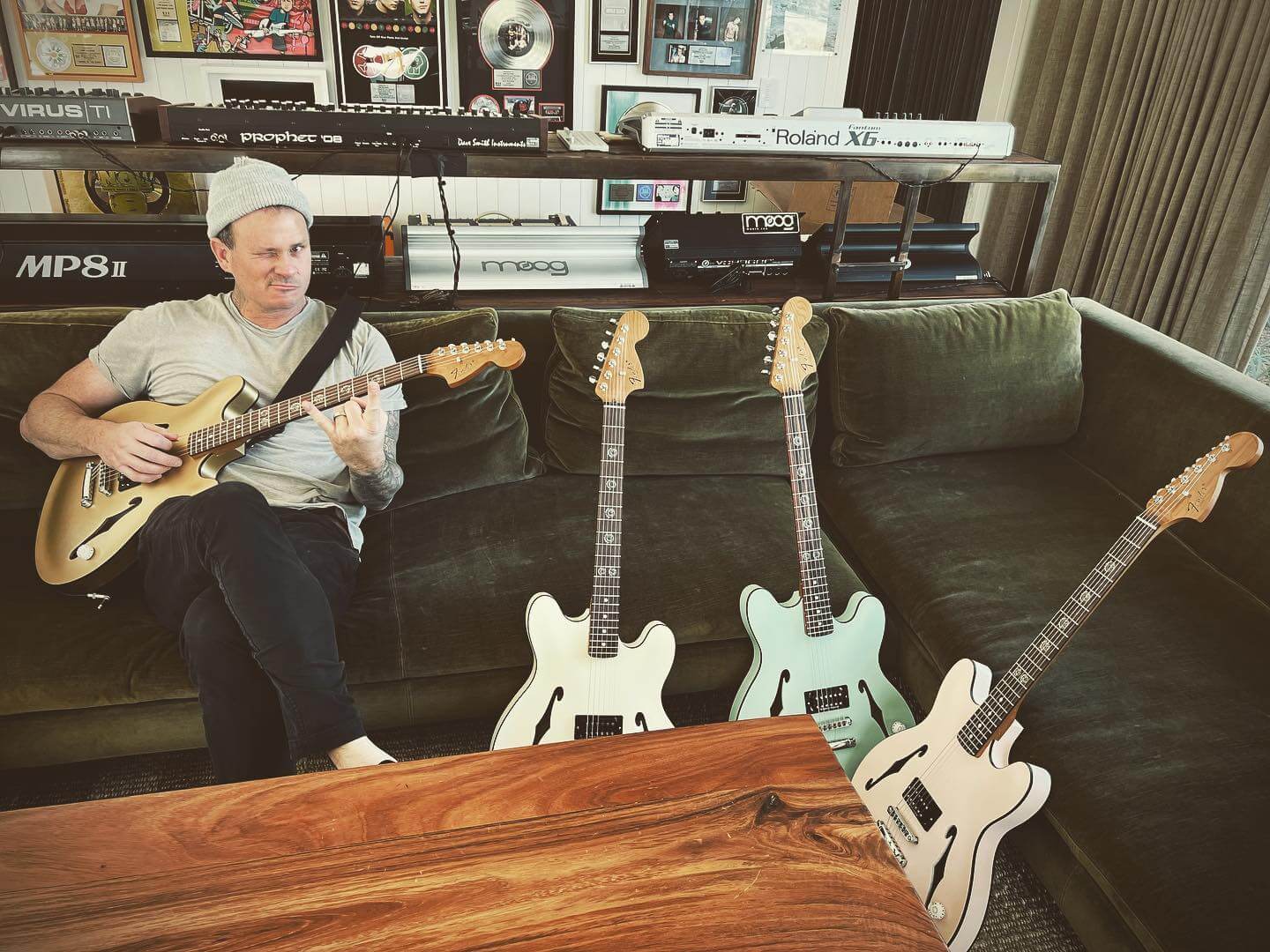 Tom DeLonge has set the guitar internet’s tongues wagging by revealing that for the first time in nearly 20 years, the newly returned Blink-182 guitarist is playing Fender instruments – and not just any instruments, but a quartet of Custom Shop produced Starcasters that are far from being off the peg.

Here’s everything we know about the new guitars, and what it might mean for Blink-182 guitar fans who want to get their hands on one.

So what is Tom DeLonge’s new guitar?

Thrasher has built DeLonge four of these instruments, the first being a white-finished example that he’s covered in stickers from punk legends including Fugazi, Bad Religion, Stiff Little Fingers and the Descendents, and described as “Blink-182 Guitar 2.0”. In addition he’s also got identical instruments that are finished in Shoreline Gold, Shell Pink and Surf Green but as yet are un-modded.

How are Tom DeLonge’s guitars different to a regular Starcaster?

The most striking difference is at the headstock – traditional Starcasters have a distinctive carved, swooping headstock that is unlike any other Fender guitar. DeLonge has opted to ditch this for a big 1970s-style classic Fender headstock, finished in a caramel-tinted lacquer.

Like the Gibson semi-hollow guitars it was created to compete with when it was first launched in 1976, the Starcaster has traditionally had a pair of humbuckers (usually Fender’s Wide Range units) tied to independent volume and tone controls.

However, as has been the preference for DeLonge’s instruments going back over 20 years, all that has been left off of his personal Starcaster, with just a single Seymour Duncan JB humbucker in the bridge tied to a single volume control.

Another unique feature of these guitars are the inlays – instead of the usual dots or blocks you’d see on most guitars, the DeLonge Starcaster’s fret markers are intricate recreations of Blink’s ‘Smiley Faced’ logo, as used on their 2003 self-titled LP. Thrasher revealed that these inlays were done by Fender Custom Shop Principal Master Builder, Ron Thorn, and that the guitar also has glow in the dark side dots.

What guitar did Tom DeLonge used to play?

For most of the last two decades, Tom DeLonge has played one guitar, or at least several versions of the same guitar – his signature Gibson ES-333, which was notable for its drab finishes (matt brown, black and white), prominent racing stripe, unpainted headstock, and the usual combination of single humbucker and volume knob.

DeLonge first used a red Gibson ES-335 (replete with the word ‘Fuck’ written across its bottom bout in tape, natch) when making the Box Car Racer album in 2001, and got the first prototype of the ES-333 in 2003. The model would become Tom’s go-to guitar for most of the next two decades, using it first on Blink’s self-titled album, as well as his primary touring guitar and on all of the Angels & Airwaves albums.

“I’m always using that guitar. It’s so versatile,” Tom told Guitar.com last year. “When I made it, I was very much trying to come up with a guitar that can be used in a live environment, that works for clean tones and dirty tones and everything in the middle. But in the studio we work really fast. I lay down these songs and want to move, move, move. That guitar ends up being a huge component of that.”

Returning to Blink-182 however, seems to have prompted DeLonge to change up his guitars for the first time since 2003, and return to the brand that he was originally known for – Fender.

For what is broadly regarded as the ‘golden era’ of Blink-182’s recording career – 1997’s Dude Ranch, 1999’s Enema Of The State and 2001’s Take Off Your Pants And Jacket – Tom DeLonge almost exclusively played heavily modded Fender Stratocasters.

At first these guitars were modded by DeLonge by stripping out the stock pickups for a single humbucker and volume knob, and then covered in stickers. Around the time of Blink hitting the big time, DeLonge traded up for Custom Shop-made instruments that sported a single Seymour Duncan Invader humbucker, a big 70s-style headstock and often a pearlescent pickguard.

Fender produced a Mexican-made signature model based on these guitars between 2001 and 2003, as well as an affordable Squier version. They were discontinued when DeLonge moved to Gibson in 2003 and are now highly sought after on the used market.

As for why DeLonge switched to Gibsons in the first place, and perhaps an insight into why he’s stuck with the big-bodied semi-hollow look on his return to Fender, he gave us the answer last year.

“When I first started playing, the Stratocaster just seemed like a cool looking guitar,” he told us. “I took out all the pickups, just had one pickup and one knob. I was a punk rock kid. But then later on I realised, ‘Well, fuck, this guitar looks like a violin on me.’ I’m six foot four. I went after the hollowbody. It fits me in scale and vibe. I did the same thing and took out all the knobs and switches and pickups – all this bullshit that does not matter. Just turn it up and go.”

Will Fender be making a Tom DeLonge Signature Starcaster model?

That is the big question – but there’s hope for fans who like the look of Tom’s new guitar and think they might want to add it to their collection.

It seems unlikely that any production version would replicate the intricate inlays seen on the Custom Shop version, but Fender is currently producing affordable Starcaster instruments under the Squier brand in China, and previously made a Fender Modern Player version in 2012.

With the tooling and expertise already available to Fender, it’s not hard to imagine that a scaled back, affordable Tom DeLonge signature Starcaster could become a reality – just watch this space.