You might think that the idea of unearthing an all-original golden-era Fender that’s been kept under a bed or in a closet for decades is pure fantasy. But they are still out there, as Huw Price’s encounter with this 1963 Stratocaster proves… 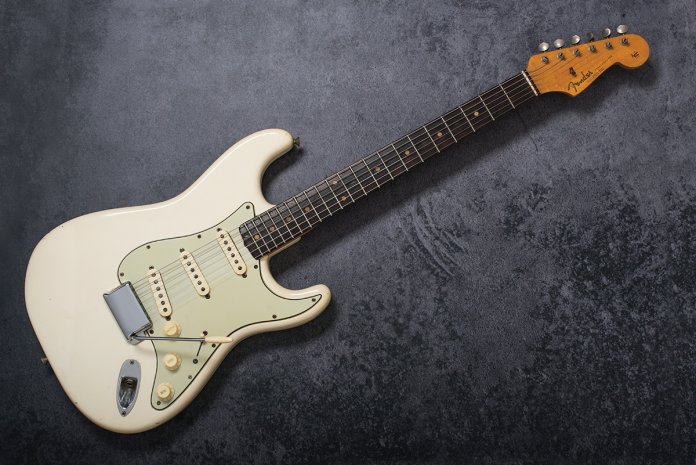 Most of us guitarists have heard tales of unsuspecting people inheriting droolsome vintage instruments by chance, but how often do we get the chance to find out if these hidden gems are actually as good as you’d imagine? You read the story of this particular guitar on p45, but the short version is that since rolling out of the Fender factory in Fullerton in 1963, this Olympic White Strat has had just two owners – it took early retirement in 1968 and has remained with the same family ever since. 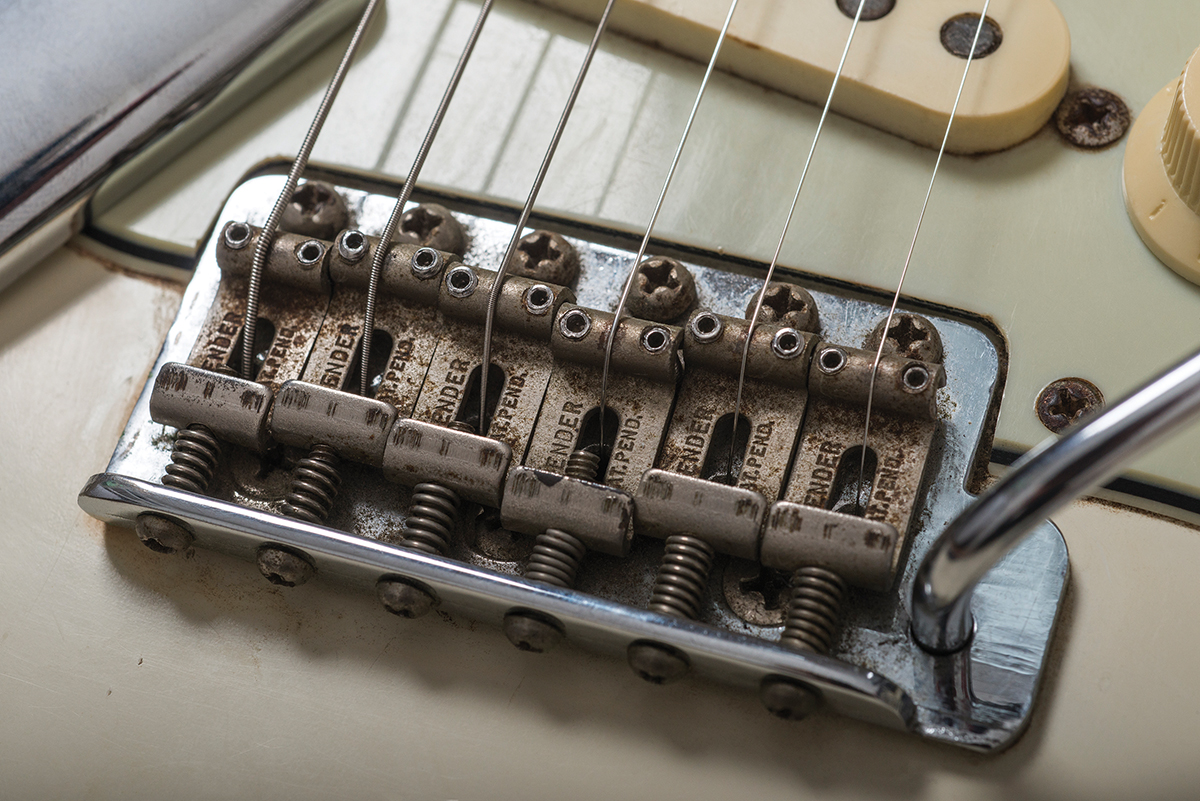 This guitar was probably played with the bridge cover installed, as there’s little corrosion on the saddles, and the distinctive casting marks stand out

As befits a 1963 Stratocaster, the neck has a ‘veneer’ fingerboard of intensely dark Brazilian rosewood. We notice a hardened drop of something that has run down the side of the neck on the treble side of the neck pocket area and on close examination we think that the fingerboard has been varnished at some point. 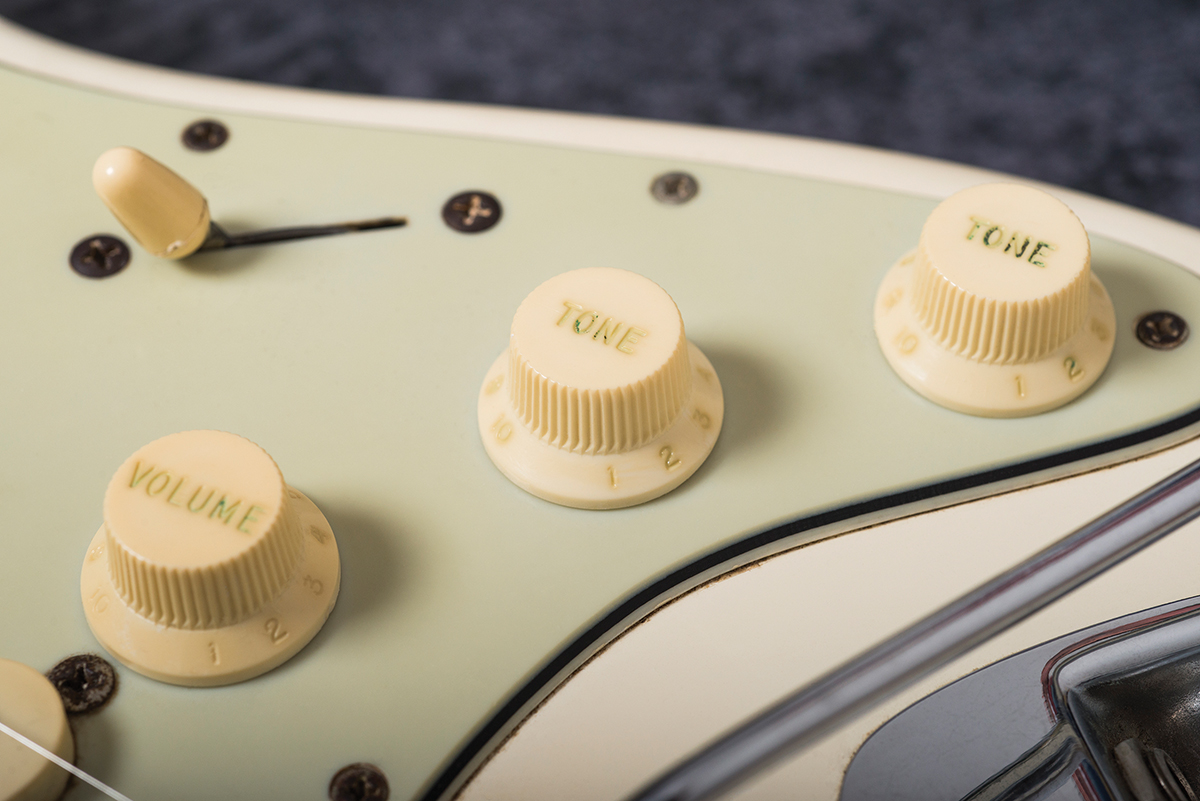 There are some minor divots in the usual playing areas, which is quite commonly seen on vintage guitars. We rarely see this on even heavily played 10- or 20-year-old guitars, so we have to wonder if long fingernails were fashionable back in the 60s, or whether nail clippers were harder to come by. Either way, varnishing the ’board was probably done in an attempt to protect the wood, and we have seen it sufficient times to suggest that it was a common ‘fix’ during the era. 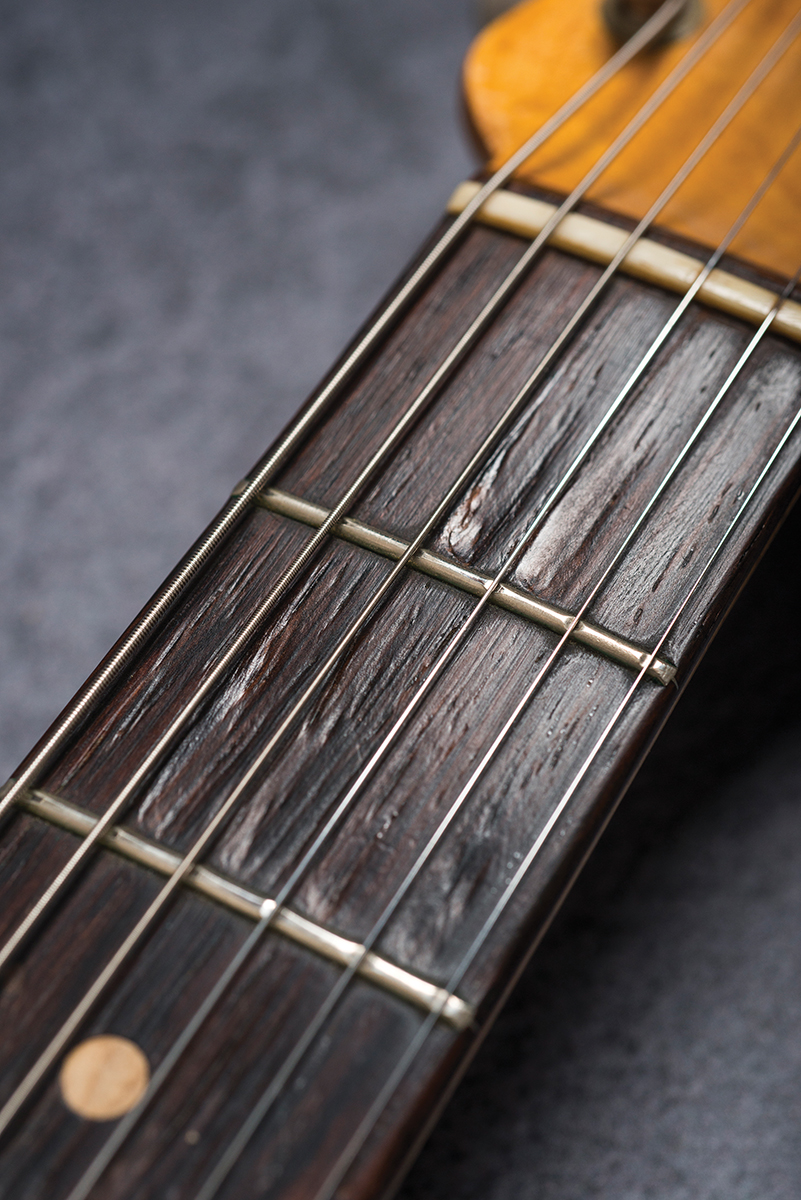 The rosewood wear is deepest and most noticeable near the nut, which suggests a lot of open-chord playing

The almost pristine decal has three patent numbers, the single-line Kluson tuners are all in fine working condition and the neck lacquer has aged to a deep honey amber colour. With the factory frets still in place, it’s interesting to note that the tang slots were sawn to almost the full depth of the rosewood. It’s no wonder that after a couple of refrets, so many veneer-’board Strats of this era ended up with slots cut deeper into the maple, with the fingerboard itself being sanded in the process. 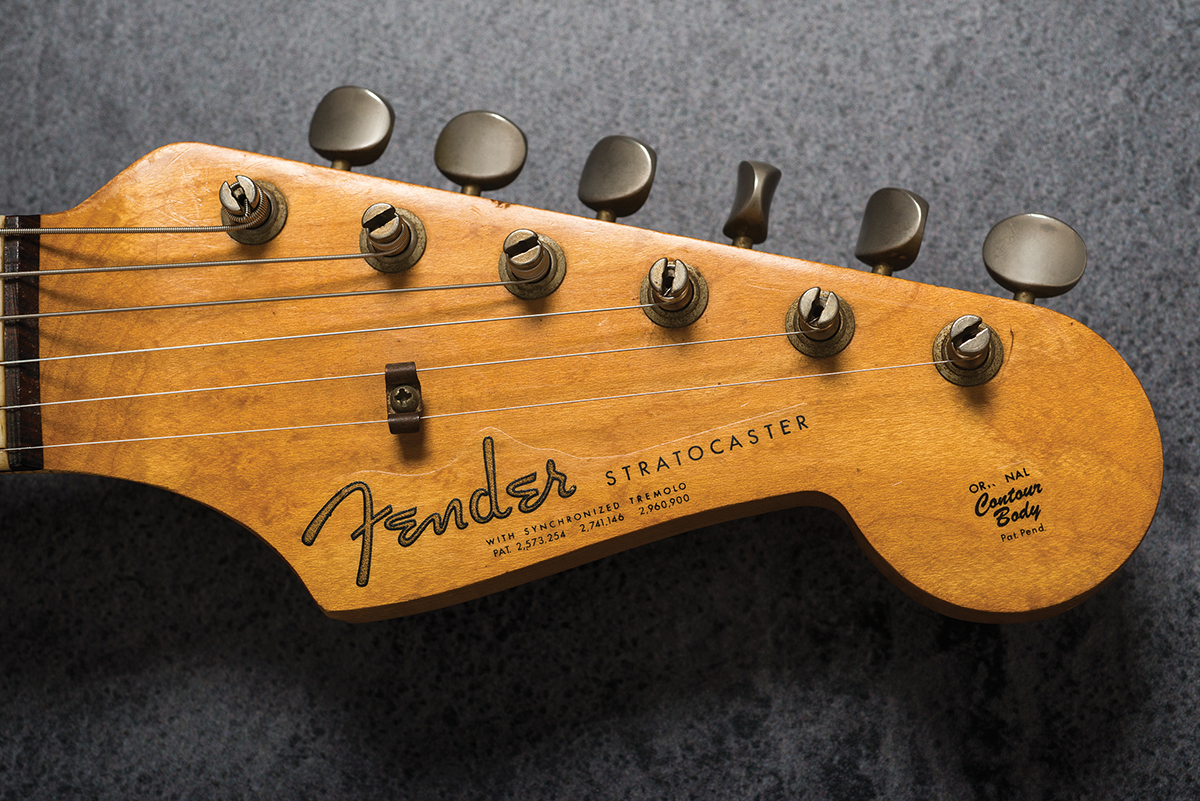 The headstock is near-pristine, with only the tiniest bit of damage on the smaller decal and a touch of corrosion on the string tree

Strat necks got really skinny during the early 1960s, but by 1963 they were beginning to put on a little weight, and we think they are all the better for it. This one’s a wonderful example with subtle flames, starting out fairly slim then gradually filling out before acquiring real heft from the seventh fret onwards. Although there is some play wear, the lacquer remains intact on the back of the neck. It’s thinned somewhat and slightly paler in colour, with only one faintly grey area where the wood shows signs of oxidisation.

The alder body is in similarly fine condition, with a few dents and chips acquired during its short but intense gigging life. It looks like a cherished but un-pampered five-year-old guitar – which is essentially what it is. Fender’s Olympic White was actually an acrylic and here it appears to be sprayed over a Desert Sand basecoat. 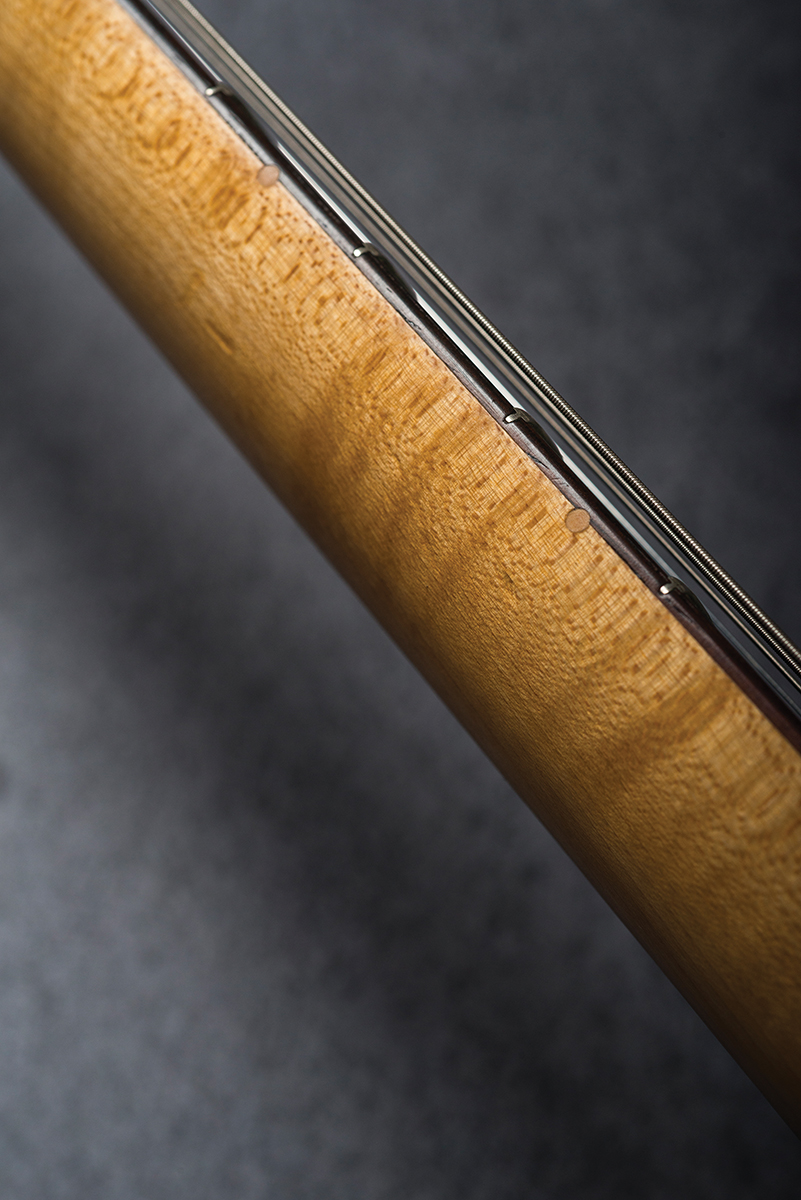 Fender usually sprayed nitro clear coats over the top and as the nitro aged, Olympic White Fenders turned creamy yellow. Those that retain their whiteness are the instruments that weren’t oversprayed with nitro, and although this example hasn’t yellowed to a significant degree, it’s far whiter under the pickguard. We think it’s clear nitro over acrylic, and that keeping it hidden away from sunlight for over five decades has surely helped preserve the original colour, and there’s no checking. 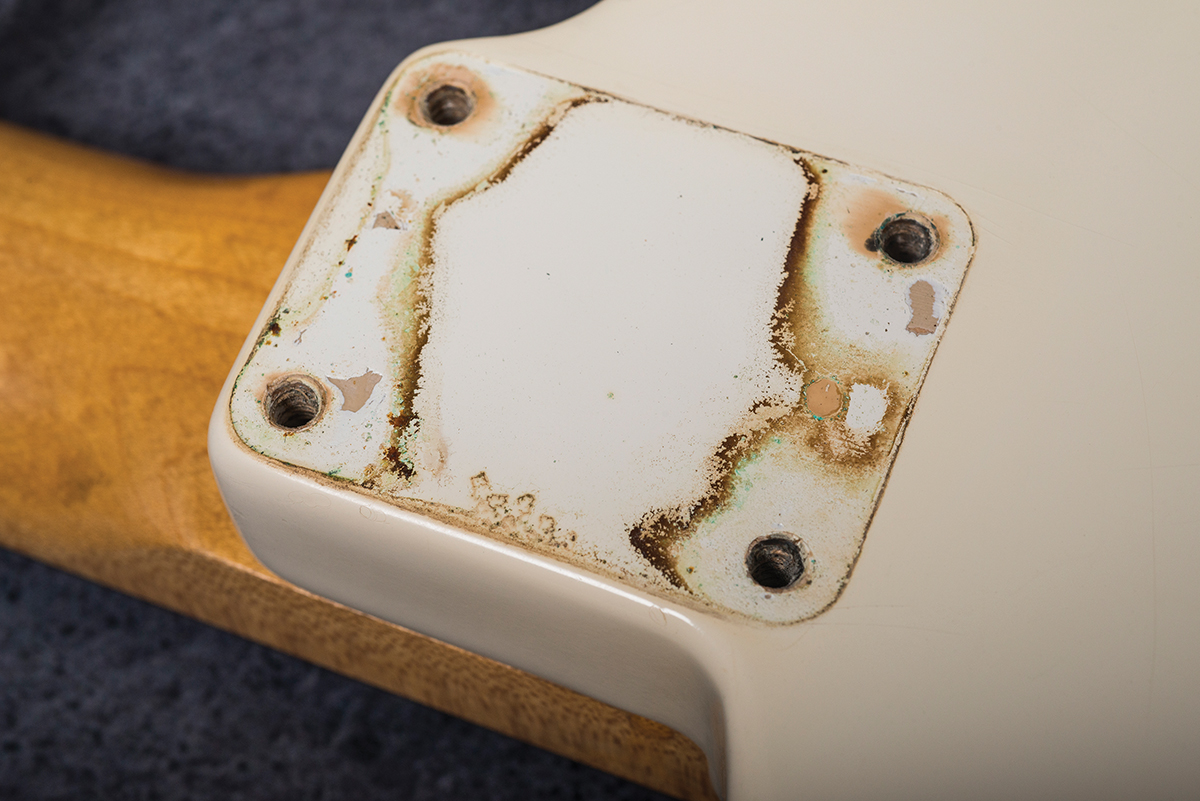 Protected from UV light by the neck plate, the original shade of Olympic White has survived intact

Although it spent many years without any regular care and maintenance, the Strat arrives with bridge parts that are almost as clean as they were when they left the factory. The original bridge cover is still with the guitar, and it probably remained fitted to the bridge when the guitar was used. Up close, we can see some minor pitting on the chrome-plated cover where a player’s hand once rested. 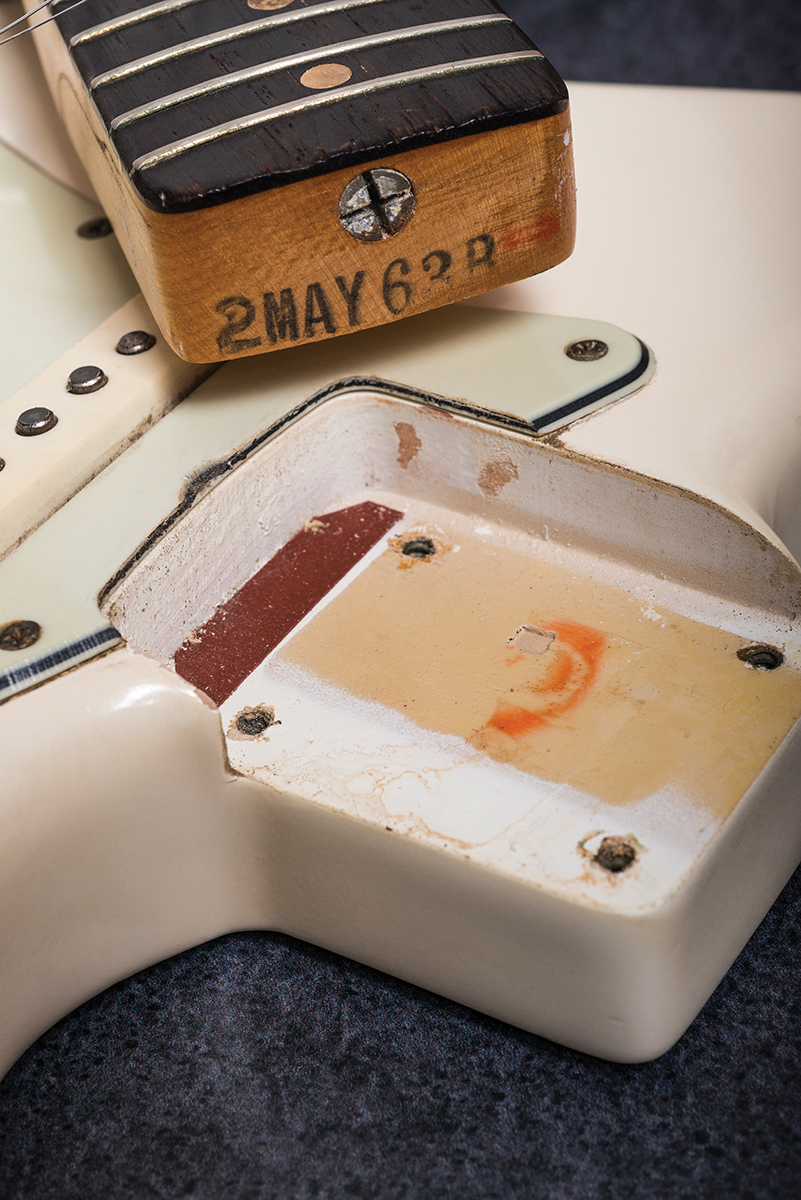 We remove the neck to adjust relief before testing – probably for the first time judging by the pristine screws. A factory fitted shim is revealed, along with a neck date stamp reading May ’63. The green celluloid pickguard is indisputably one of the best–preserved examples we have seen, with no cracks and barely any shrinkage. While the neck is off, we take the opportunity to peek underneath.

This is what mint Fender factory wiring looks like, complete with the original three-way switch, potentiometers and ceramic 0.1uF tone capacitor

Inside, we find a still shiny aluminium shield plate and pristine wiring. All the solder joints are original, the spring claw ground wire goes straight through to the output jack and the pickup wires are still bundled together with the original masking tape.

As expected we see a 0.1uF ceramic tone cap with a bright yellow insulation wire and the three-way switch is still intact. Having stiffened up to the point where it’s hard to operate, a few drops of three-in-one oil soon free it up and the Strat’s ready for testing. 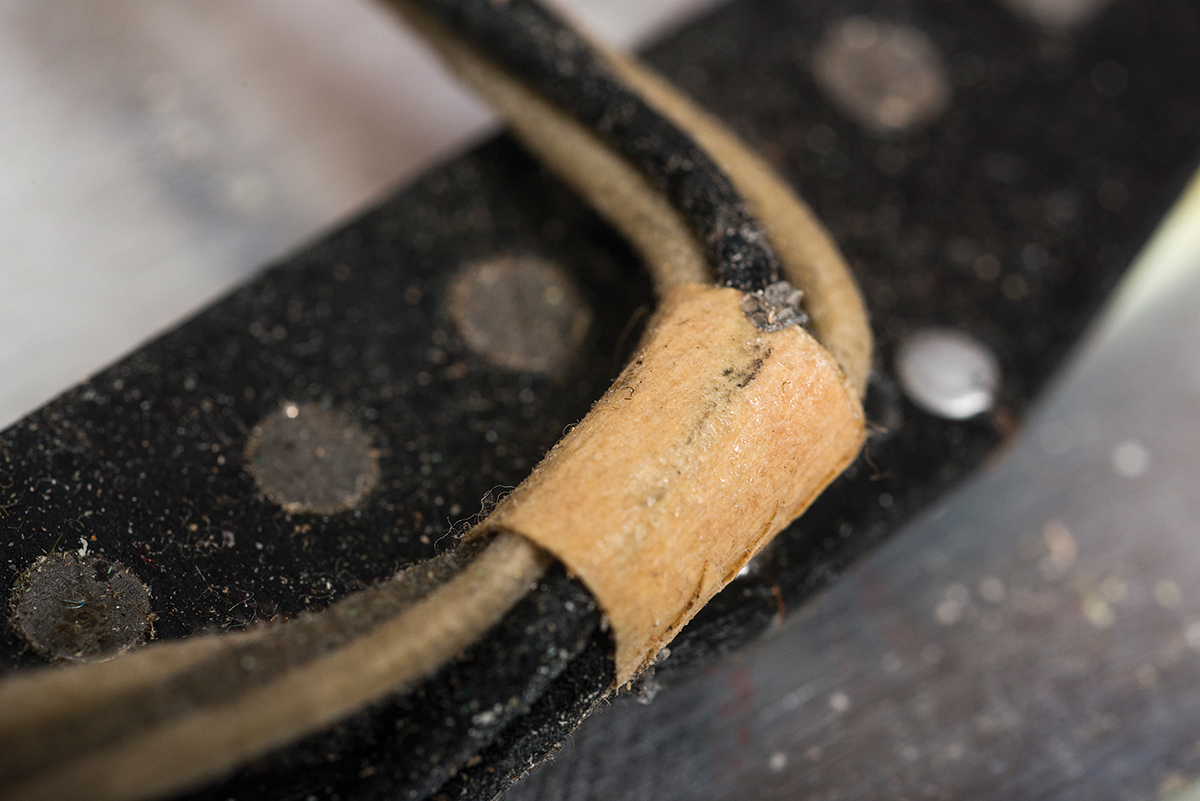 This Strat undermines two fondly held vintage guitar myths – namely that the clean ones weren’t much good to begin with, and that even the best ones stop sounding good when they’re left unplayed. With strong vibrations apparent all through the body, it’s apparent this is a ‘live one’ and even after half a century of inactivity, it plays very well. The 7.25-inch ’board radius doesn’t preclude a low action and it feels fantastic for chord work, but a touch more fret height would help facilitate string bending and finger vibrato. 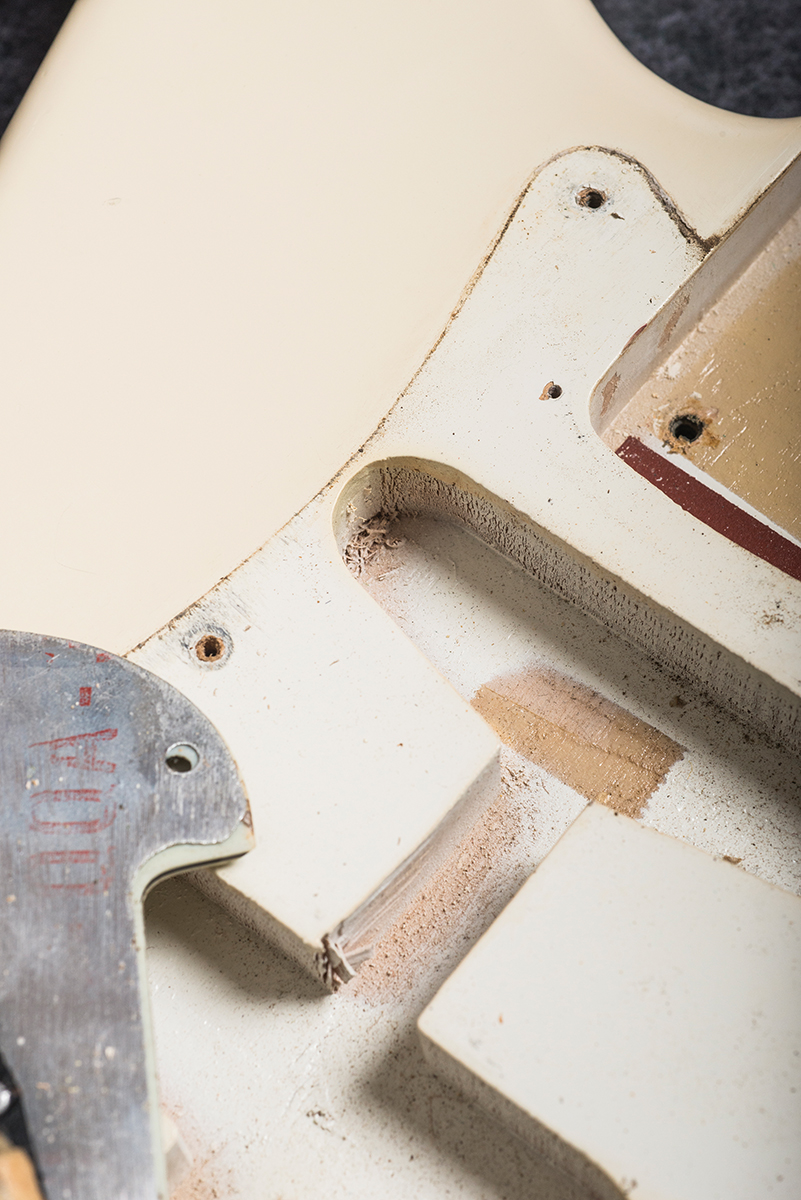 The unplugged tone is full and vibrant with impressive sustain, deep lows and an airy gloss in the treble. Through an amp it’s one of the clearest sounding vintage Strats we have ever played, but the treble always remains complex and sweet rather than shrill. 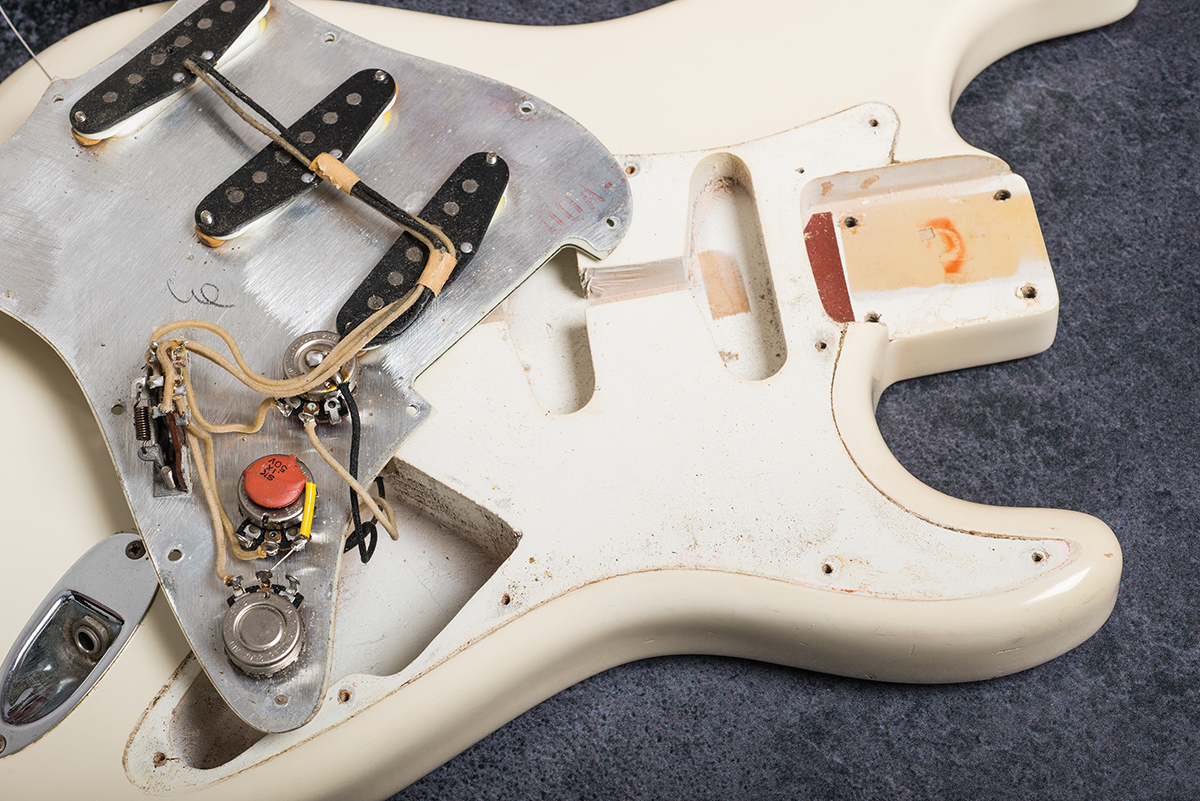 The aluminium shield plate remains fresh and shiny, with three original black-bottomed pickups that all still have their rubber tube spacers

The bridge pickup is a revelation, because it’s Strat tone at its most springy and vibrant – pure heaven through a Vox. The harmonics are so abundant, it’s as if there’s a built-in chorus. Over on the middle pickup, the trebles soften and the midrange asserts itself with a hint of quacky resonance. Often neglected even by dedicated Strat players, a middle pickup of this calibre reminds us that they are in many ways the pick of the bunch. 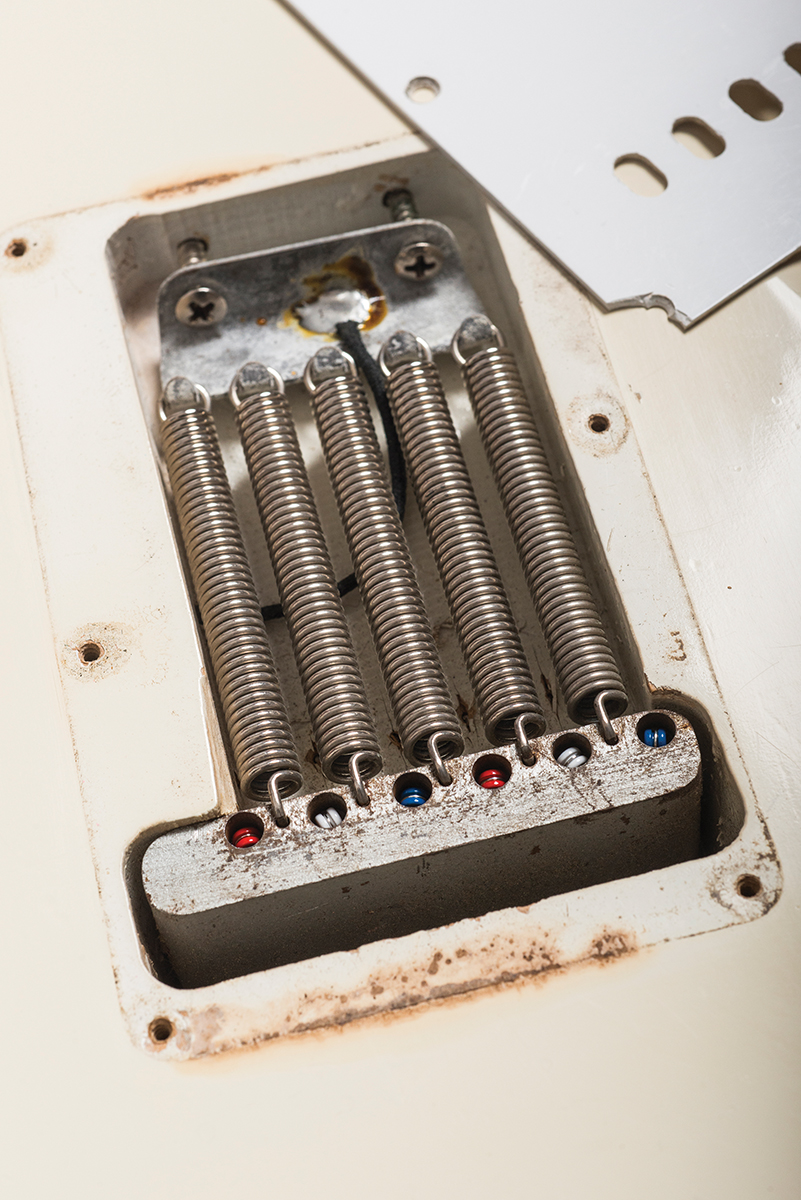 The spring cover is missing one corner, but all five springs are still fitted to the steel block

The neck setting produces the most vocal single notes and the woodiest lows. It’s so sweet, expressive and downright pretty it’s hard to credit it as the same Strat that dishes up the bridge tones described earlier. Each position – the in-betweeners included – is unusually distinct and you really couldn’t ask for more from a vintage Stratocaster. 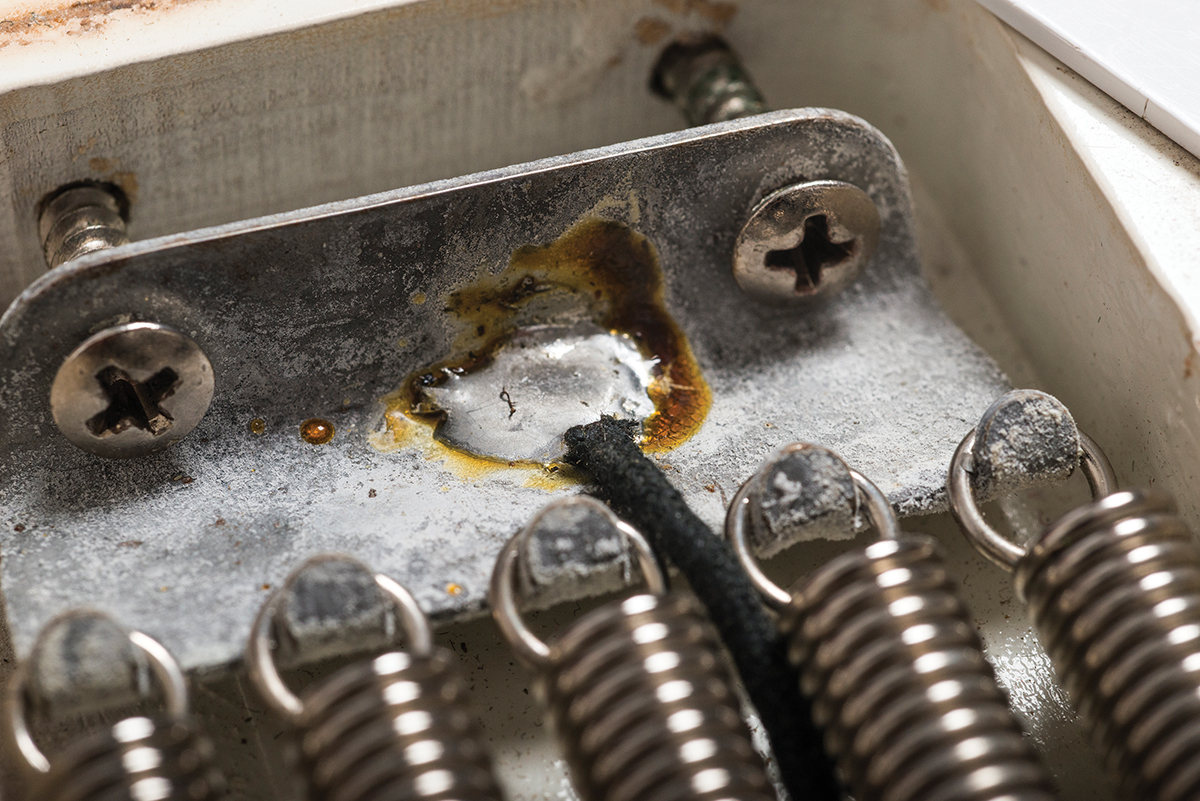 We have played brighter, fatter, louder and more wiry examples, but this Strat gives you something of everything. We all know what Strats sound like, but few are as complex, refined and nuanced as this. With some wear and flat spots, it is on the cusp of needing a refret and we think doing so would enhance it without negatively impacting its value. In all other regards, you’d struggle to find a better custom colour pre-CBS Strat with such solid provenance. 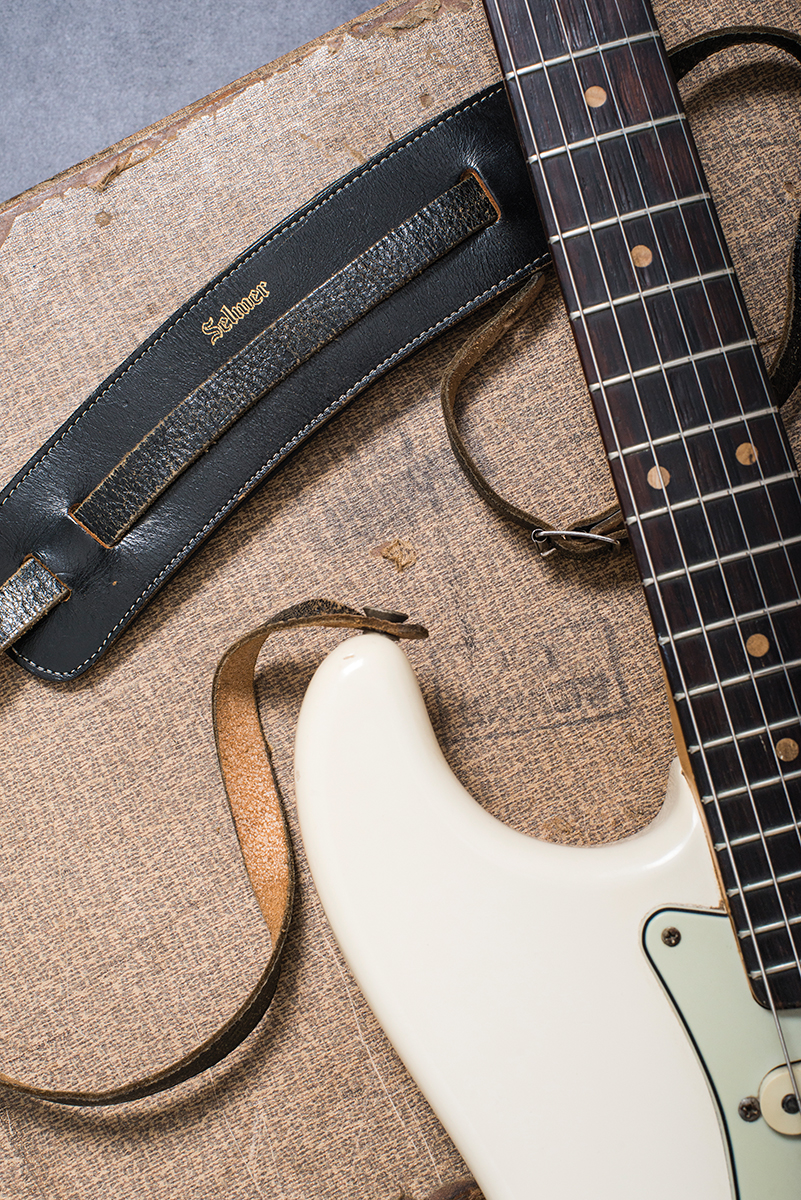 An intact solder joint on the spring claw is a positive sign that the finish may be original, but always check the jack socket, too 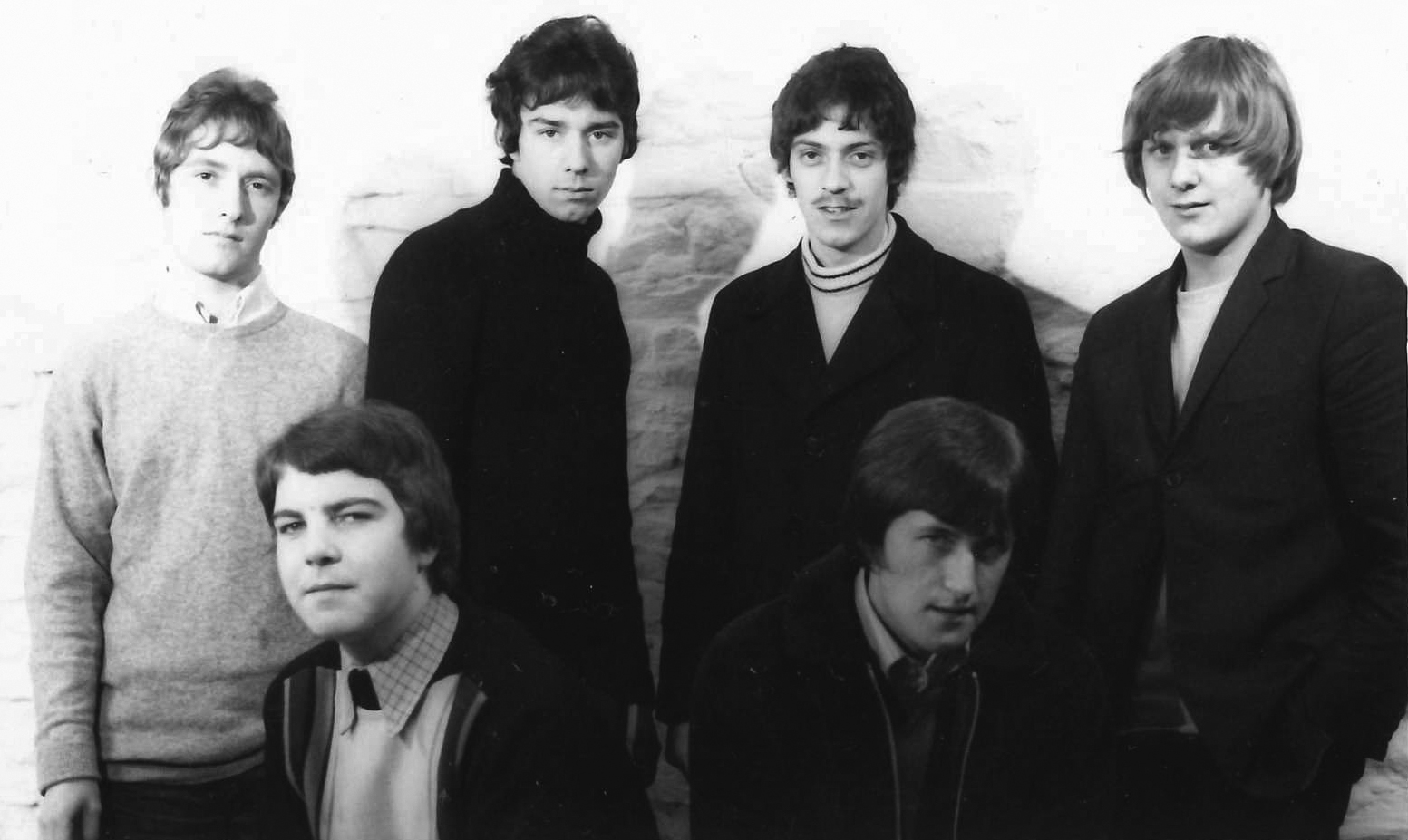 David Pontin began playing guitar in a band in 1965 when he was 17 years old. Formed in the Gwent valleys by a bunch of friends, they were known as The Shape Of Things and by 1966 they were gigging regularly with David playing mostly rhythm.

At the time David was playing a three-pickup Harmony double cutaway – possibly a H75 – through his Selmer Zodiac Twin combo. Former bandmate Gwyn Roberts remembers it sounded fabulous when he used his fuzzbox. The band changed direction and became The Midnight City Soul Band. There was a personnel shuffle, too, with the lead guitarist moving to saxophone and David combining lead and rhythm guitar duties. The second sax player in the band was at Cardiff University and he knew a cash-strapped fellow student who had a Fender Stratocaster he wanted to sell.

According to Gwyn, David was “over the moon” when he bought the guitar for £50 in late summer 1967. By this time the band was gigging regularly, notching up 200 gigs in 1967 alone. Perhaps the high point for David was supporting Status Quo at Abergavenny Town Hall Ballroom on 16 March 1968, shortly after Pictures Of Matchstick Men had hit the charts.

David met a girl at one of his gigs and when they married in June 1968, he decided to quit the band. Rather than sell his guitar, David stashed it away in its Selmer case and it was variously kept it under the bed or in a cupboard. Even before he fell ill with the brain tumour that would confine him to a wheelchair in 1987, David would only occasionally get his guitar out for a quick play. Gwyn recalls that David was “a very good player with a nice touch that was ideal for soul music”. Sadly, David passed away in 2014 and we are very grateful to the Pontin family for letting us feature his guitar.

Special thanks to Steve Pontin and Gwyn Roberts for helping us learn about this wonderful guitar’s story.