In 1953, Les Paul asked for a guitar that “looked like a tuxedo”, but by the late 60s the Custom had built its own legend. Huw Price checks out a strummer from ’69… 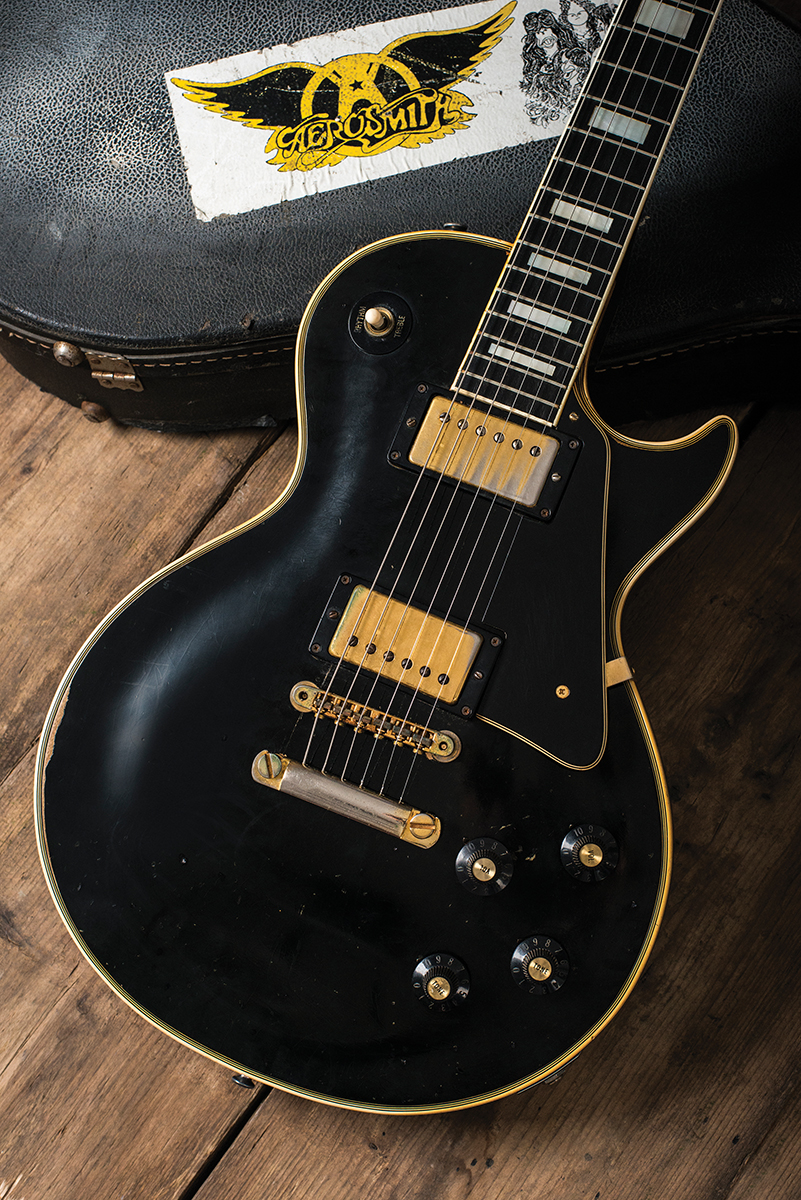 The luxurious Les Paul Custom evolved throughout the second half of the 1950s and continued to do so following its reintroduction in 1968. Until 1963, all single- and double-cutaway Custom bodies were made purely made mahogany. When the Les Paul Standard acquired two PAF humbuckers in 1957, the Custom got three. Its fingerboard was always ebony to match the black lacquer finish.

For its ’68 comeback, the Custom reverted to two humbuckers – by now Patent Number units were de rigeur in Kalamazoo – and the headstock angle was altered from 17 to 14 degrees. The body also finally acquired a maple cap and Gibson attempted to streamline the production process. 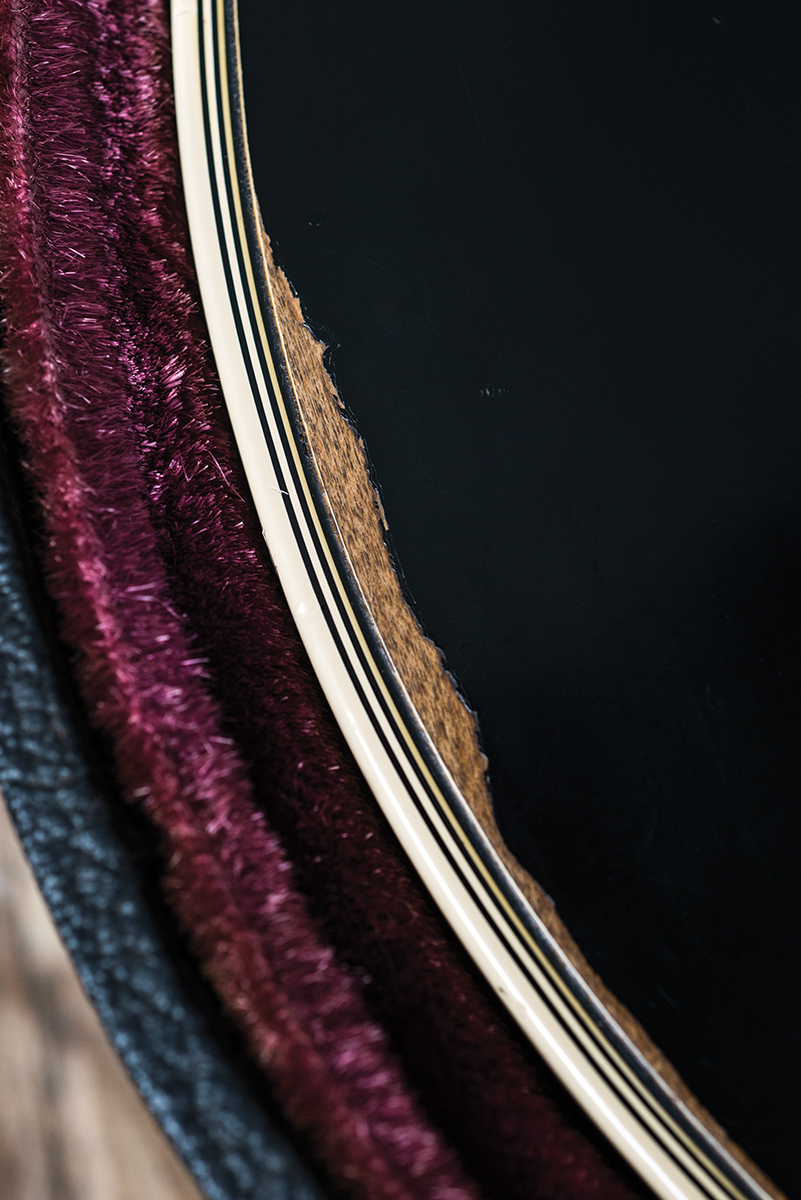 During the 1950s, Gibson routed the wiring channels into the mahogany back then glued a mahogany cap on top before routing the control cavity. The top arch was a complicating factor – the base of the control rout had to be angled so that the cap depth was sufficiently thin enough for the control pot shafts to pass through the holes. 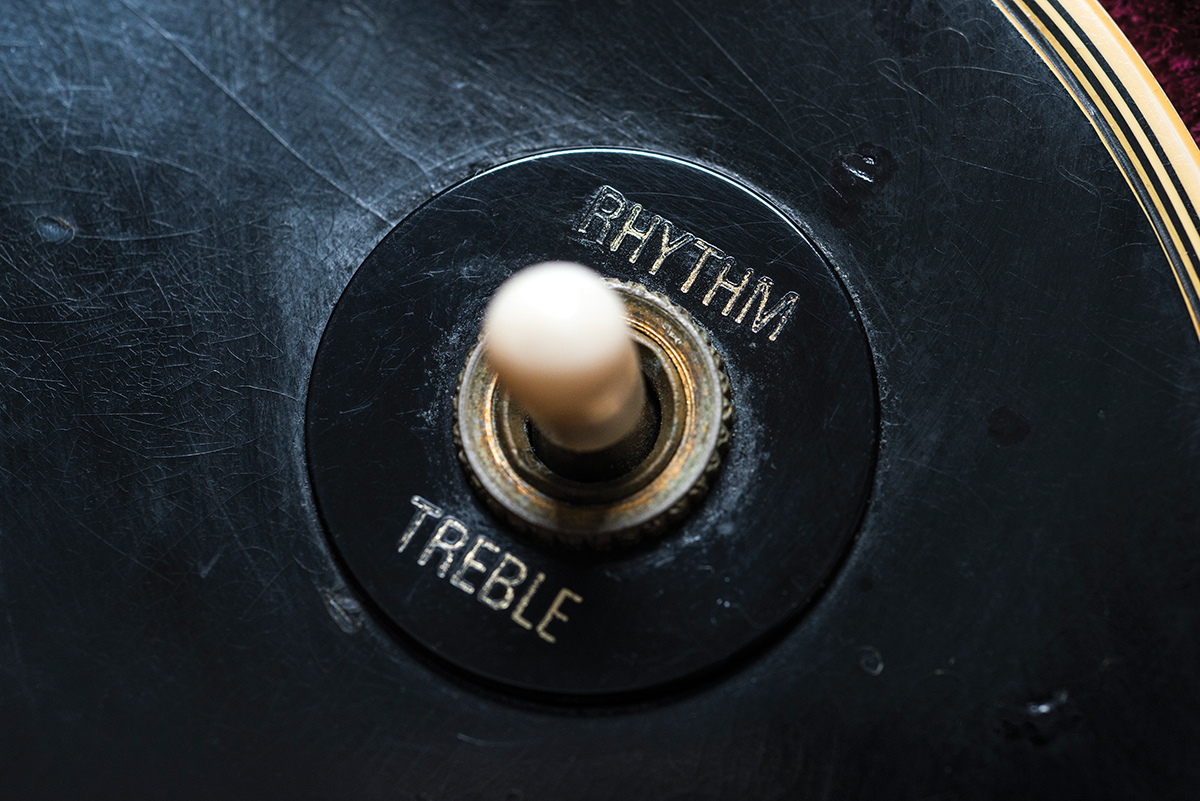 Shortly afterwards, Gibson introduced the ‘pancake’ body with a two-layer mahogany back sandwiching a thin layer of maple. By mid ’69, headstocks acquired ‘made in USA’ markings and a volute.

Assuming all this information is accurate, it helps to pin the manufacturing date of this Les Paul Custom down to a fairly specific timeframe. This guitar has the step rout cut into the maple so it was made after January 1969, but there is no evidence of a ‘pancake’ layer. Furthermore, there is no volute or ‘made in USA’ stamp. On that basis, this was probably on Gibson’s production line sometime between February and May 1969.

The guitar’s black lacquer has shrunk sufficiently to reveal a join line in the maple top that’s about 15mm to the side of the bass tailpiece post, but it’s probably the only part of this guitar that hasn’t changed colour since 1969. Much of the gold plating has rubbed off the hardware or picked up verdigris around the edges, the clear coats over the binding have yellowed considerably and by the same process, the pearl inlays on the peghead have acquired a golden hue. 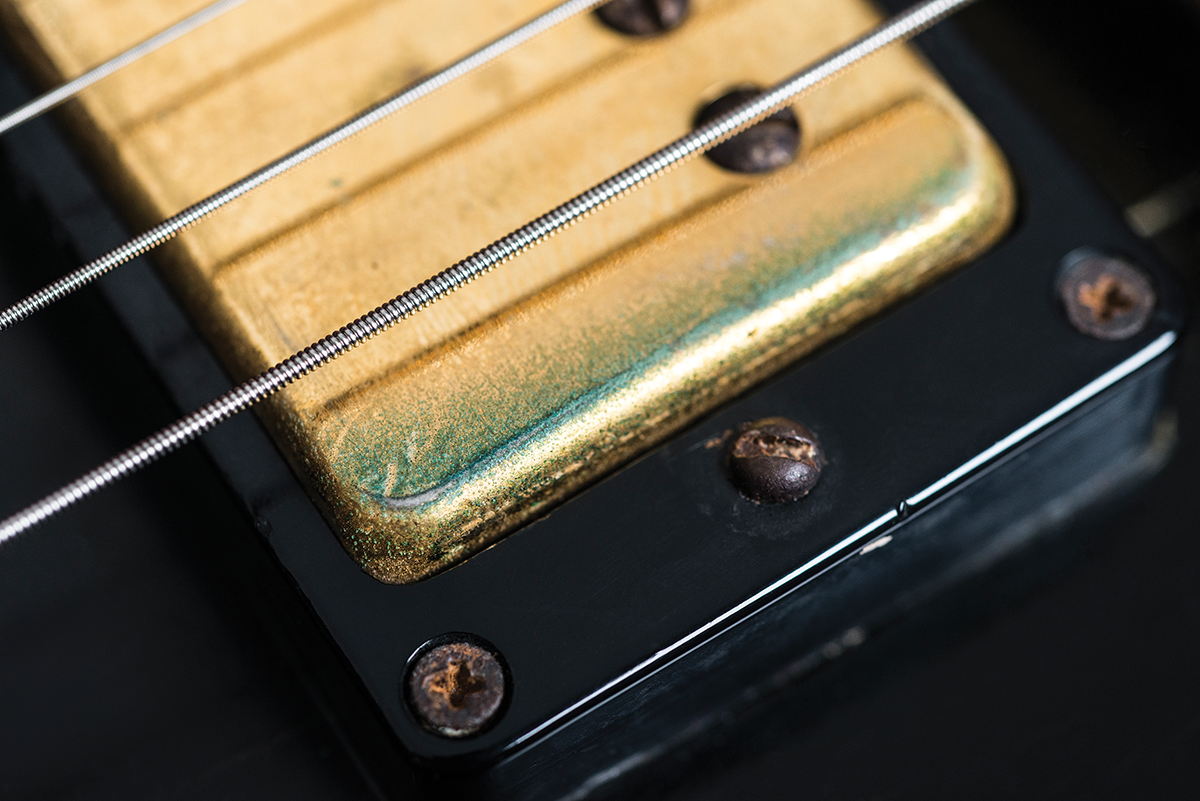 Much of the gold plating has rubbed off the hardware or picked up verdigris around the edges – the pickup covers have fared a little better, likely because they were removed at some point

Look closely and you’ll see how the Gibson logo evolved from the ‘kissing dot’ style of 1952 to the missing dot of 1969 as it migrated northwards away from the tuners. Speaking of which, its machineheads are patinated waffle-back Klusons and paired with its bound headstock, it’s a truly classic Gibson look.

The 1950s Les Paul Customs were known as ‘fretless wonders’ because they were fitted with low frets to attract non-string bending jazz guitarists who wanted easy chording and a fast action. Although the Les Paul was reintroduced at the behest of rockers, Gibson possibly believed the reissue Custom might have jazz appeal. This Custom still has its narrow and low factory frets, so any prospective owner will need to make a decision with regard to playbility. 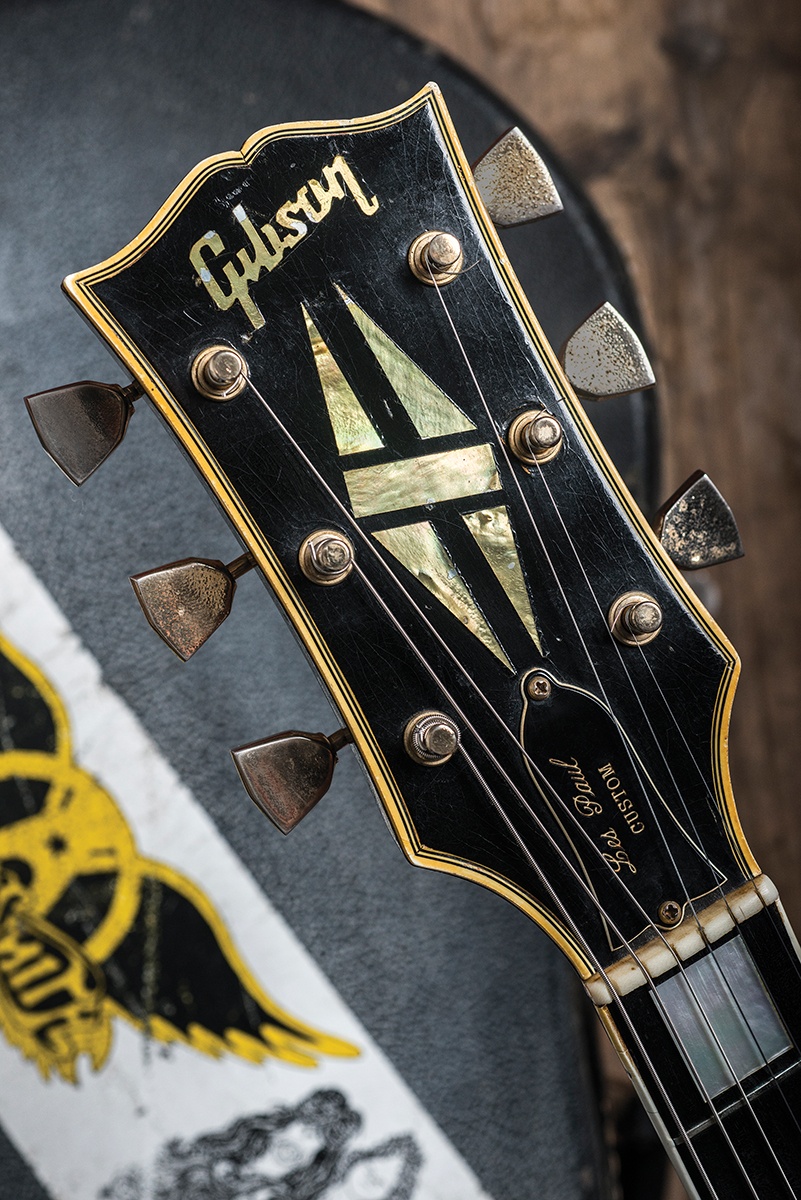 Although currently fitted with a replacement tailpiece, the original will be sold with the guitar. In all other respects the Custom appears entirely original, from its five-ply pickguard to its witch hat knobs, control pots and Sprague Black Beauty tone capacitors. The Patent Number pickups are correct, too, although the covers have been removed at some point – this possibly explains why the gold plating on them has largely survived so well. The control cavity solder joints appear untouched.

This old road warrior has patina in spades, yet it feels clean, solid and pleasing to play. A fair amount of finish has worn off the back of the neck, but it’s smooth to the touch and it’s interesting to observe how Gibson blew the black coats over clear lacquer. You could no doubt lift out some of the stains and ingrained dirt from the finish, but in doing so much of the Custom’s appeal and value could be lost. 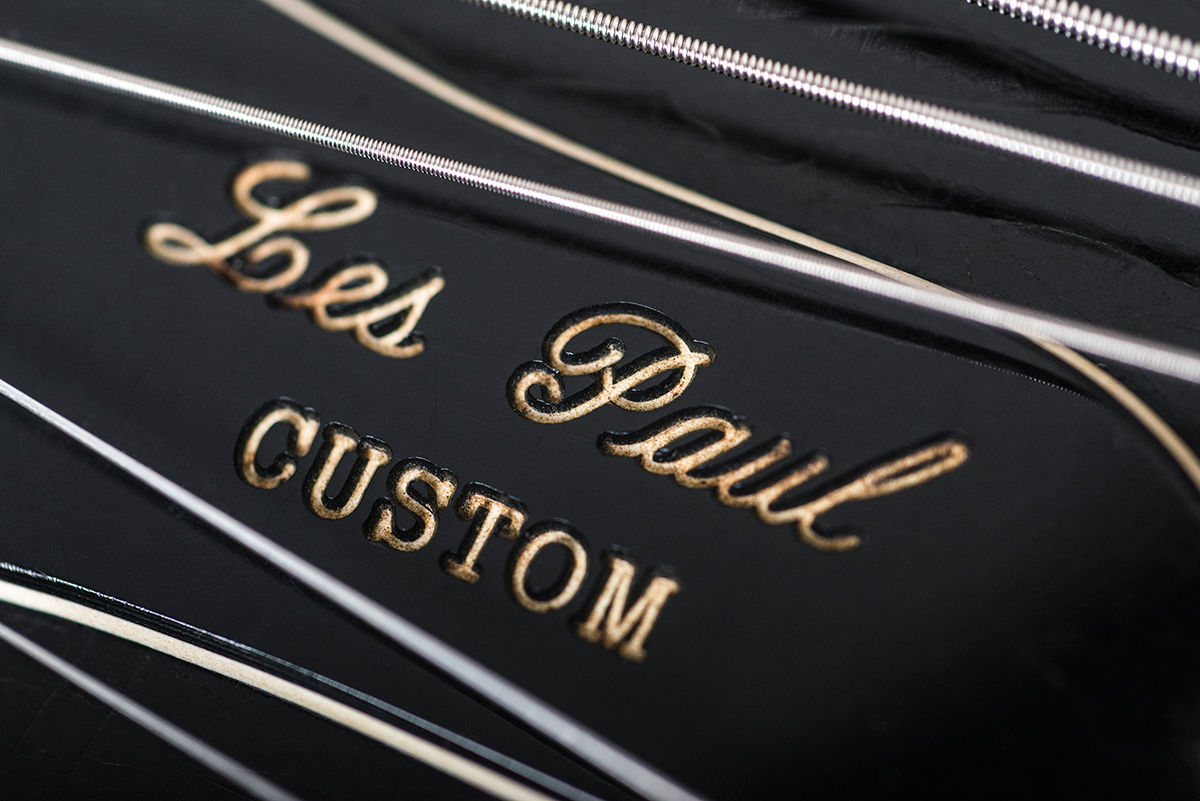 The outline may be much the same, but by 1969 the feel and tone of a Les Paul was very different to that of the legendary Bursts of the late 1950s. There’s something hefty, solid and even brutal about this Custom that has an appeal all of its own. Weighing in at over 10lbs and with a neck that’s on the chunky side of fat, it’s a guitar that requires physical commitment from the player – that is, unless you’re a jazzer who gets to perform sitting down, of course! 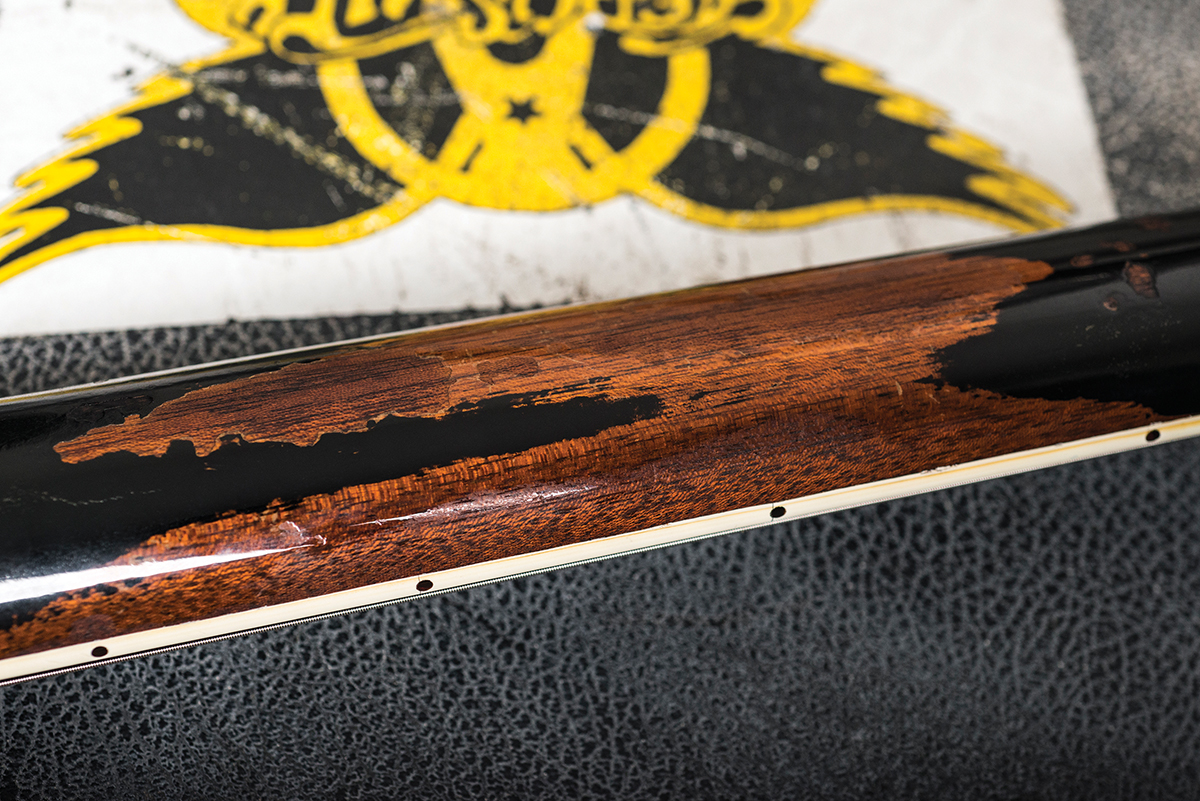 Acoustically it’s fairly resonant, the transients are quite soft and the overall tone has a smooth, fat and compressed quality. There are issues with the G and B string saddles because both strings sound rather muted irrespective of whether they’re fretted or played open – happily, this is an easy fix and we note that the bridge has the intonation adjustment screws facing the stop tailpiece. It may seem like the logical way to do it, but when the tailpiece is set close to the body, the sharp break angle can cause the strings to foul against the screw heads, as is the case here.

While we’ve often marvelled at the unplugged tones of vintage Gibsons, the Custom only comes to life when it’s plugged in – but it soon makes up lost ground. This Custom generates a big, powerful and strong sound. The niceties of upper harmonic bloom and touch-sensitive dynamics aren’t what this Les Paul is about – instead, the bridge pickup provides solid powerchords with deep and growling lows and a useful resonant cut in the upper mids that enhances definition. 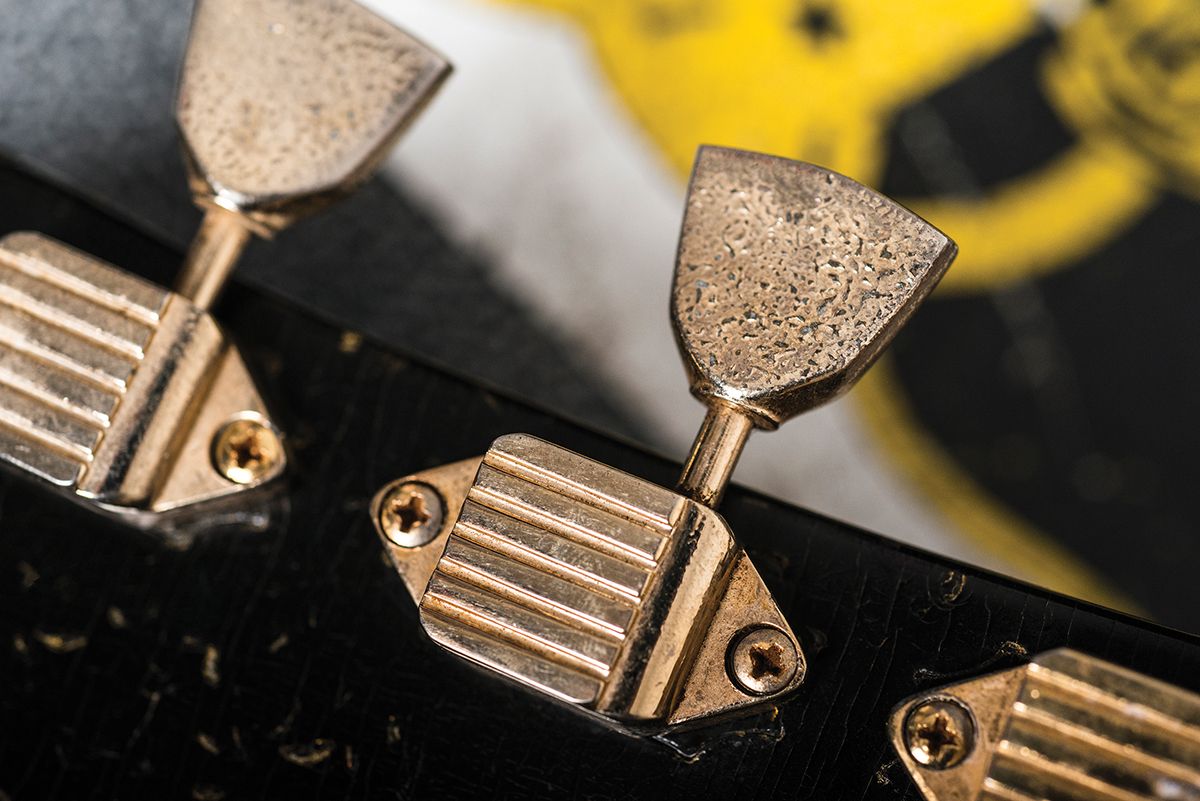 Single notes on the neck pickup have a percussive front end that’s more of a robust thump than a stinging slap, before easing into a flutey and pure sustain. Compared to PAF-style ’buckers, these are darker, however they’re mellow without being bland and when you match them with high-gain amp settings, it’s a complimentary combination for punk, power pop, heavy blues and hard-rock. The old-school Aerosmith sticker on the case is entirely appropriate… 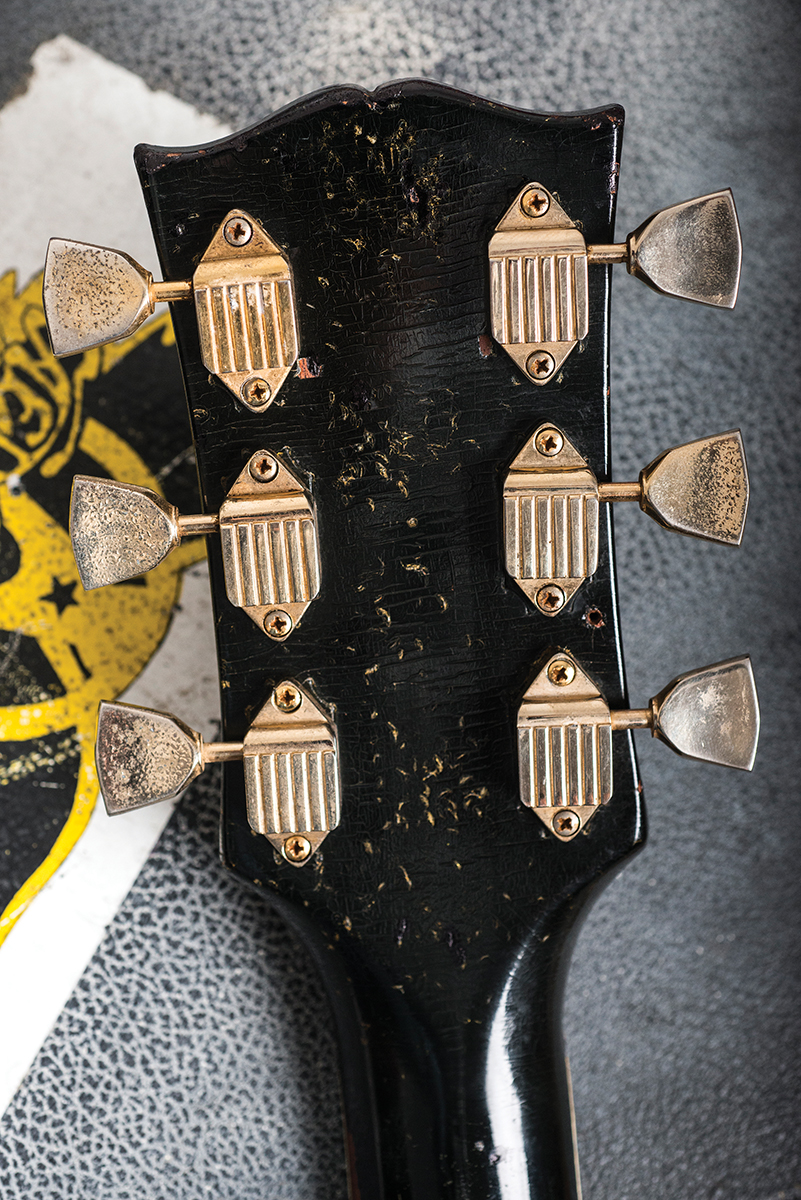