With one foot in 1969 and the other in 1970, this Fender Stratocaster is proof that the company was still making great guitars after the CBS takeover. 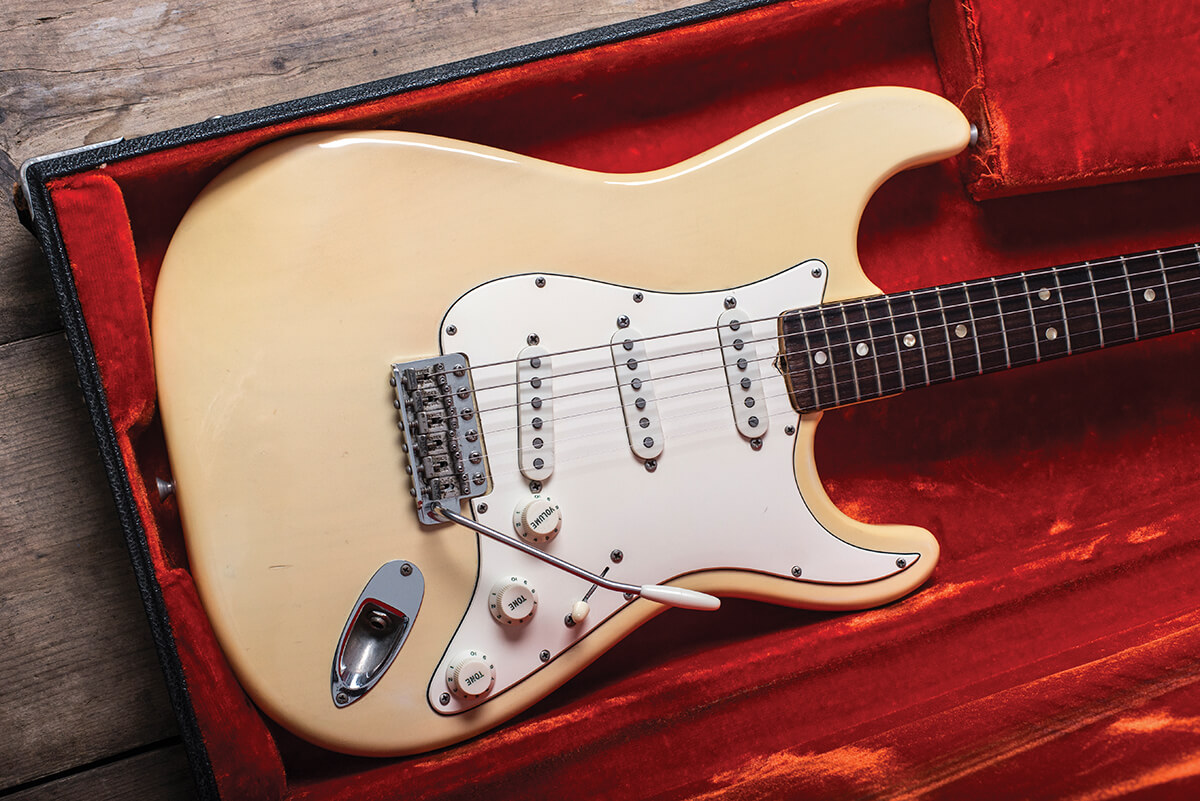 There are many well-travelled vintage guitar myths that don’t stand up to scrutiny and are not supported by any concrete evidence. One of the most frequently repeated among these is the notion that 1965 was some sort of corporate ‘year zero’ for Fender and nothing was ever the same again. The truth is far from that.

Firstly, Leo Fender stayed on as a consultant after he sold the company to CBS, and even helped to develop new Fender models. And from a Strat-specific perspective, many of the features we associate with the pre-CBS era lingered on into the 1970s – the 1970 Stratocaster we have here exhibits several of them.

We can point to the four-bolt neck join, the pressed steel saddles with a patent application that was still pending and the steel vibrato block held to the bridge plate by three hefty screws. Although Fender was using machine-wound plain enamel magnet wire and grey flatwork by 1970, the staggered alnico magnets survived – albeit without their hand-bevelled edges. 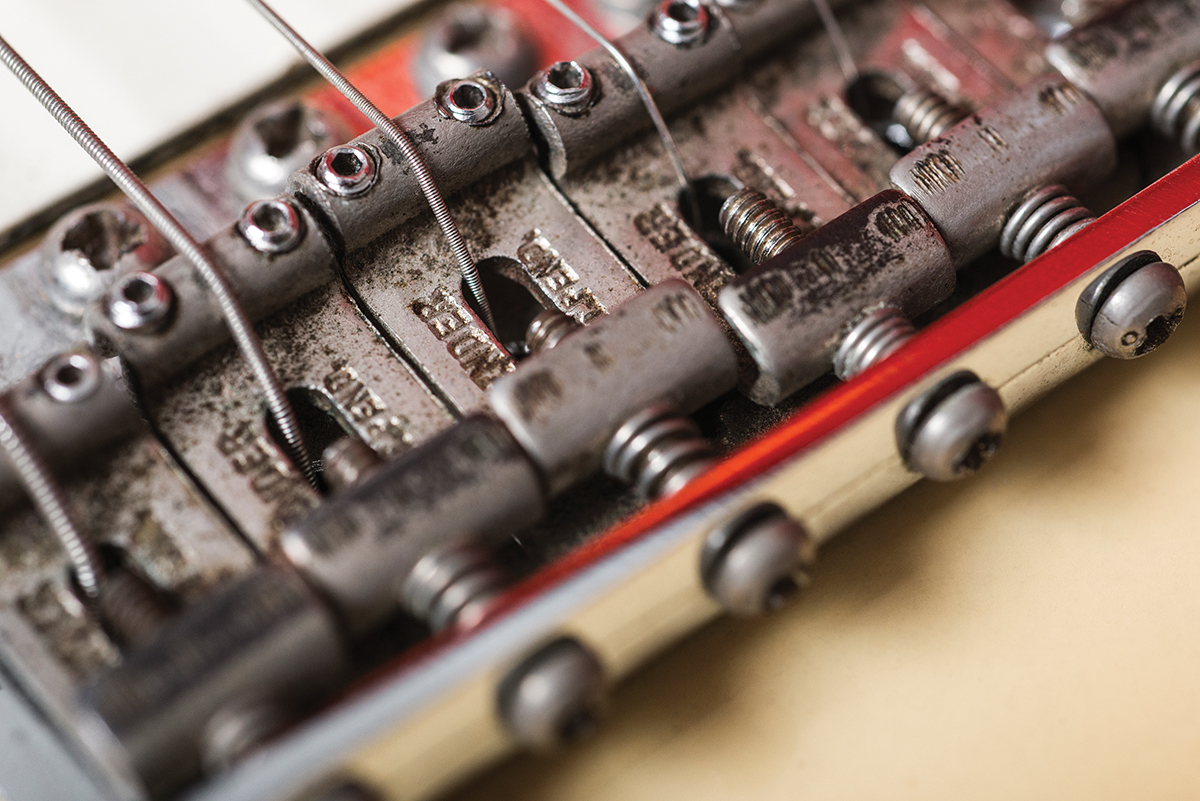 The bridge saddles are of the pressed steel variety, still with the familiar ‘patent pending’ stamp

Post-CBS Stratocaster bodies are generally supposed to be on the heavy side – in particular the ash ones. However, our blondie’s ash body is light enough to have been made from leftover 1950s timber stock. The neck retains some of the older features, too. The clues can be seen beside the neck pickup, where the truss rod adjustment nut is located just below a rosewood veneer fingerboard.

Although neck construction, neck attachment and bridge assembly had remained essentially unchanged from around 1963 onwards, other things were no longer the same. The later features divide opinions today just as they did when this guitar was made. 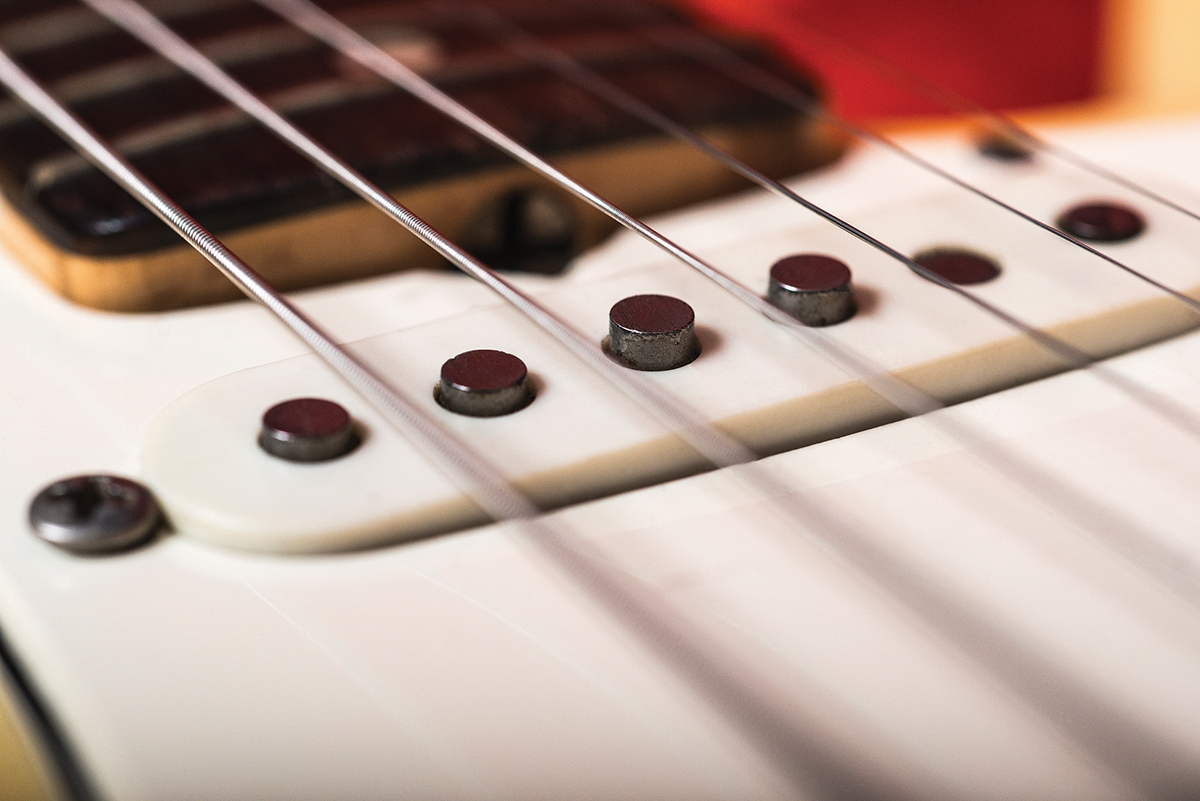 By 1970 the pickup edges were no longer hand-rubbed, but the polepieces were still staggered

The most obvious break with the pre-CBS era is the reshaped headstock that was introduced in December 1965. Fender’s Richard Smith explains that this was done simply to accommodate a bigger decal, but in the process “unintentionally ruined its visual balance”.

If you grew up idolising Hendrix, Blackmore or Malmsteen, you may well disagree. The logo certainly showed up better on television and CBS’s heightened brand emphasis extended to the F-stamped tuners and neck plate. Although the tuners may look different, they retained Leo Fender’s clever drilled post design and they feel much like the earlier Kluson types to use. 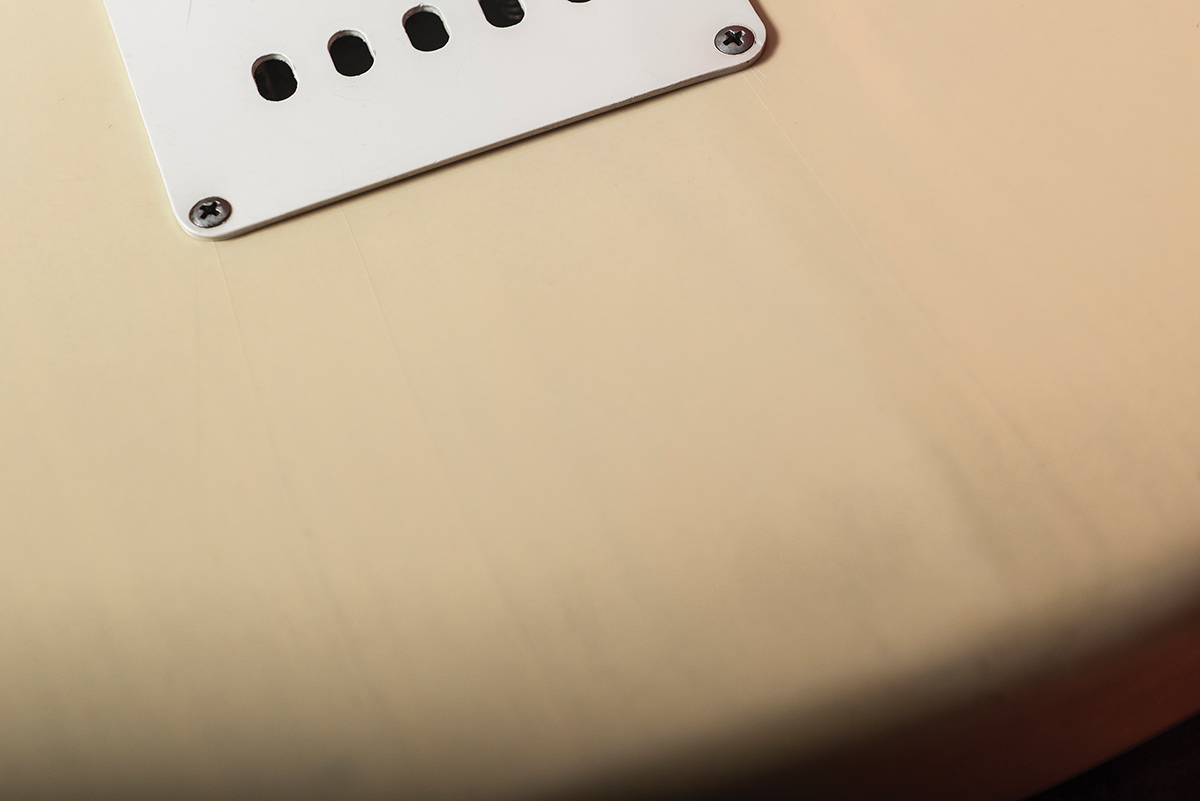 Even more controversial was the decision to switch from cellulose to aliphatic urethane (aka poly) finishes. According to all the sources, a 1970 Stratocaster should have a poly finish, but the true picture is somewhat more complex. Fender had been using a non-cellulose basecoat called Fullerplast since the early 1960s and some custom colours were actually acrylic rather than nitrocellulose. To complicate matters further, it’s reported that some finishes had nitro colours topped with clear poly topcoats, while others had poly basecoats topped with clear nitro. So what exactly is blondie wearing?

The answer is that we’re not entirely sure. Everything on this guitar glows under a blacklight exactly as you would expect vintage nitrocellulose to. Peeking under the spring cover we see three original springs and one newer addition, but there is hardly any tan line. 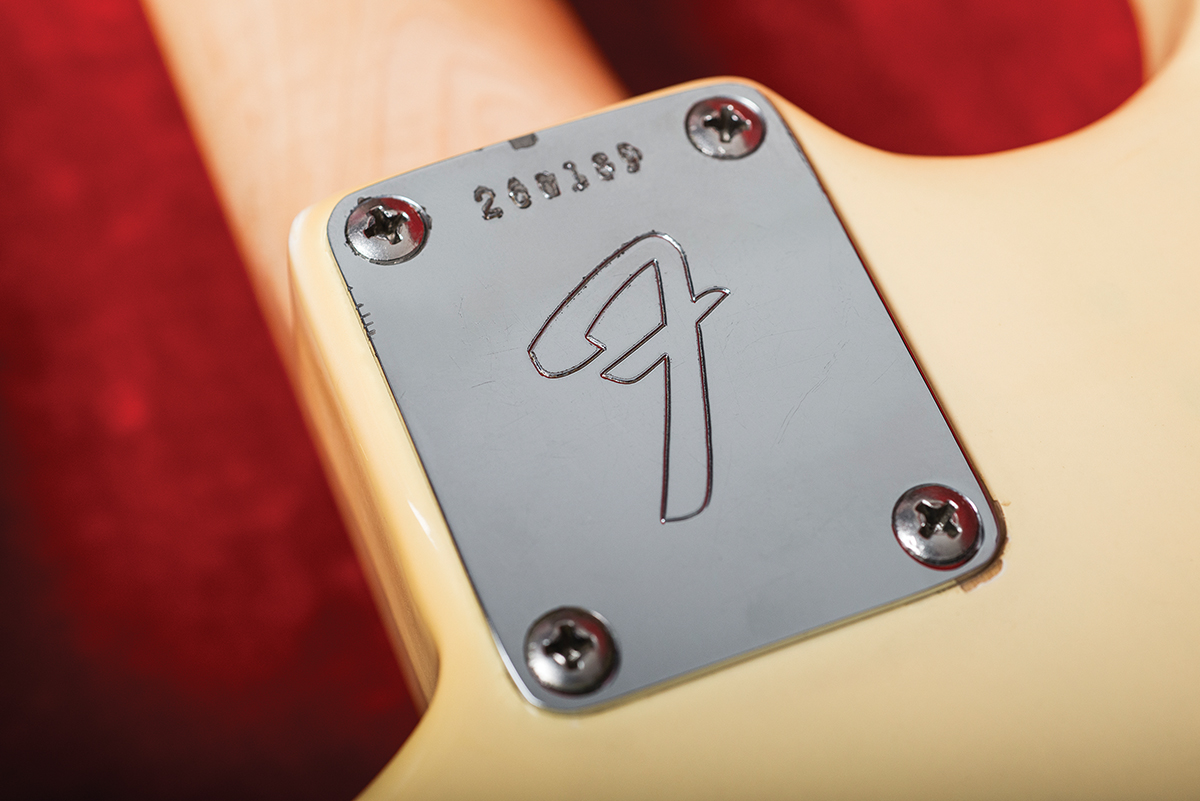 Despite this being a 70s Fender, it retains the classic four-bolt neck join

Blacklighting highlights minimal play wear to reveal a white base coat, but the finish condition is remarkable and we imagine the colour looks much the same today as it did when new. There are a few small dents and nicks, but no checking cracks whatsoever. So we’re betting on it being a very thin and attractive translucent poly finish, although the headstock face is most likely nitro because decals reacted badly to poly.

All the plastic parts check out, and the lettering on the knobs has turned a very vibrant shade of green. The seller informs us that the wiring is all original, with unbroken solder joints on the spring claw and output jack. A five-way switch was installed at some point but a period-correct three-way has been reinstated. 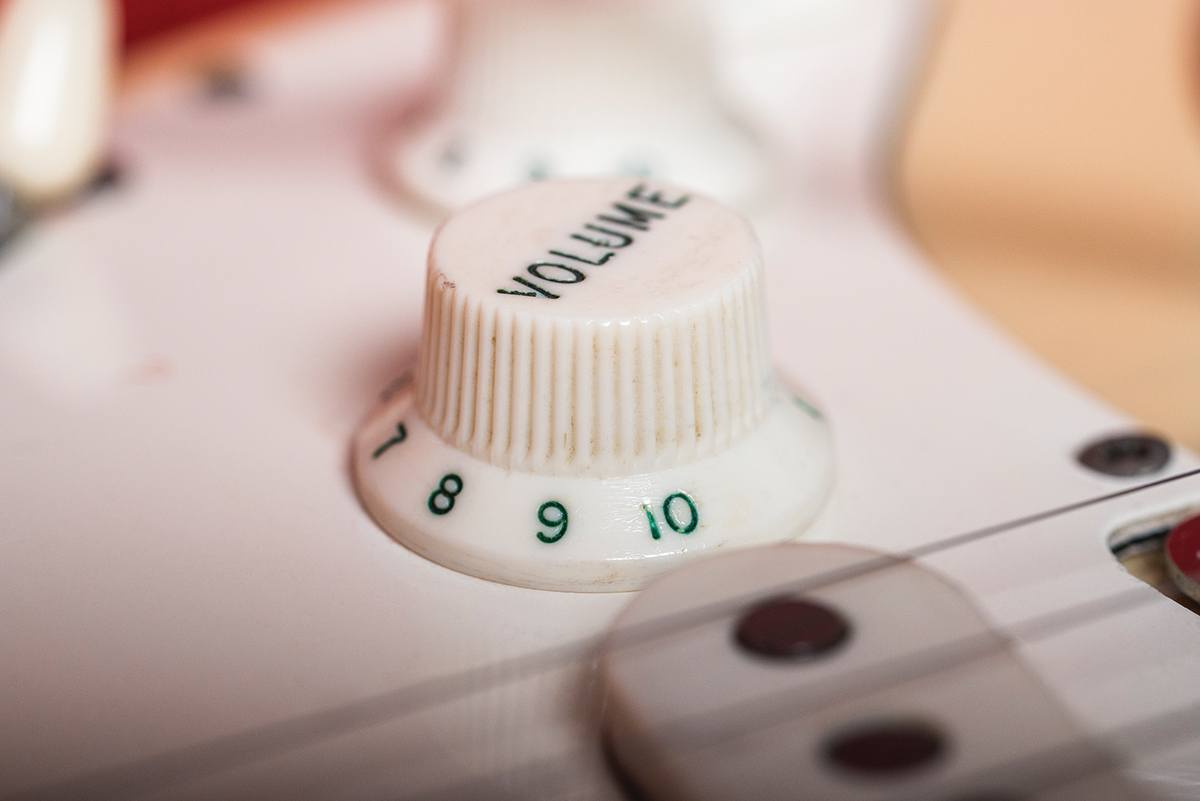 It is often said that vintage guitars that haven’t been played much probably weren’t very good to begin with. However, over the years we’ve seen several examples of vintage instruments with very little playwear that blow that theory right out of the water. Blondie here is one such example.

As alluded to earlier, it also disproves another widely held assumption that all 1970s ash-bodied Strats were ship’s anchors. Weighing just 7.6lbs, it has the feel and balance we associate with vintage Strats from the pre-CBS era and its lively, balanced, deep and loud acoustic tone compares favourably with a top-notch Stratocaster from any era. 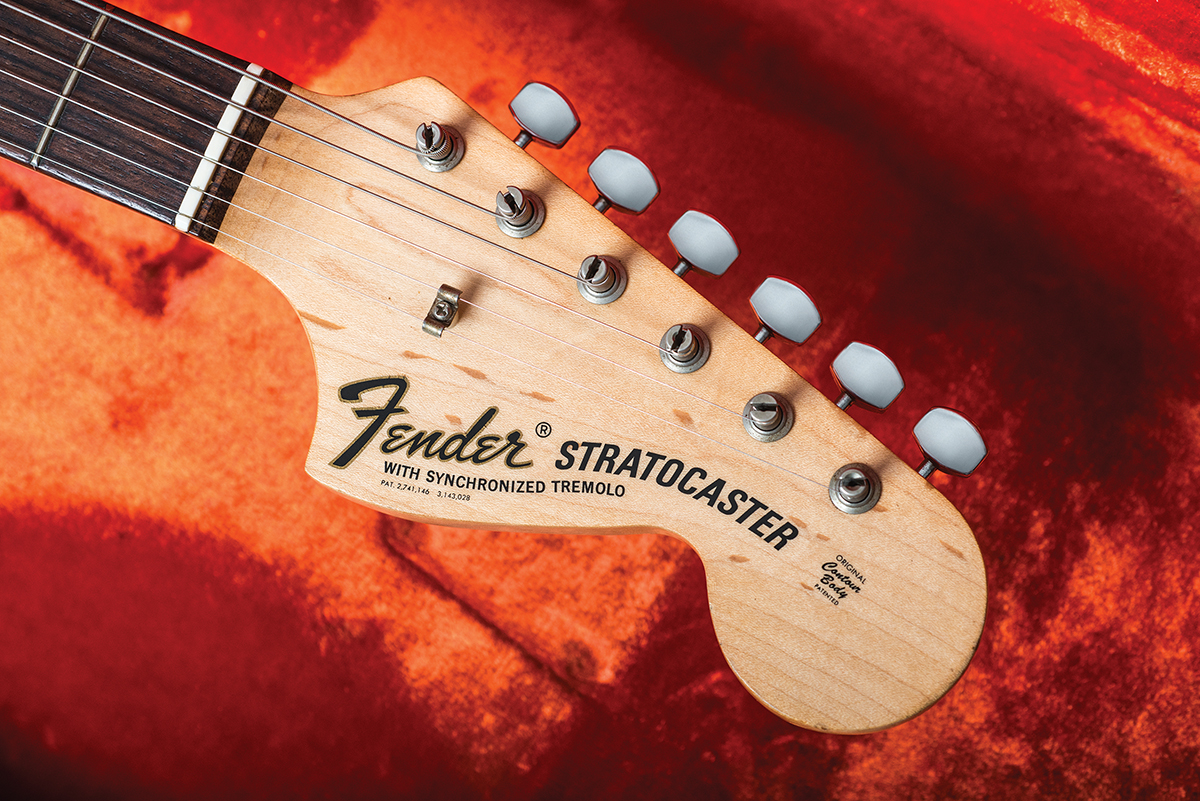 The enlarged headstock was a polarising change, but Hendrix fans will love it and the F-stamped tuners retain Leo Fender’s drilled post design

The neck feel is very much of its time with a fairly deep C profile that retains a relatively even depth from headstock to heel, and the 7.25-inch fingerboard radius requires the string action to be set a little higher to prevent bend chokes. Not that you’d notice, because it has a very slinky and played-in feel.

Plugging in, it soon becomes apparent that the guitar doesn’t deliver the chewy and powerful Strat tones typical of the instruments built during the first half of the 1960s. 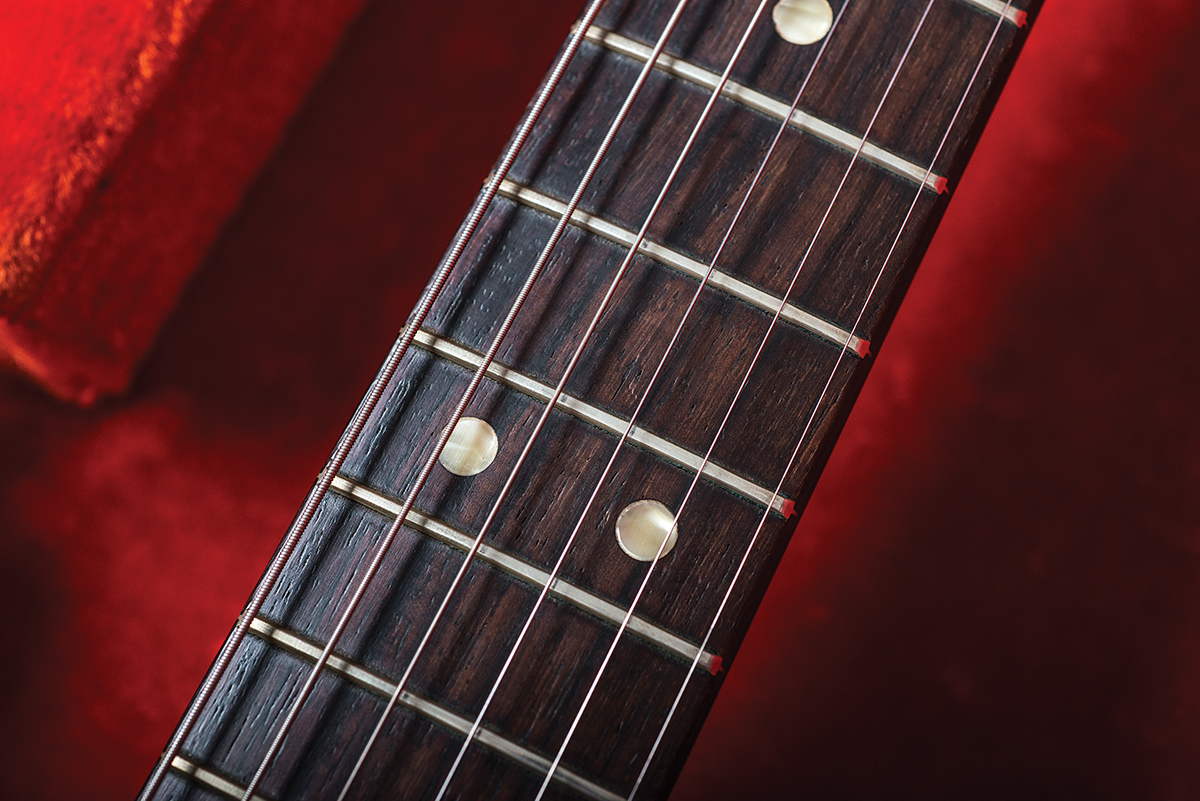 The rosewood veneer fingerboard’s 7.25-inch radius is a feature that remained unchanged following the CBS takeover

It has a brighter, snappier voice and slightly lower output than a Strat equipped with pre-CBS pickups. It’s certainly different, but pretty fantastic in its own way. There’s a wiry bite, a metallic edge and a sinewy sort of sustain that works really well for cutting blues solos and chord work. The definition is outstanding and – when you can find them using the three-way switch – the in-between positions are a funkster’s dream. 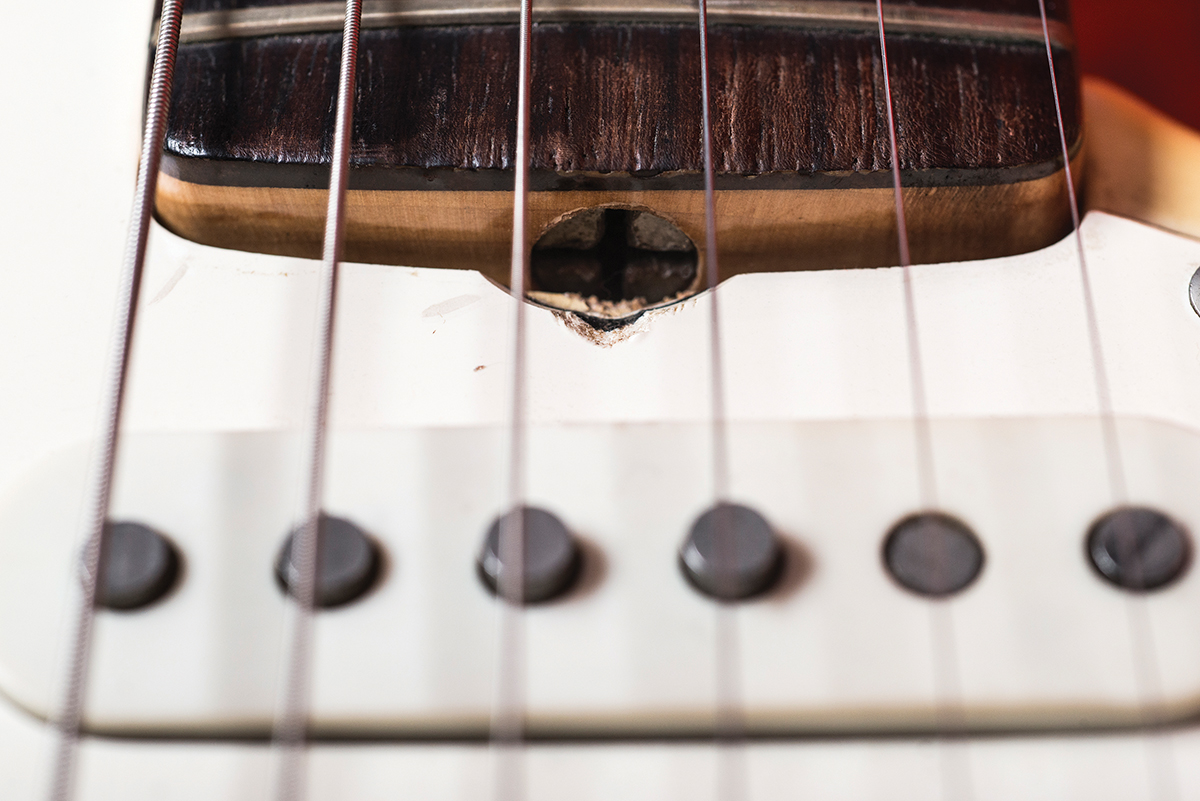 It’s not so much an inherent brightness that characterises the pickups, but rather a less forward midrange. Once you figure out how to set the tone controls of your dirt pedal, this can work to your advantage. Glistening cleans can morph into heavy overdrive, while retaining high midrange cut along with tightly defined lows and superb touch dynamics.

Blonde Strats from this era are rare and it’s unlikely that many survive in such ‘time capsule’ condition. Ultimately our time with this example teaches us that although some things had changed, Fender was still making outstanding guitars at the end of the 1960s. 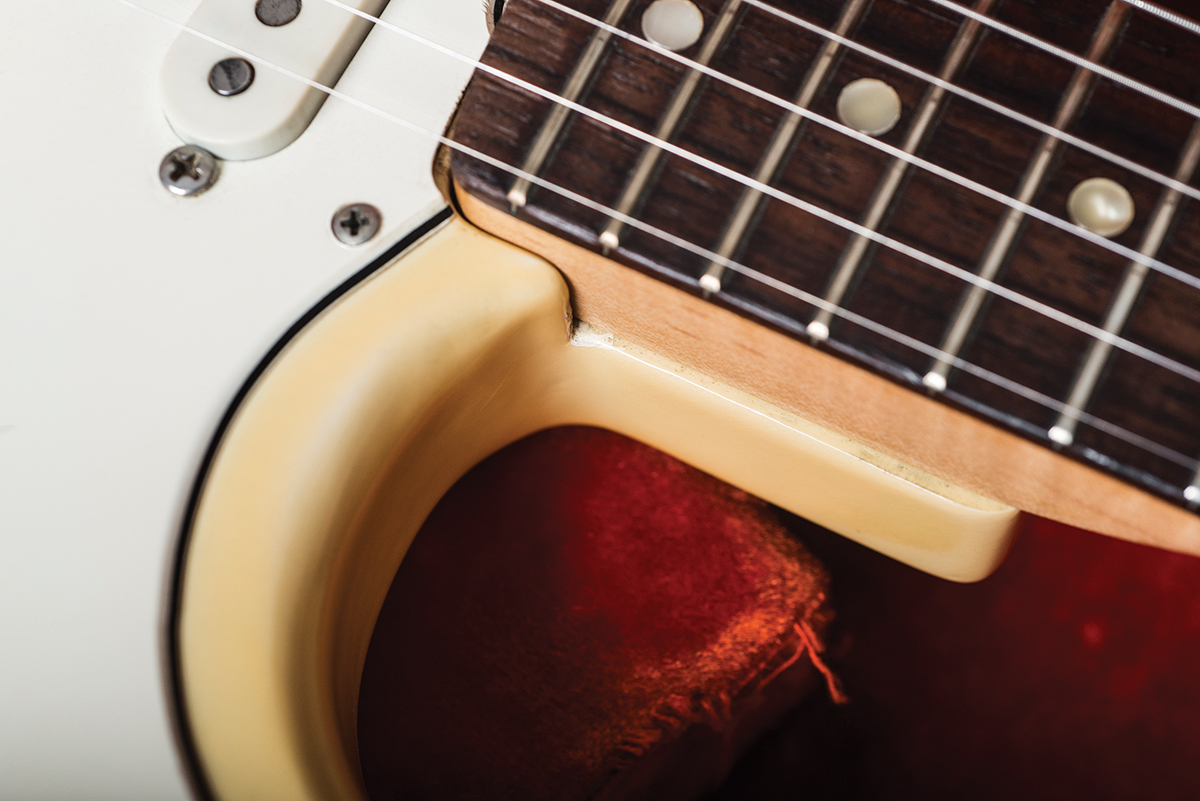 The neck pocket isn’t exactly a snug fit, but it doesn’t have any ill effects when it comes to this highly collectible Strat’s tone and playability