Wireless systems used to be reserved for gigging musicians but more and more players are finding them useful at home. How does this affordable, low-profile system from Mooer stack up? 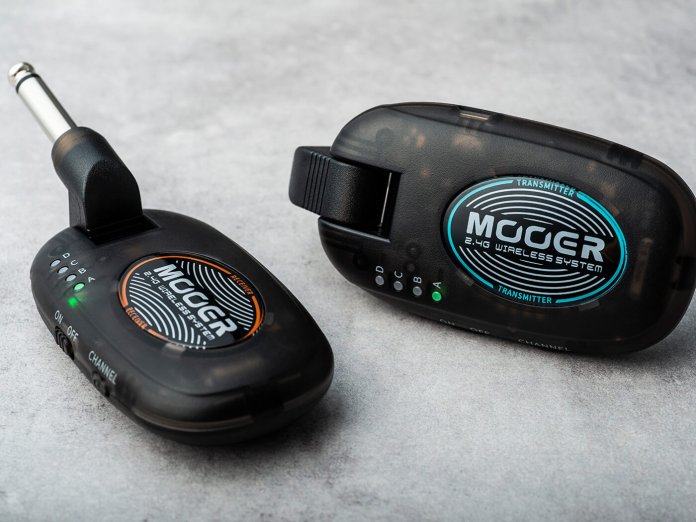 For the past decade, Mooer has been serving up small-scale, punchy effects with an emphasis on innovation, features and sound quality. Its latest offering, the company’s first venture in this arena, is the Air P10 2.4GHz wireless system, which aims to make your cable-based woes a thing of the past.

Today’s wireless systems are a huge improvement on those of old, with negligible weight, user-friendliness, and a resistance to interfering frequencies that minimises the the risk of a Spinal Tap-style wireless disaster. The Air P10 system comprises two parts, a transmitter which plugs into your guitar, and a receiver that plugs into your amplifier, pedalboard or audio interface. So far, so simple.

With semi-translucent plastic cases that have something of a Tamagotchi vibe, the two units are visually identical except for a colour-coded label and tiny lettering denoting their respective job descriptions. That’s all well and good in broad daylight but in the heat of battle under stage lights, it may not be enough to avoid confusion. We would have welcomed a tactile difference too.

Both units run off an internal rechargeable lithium battery which gives an industry standard five hours of life, and the bundled USB charging cable offers twin plugs, allowing you to charge both units at the same time. Good thinking.

While Mooer recommends keeping the receiver at least three metres away from any sources of potential interference such as wifi routers, we don’t experience any problems at a closer range. This could be very good news for streaming musicians looking to keep their cable management as simple and effective as possible.

Plugging in and making a loud noise is the work of a moment. The transmitter and receiver link up automatically and there are four individual channels available so you can link multiple instruments to the same receiver, which is handy too. The units’ plastic construction keeps the weight down and we feel confident that even the most expressive shape-throwing is unlikely to lead to the transmitter working its way out of a jack socket.

The Air P10 boasts an impressive range of 90 feet, which we test with some street-based riffage. Despite the distance and intervening walls the sound quality – with less than 5 milliseconds latency – is very close to that experienced when going straight into the amp with a short lead. Adding a pedalboard to the chain does give a slightly spongy feel to the front end of the note, and while this is less noticeable with an electric guitar, the contrast is more pronounced when using an acoustic guitar fitted with a K&K soundboard pickup.

Anyone considering a wireless system will be looking for ease of use, reliability of performance and good sound quality. The Mooer Air P10 performs strongly in all these areas and has the added attraction of a very accessible price point.