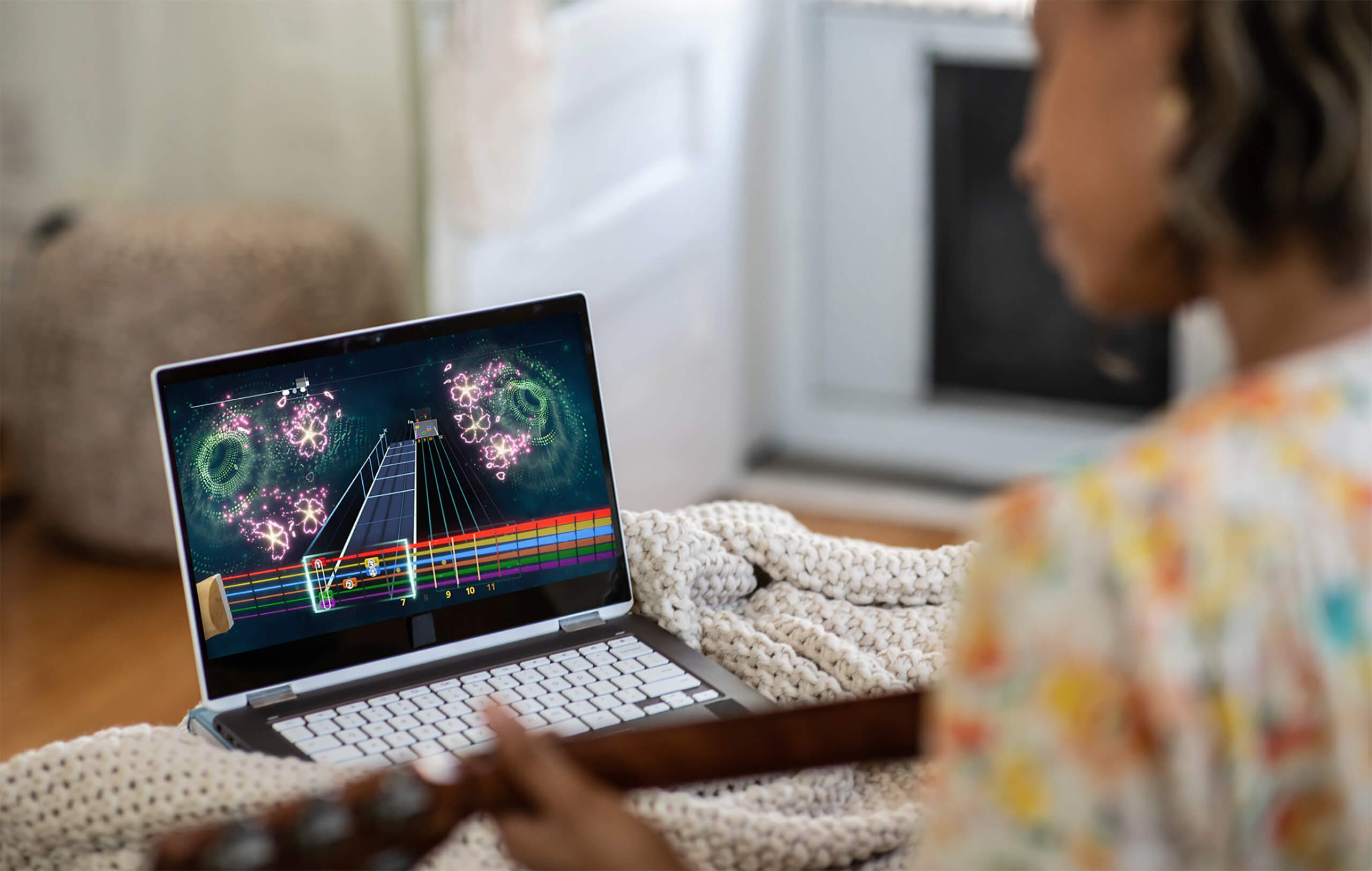 The Big Review: Rocksmith+ – is this new video game now the best way to learn guitar?

New PC game Rocksmith+ is a brilliant way to learn guitar or play your favourite songs – provided it has them in its library.

Despite hardware pains and a questionable catalogue, Rocksmith+ can be a valuable learning tool for new players.

The original Rocksmith came out in 2012, and offered an interesting twist the Guitar Hero/Rock Band musical video game fad that filled houses (and later landfills) around the world with instrument-shaped plastic controllers – what if instead of a plastic guitar, you used a real one?

The original game was well-received, and now a year on from its original planned arrival we have a sequel of sorts, that presents an intriguing proposition. Though it’s wrapped in the guise of a flashy video game, Rocksmith+ is in fact a subscription-based service that proves a handy educational tool designed to teach users how to play guitar or bass.

Available only on PC for the time being, Rocksmith+ has a catalogue of over 5,000 songs and presents each one with a live, interactive tab to play along with. In these tabs, notes and chords float onto a virtual on-screen neck as they’re played in the song, and you’re tasked with hitting each one as they land on the tab. If you’re using Rocksmith+ to learn a song from scratch, an adjustable difficulty slider means you won’t be thrown in at the deep end – at first, Rocksmith+ will feed you very few of a song’s notes, but when it thinks you’ve got the basics down, it starts to nudge the difficulty slider from 0 per cent to 100. Single notes will eventually turn into chords, while a barebones solo will be fleshed out with more notes to hit, complete with hammer-ons, slides and the like to master.

If you’re feeling plucky – or maybe Rocksmith+ has overestimated you – it’s possible to adjust the difficulty scale at any point, meaning you can spend more time on the basics or skip ahead to learning the song in full. There’s also an in-depth replay section, which is perfect for practising a particularly troublesome solo or chord change on a loop. For anyone that would rather focus on specific techniques or styles, a fairly thorough library of tutorials and exercises are also available on the service.

Each of Rocksmith+’s tutorials begin with a video of someone playing through the subject and explaining what to focus on, and lead on to a live exercise for players to try out. These range from basics for beginners – playing fretted notes and open chords – to more intermediate techniques such as muting and tremolo. There’s even a separate section for advanced styles, which explores the theory and shapes behind genres like Texas blues and pop punk. In general, most of the tutorials cater toward newer players – yet their relative simplicity and hands-on teaching mean they feel like a very capable way of helping a first-timer get to grips with their instrument.

However, we experience some significant technical issues with the way Rocksmith+ detects note input, which led to lots of frustration. In theory, the service offers three ways to play – you can use a microphone or Rocksmith+’s mobile app to listen to your playing, or you can plug in a pricey £25 Real Tone Cable to play directly into the game. If you happen to have an existing USB audio interface, developer Ubisoft has confirmed that third-party options are supported as a beta feature, but they can’t guarantee compatibility for all brands and models. That’s frustratingly unclear, but it might be worth trying it out before you drop some cash on Ubi’s proprietary cable.

In reality, we found that while Rocksmith+’s mobile app was decent at picking up an acoustic guitar, it struggled to detect notes from an amplified electric guitar, which resulted in many notes not being picked up. Meanwhile, trying to use a headset microphone option was wholly futile.

That left us using the Real Tone Cable, which eliminated all problems with note detection and made the service feel incredibly responsive.

For anyone serious about using Rocksmith+ as an educational tool, it felt like the Real Tone Cable was a necessity – something that’s unfortunately not made immediately clear by Ubisoft, and something that adds a significant cost to the package.

Another issue for Rocksmith+ is its library of songs, a mixed bag that’s a far cry from its competent selection of tutorials. At first glance, the catalogue of over 5,000 songs looks like an inviting buffet. There’s 16 genres to jump into, though some are far more prevalent than others – rock, pop and latin all boast over 1,000 tracks each, while blues, metal and jazz tracks number in the low hundreds.

Despite some disparity, the library is still big enough to include something for everyone. Unfortunately, Rocksmith+’s catalogue isn’t as expansive as Ubisoft would have you believe. There may be 5,000 songs to play, but not every track is unique – there are no less than seven versions of California Dreamin’ alone, and certain artists hog the spotlight more than others: there’s over 100 songs by The Clash, and over 60 from Frank Black, but many staples – think The Beatles, The Rolling Stones, Hendrix, Nirvana, to name a handful – remain questionably absent.

Furthermore, too much of the library consists of live renditions, which can make learning a song difficult thanks to the frequency of improvisation at live gigs. Again, Frank Black is a great example: the only Pixies tracks to be found are live renditions covered by Frank Black and the Catholics, which means players looking to learn tracks like Gouge Away or Where Is My Mind will end up learning versions that don’t quite line up with the known-and-loved studio version.

Likewise, The Cure’s only appearance is in a live album from 2011. Ubisoft has claimed that Rocksmith+ will eventually have “millions” of tracks on offer, but right now it feels like the developer has scooped from the bargain bin of a record store to save on licensing fees. The result is a library that feels bloated, inconsistent, and unfulfilling.

As it stands, Rocksmith+’s uneven catalogue could cynically be judged as a means to drip-feed bigger songs into the service, keeping customers on the hook for longer. However, for the songs that are available, it’s undeniable that Rocksmith+ is accurate, engaging and helpful enough to teach users how to play them. Those new to playing guitar will benefit from the easy-to-follow tutorials and simpler songs, while more experienced players are likely to appreciate the service’s intuitive difficulty system and range of complex exercises to run through.If you’re happy with the songs on offer and want to make your practice a bit more exciting, Rocksmith+ delivers enough to justify its monthly subscription fee – but if the launch-day library doesn’t suit your taste, hold off on buying this for a couple of months.