The award-winning Alvarez AD60 looks to offer a bold voice in an affordable package. 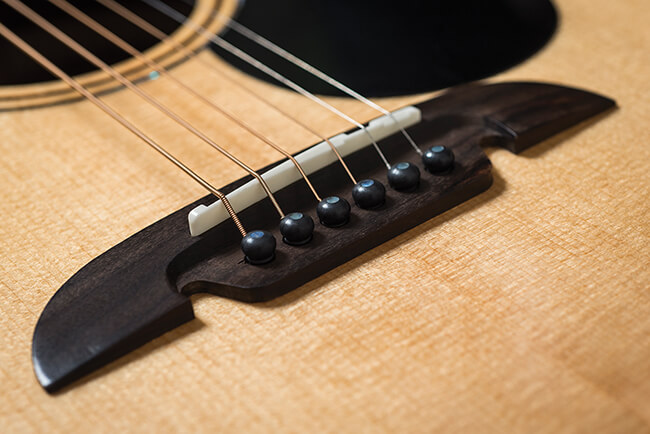 Alvarez might not be as well known or widely available as other brands in the acoustic sector, but for over 50 years now the US-based company has been producing guitars that have proved reliable, affordable and well made. In doing so, Alvarez have been seen in the hands of a wide range of artists including Ani Di Franco, Monte Montgomery, Thom Yorke, and a certain Joe Bonamassa. Now, handled in the UK by Blackstar Amplification’s Dist-X distribution arm, Alvarez’s profile and appeal on these shores is growing. 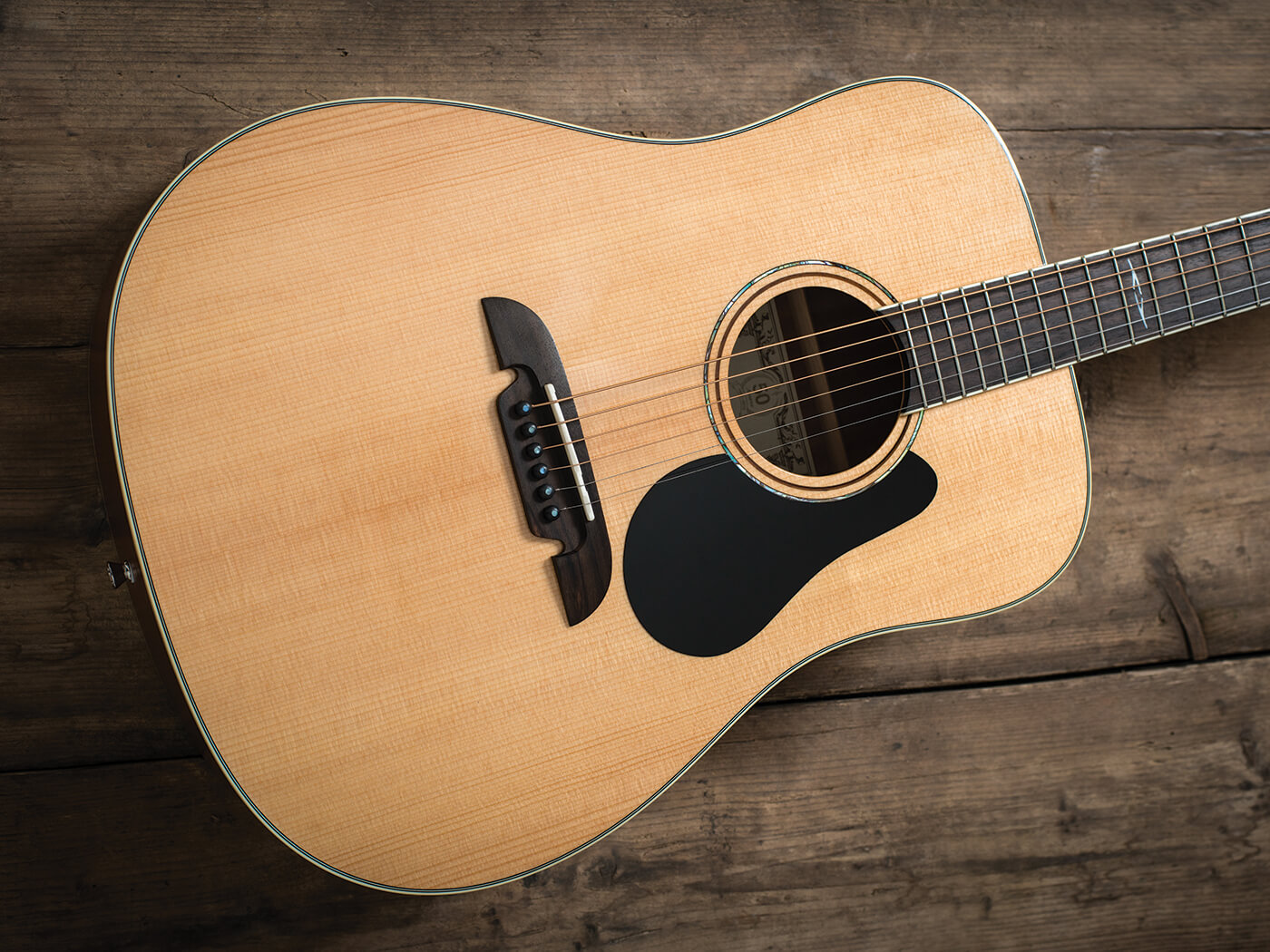 The AD60 is part of Alvarez’s entry-level Artist series although, based on first impressions, the AD60 looks anything but budget. Boasting sleek, simple lines and ‘less-is-more’ decoration, the AD60 is an uncomplicated dread. Alvarez’s plan here appears to be to place emphasis on quality materials and construction techniques rather than unnecessary bling.

In terms of its dimensions, the AD60 is every inch a full-bodied dreadnought. Side by side with a Martin D-18, the AD60 is identical, but from having a deeper body by two millimetres.

The AD60 is constructed with a solid, supplier-graded, A+ Sitka spruce book-matched top that possesses a near ruler-straight, well-defined grain. Both the top and back of the guitar has been bound with an ivory-coloured, aged-effect binding that is augmented with a double-tracked, black pinstripe (top only). The same material binds either side of the rosewood fretboard and also serves as the heel cap. The AD60’s back and sides are a mahogany laminate with the back again being book-matched. 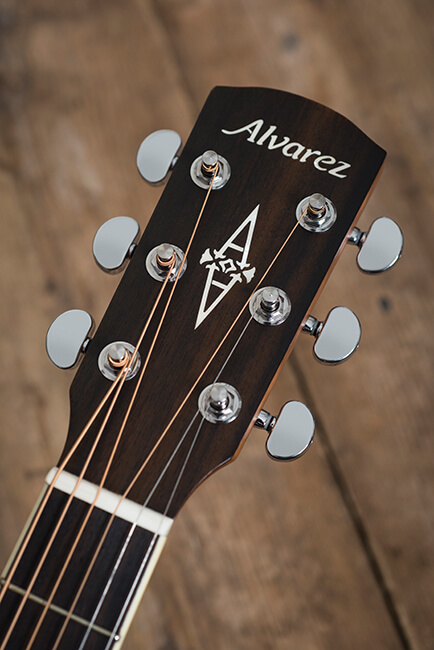 Mahogany is also used for the two-piece, low-profile ‘C’-shaped neck. Atop the soundboard is a scoop-shaped black coloured pickguard, a dual-ring soundhole rosette – one of which is pearloid – and the distinctive Alvarez bridge which is ‘bi-level’. This type of bridge design is sometimes referred to as stepped, and the section of the bridge that accommodates the bridge pins is scooped-out and set four or five millimetres lower than where the bone saddle sits. This results in a greater string break angle.

Much has been written about the impact the angle at which strings pass over the saddle has on a guitar’s output and performance, so it’s good to see Alvarez tick this box on what is an inexpensive guitar. It gives further evidence of the company’s desire to produce guitars that squeeze every last drop of tonal performance out of the tonewoods employed.

It’s also good to see that Alvarez has given thought to the AD60’s bracing pattern, which is referred to as FST2. The omnipresent X-brace design has been forward-shifted, pushing the axis of the X closer to the soundhole. The concept behind the design is to increase the area of the soundboard that is behind the bracing, thereby freeing that area to move more freely; more movement – more volume and response.

Also, both the X braces and asymmetric tone bars are scalloped which, again, serves to give the guitar’s top more room to ‘breathe’ and vibrate. Neither forward-shifting nor scalloped bracing were Alvarez’s concept initially, but the inclusion here of construction techniques usually reserved for higher priced guitars again speaks volumes about the company’s emphasis on tone.

Moving to the top end of the guitar, we find a bone nut, and unbranded, enclosed, chrome-coloured tuners that, although not the smoothest on the market, are certainly sufficiently stable and robust for purpose.

The AD60 is presented with a gloss top, and a semi-gloss finish on the back, sides and neck that makes for a very ‘earthy’ feeling guitar. There are a couple of small areas – mostly around the waist – where the finish is not as smooth as it might be, but overall the finish is good and makes for speedy and comfortable navigation around the neck.

Overall, the AD60 gives evidence of excellent standards of build standards and quality control. The 21 medium frets are beautifully finished, while the body and neck binding is clean and tidy. The marriage of design and craftsmanship on show here is perhaps best exemplified by the curved fretboard end, which follows the circle of the soundhole. The cut is spot on and as smooth as you like. Top marks to Alvarez for producing such a well-built, good looking guitar. 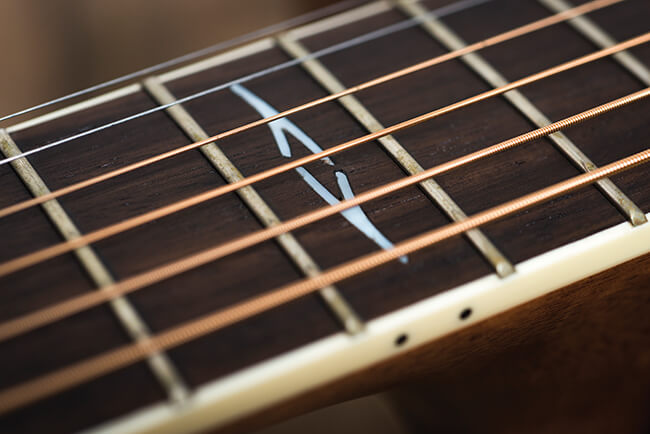 Justifiably impressed with the presentation and build of the AD60, we’re keen to grab a pick and start putting it through its paces – good looking guitars call-out to be played.
Playing the AD60 while seated, the guitar is no more cumbersome than any other regular dreadnought you’ve played. However, using a strap (thanks Alvarez for fitting two buttons!), the extra couple of millimetres of depth is noticeable and the AD60 feels a smidgen bulky.

With a medium pick in hand we strum some first position chords and are impressed with the bold, punchy tone. The AD60’s output is full, round and unflinching. Chords carry good projection right the way up the neck, and we like the overall balance which is as good as you’ll find on any dreadnought at this price point.

Switching to some choppy riff work, the AD60 again proves itself to be more than capable. While the overall tone has plenty of mids, it doesn’t get anywhere near brash or metallic. In fact, play softly and the guitar purrs with a smooth timbre well-suited to ballads. Aided by the super-fast neck profile, single-note and solo duties are a breeze and, when played alongside another similarly priced dreadnought, the AD60 is able to cut through without any problems. 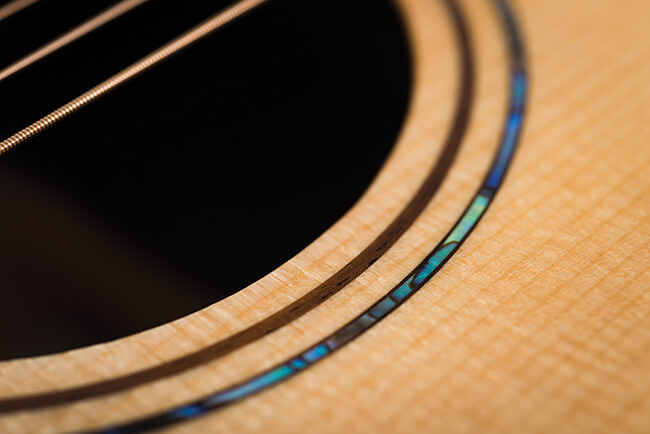 We even dabble with some fingerstyle playing and, again, can’t help but be impressed with how balanced, open and rounded the overall tone is. If truth be told, after an hour or so of playing, we have to remind ourselves of the guitar’s price point. So good is the AD60’s performance, we’d suggest it would still represent good value for money at twice the price.

Alvarez has produced a guitar that further proves the point that, if build quality and tonewood selection is good enough, customers need not be put off by the fact that a guitar isn’t all solid. High quality laminate back and side guitars can be pleasing and rewarding while being friendly to our wallets. 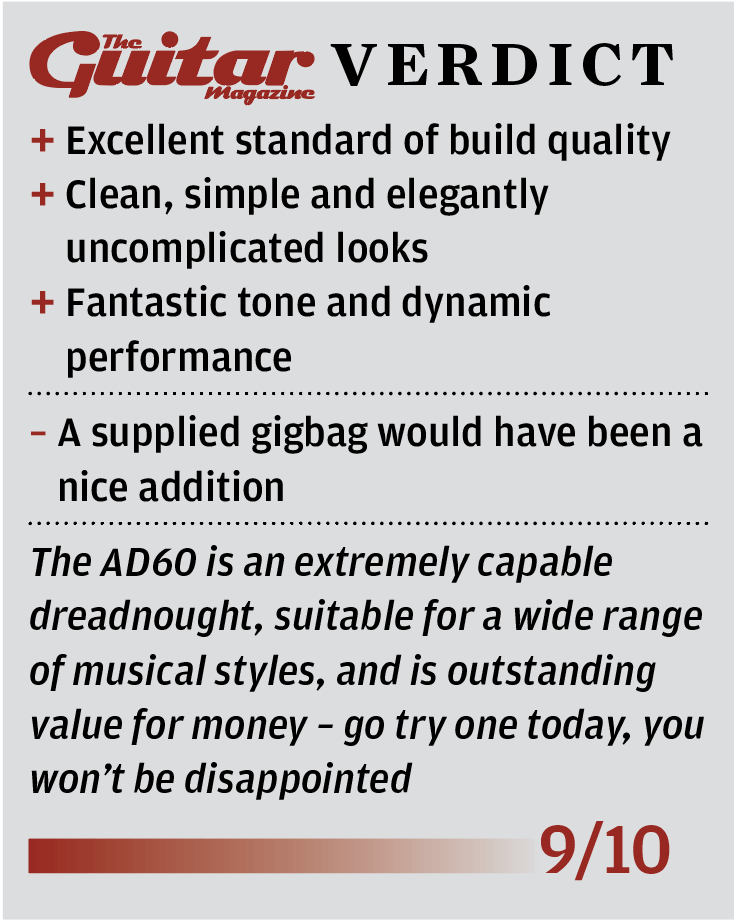