The Tel Aviv company has moved into acoustic guitar production with a distinctly vintage vibe. And just like the Little Sister electric, you can custom-order a Private Build or buy a factory-made Crossroads straight off the rack. 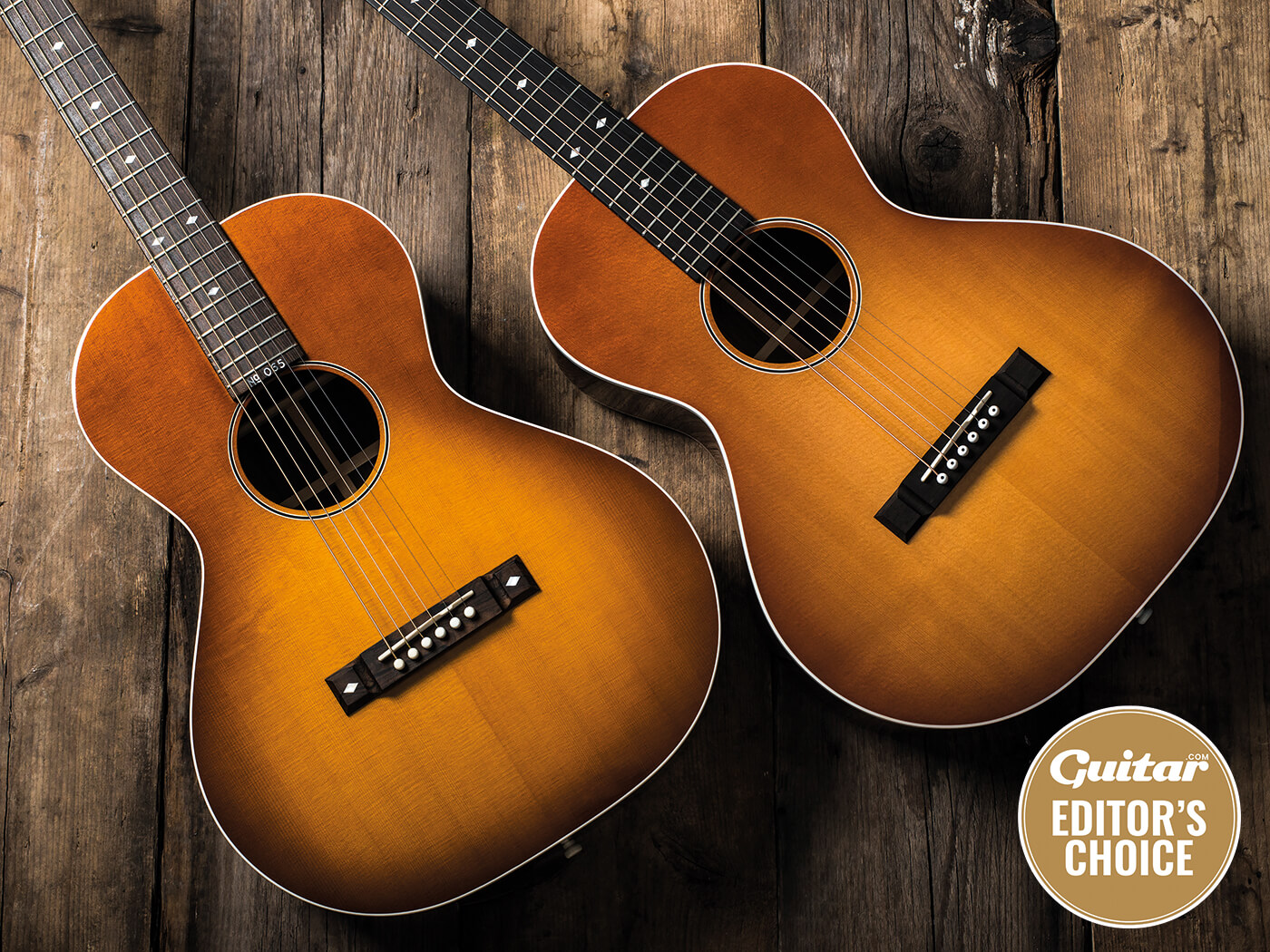 When a 1904 Oscar Schmidt Stella landed on the workbench of one of B&G’s co-founders and head luthiers, Kiki Goldstein, he came to love the guitar so much he bought it. Over time, he decided to try and create his dream acoustic guitar by combining the comfort and the vibe of the Stella with a bigger and richer tone.

Kiki had to determine the best shape and depth, find the right bracing pattern, work out the optimal top thickness and scale length – and more besides. The process took almost two years and the result is the B&G Caletta – named after Robert Johnson’s wife, Caletta Craft – with a body size between a 00 and 000.

B&G describes the Caletta as being “made according to traditional American lutherie”, however, some innovations have been made to enhance durability. Principally, these include reinforcing the upper bout with dual upper transverse braces to guard against top deformation and a Spanish cedar neck block with an extended ‘tongue’ that protrudes along the back.

The latter is intended to lock the neck angle in, with the help of a deep tenon, to create a gluing surface four times greater than that of a traditional dovetail joint. All Private Build tops have been air-dried for over 20 years and they’re tuned individually. Hide glue is used throughout and the final voicing is done after the guitar is assembled and strung. A variety of finish options are available in gloss and open-pore nitrocellulose.

Just like B&G’s Private Build electrics, the Caletta is available in a more affordable guise as the Caletta Crossroads. B&G contracted a small workshop in Korea and provided the craftsmen there with specialist training and all the necessary jigs and tools.

The proprietary neck joint and hot hide glue construction are the same, and at first glance, there’s little to distinguish the Crossroads from the Private Build. However, the finish is ultra-thin gloss urethane rather than nitro, and although customers can choose from a variety of options, they cannot custom-spec the guitars.

Given the differences in timber, and the fact that the Private Build comes strung with bronze rather than phosphor bronze strings, we’re not exactly comparing like with like. Even so, there’s no doubting the pedigree is the same.

Starting with the Crossroads, the first thing that strikes us is the neck profile. It’s a sublimely soft V that fits perfectly in the hand and feels entirely appropriate for this style of guitar. The Private Build’s neck is very similar, but the V is a little less pronounced and it feels more like the profile we have come to admire on B&G’s electric models.

But dare we say it, we prefer the shape, depth and extra width of the Crossroads neck. These guitars are clearly intended for fingerstyle players and for us, the extra width in particular makes the Crossroads a tiny bit easier to play – but without the dauntingly wide string spread that is so often part of the deal with slot-headed acoustics.

Considering the body size, the Crossroads generates far more volume and bass that we would have anticipated. There’s nothing boomy or overblown about it and the response is nicely extended in the treble, but the overall frequency balance is very even and balanced.

Having said that, the response is extremely quick and there’s a willing liveliness that gives the Crossroads a vibrancy and power that isn’t always present in similarly constructed vintage acoustics. The looks may be retro, but the tone isn’t. Yes, it lends itself perfectly to blues and country picking, but the sweet upper-harmonic sheen is not something we tend to associate with the dryer and woodier tones of vintage parlors.

The longer we play, the better the Crossroads sounds. Soon, we’re into open tunings and the bottleneck gets an outing – the playability and setup are remarkable, because fretting notes couldn’t be much easier, yet slide playing still sounds clean and buzz-free.

Swapping over to the Private Build, despite the price disparity between the two models, the tonal differences aren’t profound. We wouldn’t go so far as to say that the Private Build’s tone is indisputably superior to that of the Crossroads – it’s just different.

There’s a little more solidity in the bass and even more depth. At the other end of the spectrum, the treble isn’t quite as ethereal, but it’s a bit sweeter and gels more coherently with the overall tone to shift the emphasis ever so slightly to the midrange. The Private Build also has an even quicker and punchier attack that lends a nice percussive quality to the front of notes.

Even so, there’s a more mild-mannered quality to the Private Build and the tone is perhaps a little more refined. The Crossroads model’s tone seems mostly to come from the front of the guitar, but with the Private Build, there’s a sense that it emanates from deeper inside the body.

It’s hard to say how much of that is attributable to the contrasting tonewoods and how much is attributable to the way in which these guitars were built. Indeed, with three other Private Build timber combinations to choose from, we suspect that there’s something for all tastes. One thing common to both Caletta models, however, is that the boxy midrange honk typical of small-bodied 12-fretters is virtually nonexistent.

Where the Private Build romps into the distance is in terms of materials and the quality of the finish, although the Crossroads only suffers in comparison and taken in isolation, its build and finish impress greatly. But just as we have found with the Private Build and Crossroads versions of the Little Sister electric, B&G’s in-house nitrocellulose finish has a depth and richness of colour that is simply gorgeous.

The law of diminishing returns always seems to apply. If you’re prepared to pay a premium to get a Private Build made to your specs, you won’t be disappointed. But for the same money, you could have two Crossroads plus change, and it’s really not that much of a compromise.