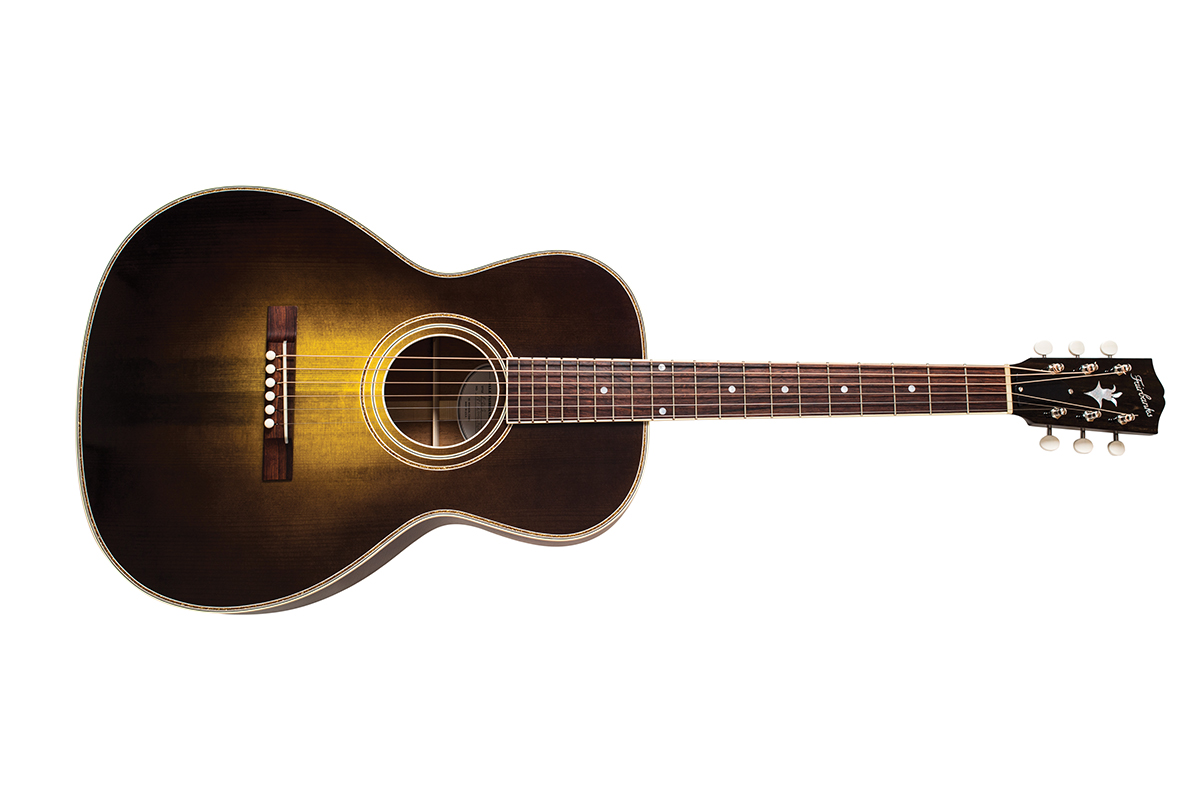 The early-1960s folk boom can be said to have kickstarted vintage guitar culture, as cash-strapped Llewyn Davis types consoled themselves with the notion that the old acoustics they could afford sounded better than the new ones they couldn’t. Vintage Martins and Gibsons soon became highly sought after and highly priced, and the rest is history.
Although often underrated as a guitar player, Bob Dylan always had pretty fine taste in acoustics, and by 1963 he was playing a modified and refinished Gibson Nick Lucas Special from the 1930s. It was the first artist signature model offered by Gibson, but the specs were spectacularly inconsistent.

At various times, bodies were made from rosewood, mahogany and maple, with the shape and dimensions changing. Bridge styles varied and some even shipped with a trapeze tailpiece. What’s more, neck joins were made at the 12th, 14th and even the 13th fret. Dylan’s was a 13-fretter, and it’s the one with the Fleur-de-lis headstock inlay seen in countless mid-60s photos.

Dale Fairbanks is a rising star in the American acoustic-building community. Working from his home workshop in West Hartford, Connecticut, he specialises in recreations of classic Gibson acoustics. For his F20 model, he has chosen to replicate a 1930s Nick Lucas, with the later small but deep body style and a 12th-fret neck join. 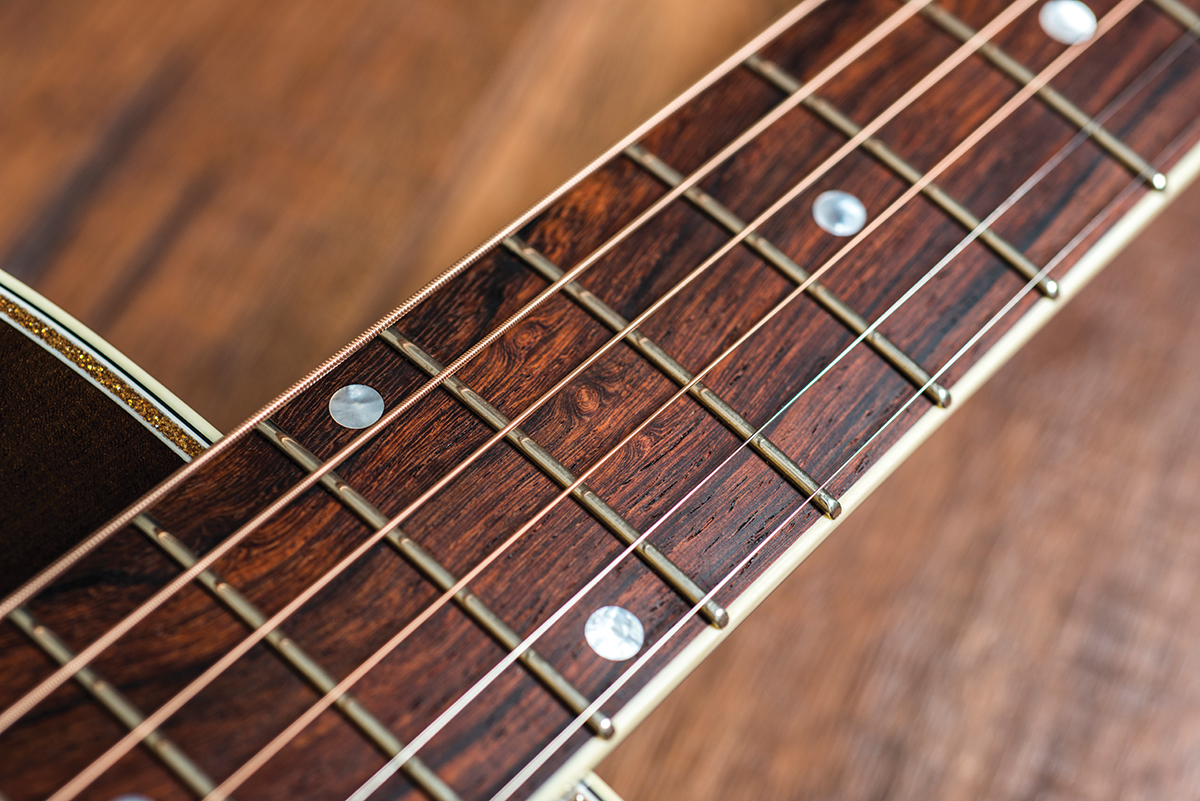 This reviewer must confess to spending the first few minutes of the review process with his nose stuck in the soundhole, breathing in the heady aromas of timber and wood glue.

Admittedly, smell has little or no bearing on tone or playability, but with tonewoods such as this it’s very much part of the pleasure. This intimate encounter with the F20’s body parts also reveals the extraordinarily high standard of the build. There is no glue squeeze-out whatsoever and, for the most part, the inside surfaces are smooth enough for spraying.

The back braces are the most delicate we have ever seen. All four are barely a quarter of an inch wide, and they’re carved tall and thin, tapering gracefully to a depth of around 1/16” as they tuck under the kerfing. The upshot is that the back is exceptionally resonant, and it responds much like a drum skin when you tap it.

With an inspection mirror, we can see that the top braces are also carved with great finesse and the intersection of the X-braces is the neatest we have ever encountered. In authentic vintage Gibson style, the X-braces are non-scalloped and the bridge plate is maple.

All the materials are top-spec, with a red spruce top and Honduras mahogany back and sides. The Madagascar rosewood fingerboard and bridge look fabulous and the timber is enhanced by a nitrocellulose-over-shellac finish. The sunburst actually looks as though it might have been hand-applied rather than sprayed – just as Gibson did it back in the day. 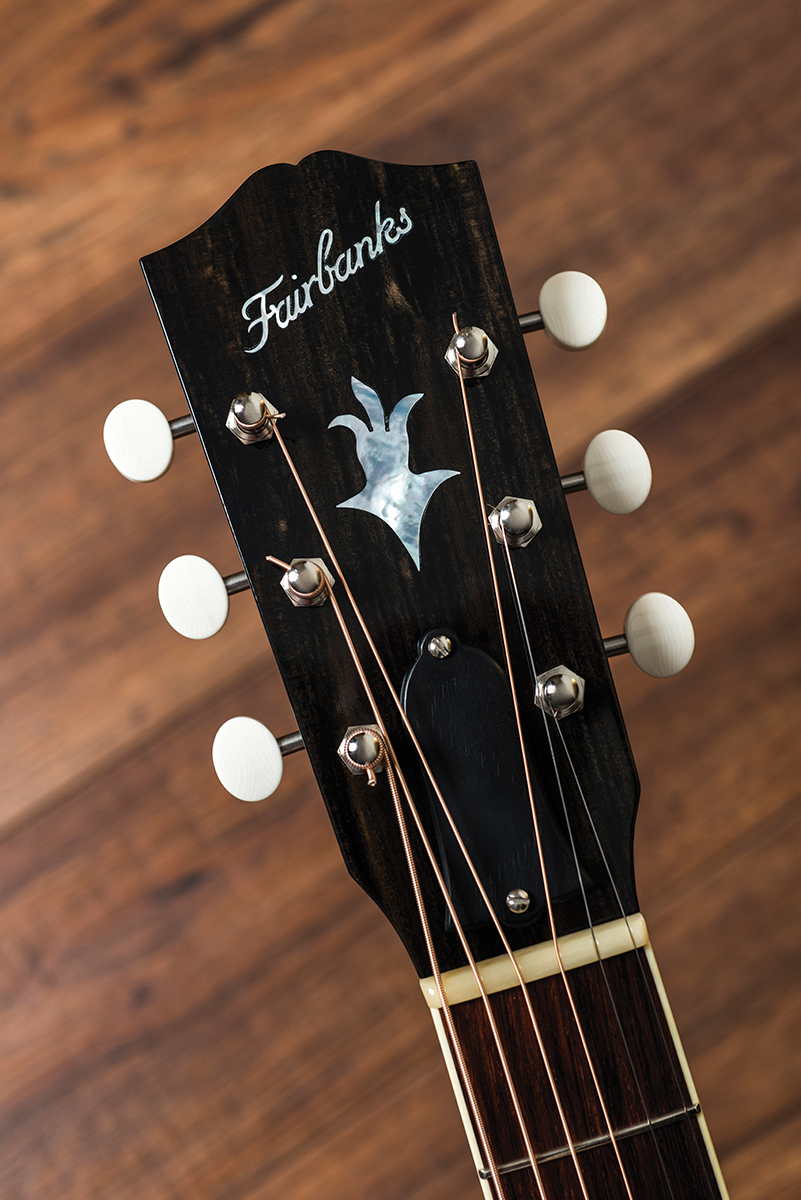 It’s not resolutely old-school, because Fairbanks has incorporated a two-way truss rod into the neck, and its profile is described as ‘modern C’. It’s a pretty subjective term used to describe a neck that has noticeably less depth than 20s or 30s necks, yet retains a full roundness that feels more like something from the 50s. So let’s call it a ‘mid-century modern C’ profile and leave it at that.

Other luxury appointments include the unbleached bone nut and saddle and a set of ivoroid-button Waverly tuners. There’s more ivoroid binding on the body, fingerboard and soundhole, along with mellow gold sparkle purfling that is as attractive as it is unexpected.

Given the obvious influences behind the F20, the unavoidable question must be whether or not it sounds like a pre-war Gibson acoustic. Based on our recent experiences with the real thing, we would say yes and no.

The most noticeable difference is that the F20 doesn’t have the same parched dryness in tone or the hair-trigger response – simply because it’s not over 80 years old. What it does have is a very rich harmonic content to complement the warm sparkle and very long sustain. Similarly, the bass weight belies the body size, and a firm playing touch can generate notes with real thump, snap and power. It’s also remarkably devoid of midrange boxiness for a guitar of its size.

Measuring just 14¾” across the body, you might assume the F20 is a hardcore fingerpicking guitar, but the four-inch deep body contains enough air to power rhythm parts with equal aplomb. It responds really well to a firm attack, and this is another area in which the F20 differs from vintage examples that barely need to be breathed on to generate fine tone. 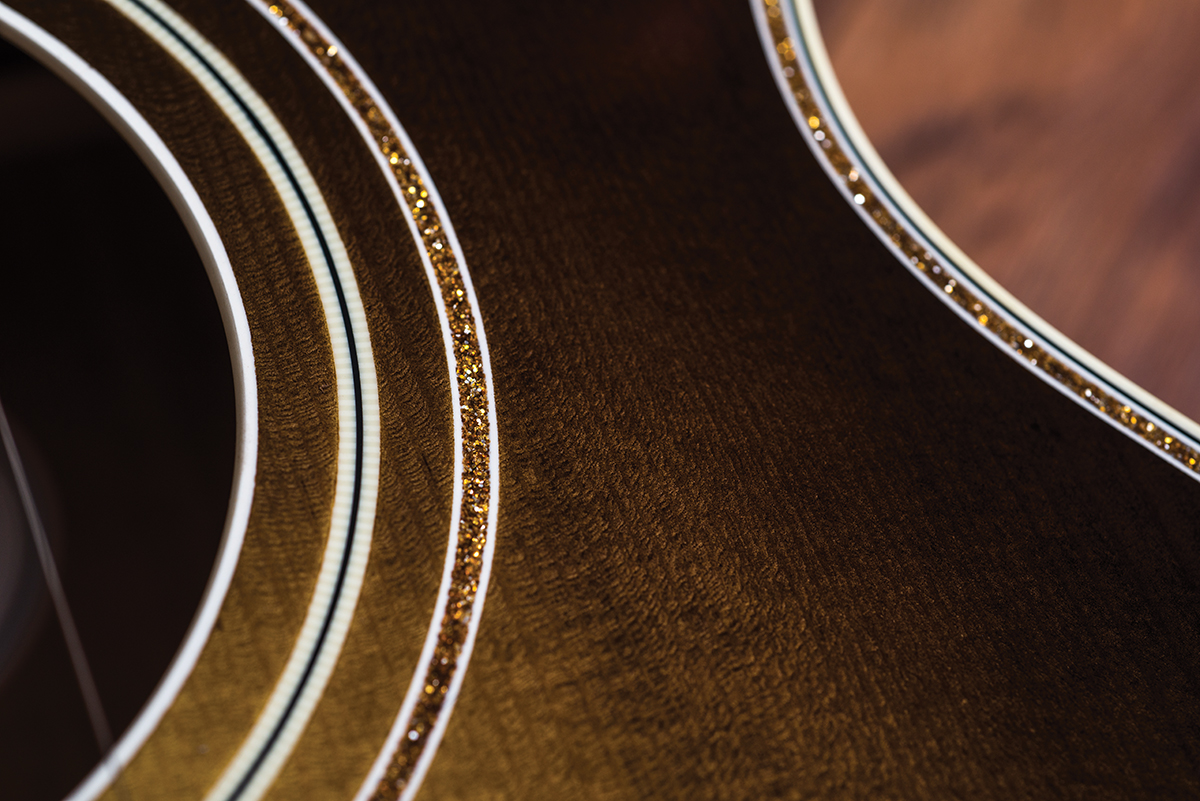 Overall, the sound is majestic and genteel, but some may feel it lacks a certain raw-throated excitement. The F20 is, however, a very easy guitar to play in standard as well as open tunings, and excels with the bottleneck. The bass end remains commendably defined and the plain strings are never overpowered.

This far down the line, we can merely speculate on what a brand new Gibson Nick Lucas must have sounded like during the 1930s, but it’s reasonable to assume the Fairbanks F20 is there or thereabouts. However, if you are hoping for a guitar that will sweep you back in time with a single strum, you may be better off trying to find a vintage example.

To be clear, that is not intended as a criticism of the F20, which will never confine you to the vintage small-box guitar genre. This guitar combines a genuine taste of antique Gibson tone with robust refinement and impressive balance, but an absence of quirkiness. To enhance this vintage flavour, we would be inclined to ditch the coated phosphor bronze strings and experiment with a set of uncoated round cores – or perhaps a set of monels – instead. 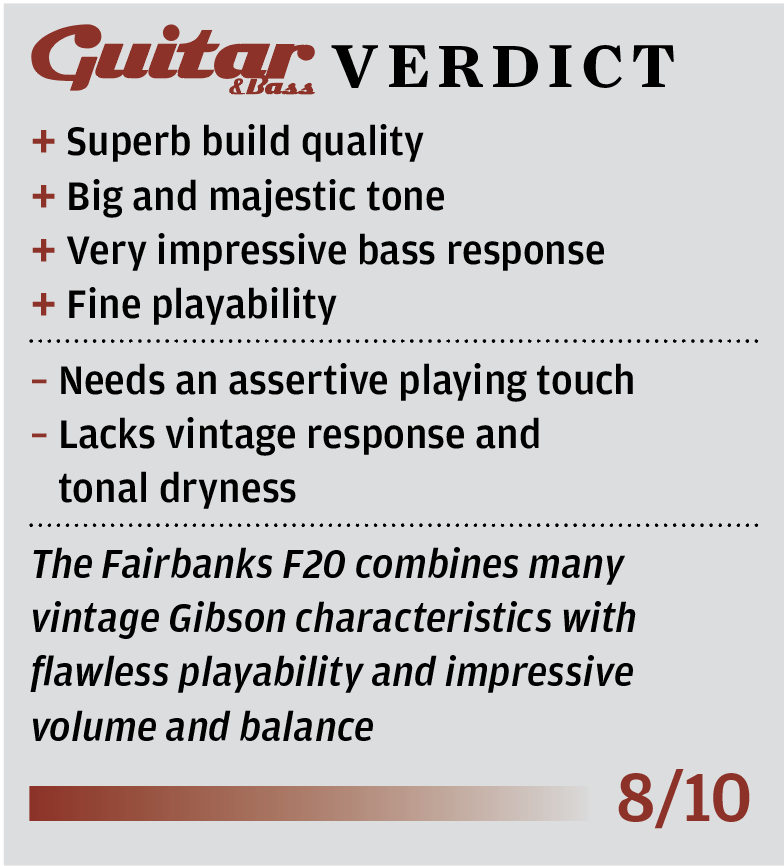