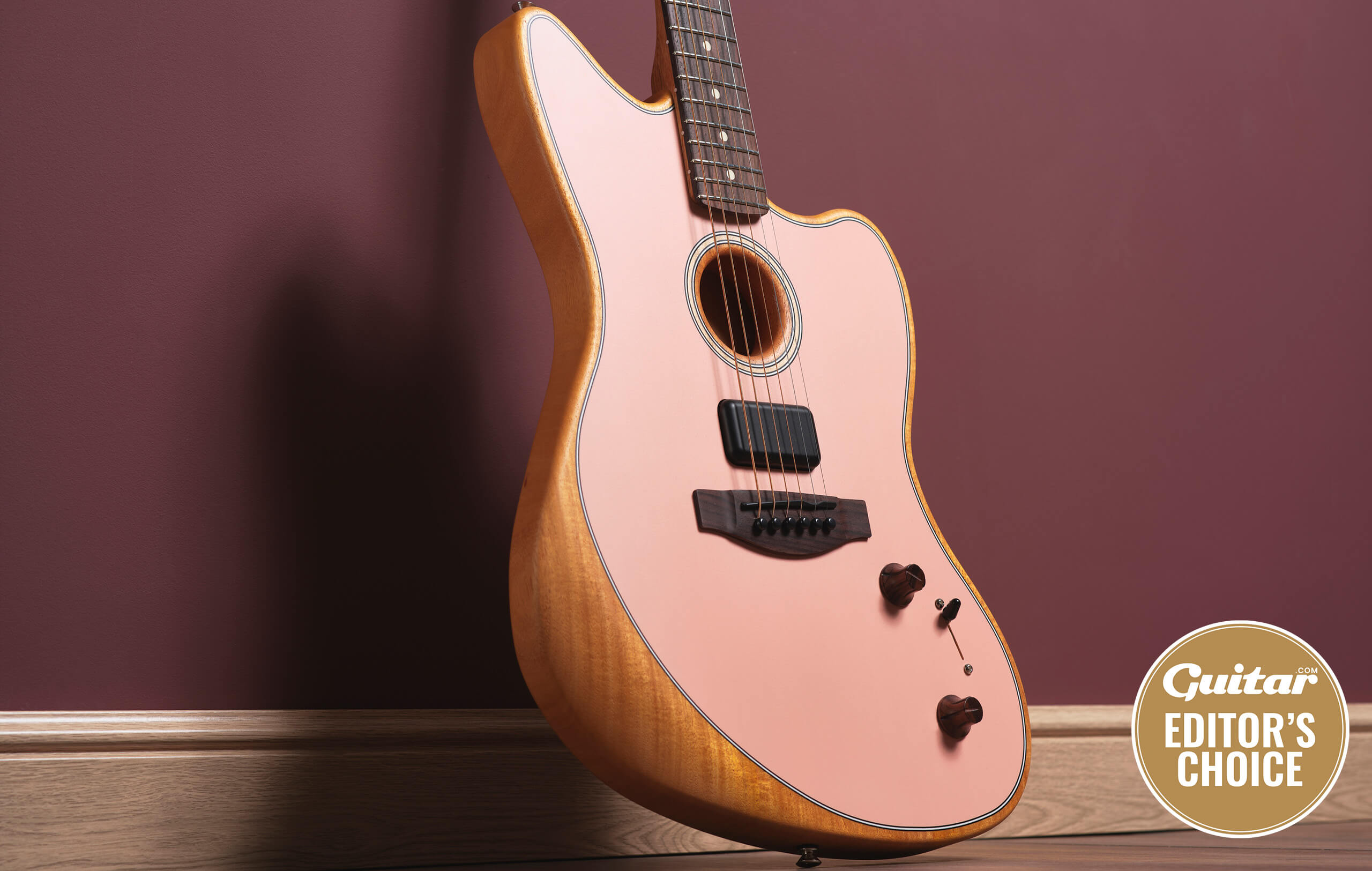 Fender’s electric/acoustic crossover guitar gets a Mexican-made version of its most handsome Jazzmaster configuration, is it time you took the plunge?

The most affordable and versatile iteration of the Acoustasonic yet offers genuinely unique sounds in its most beautiful package.

If you’re of a certain age, you probably remember the days when you’d be wandering around a provincial guitar shop and find – nestled towards the back, unplayed and gathering dust – a strange, vaguely Strat-shaped object with an acoustic guitar’s soundhole and absolutely nothing else to recommend it. Yep, we’re talking about that most ugly of Fender’s 90s ducklings – the Fender Stratacoustic. For those who mercifully missed this chapter in Fender history, the Stratacoustic was an ugly fibreglass-backed hangover from the 1980s that somehow limped on in spite of all available evidence well into the internet era. It was also, undeniably, a significant influence on the modern Acoustasonic range of hybrid instruments – though we’re sure Fender would prefer we didn’t notice.

Perhaps this awkward association is why, despite the clear success and glowing reviews of the Acoustasonic line over the last four years, the reaction to many guitarists when presenting them with Fender’s modern take on an acoust-ified Fender electric is a visceral and inescapable ‘NO’. Perhaps they’re transported back to the sight of its awkward forebear hanging there in the aforementioned guitar shop – unwanted, unloved, unnecessary. Or maybe there’s just something about the Strat and Tele body shapes that some people simply cannot reconcile with an acoustic guitar – either way, it’s clearly a deal-breaker for some. 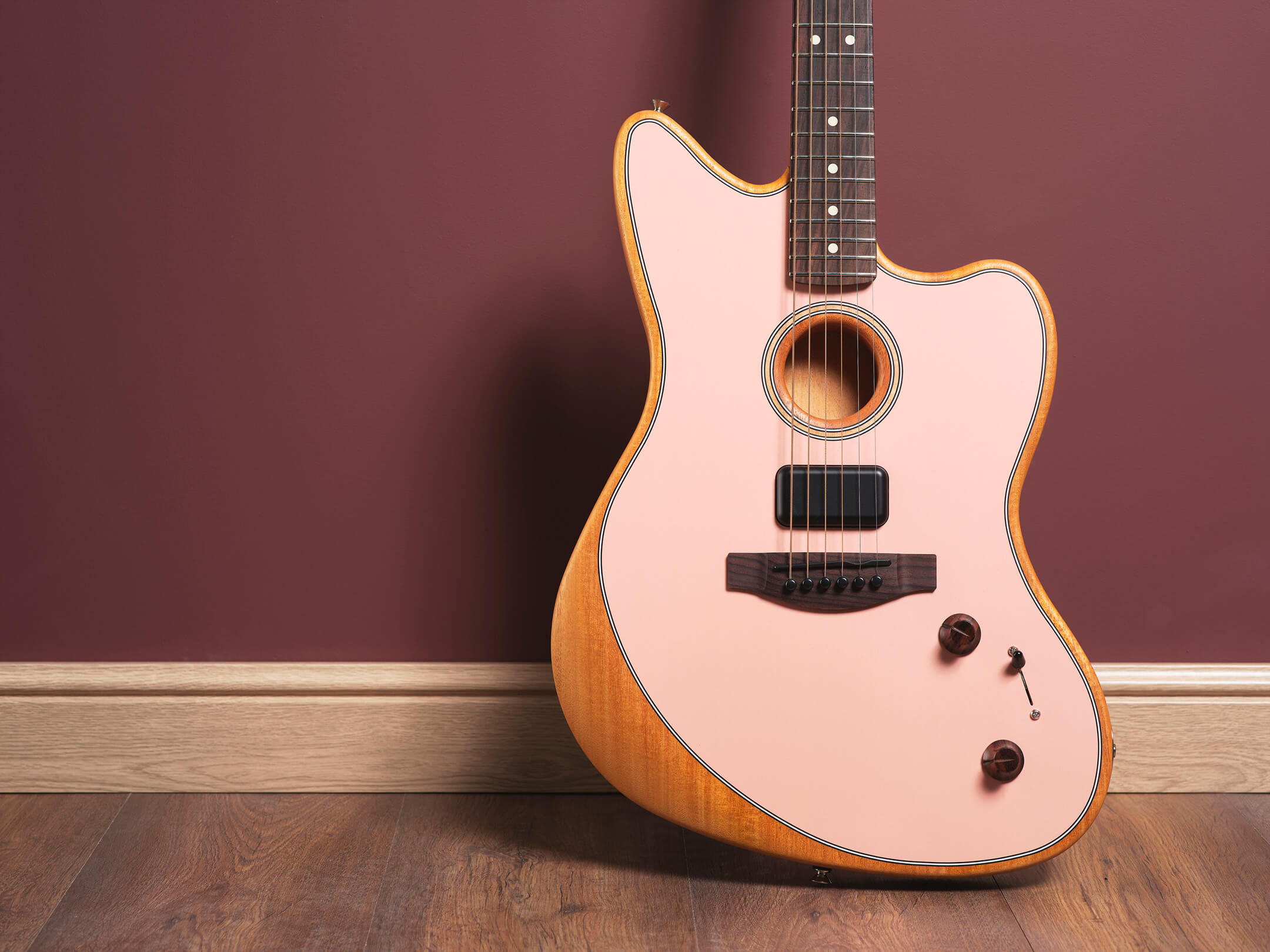 All of which brings us to this, the brand spanking new Acoustasonic Player Jazzmaster, which could be a bit of a game-changer for the Acoustasonic format. This is because from the moment it arrived in 2021, the Jazzmaster has worn its Acoustasonic appointments a little more comfortably than its Strat and Tele forebears, and now it’s more accessible than ever.

Maybe it’s the slightly bigger body dimensions making that SIRS soundhole feel a little less overt, or maybe it’s just that decades of the Jazzmaster being used as a vehicle for wild sonic experimentation makes this radical overhaul feel less iconoclastic. Either way, we think there’s something undeniably beautiful about the design, especially in the matt Shell Pink finish of our review model. It works. 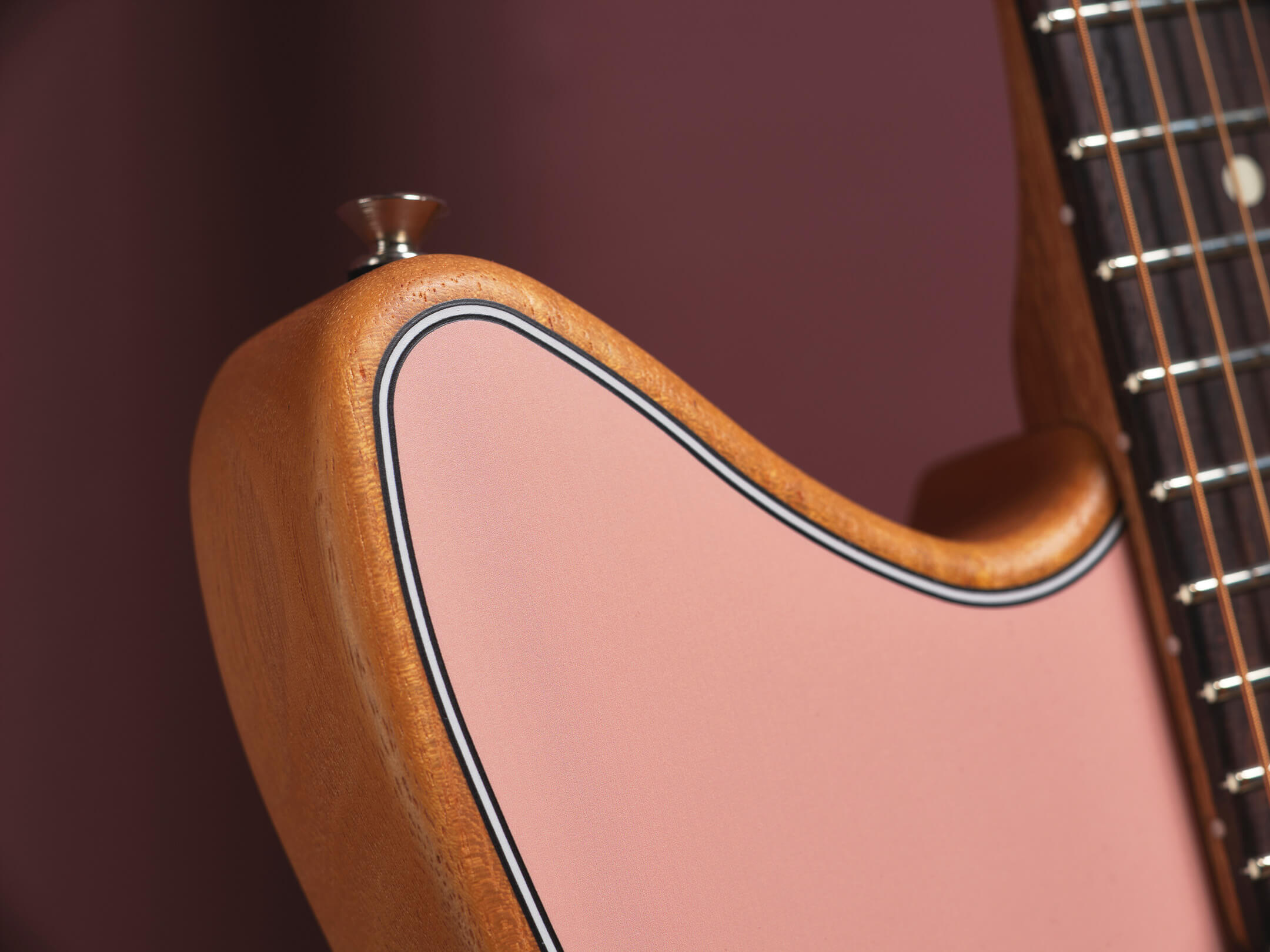 For those who are perhaps a little late to what exactly makes the Acoustasonic so different from its awkward forebears, or at least the relatively new Player Acoustasonic platform, let us catch you up. The Acoustasonic is a genuine hybrid electric-acoustic instrument, with each model combining the dimensions of one of Fender’s classic body shapes (including the body depth) with a fully hollow construction that utilises that classic combination of a mahogany back with a Sitka spruce top. All Acoustasonics also feature a slinky electric-style mahogany neck that’s topped by a rosewood fingerboard, while rosewood is also used for the acoustic-style pinned bridge – the pins, compensated saddle and nut are all Tusq.

The very clever bit however, is the electronics; sounds come courtesy of an under-saddle piezo and a custom-designed Fishman Acoustic Engine preamp, while there’s also an Acoustasonic Shawbucker humbucker below the soundhole for electrified sounds. 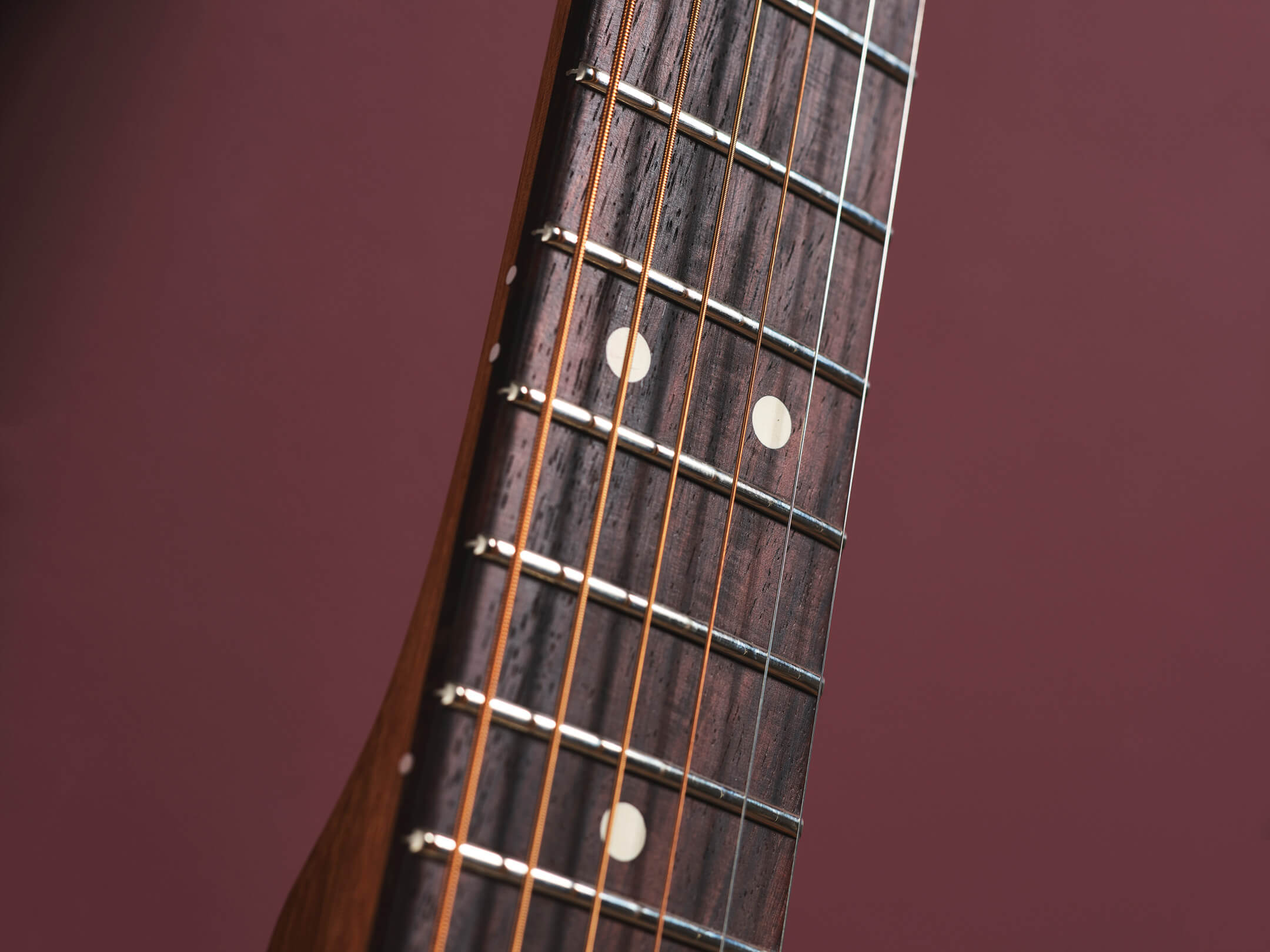 As with the Player Telecaster, the Player Jazzmaster offers a slightly less bountiful buffet of plugged-in sounds than its American counterpart, with the five-way switch of the US version pared down to three here. As with the Player Tele, each position offers two distinct variations on a theme that can be blended (or not) to taste using the blend knob – as with the Player Tele these can be summed up as ‘fully acoustic’ ‘fully electric’ and ‘a bit of both’. The acoustic voices offer the choice between a slot-head rosewood concert-style acoustic and the classic balls-out power of a spruce/mahogany dread – they’re a sensible pairing but we find it a little strange that they don’t just differ from the Player Tele’s acoustic options, but also from the five acoustic voices available on the American Jazzer: odd. 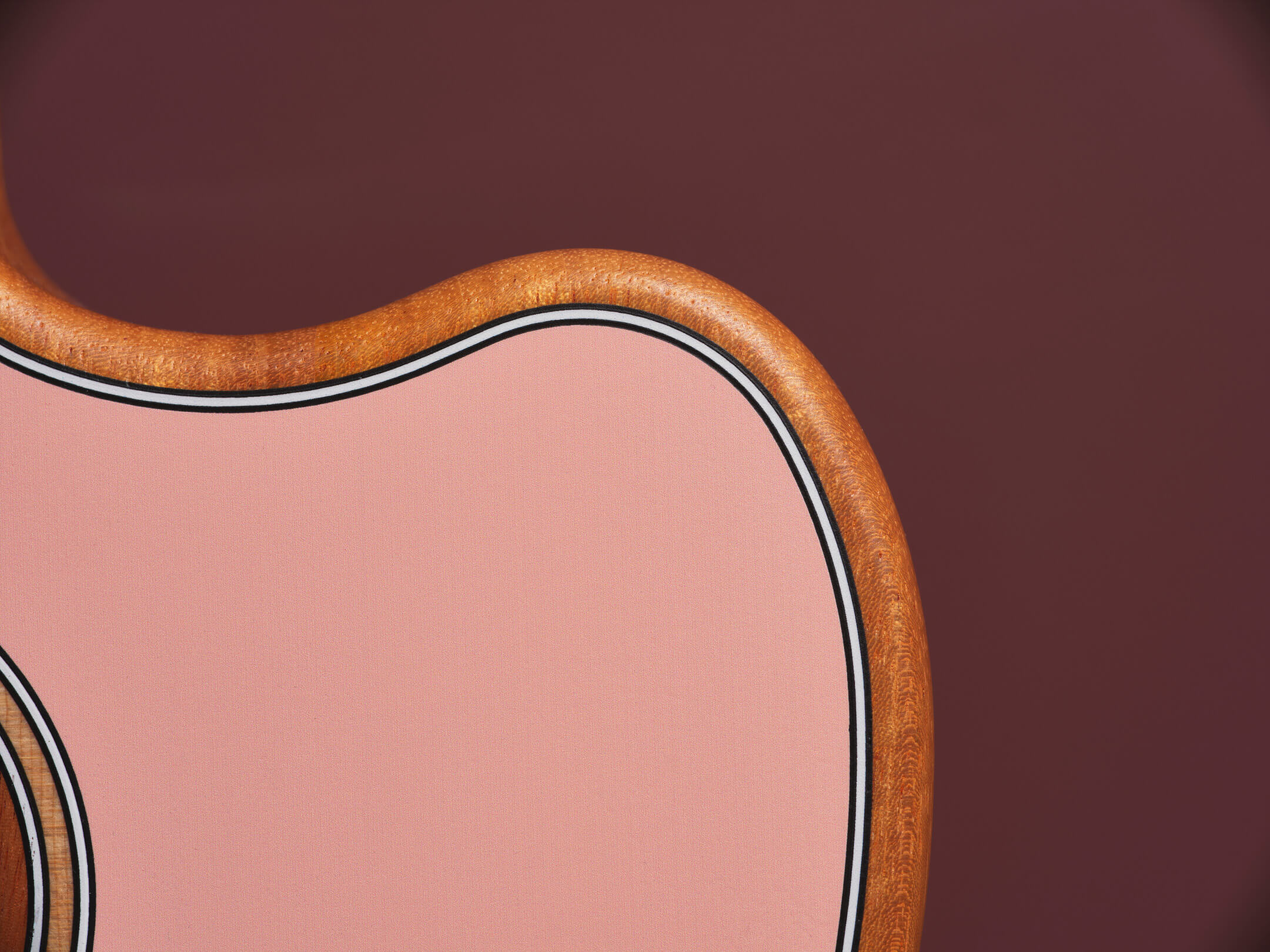 The electric choices are a little more interesting, ditching the ‘semi-clean’ baseline of the American version for a punchy but still clean tone on one side, and a raucous overdriven tone on the other. The middle position ditches the slightly odd pure piezo option of the US Jazzer and instead opts for the lo-fi piezo sound that aims to emulate a double-tracked acoustic on one side, and the same but with a bit of genuine dirt at the other.

It all adds up to what feels like a very considered evolution of the American Acoustasonic Jazzmaster formula, with some of the more esoteric stuff ditched in favour of something a little more overtly rock… let’s find out if that’s the case. 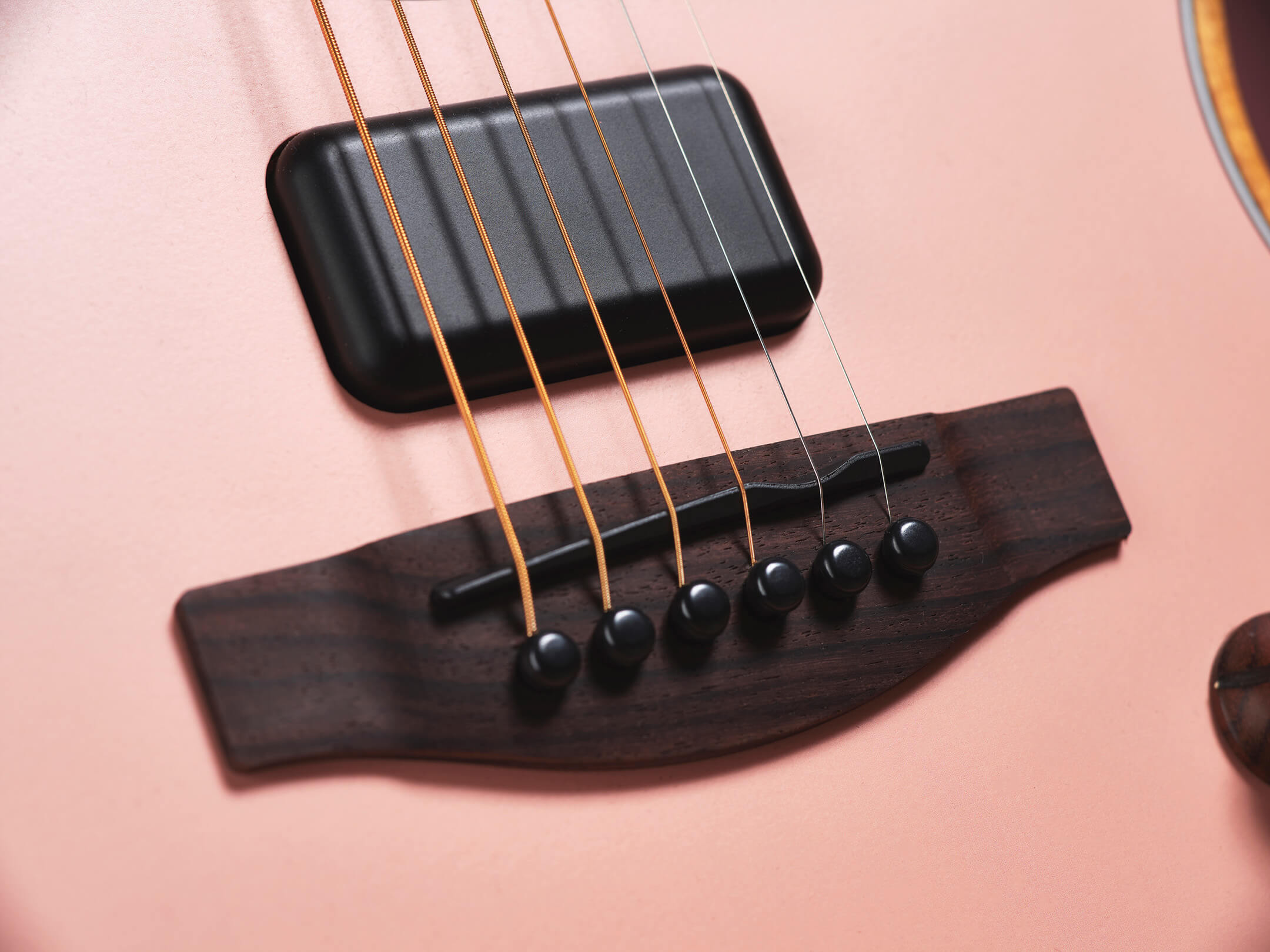 We can’t help but feel that a lot of the Acoustasonic naysayers would be converted by the simple act of picking one up and having a go. There’s something a little off-putting about cradling its boxy take on a Jazzmaster body and gripping the unfinished mahogany neck at first, but it’s amazing how quickly it just feels comfortable, especially if you’re primarily an electric guitar player. That is of course helped by the electric-like ‘Modern Deep C’ neck profile, and the rounder-than-standard 12” fingerboard radius.

Strung with 0.011-52s it’s very easy to forget you’re playing an acoustic instrument at times, such is the ease with which you can move up and down the neck, though some fingerstylists might find the electric-like string spacing a bit claustrophobic. There are quite literally limits to how much projection you can get out of a body this thin, and if you’re looking for a campfire strummer or standalone busker, we probably shouldn’t have to tell you that this isn’t the guitar for you. That said, the proprietary SIRS soundhole does give more projection than a body this size has any right to, and subtle though it might be, we do think the slightly increased dimensions of the Jazzmaster body does at a touch more resonance and depth unplugged. Of course, if you have a young family, or indeed very thin walls, an acoustic guitar that can be strummed at polite volumes might be exactly what the doctor ordered – Yamaha has sold plenty of Silent Guitars for that very reason. 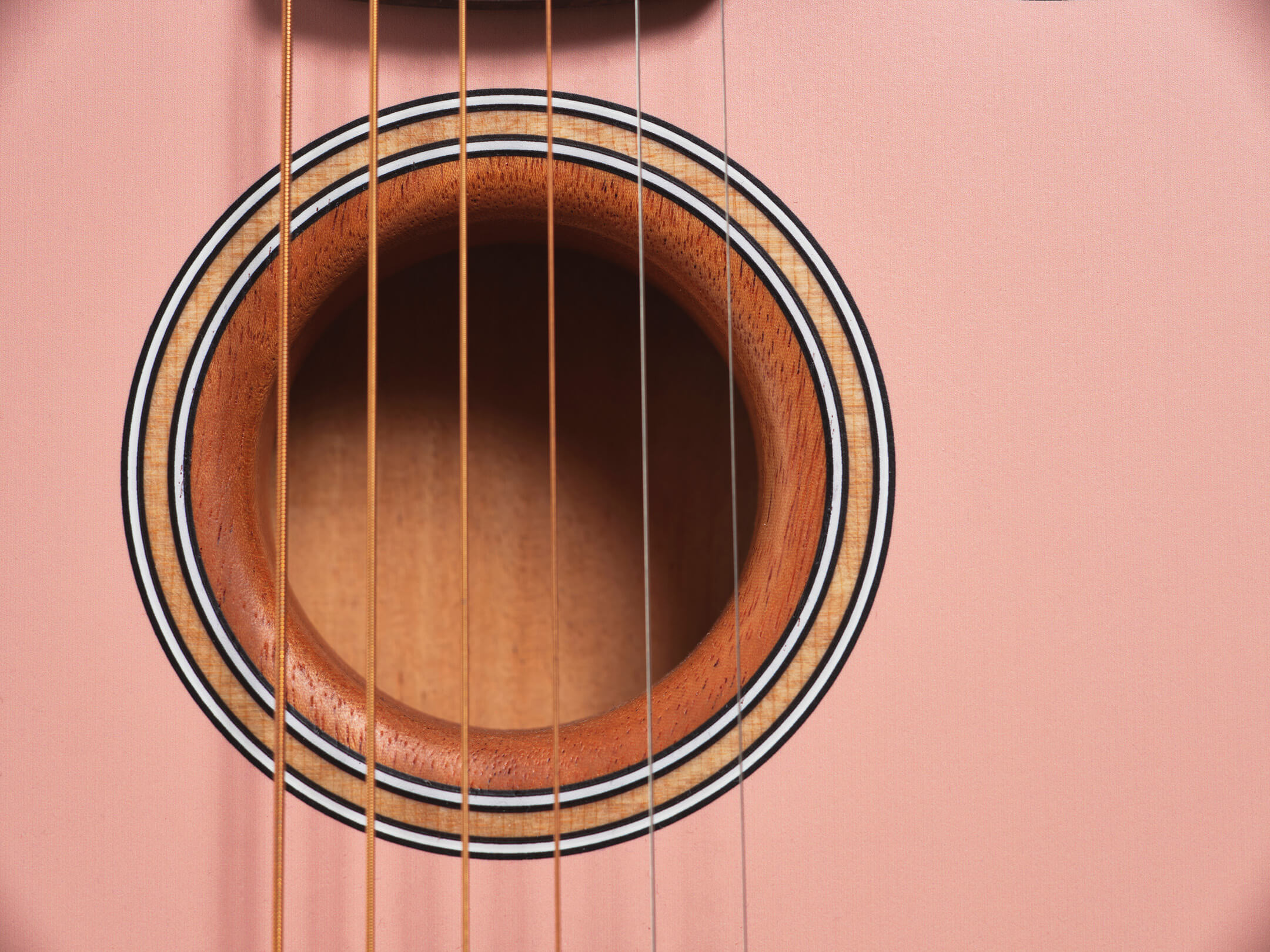 But the Acoustasonic Jazzmaster is an instrument designed to be electrified – the magic stuff really happens when you plug in. Played through the flat acoustic preset of our Positive Grid Spark, the two dedicated acoustic modes sound rich and warm – there’s no hint of ugly piezo quackiness and it’s actually a little disconcerting to hear the booming voice of a dreadnought emerge from a guitar with such a polite natural voice.

The humbucker options are nowhere near as polite – running into our early 70s Marshall combo, even the so-called ‘clean’ voice is high output enough to add a ragged edge to our tones, while turning it all the way to the ‘high-gain’ side does exactly what it says on the tin, giving a mean and meaty distorted tone even at low volumes. It’s worth noting that even through an electric guitar amp the acoustic voices sound authentic and warm – not always a given with a regular acoustic. 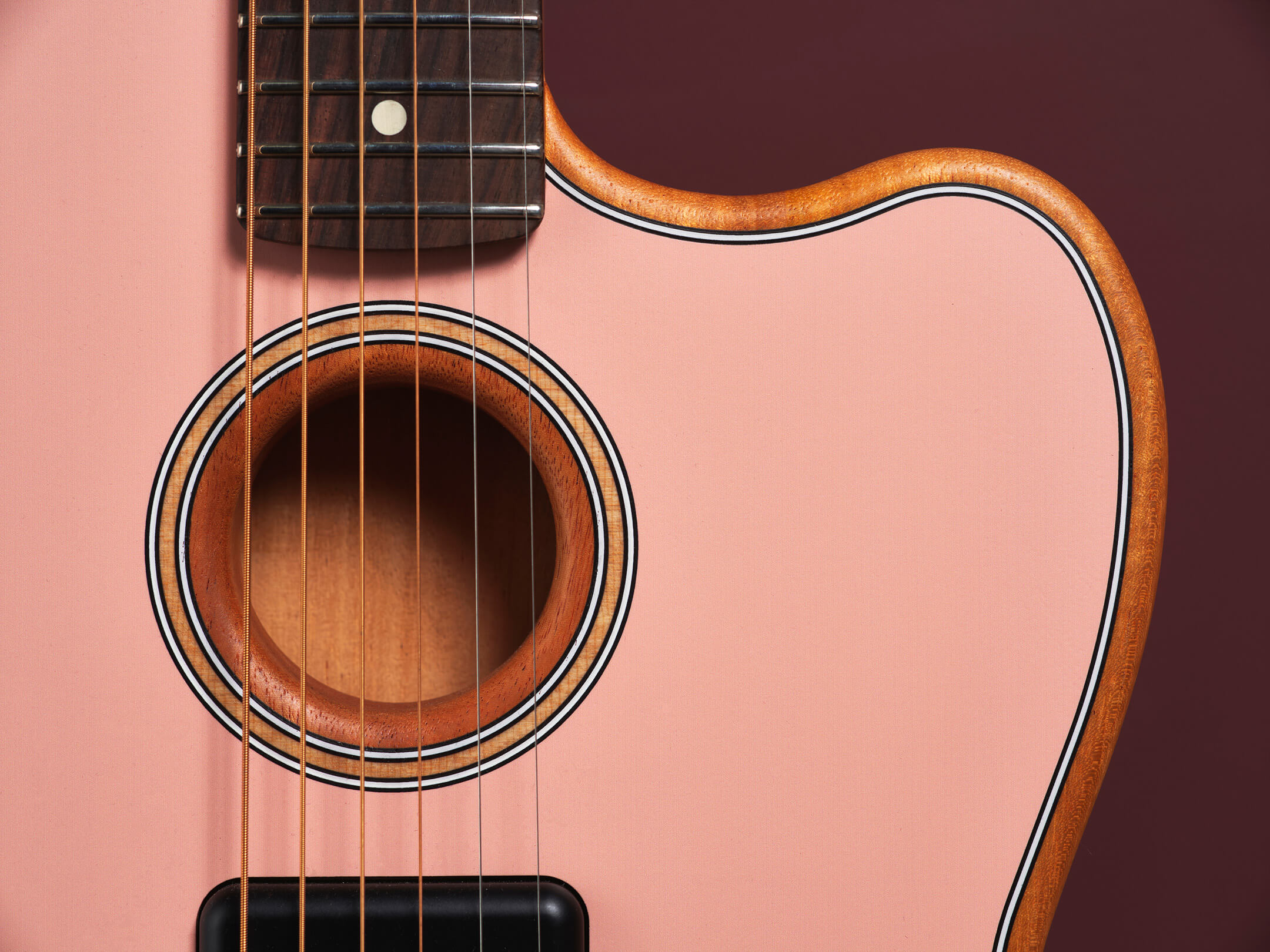 The temptation to give that dirty Shawbucker something meaty to get stuck into is strong, and despite its acoustic origins, the guitar handles even searing silicon fuzz with aplomb – the resonance of the body and those phosphor bronze acoustic strings adding a touch of zing and air to proceedings that we don’t normally expect. It’s a real fun time.

The most fun, however, can be had in the middle position, and the two pure piezo modes. Now, accepted wisdom states that the last thing most modern acoustic players want is the pure unadulterated sound of a piezo pickup, but there’s more to it than meets the eye. This third position controls a blend between the piezo and the humbucker with a sprinkling of dirt on it, and so depending on where you position that blend knob you can either add some electric grunt to your acoustic tone, or add a record-style double-tracked feel to your electric parts – it’s very effective and bags of fun to be able to lean on in a live setting. 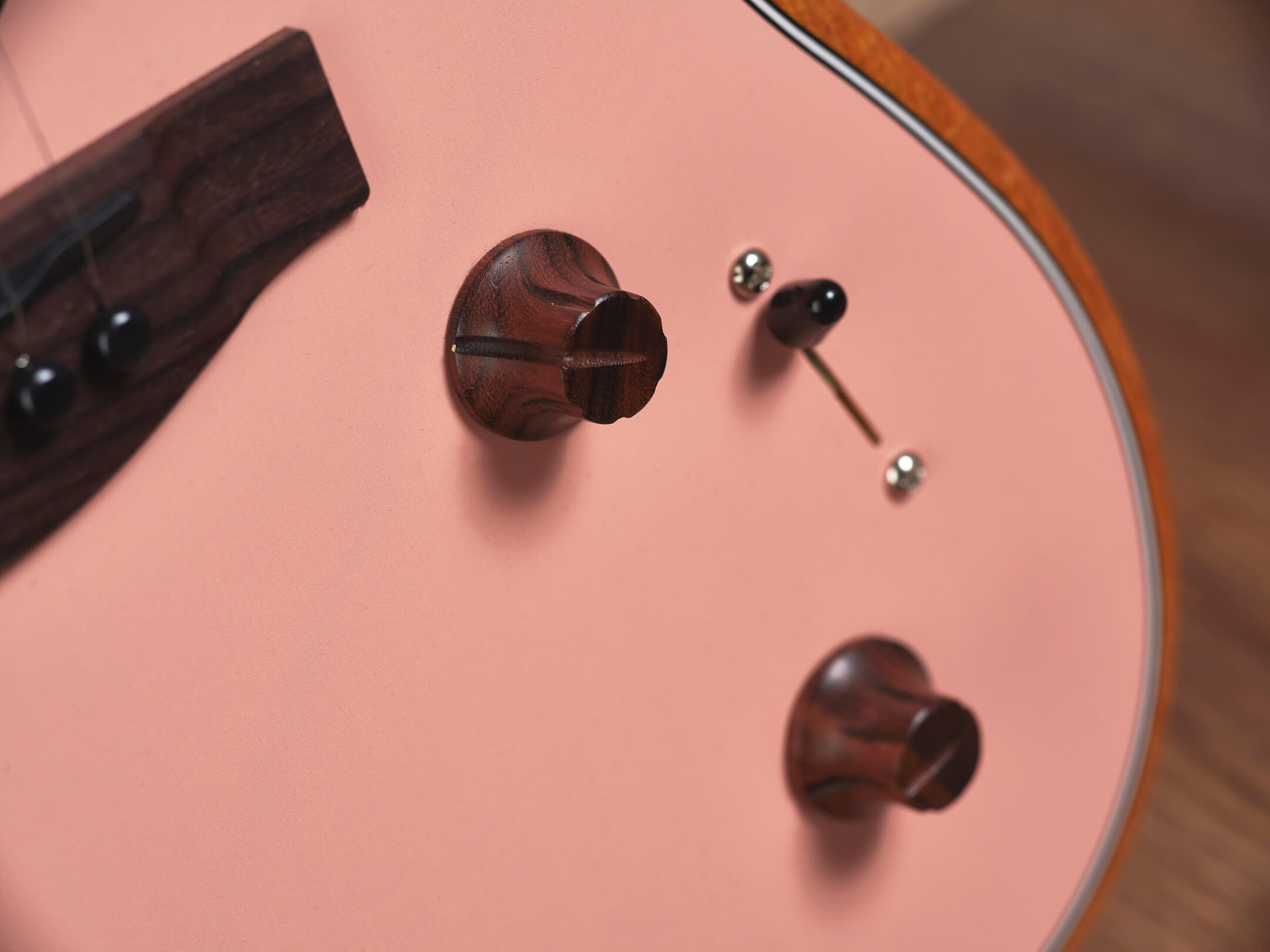 And fundamentally that’s the environment in which most of us will likely find the sweet spot for the Acoustasonic: as a genuinely versatile instrument that allows you to switch between acoustic and electric at the flick of switch, while offering new sounds that you genuinely can’t get another way. And that’s why the naysayers should look again at the Acoustasonic Player Jazzmaster – it’s one of the most unique and interesting instruments modern Fender has ever made, in a form and at a price that makes it more accessible than ever. A Stratacoustic this ain’t.