With updated innards and subtle cosmetic enhancements, this electro-acoustic from Martin’s mid-priced Road Series range aims to be the ultimate touring companion. 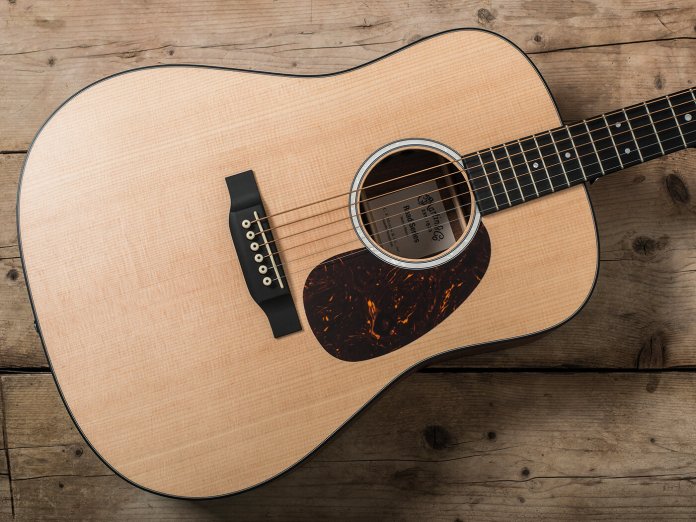 Like the Mos Eisley Cantina, the mid-priced acoustic market is crowded, cut-throat and full of imposing characters. Martin’s Mexico-made Road Series is one of the more venerable names in the field, having first appeared all the way back in 2001, offering a stripped-down entry point for gigging guitarists.

In the 18 years since, Martin has periodically overhauled its Road Series instruments and the most recent fruits of Nazareth’s labour can be found in this all-solid Sitka and sapele 14-fret dreadnought, the D-10E.

Aesthetically speaking, budget Martins have not always been the most dazzling, but while the D-10E’s all-satin finish is a little spartan, the grain of the solid Sitka spruce top is rather nice, and the new pearl soundhole inlay and fret dots give it a cosmetic edge over its predecessor, the DRS2.

The D-10E actually shares plenty with the DRS2, including the use of Richlite for the bridge and fretboard, a ‘Select Hardwood’ (which we believe is Martin speak for Spanish cedar) neck, and a HPL headstock veneer. Under the hood, however, there are some changes.

The old Road Series guitars made use of Fishman’s Sonitone pickup system, but the MX-T system loaded into the D-10E is notable not just for its sonic performance, but by the inclusion of a built-in soundhole tuner – ideal for mid-gig adjustments.

The Martin dreadnought sound is as iconic as it is familiar and the D-10E ticks all of the classic boxes. Although the tone was a touch on the bland side initially, the more we play it, the more warmth and character reveals itself – and it’s going to keep getting better as you play some of the stiffness out of it.

And play it you’ll want to – Martin’s hand-rubbed Performing Artist neck is an effortless ride, and as you’d expect from a dreadnought, this is a guitar that loves to be hit hard. Especially with a pick, strummed chords leap out of the guitar with power and projection, without ever feeling too boomy or unbalanced.

Although it’s not as sensitive as a dedicated unit, the onboard tuner proves its worth when it comes to altered tunings, with a bright, clear display that can be easily seen in any light. Less impressive are the tuning machines themselves – they’re not as responsive as we’d like, and their mass causes a fair bit of neck dive when the D-10E is strapped on.

The MX-T system offers volume and tone thumbwheels, delivering a perfectly respectable and usable replication of the guitar’s tone, with very little of the plasticky quackiness that can plague cheaper systems.

This might not be the cheapest all-solid electro on the market, but it sounds, looks, feels and indeed is every inch a Martin – all for less than half the price of a D-18. With a robust gigbag also included in the package, the D-10E is the perfect performance foil for those who want their acoustics with real pedigree.