Atkin Guitars’ Slope Shoulder series of Gibson-inspired acoustics includes this achingly authentic yet updated take on the LG-2. Does it sound as good as it looks? 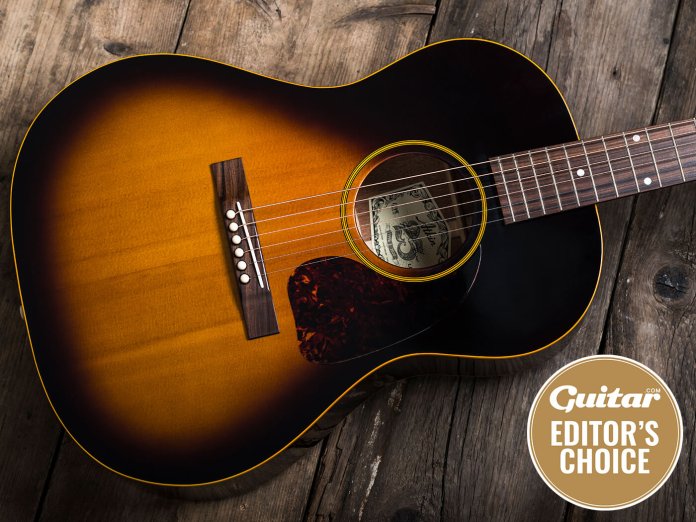 The LG models were Gibson’s entry-level acoustics when they were introduced in 1942. As was typical of Gibson’s student models, they may have been less adorned but that didn’t mean they were lesser instruments than the pricier J-45, J-200 and so forth.

It doesn’t seem that long since LGs were a relatively cheap and very cheerful entry point into the world of vintage Gibson acoustics. Sadly, that’s no longer the case. Thankfully, there’s an affordable alternative made in the English city of Canterbury rather than Kalamazoo, Michigan.

We tested Atkin’s The Forty Three back in 2017 and awarded it a rare perfect 10. That guitar was based on a banner headstock J-45 and this little beauty is modelled after an LG-2 from the same era. For the most part, the specifications are identical to a vintage Gibson model, with an X-braced Sitka spruce top, mahogany back and sides, and a mahogany neck set into the body at the 14th fret. 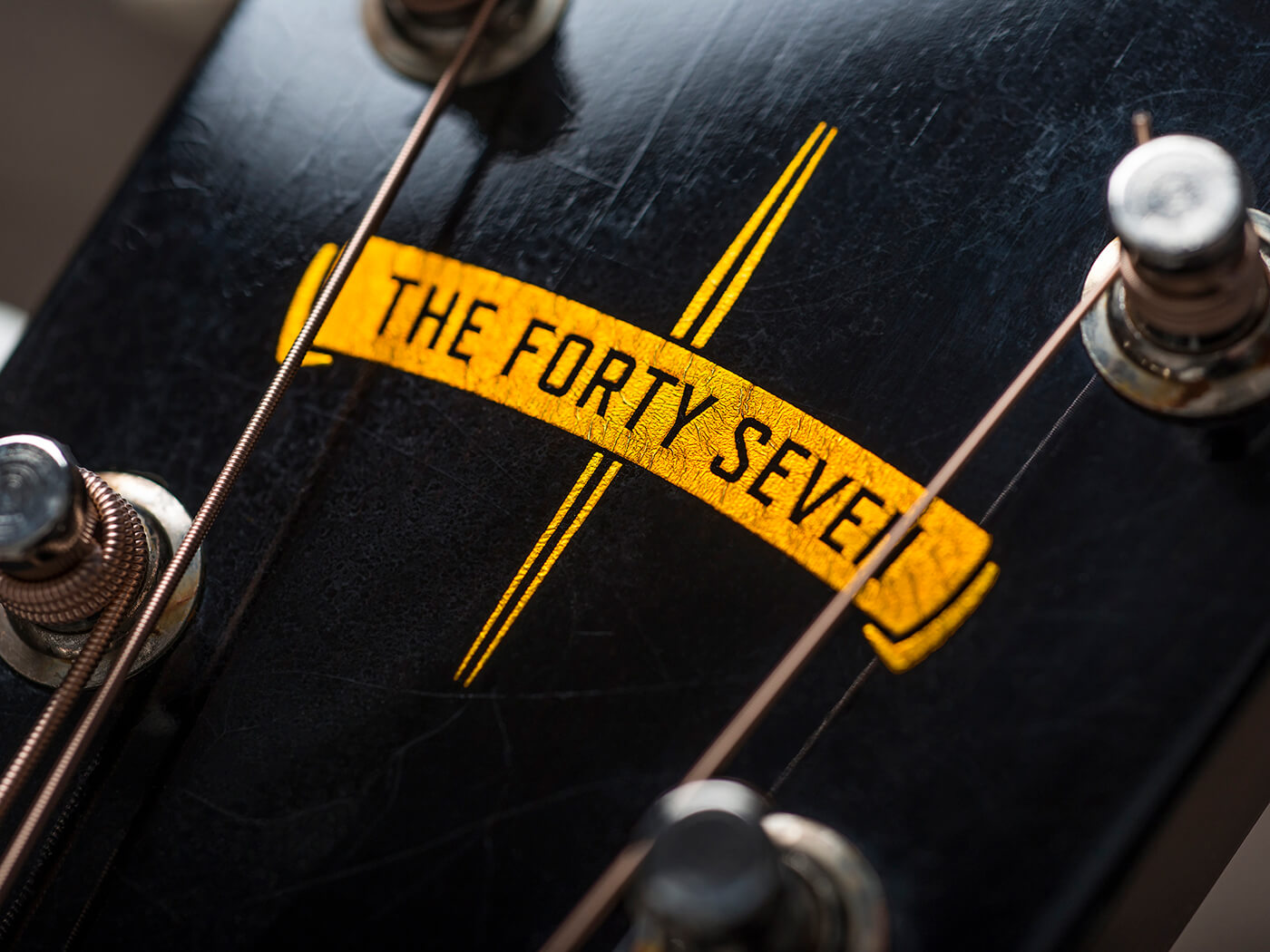 Points of difference include white plastic bridge pins rather than black, the headstock shape, a lack of pearl dots on the bridge, and a lower bout that’s been widened to 14.5 inches. Gibson originals vary between 14.125 and 14.25 inches but we actually prefer the Atkin outline.

Here the 19 frets and pearl dot inlays are set into a bound Santos rosewood (aka pau ferro) fretboard with a rectangular bridge to match. The guitar combines vintage-correct three-on-a-plate Kluson-style tuners with single-ply celluloid body binding, a bone nut, and a compensated bone saddle. 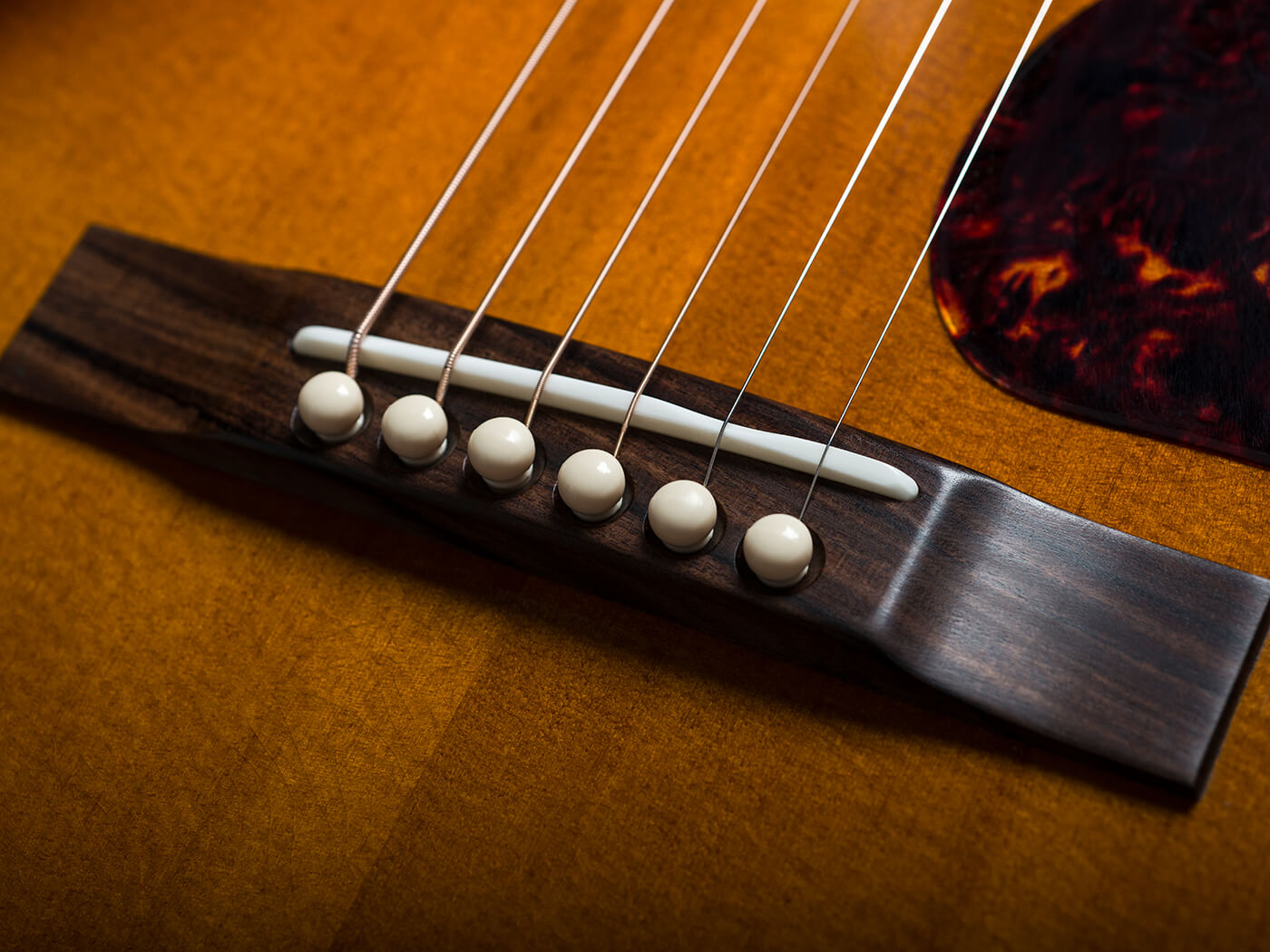 Atkin has gone all out on the finish. The tobacco sunburst looks absolutely vintage-authentic. The amber centre has a nutty darkness, with no hint of yellow, and the fade into the dark brown is almost imperceptibly smooth. If this reviewer’s 1956 ES-225 is anything to go by, Atkin’s transition is arguably more refined than Gibson’s once was.

The artificial ageing is interesting. No attempt has been made to dent or chip the finish, and the fingerboard and bridge have been buffed out to a reflective sheen. The appearance of age has instead been created by allowing the lacquer to sink into the mahogany, and avoiding excessive gloss.

Additionally, there’s fine lacquer checking all over the finish. Although it’s a little too crazed and extensive to pass as the real deal before an experienced eye, it’s attractive if you appreciate this sort of thing. The ageing attempts are more than skin-deep, however, extending beneath the surface to the baked soundboard and baked pre-war style scalloped braces. 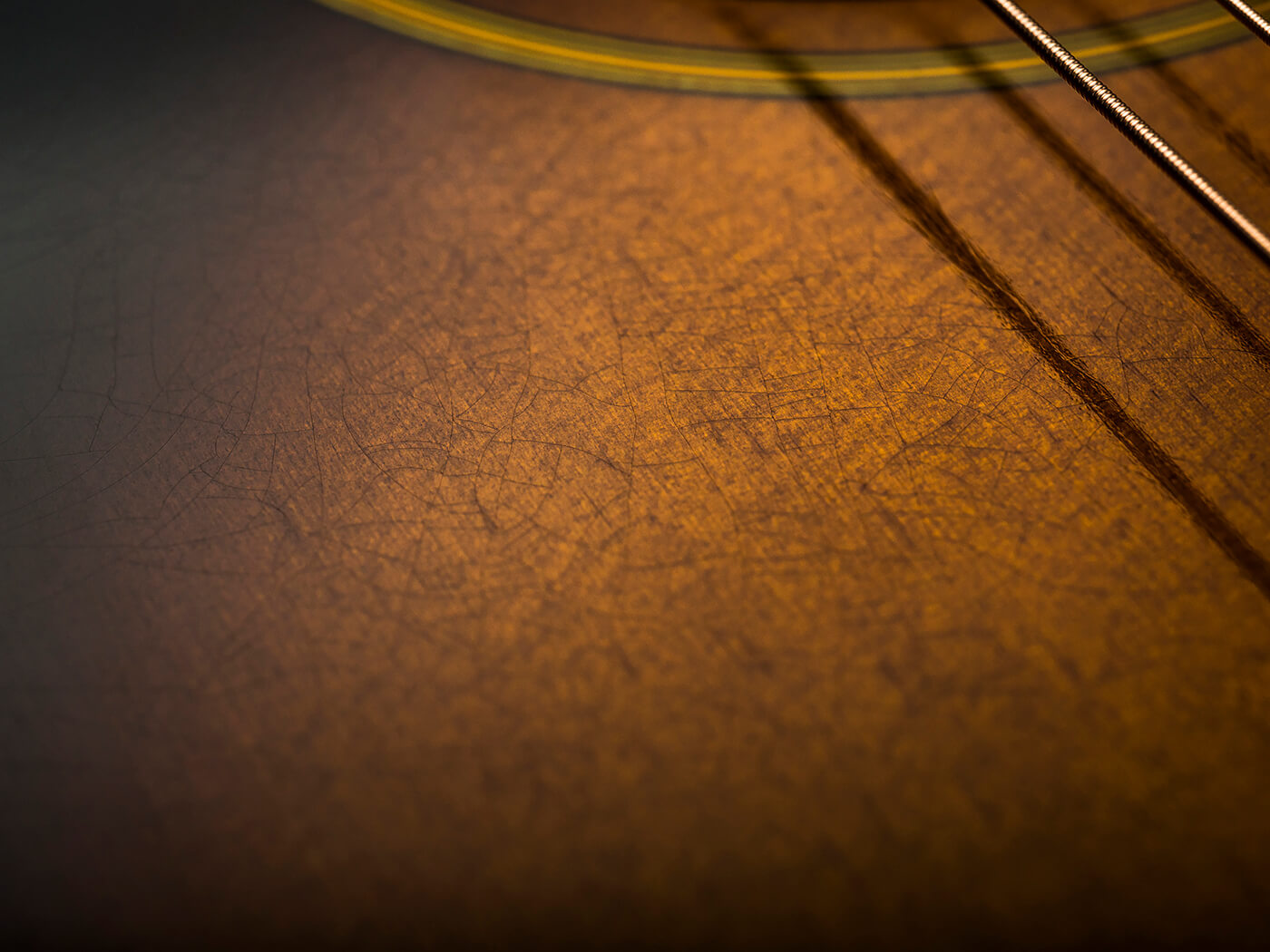 The Forty Seven is intoxicating on many levels, not least its smell. This reviewer could’ve spent much of the day with his nose inside the soundhole, giddy with the heady aromas of lacquer, glue and tonewood [have you been spraying guitars with the windows closed again, Huw? – Ed]. It’s certainly an area in which acoustics always win out over electrics.

In terms of aesthetics, the Atkin is clearly not a Gibson or indeed a vintage guitar but, much like spellbinding historic instruments, something about it just draws us in and compels us to pick it up and play.

Despite the more modern neck profile, it even feels old. Part of this comes down to its size and light-yet-solid feel. While Atkin’s standard C-profile neck is designed to be less of a handful than some of the huge necks of the pre-war and banner headstock eras, it’s by no means skinny and is on the fuller side of what we’d consider to be medium depth. 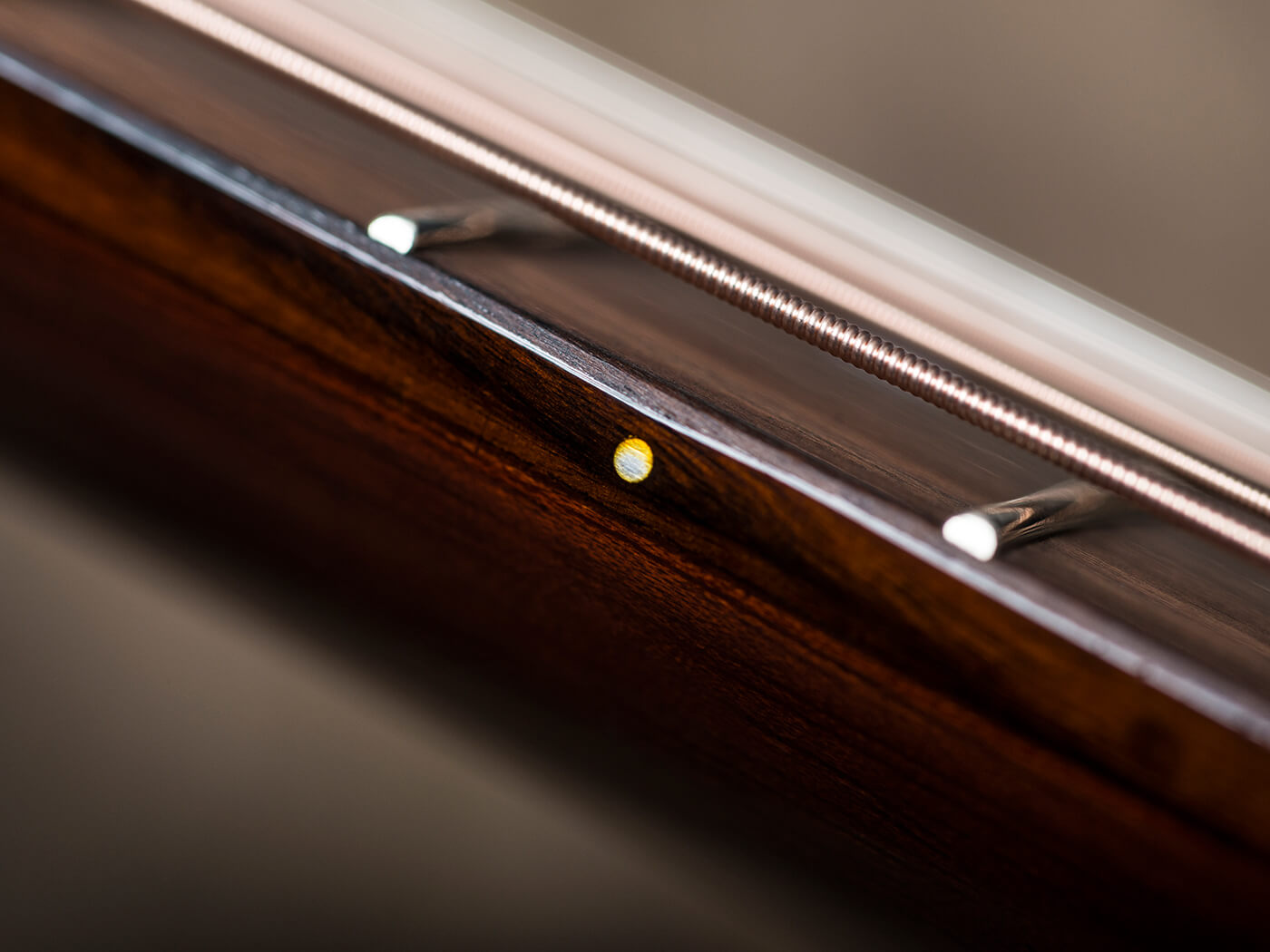 The tone combines classic and modern elements. On the vintage side, there’s warm and effusive woodiness, a rounded bass thump and the lingering ghostly harmonics that we listen for inside the body of old Gibson acoustics. On the contemporary side, we get extremely even string-to-string balance, volume aplenty and a tonal consistency across the fretboard that isn’t a given with vintage guitars. There’s also real solidity and substance to single notes on the plain strings, and the bass has more punch, depth and power than we would expect from a vintage LG-2.

It’s this bass extension that makes The Forty Seven possibly the best all-rounder for a guitar of its size that we’ve encountered. Small-bodied Gibson-style acoustics are generally associated with fingerstyle, whether that’s country or old-school blues picking. While Atkin’s LG47 lends itself readily to those styles in standard and dropped tunings, the total absence of boxy midrange resonance allows it to venture into J-45 territory as a highly effective strumming guitar. There’s also a quickness and willingness to respond that is less apparent with those vintage Gibsons that are more stiffly braced. 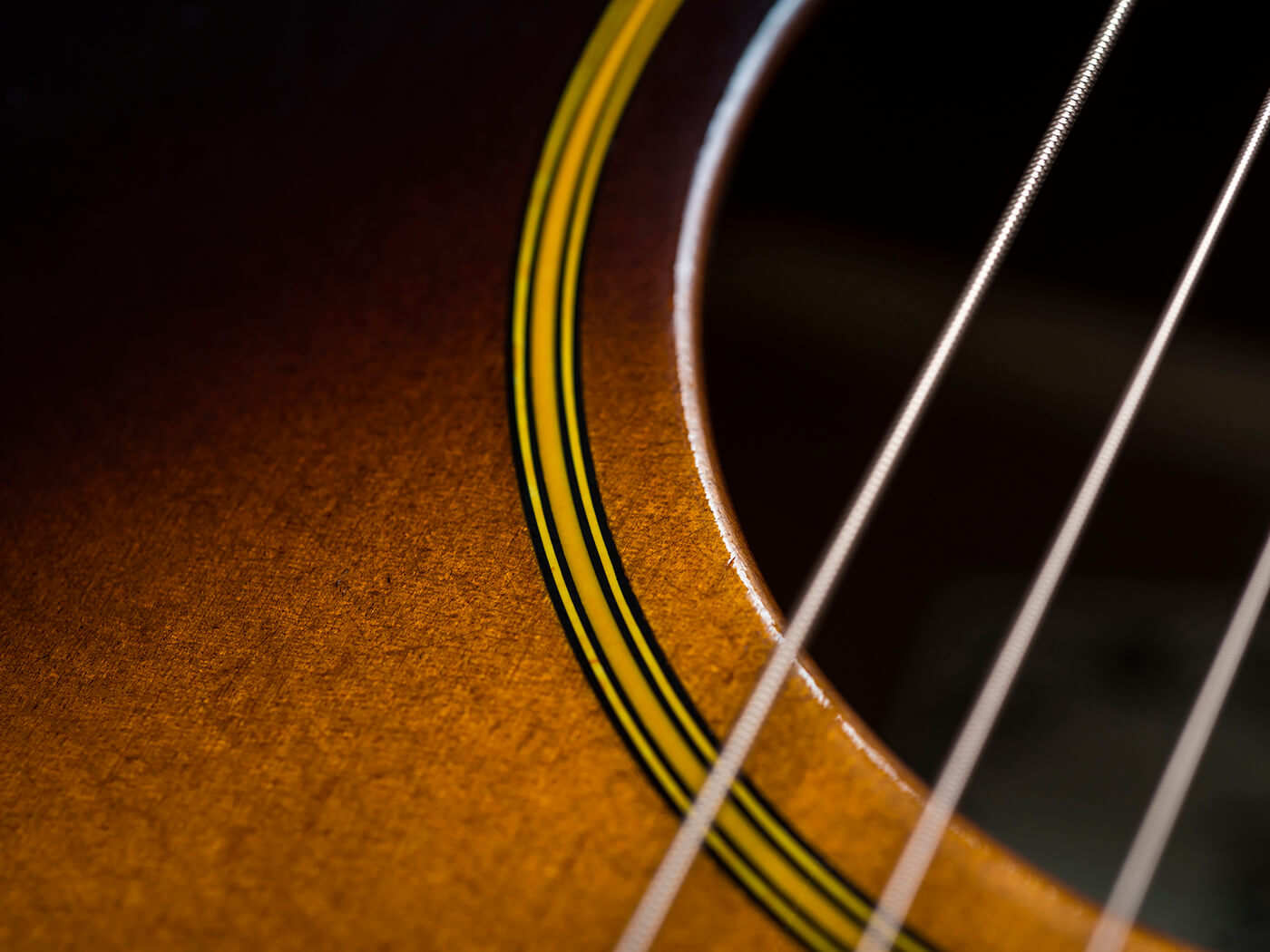 The review guitar is strung with Elixir phosphor bronze strings and, as much as we enjoy Elixirs for their tone and longevity, we can’t help wondering if The Forty Seven might sound even more vintage with a Monel set such as Martin’s Retros. Finding the best strings for an acoustic guitar is akin to changing pickups on electrics, only the process is much quicker and easily reversed. The results can be surprising because many guitarists get divorced more often than they change their string brand.

There’s some degree of cognitive dissonance involved here. Though the relic’ing is tastefully done, The Forty Seven is clearly a new instrument. Yet Atkin Guitars has achieved something that few builders and manufacturers are able to: it actually makes you feel like you’re playing an old guitar.

Having said that, it’s still easy to play – the tuning is rock solid, the machineheads work faultlessly, and the intonation is exemplary. It also feels like it’s been hand-crafted rather than pulled straight from a production line. In a direct shootout, The Forty Seven might not sound exactly like a 1940s LG-2 but we suspect Atkin’s version may be more versatile as a result.

Atkin Guitars The Forty Seven
1 of 5