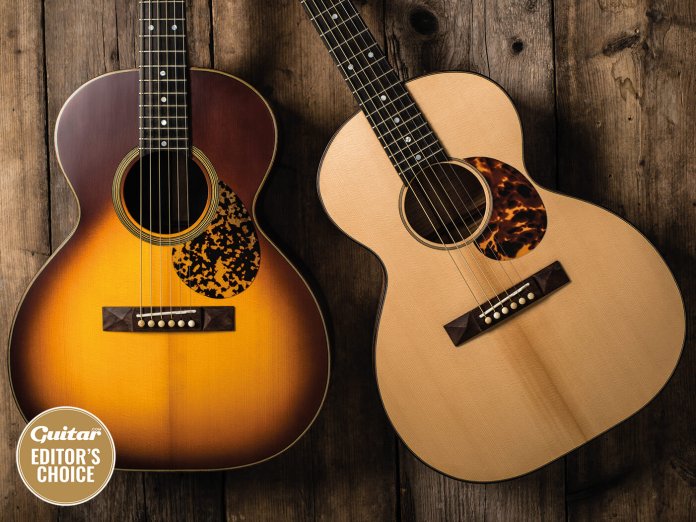 Occasionally, we’re obliged to begin reviews with a full disclosure. Regular readers will be familiar with the name of Cardiff-based luthier Dave Dearnaley – he has provided us with help and advice on countless occasions, his Taff Delta T-style electric is the only review guitar this writer has ever bought and he has been a friend for many years.

In addition to being a long-time member of goth-rockers Alien Sex Fiend, Dave is a highly regarded electric-guitar builder with an uncanny ability to capture the tone and vibe of vintage designs. Even so, his most famous guitar is the black V-style model that Phil Campbell played when Motörhead appeared on UK TV comedy The Young Ones. It was subsequently purchased by Dave Grohl and you can see it in the Foo Fighters’ Rope video.

Over the last five years, Dave has phased out the electrics, instead devoting his energies to building acoustic guitars of his own design. Dave would probably feel comfortable with the description ‘old school’, but his acoustics combine traditional looks with contemporary construction ideas.

His approach to being an acoustic maker is characteristically idiosyncratic. There are no model designations and he will not be accepting commissions. Instead, he plans to always have several guitars available for potential customers to try out. In the worst-case scenario, Dave cheerfully admits, “I’ll just end up with a house full of really nice acoustics.”

You can read Dave’s own description of his body design and cylinder construction method in our accompanying interview, but we’d describe the shape as a scaled-up and deepened parlour guitar. The lower bout measures 15 inches across, which puts it in the Auditorium bracket with 000/OM Martins.

Dave’s X-brace pattern is specifically tailored for his body shape. Mahogany braces are used for the back, with spruce braces for the top. The braces are carved to a point to retain stiffness, with fluted sides reducing mass. Finish is applied inside the body for enhanced reflections and brightness.

Both necks are laminated. The Sunburst features three wide strips of Brazilian mahogany sandwiching two maple veneer layers. The mahogany was sourced from Cardiff University, after many decades of service as writing benches and vanity screens. The Natural’s neck is maple sandwiching rosewood veneers.

It’s a stable method of construction and since Dave regards two-way truss rods as “the work of the devil”, he uses a single-action, vintage-style truss rod. He argues that truss rods should be “homogenous with the wood” and air gaps should be avoided to optimise tone.

The rounded necks possess considerable depth. Dave describes himself as “pretty unrelenting about neck size, because it’s all about rigidity, and combining a cylinder-built body with a stiff neck and stiff neck joint” results in better sustain. He will, however, make slight alterations to meet customer’s requirements. The necks are glued in, but rather than the Martin-style dovetail, Dave prefers Somogyi’s dowelled-tenon method.

With both guitars newly strung with Elixirs, the family resemblance and tonal contrasts are equally apparent from the first strum. Starting with the similarities, the first thing that strikes us is the extraordinary sustain. It’s almost like playing an upright piano with a weight leaning on the sustain pedal.

Then there’s the clarity, treble sparkle and a feeling of effortless power. These guitars do not need to be played hard to generate a lot of sound and there’s considerable dynamic range to go with the lightning transient response.

The Natural’s shallower maple body makes it leaner in the lows than the Sunburst, but it’s far from bass light and could give many rosewood and mahogany OMs a run for their money. The bass is very defined and punchy and this combines with a strong midrange and a high-end that’s borderline ethereal.

It’s every bit a guitar, but there are harp and harpsichord attributes, too. Drop to DADGAD and its credentials as an outstanding fingerstyle instrument cannot be denied. But go to Vestapol or standard tuning, and the tone leaves the old country for the New World as Celtic slides into country blues.

The Sunburst combines subtlety with formidable power and dynamic range. There’s ample sparkle, but the treble is somewhat less stratospheric than the Natural’s. Instead, single notes have a more rounded and substantial quality that’s underpinned with a thunderous bass response that stops suitably short of boominess. We also hear a touch more of that lingering reverb effect, as harmonics bounce around in the box long after a note has been struck.

We don’t get quite so much of the pond-hopping vibe from the Sunburst because it feels more sonically rooted in the British Isles. A wonderful all-rounder in standard tuning, the Sunburst also revels in open tunings and almost dares you to keep dropping those low strings. Even with a set of 0.012-gauge strings, a low C retains considerable strength and clarity.

Despite the neck depths, both guitars feel easy to play and, as with mid-50s Gibson necks, the size is soon forgotten. Artfully slotted nuts contribute to smooth tuning, but we find the Gotohs a little imprecise. That said, we notice that these guitars, like V-Class Taylors, don’t fluctuate around the pitch when using a strobe tuner.

There’s some impressive woodworking here but, as ever, Dave’s focus is on tone and playability rather than exquisite marquetry and immaculate finishing. They’re solidly built – although far from overbuilt – and the odd bead of glue squeeze-out and stray bits of wood inside the body are all part of the quirky charm.

Dearnaley acoustics feature exceptional tonewoods and have an endearingly artisan vibe. These are not ‘guitars as art’ and they’re not intended to hang on walls to be admired. Instead, they’re built to be played and provide decades of sonic intrigue and inspiration. On that score, these guitars are a resounding success. Dave’s long-postponed move into acoustic building has been well worth the wait.