Almost a century on from its inception, there’s still something about the infectious rhythms and swooping solos of gypsy jazz that captures the imagination. This is due in no small part to Belgium’s dapper guitar legend Django Reinhardt, whose fretboard pyrotechnics remain the gold standard. In an appeal to the pencil-moustached jazz hero in all of us, Eastman Guitars has released this DM2/v model – a rosewood and spruce guitar that, thanks to its Antique Varnish finish, certainly looks the part.

The 1930s were a fascinating time in the guitar’s history. As players around the world pushed the boundaries of the instrument, the connecting theme throughout was a need for increased volume. In this interim period, before the widespread use of reliable amplification, guitar makers developed ingenious designs to give their instruments more punch.

In 1932, French company Selmer paired up with Italian luthier Mario Maccaferri to produce a new design with a large D-shaped soundhole and an internal resonator. The relationship between Maccaferri and Selmer only lasted a couple of years but the company continued to finesse the design until the release of the instrument now known affectionately as the Petite Bouche due to its small, oval shaped soundhole. This was Django Reinhardt’s guitar of choice and is the basis for the Eastman DM2/v – and Eastman has gone deep on the authenticity front in terms of both specifications and aesthetics.

A spruce soundboard with Indian rosewood back and sides is a classic combination for acoustic guitars. In the interests of vintage-accuracy, the rosewood is laminated and has a beautiful, straight-grained figure. Artful ageing aside, the Sitka spruce used for the soundboard is of good quality with some subtle cross-silking.

At the heart of a manouche instrument is the 670mm scale length and domed, ladder-braced top coupled with a tailpiece design that drives the floating rosewood bridge. All are present and correct here, as is the elegant ‘drop’ cutaway. Also pleasing to the traditionalist is the walnut neck and ebony fretboard, topped off with the requisite zero fret and slotted snakehead headstock. The Eastman logo in this case is framed by an attractive decal that borrows from the Art Deco look of the originals. The pearl dot position markers are well inlaid but beware, these guitars traditionally have a dot at the 10th fret rather than the 9th, which can really ruin your rendition of Minor Swing until you get used to it.

The Eastman comes with period-correct chunky neck specifications, which include a shouldered flat D carve and gleefully high action – a vital part of the gypsy jazz sound. Thankfully Eastman has opted for a kinder 1.75-inch nut width – some of the originals came with 1 7/8” telegraph poles and we’re simply not macho enough for that sort of thing.

While relic’ing has not been welcomed in the acoustic guitar world with the same degree of widespread enthusiasm as it has among electric players, it feels fitting and sympathetic here, with an attractive dark honey patina to the top and appropriate scratches, dings and scrapes. So much so that at first glance the only visual anachronisms are the open-gear Gotoh tuners – as all insatiable guitar nerds know, it was upon the headstocks of the original Maccaferri guitars that the world’s first sealed ‘oil-bath’ machine heads appeared. Aside from that it’s genuinely a little surreal to think that this guitar was completed just weeks ago in a workshop in Beijing.

Having lit a slim panetella and carefully selected a silk cravat, we approach the DM2/v with a heavy pick for an enthusiastic go at Sweet Georgia Brown. At the first chord the guitar springs to life with a dry, throaty bark that rattles the ribs and surprises with the depth of the bass response. C’est si bon!

Manouche guitars are intended to be hit hard and that demands an action high enough to allow the strings to move without choking on the frets. It’s a delicate balance that has been well judged here with a height of 2/32” on the treble side at the 12th fret. There’s no getting around the fact that even with the use of relatively light loop-end strings (the tailpiece can also accommodate ball-ends) this guitar will present a challenge to players more used to today’s slinky acoustic actions. That said, it’s all part of the experience.

Scrambling our way through All Of Me we find the playability to be closer to that of a vintage guitar than a modern Petite Bouche made by a luthier such as Maurice Dupont or John Le Voi, artisans whose work represents the apotheosis of the style. While the essential character is present here, some of the sonic nuances of a stellar (and correspondingly pricey) handmade manouche instrument are absent.

It’s in the single-note lines of Nuages that we hear the first real signs of any limitations in the Eastman design. In an ensemble setting, a Grand Bouche is often chosen as a rhythm guitar, with a Petite Bouche such as the DM2/v taking up lead duties, but while chord and double stop approaches yield great results, solo lead ideas lack a little immediacy and the treble string timbre becomes slightly watery as you venture further up the neck. That said, despite its looks, this is still a very young guitar and as it loosens up there’s every possibility that the response will improve.

The manouche instrument remains an important, albeit niche, member of the guitar family and, in the DM2/v, Eastman has created a guitar with much of the charm and personality of the original vintage models. It’s just the thing for those Nuits de Saint-Germain-des-Prés. 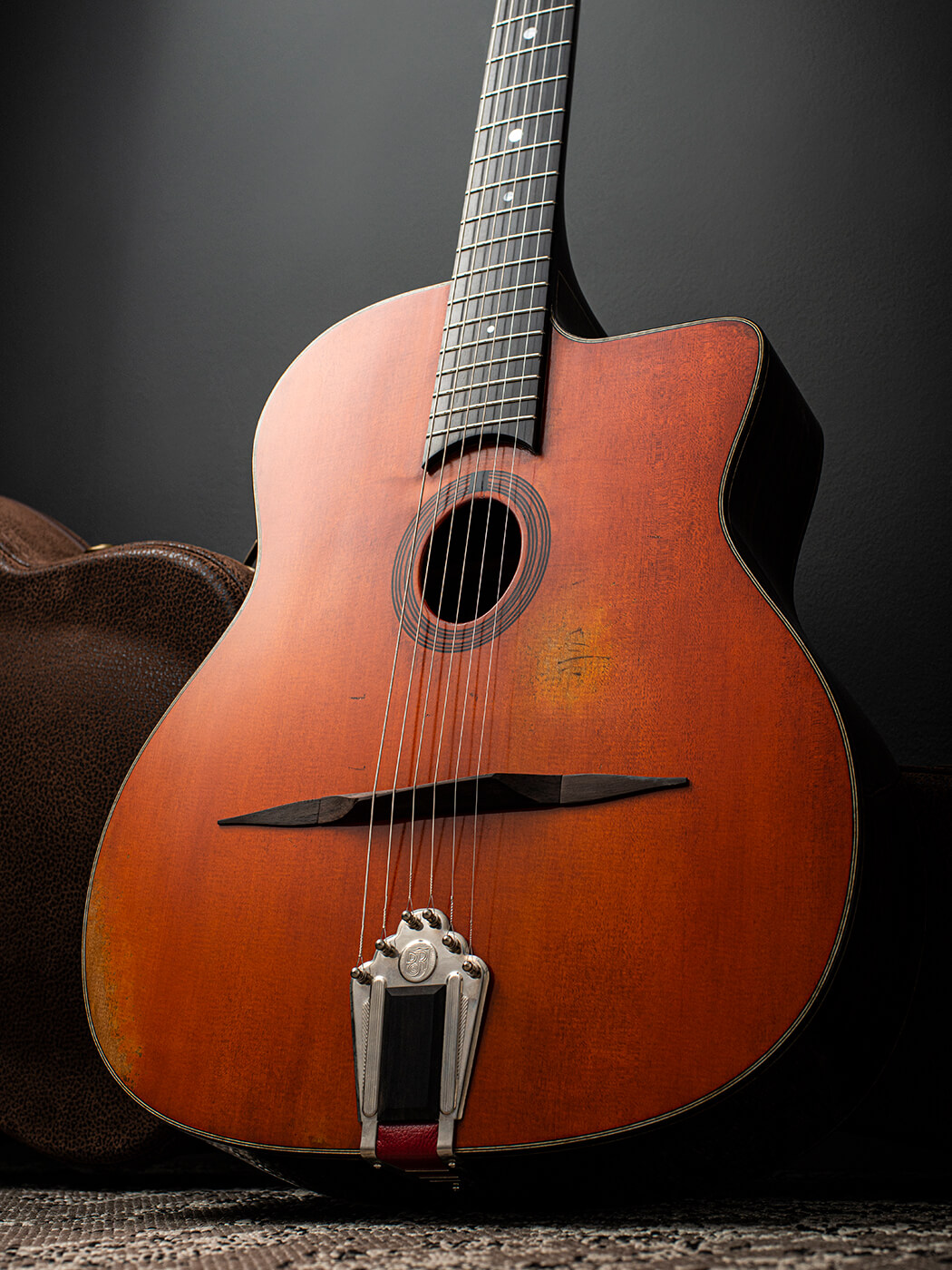