V-Class bracing has already produced stunning results in Taylor’s six-string acoustic line, but what happens when Andy Powers turns his attention to the 12-string? 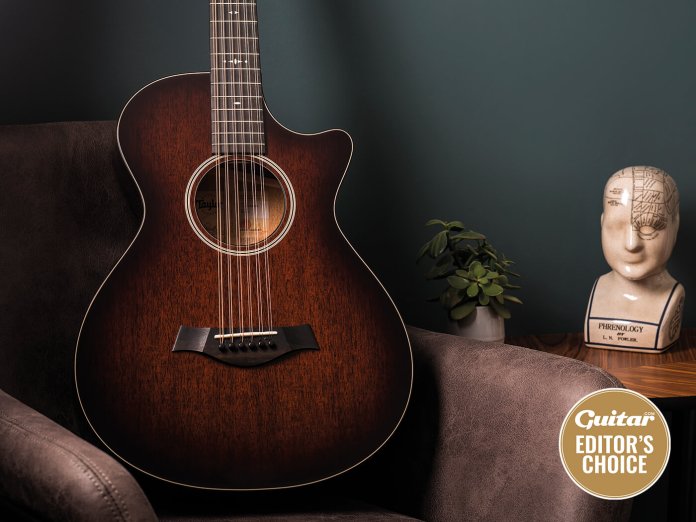 Twelve-string acoustics can present physical challenges as well as impacting on your playing technique. Happily, Taylor’s Grand Concert body measures just 19.5 x 15-inches and when coupled with a 12th fret neck join, it gives this 562ce a compact, streamlined and intimate feel. The body is combined with a shorter than usual 24.875-inch scale length, which equates to lower string tension and easier stretches.

Of course, the really big deal is that this is our first opportunity to try a 12-string equipped with Andy Powers’ V-Class bracing. First introduced on Taylor’s top-end models, V-Class bracing has since been rolling out across the company’s USA product range.

This is an all ‘tropical mahogany’ guitar, which is Taylor’s catch-all term for mahogany sourced from Central and South America. Some builders refer to it as ’true mahogany’ to differentiate between this and sapele or African mahogany, and it costs more because it’s generally considered superior in tone. Besides the spruce braces, ebony is used here for the fingerboard, bridge and peghead overlay. 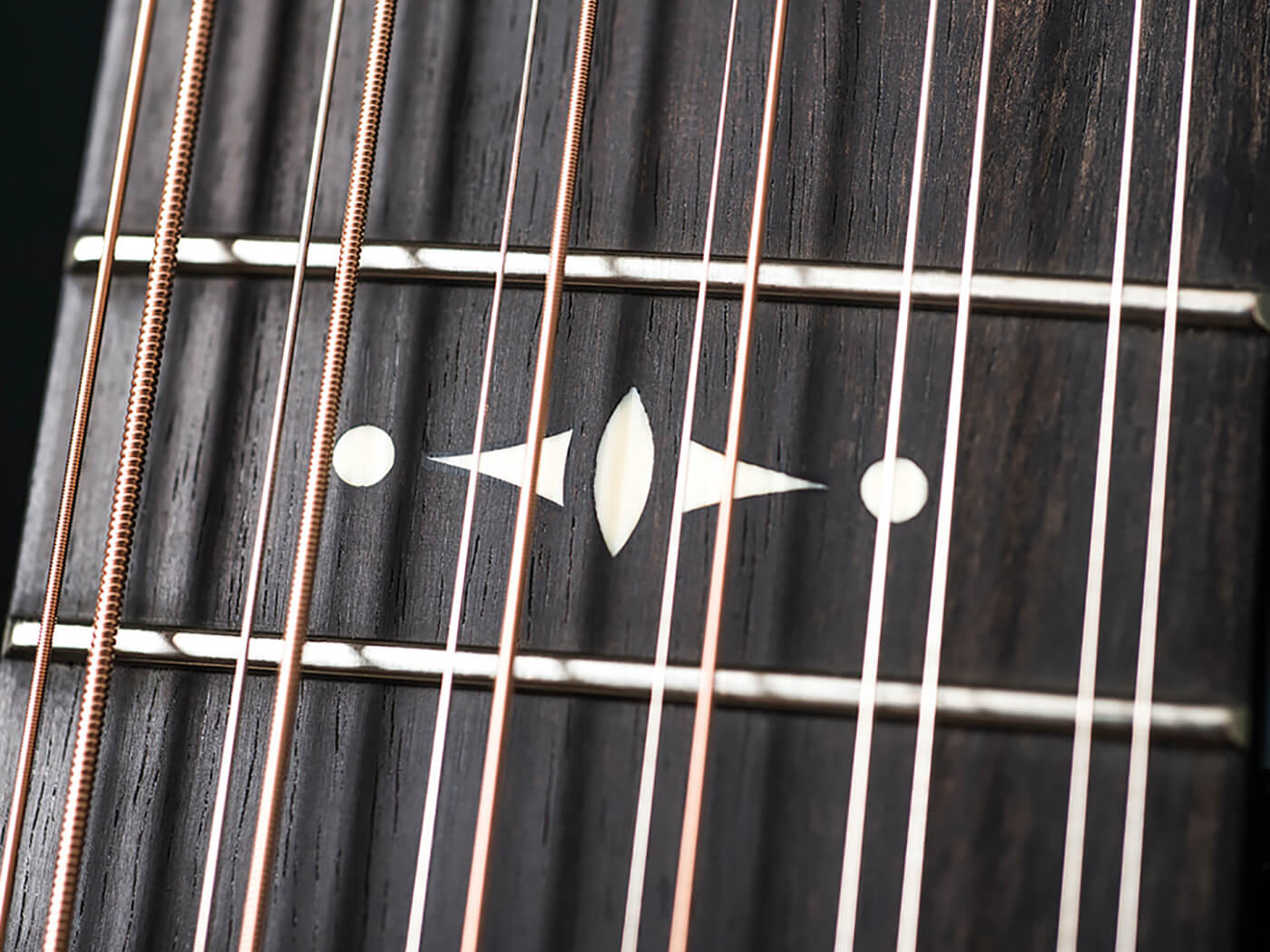 Taylor also uses ebony on the fingerboard edges to conceal the fret ends without appearing to use binding at all, and even the six bridge pins are ebony. Taylor’s new double-mounted string anchoring system means each string pairing is secured by a single pin. This maintains a consistent break angle over the saddle for greater tonal consistency.

The finishing quality is something special. The mahogany has seen some medium brown staining, which has enhanced the grain and knocked back some of the reddishness without eliminating it completely. A darker brown has been sprayed around the edges, both front and back, to create a subtle sunburst effect.

There’s more shading around the sides too, where the central areas graduate into a darker brown closer to the tortoiseshell binding. The binding itself looks spectacular in a classy and understated way. For the most part it appears a dark tobacco brown, but there are sporadic slashes of red and amber.

In Taylor terms, the 562ce is the full package, because it has a Venetian cutaway and an onboard Taylor Expression System 2. Three piezo sensors are located between the saddle and bridge pins rather than under the saddle, with three low-profile controls – volume, bass and treble – located on the upper bout just above the neck join. The latest preamp produces about 25 per cent higher output than Taylor’s earlier designs. 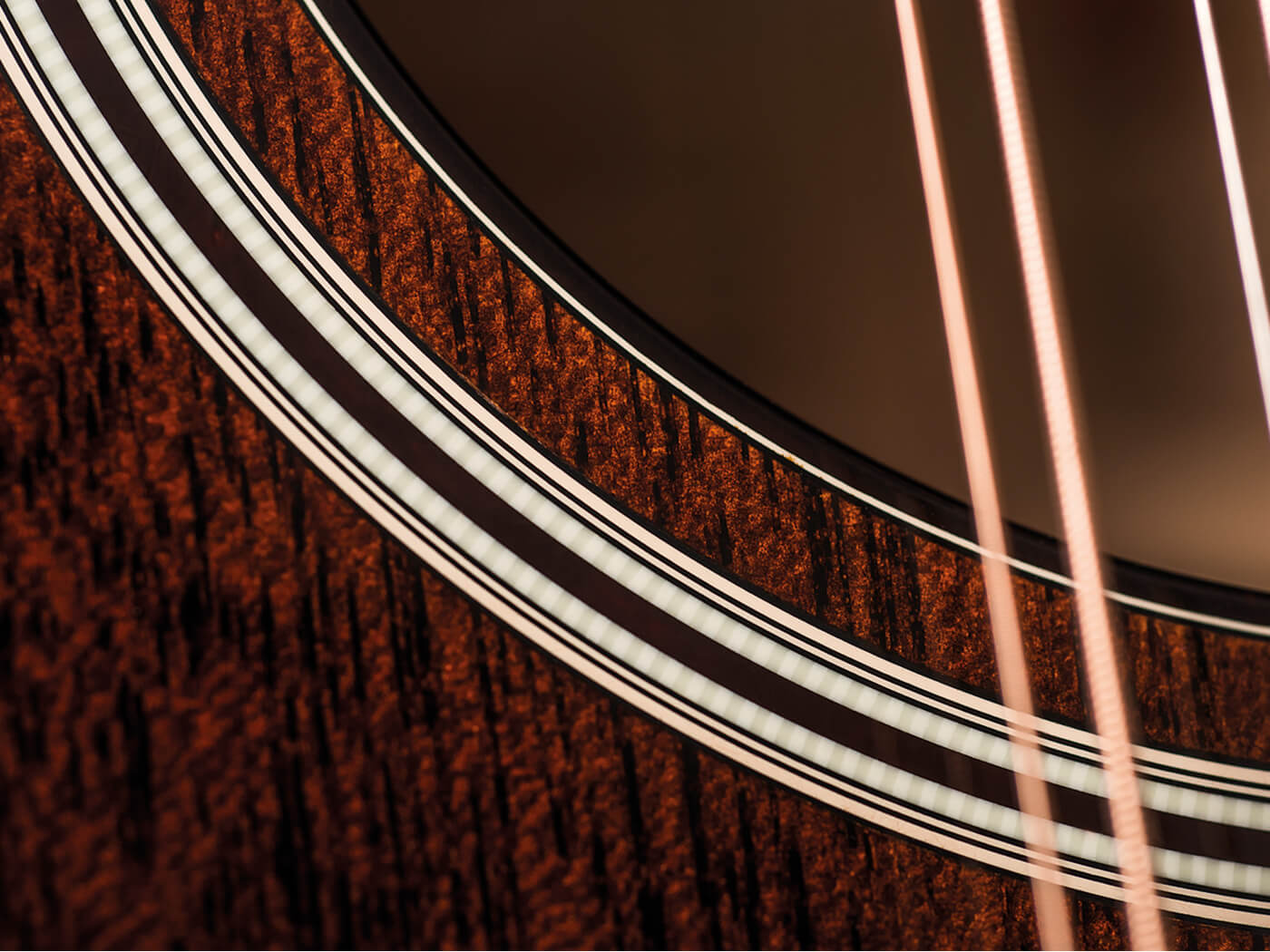 Session ace Tommy Tedesco told a story about turning up to a studio date with his acoustic, only to discover the producer wanted a 12-string. Having only brought a six-string along to the session, Tommy asked the producer to wait while he changed guitars, bounced his guitar off the floor to knock it slightly out of tune and then hit a chord. Not being able to see what Tommy was up to, the producer declared that was the exact sound he was looking for.

The reason for repeating that anecdote is that if a slightly woozy, out- of-tune character informs your perception of 12-string acoustics, the 562ce might come as something of a shock. Put simply, this is the most in-tune 12-string acoustic we have ever encountered.

We’ve previously remarked on the unusually accurate intonation of V-Class Taylors, and the same factors are at play here. We also notice that each of the E, A and D strings have individual saddle takeoff points. This is particularly apparent on the low E and its accompanying higher octave string, and demonstrates fine attention to detail. 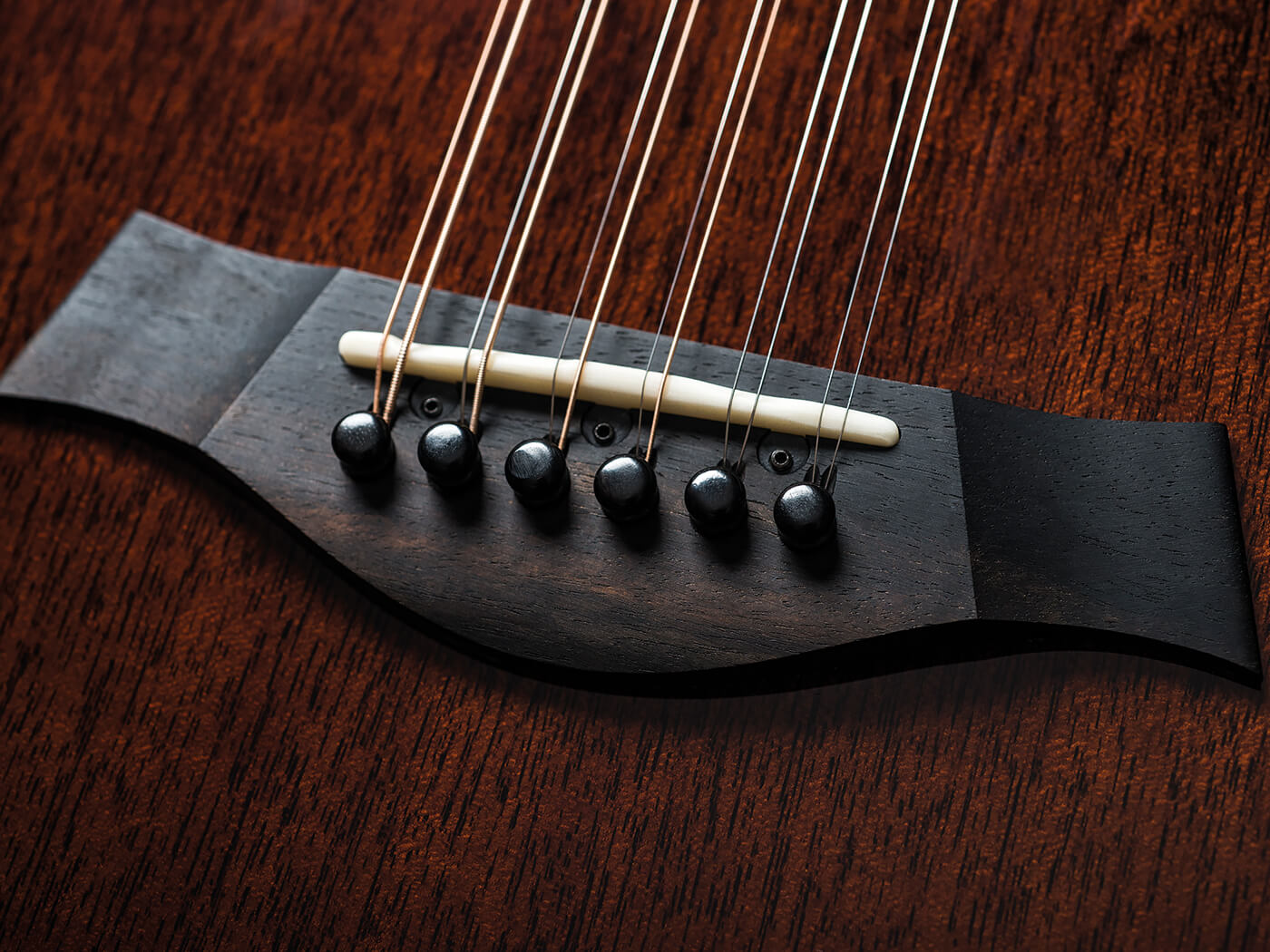 Again, we hear that pre-produced quality that we’ve come to associate with V-Class bracing. There’s no boominess, and instead the frequency and balance remain utterly even from the nut end to the top of the fingerboard. The sustain impresses greatly and there’s an absence of sonic clutter because notes aren’t beating on each other in some sort of harmonic free-for-all.

This, in tandem with the astonishing intonation, frees you up to attempt things you might otherwise shy away from on a 12-string. Try forming an E major chord above the neck join, leaving the B and all the E strings ringing open – it sounds perfect. Place your index finger on the B string and start sliding the shape around with the open E strings ringing, and it’s like Pete Townsend has been double-tracked. You can even use a capo without feeling apprehensive, and marvel as the 562ce begins to mimic harpsichord and mandolin textures.

The even frequency balance is probably attributable to the small body size as well as the bracing. There’s plenty of depth, but the bass never becomes overpowering. Similarly, the treble frequencies float and shimmer, but it’s not the dominant sonic characteristic. Instead, the midrange comes through with an articulate and fluid quality, where the octave strings enhance and add complexity without becoming the main event. 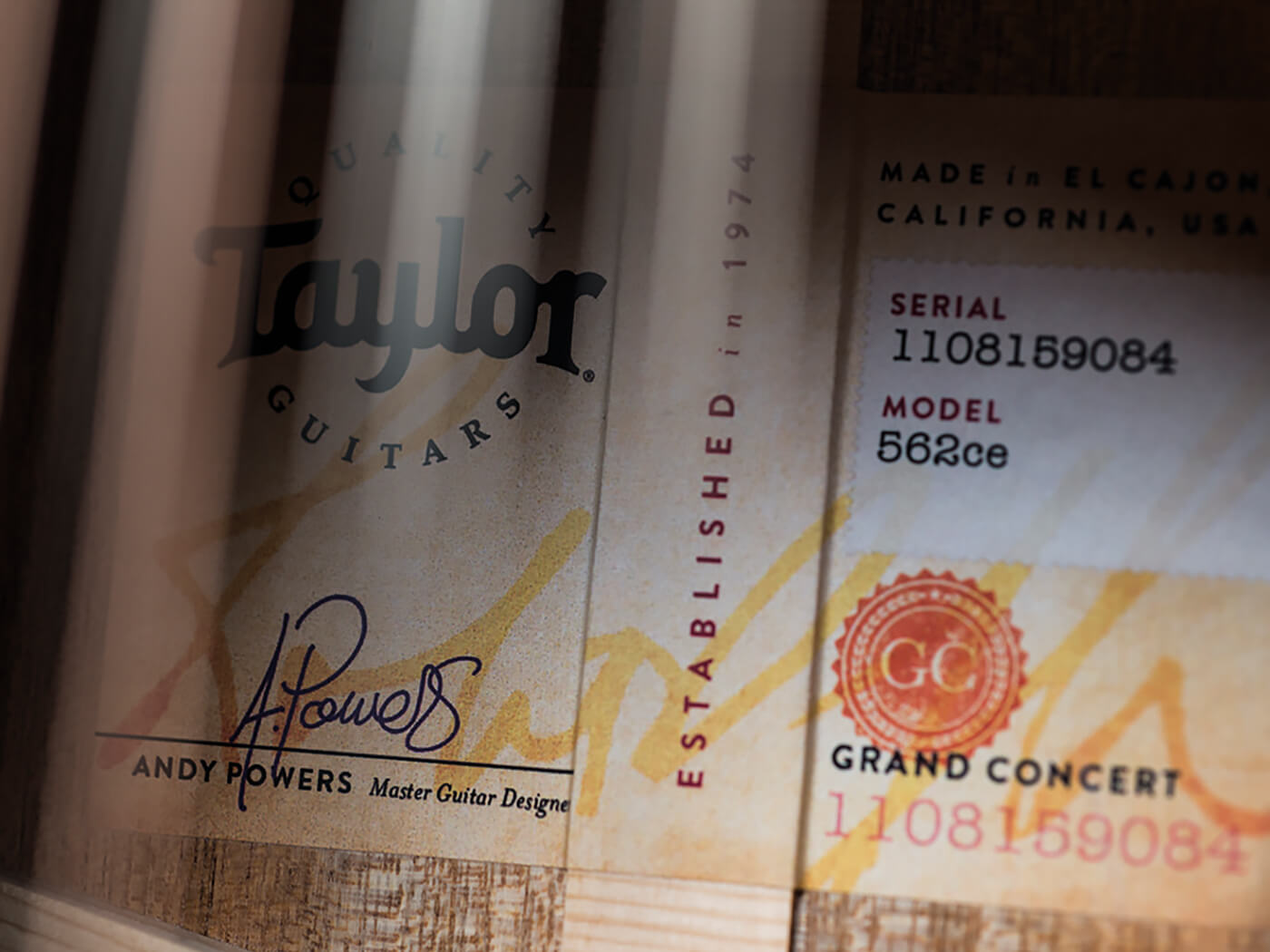 We have always rated the Expression System 2 pretty highly, but results can vary depending on the guitar. We’ve never heard it sound better than it does on the 562ce. It captures the tone in a big, full and very detailed way that sounds convincingly ‘acoustic’.

This isn’t really a 12-string for retro stylists looking to channel Blind Willie McTell, Huddie Ledbetter and Pete Seeger, but that doesn’t mean it lacks character. Instead it’s a toneful, dynamic and well-mannered 12-string that’s almost as easy to play as a six-string.

We remain unconvinced by the practice of combining a cutaway with a strap button on the underside of the heel, but aside from the plastic truss-rod cover, everything about this luxurious instrument justifies its price-point, and it’s clearly intended for the most serious and committed 12-string players. For many of us, 12-string electrics and acoustics tend to end up as ‘special effect’ guitars, but if the glorious tone and playability of the 562ce don’t convert you, nothing will. 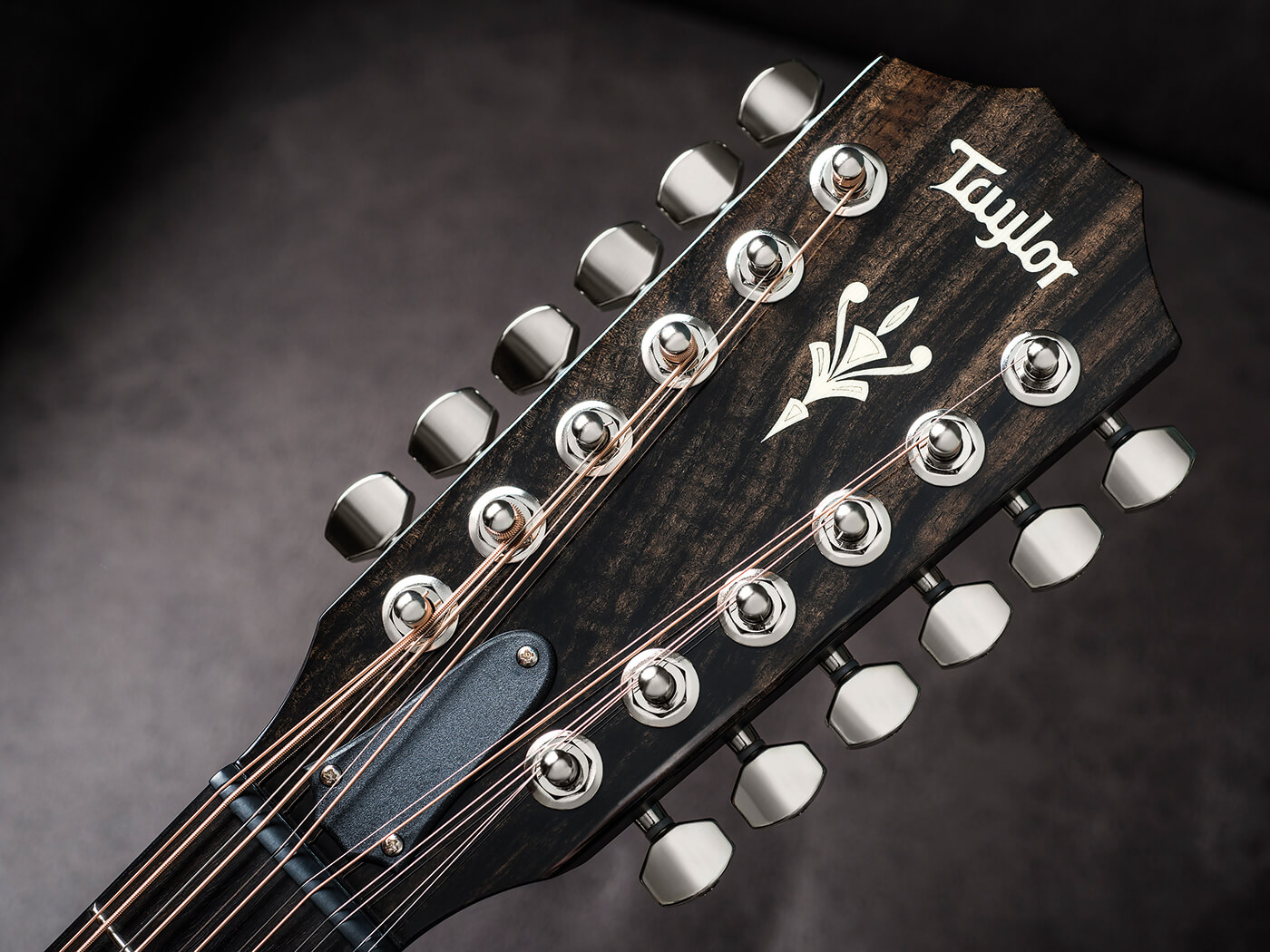 Joe Bonamassa on the “insane” experience of jamming onstage with Eric Clapton: “I was shocked to find out that he knew who I...