Taylor Guitars doubles down on V-Class bracing with some new touches at both ends of the price spectrum. 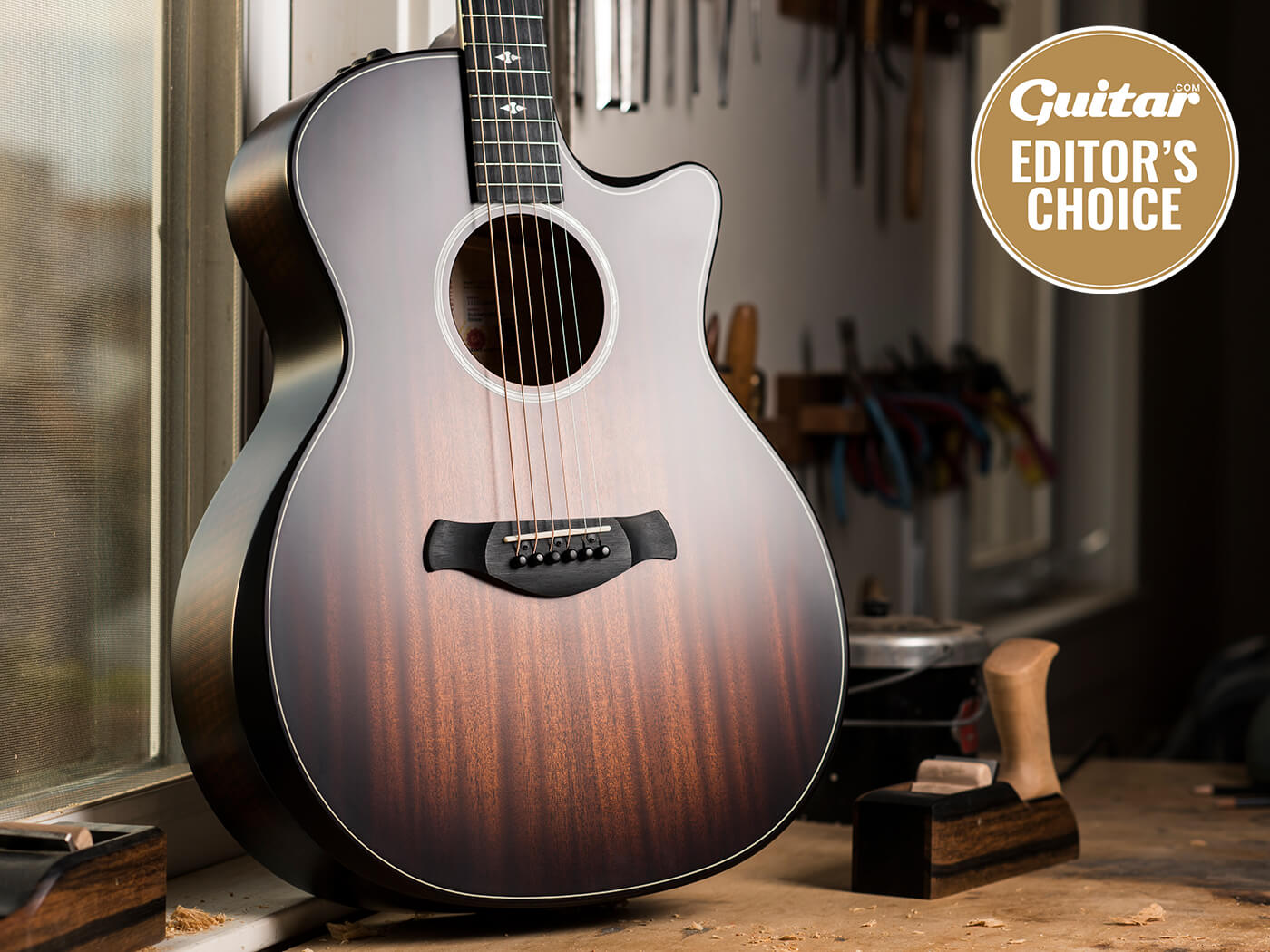 We sometimes wonder where Andy Powers gets the energy. In between surfing, hiking, parenting, playing guitar to a world-class standard and displaying expert knowledge of everything from carpentry to avocado cultivation, Taylor’s resident polymath somehow finds the time to continue to push boundaries in mainstream guitar making.

It’s at the Builder’s Edition level that many of Powers’ innovations first appear, subsequently trickling down to more affordable price-points in the Taylor catalogue. For 2020, the Builder’s Edition collection is expanded with a quartet of new guitars and here we’re taking a close look at the 816ce – a Grand Symphony model with some striking design elements – and the 324ce, a stage-ready Grand Auditorium in a courageously unusual wood combination for a brave new decade.

Back in the day, one of the first and longest-running handmade acoustic guitar festivals took place on a biannual basis in Healdsburg, California. Here, luthiers who specialised in exquisite bespoke instruments would gather to exhibit their latest creations with price tags often in five and even six figures.

With this festival came the phenomenon known as the ‘Healdsburg Special’ – a guitar bristling with every modern handmade luthiery flourish known to man, from body bevels and fanned multi-scale fretboards to exotic bracing solutions and soundports (often with little trapdoors) and usually constructed from the rarest and most visually spectacular woods available such as Brazilian rosewood, quilted mahogany from ‘the tree’ and mineralised sinker redwood, to name a few. 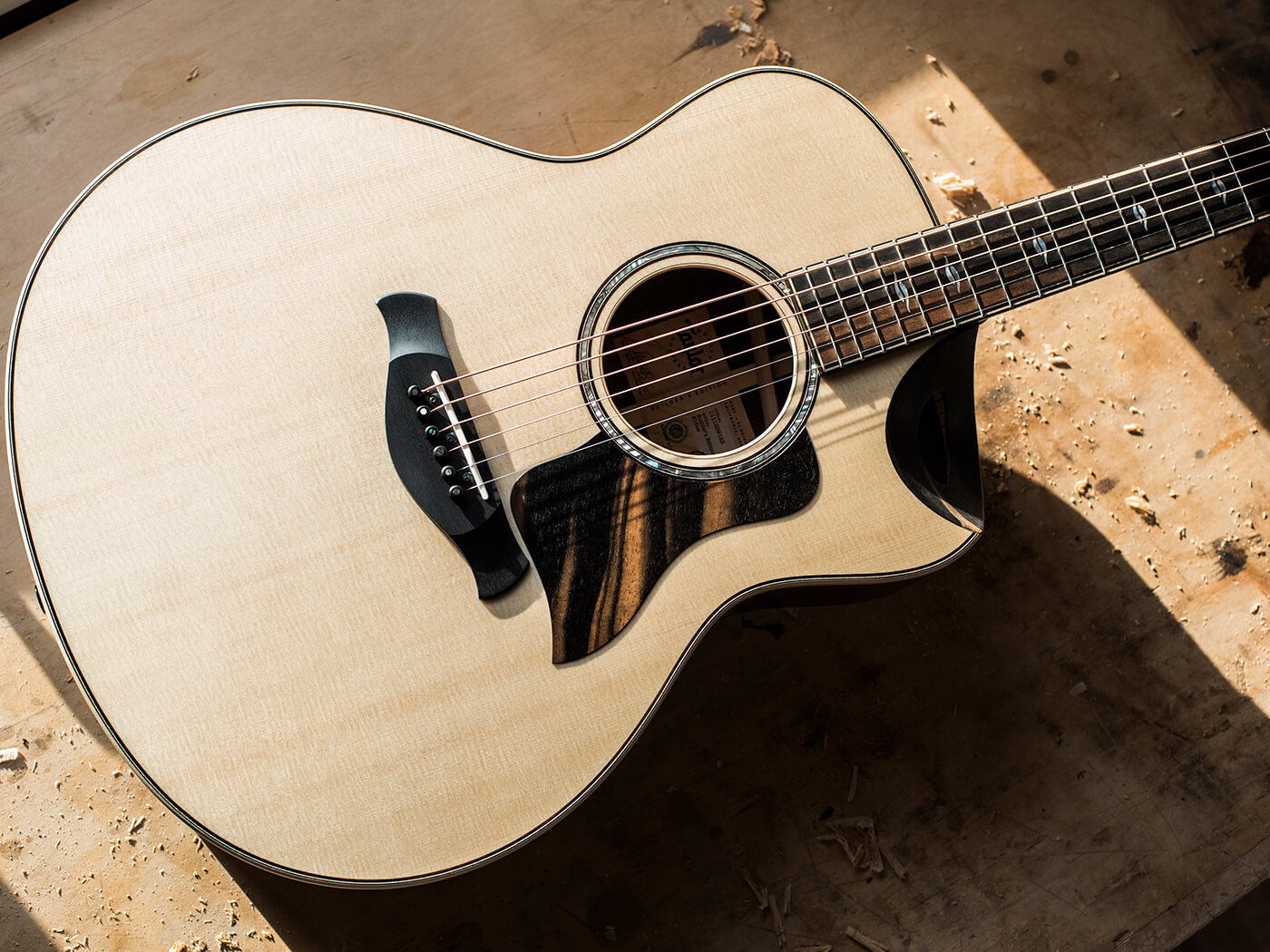 Taylor’s design language has changed dramatically with the Builder’s Edition and our first thought upon receiving this guitar is that it’s a step towards Taylor’s own ‘Healdsburg Special’, with the addition of a partial cutaway containing an elliptical soundport executed in figured Cameroon ebony on the treble shoulder of the guitar.

In the past 20 years, soundports have been used in steel string guitar design with varying degrees of success, usually depending on whether the port was an integral part of the instrument’s original design rather than a nice touch to add to the luthier’s price-list. 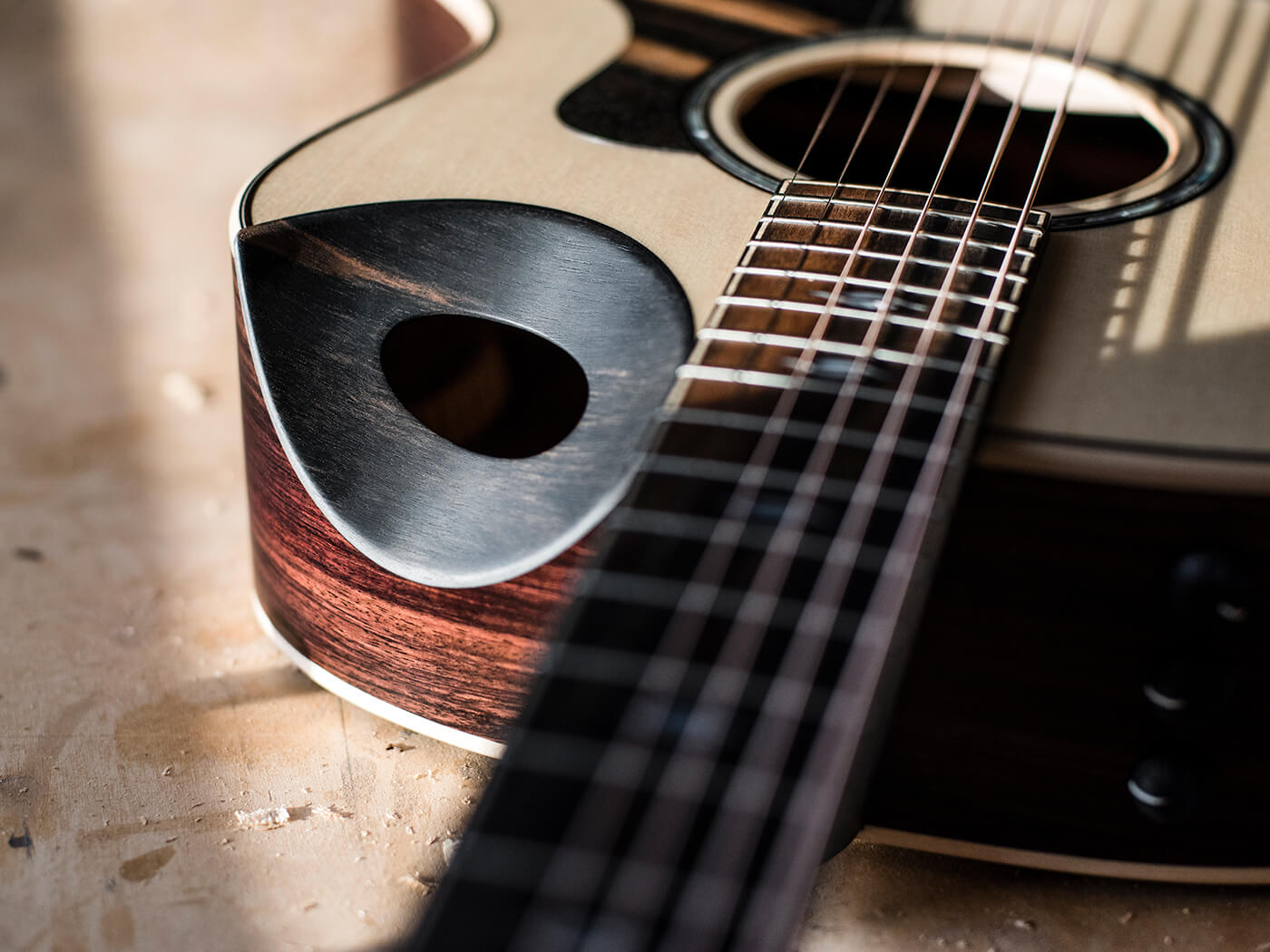 In a conversation this reviewer enjoyed with William ‘Grit’ Laskin at the 2016 Holy Grail Guitar Show in Berlin, the pioneering luthier revealed that his thoughts on soundports had sprung from learning that the waveform of a guitar’s low E (82.4Hz) was around 15 feet in length and as such it made sense to let it “escape”.

Andy Powers’ own thoughts support this idea of ‘freeing’ the wave: “The lung capacity of the guitar is distributed over a larger range of frequency and a longer amount of time, so the sound comes out as very fluid. It strikes us as a strong voice that is both dynamic and filled with lyrical musical quality”.

Soundports have the potential to transform the voice of an instrument, opening up a full spectrum of frequencies and nuances for player and audience alike. It is, admittedly, rare to see them used as part of a cutaway with the most common placements being in the shoulder and/or waist of the guitar. However, as Powers explains, having a soundport at a 90 degree angle to the main soundhole can affect the guitar’s ability to articulate clearly and so the idea of a closer soundport within a cutaway was born. 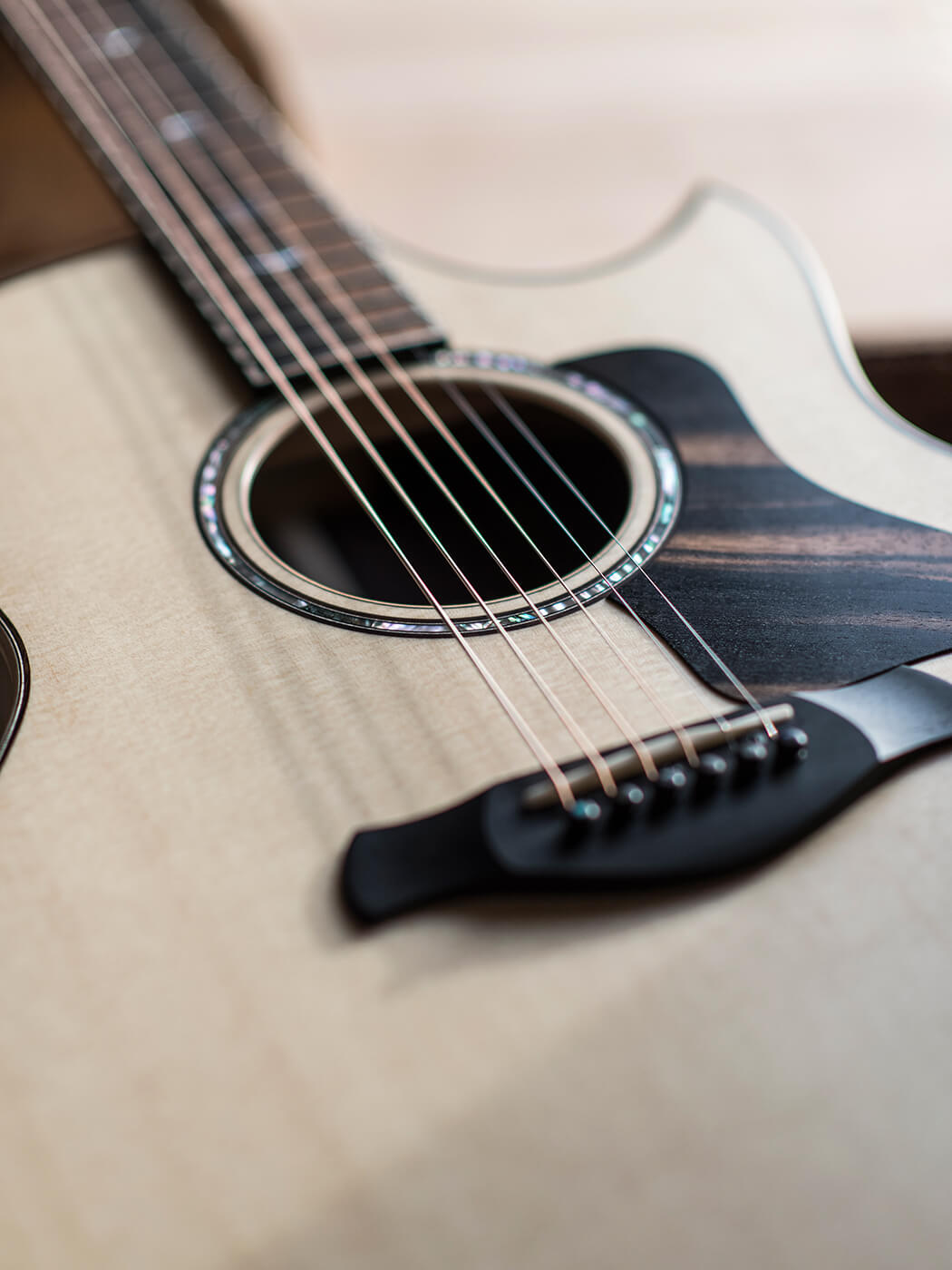 The aim of a partial cutaway is to offer the player as much upper-fret access as possible, without unduly compromising the amount of air in the chamber and soundboard size with a full cutaway. The design here has been well executed with a single, curved piece of ebony and without the need for extra internal kerfing to support the structure, which would quickly add weight to the guitar.

Granted, luthiers such as Germany’s Theo Scharpach and the UK’s Nick Benjamin have used the scoop cutaway approach for a number of years, and credit for soundports in modern steel-string guitar luthiery should lie directly with the aforementioned Mr Laskin – whose contribution to modern guitar making cannot be overstated. However, we believe this is one of the first instances where those ideas have been combined, effectively recontextualising them for a wider market.

Ideally none of this should distract from the tasteful wood choice of Indian rosewood and Lutz spruce – a popular hybrid of Sitka and white spruce – which has found favour with many luthiers. Here we have a beautifully straight-grained quartersawn set of dark Dalbergia with some orange flecks for good measure. The Lutz spruce top is a creamy shade of pale with dark winter growth lines in the grain, which tightens beautifully towards the centre of the bookmatched board. In a time where quality materials are becoming increasingly scarce, it’s good to see woods of this calibre on a production instrument.

As expected, the top is underpinned with Andy Powers’ V-Class bracing design with its characteristic longitudinal stiffness. It’s similar in execution to the bracing in a fine archtop – just applied to the strutted monocoque construction of a steel string soundboard. And it works. Which is the main thing.

The ebony theme of the partial cutaway is echoed with a figured fretboard and pickguard in the black and orange Macassar ebony. What effect a hardwood pickguard may or may not have on the soundboard’s flexibility remains unknown. 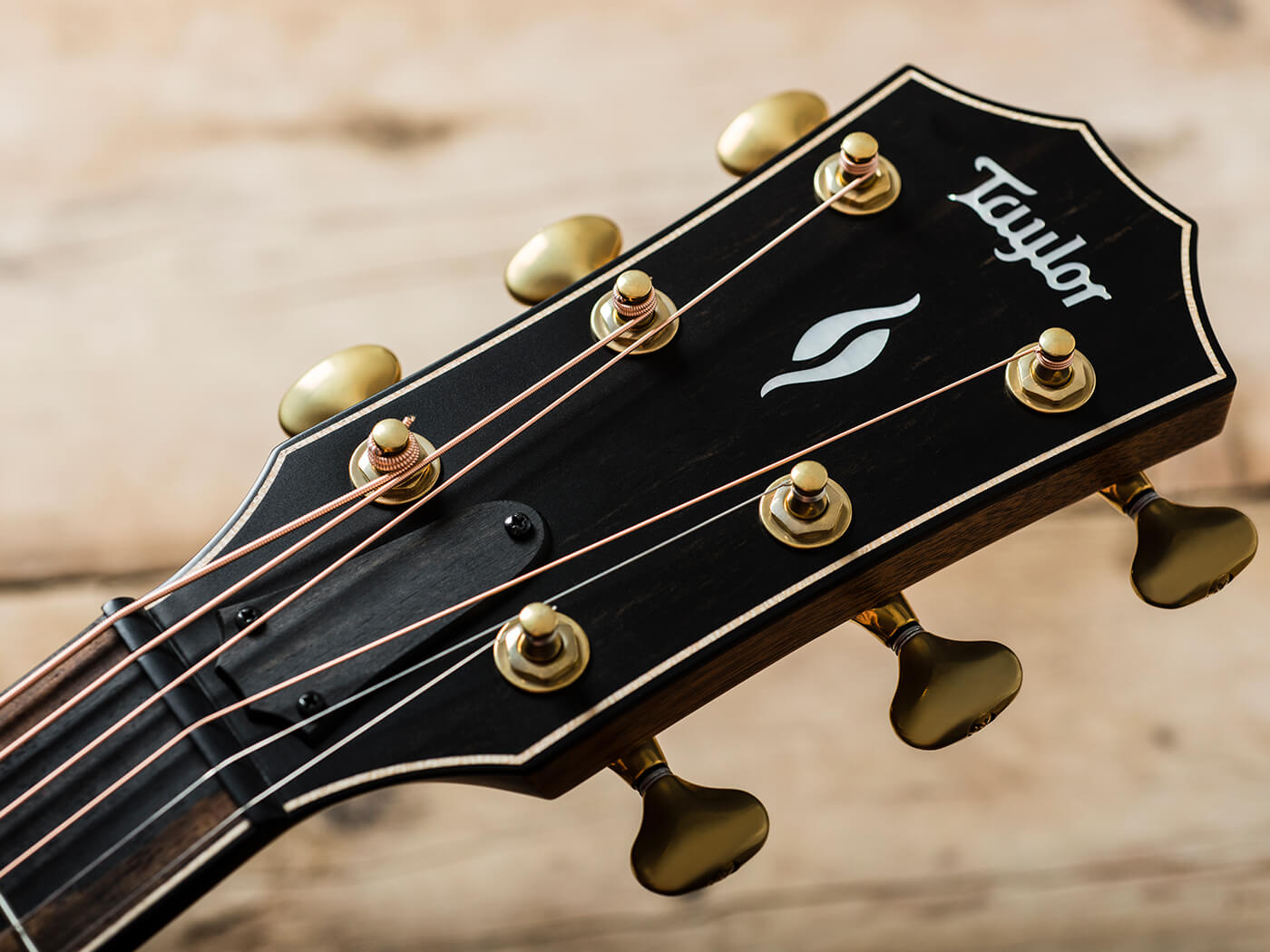 The headstock veneer and ‘Curve Wing’ bridge (coming close to the sublime lines of Jeff Traugott’s design) are of regulation black ebony. The otherwise elegant maple and ebony body and fingerboard bindings should tie the optics together, but it is a little jarring that they stop so abruptly at the edge of the cutaway.

Taylor guitars are renowned for their playability, and this 816ce is no exception in that it feels exactly like a Taylor should. The neck, while a little skinny for solo fingerstyle, will strike 99 per cent of the acoustic guitar playing population as slinky and delicious. The 24-7/8-inch scale length makes expressive vibrato and bending a joy, and the fretwork is uniformly excellent. The slim, slight V carve was seemingly moulded from a thumb-over the top G chord and grants a damn-near effortless first position experience, although the corner of the nut could use just a touch more rounding. 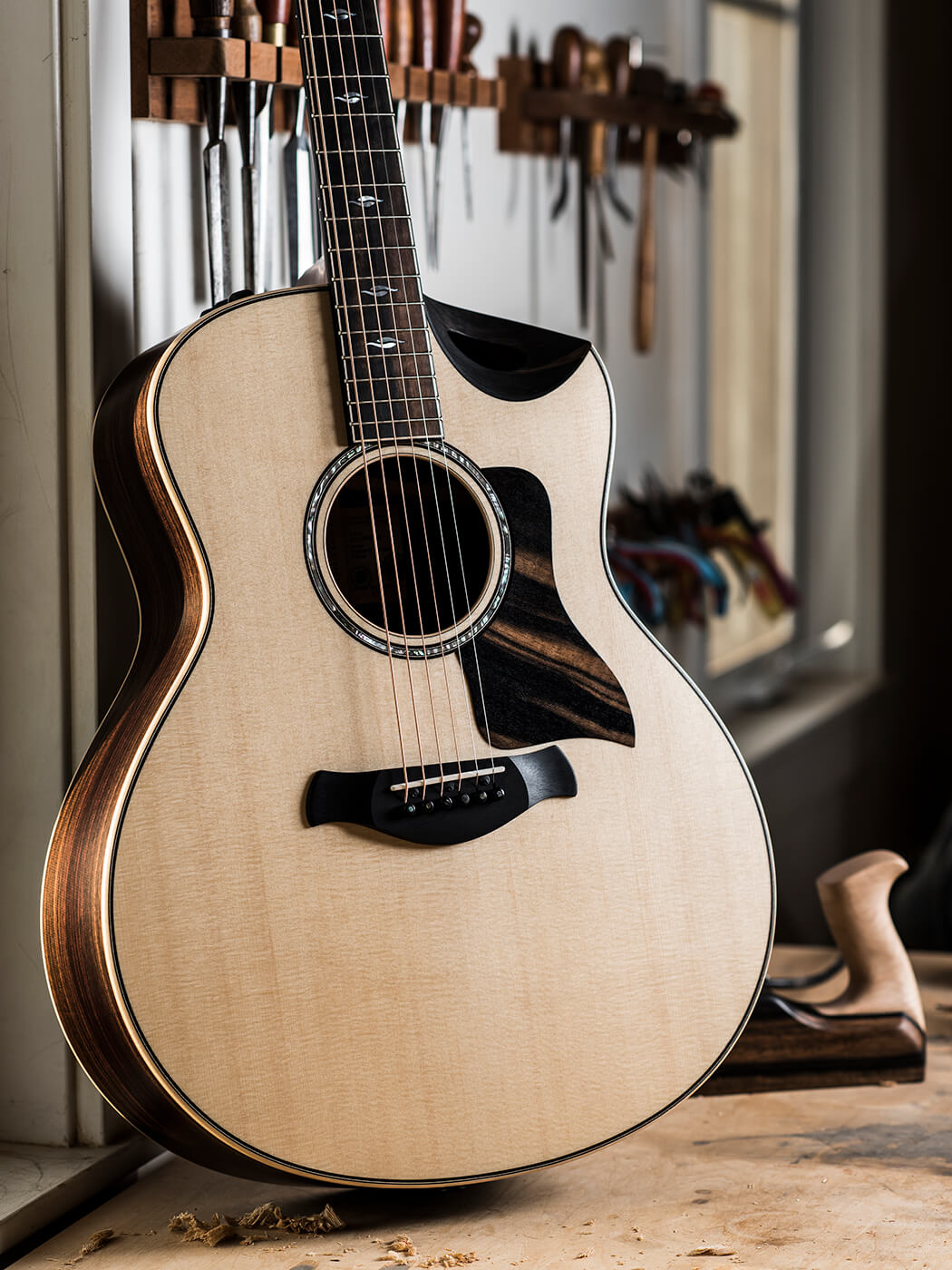 In order to gauge the impact of the soundport design, we take the unusual step of blocking it off with a piece of foam for the first chords. The guitar’s voice is typical of a high-quality spruce and rosewood instrument with a reverb-like character to the notes that works as well for spacious, expressive playing as it does for a more intricate approach. The bass response is truly haunting at times and the low end sustain is exceptional. However, the treble notes die off relatively quickly making for a slightly imbalanced decay envelope. This should, of course, smooth out as the instrument matures.

Even with the soundport covered the 816ce provides a great example of the Taylor sound, but with the foam removed there is a marked difference – the instrument comes to life, with an immediately open and beautiful voice, which gives us the sense of being surrounded by the sound. Dropping the tuning to DADGAD and applying a medium gauge celluloid pick to the 816ce takes the performance up yet another notch, giving the trebles a silky shimmer all the way up the fingerboard, while lending muscle to the bass and low mids. Improvements to upper-fret access offered by the partial cutaway are largely subtle, due in part to the depth of the neck heel. 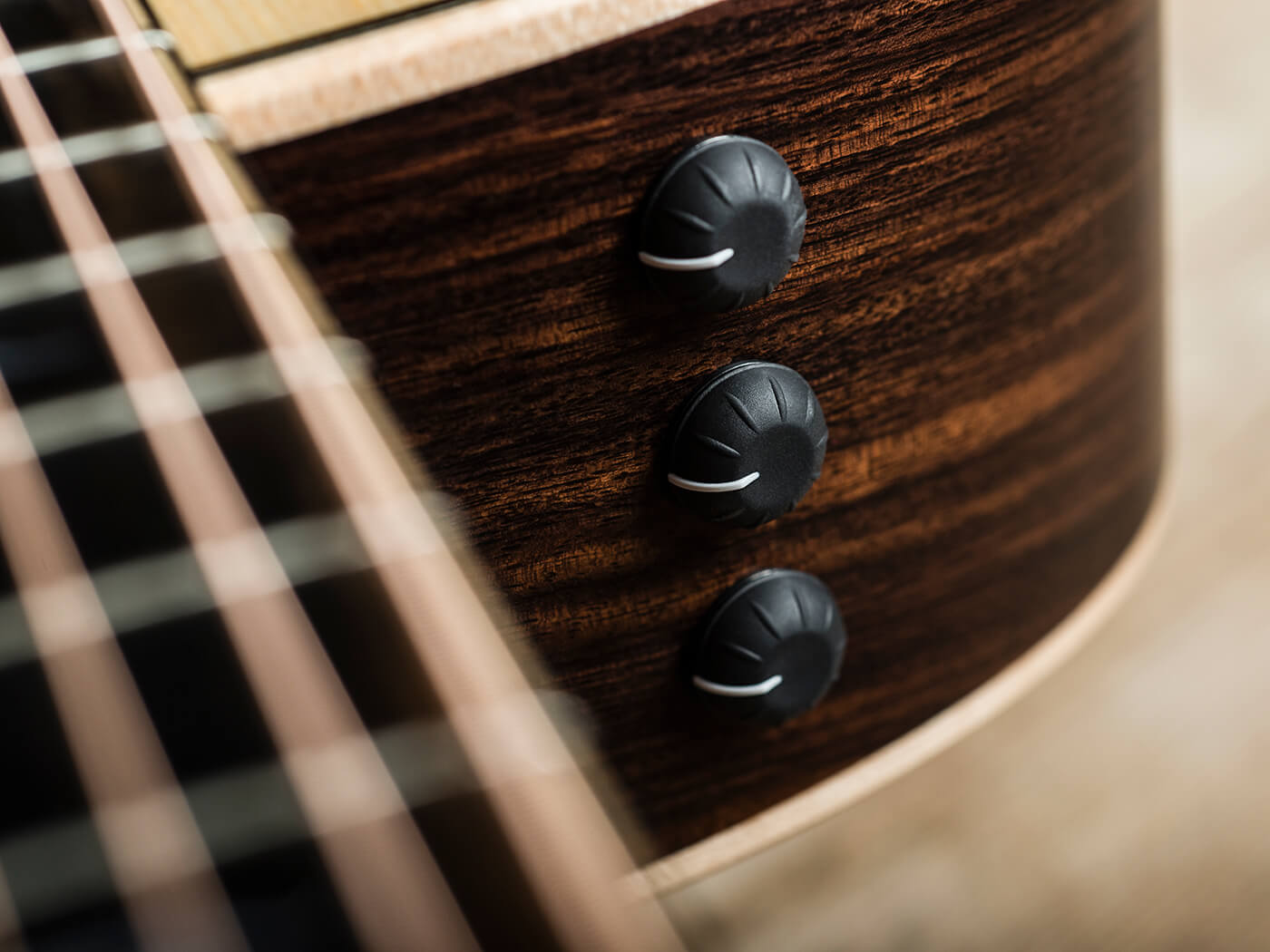 One bone of contention when soundports are discussed is that they can often make an instrument more difficult to control when plugged in. Cranking up the Builder’s Edition 816ce through a Fishman Solo, at coffee shop gig volumes we find the guitar’s lively acoustic personality comes through well, without it taking off in a stratospheric howl of feedback. Larger venues and the use of wedge monitors may yield different results…

Recording with the 816ce is a fun process as the soundport offers new and intriguing options for microphone choice and positioning. We find the combination of a Coles 4038 ribbon mic behind the bridge and a Gefell M300 small capsule condenser pointed off-axis towards the soundport make for particularly inspiring results – especially when strummed.

Taylor’s cutaway Grand Auditorium is an objectively lovely silhouette and, in this Builder’s Edition 324ce guise, it features additional ergonomic flourishes in the shape of rounded body edges, a Kevin Ryan-style forearm bevel and a bevelled cutaway. Posh!

In an effort to make the design elements of the Builder’s Edition more fiscally accessible, Taylor has turned to the unusual recipe of a mahogany soundboard with back and sides of ‘urban ash’ – a name Taylor has given to the Shamel ash trees that grow abundantly in urban areas of Southern California such as Riverside and the LA Basin. 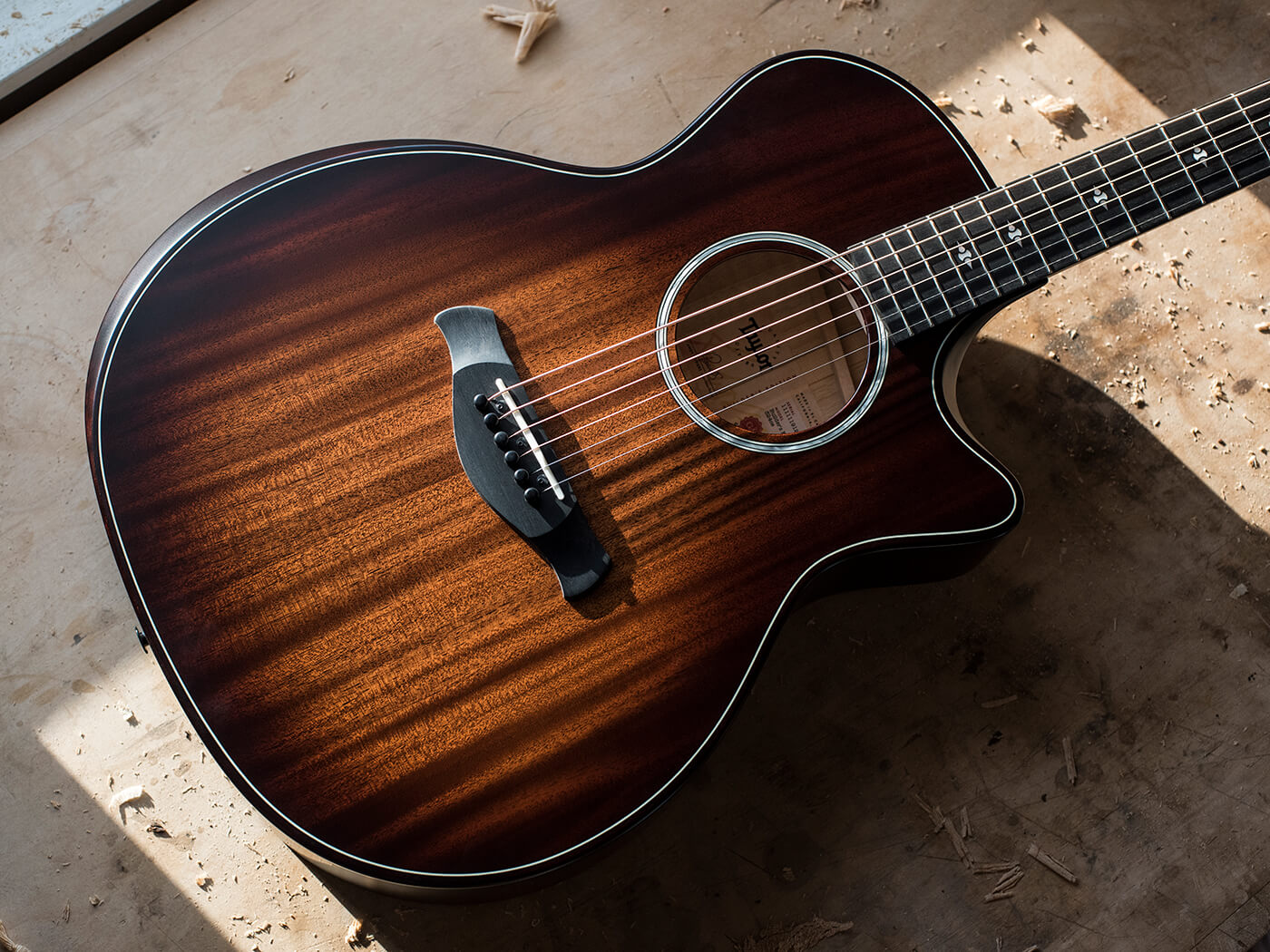 This is not the first time Taylor has paired a mahogany soundboard with an unconventional wood for the back and sides and Andy Powers has gone on record as saying that the response and voice of Urban Ash is very similar to good Honduran mahogany.

It’s certainly spectacular looking stuff under Taylor’s brooding Silent Satin sunburst finish, with a dramatic figure reminiscent of the white oak and birch guitars of the early 20th century, almost maple-like but without that level of depth to the chatoyance.

The mahogany neck has been given the same burst treatment as the body, with an unbound ebony fingerboard featuring a nicely-judged position marker design. This, along with the abalone rosette, is the only concession to bling. The ivoroid coachline body purfling also adds to the elegance. Once again, the guitar comes stage-ready with Taylor’s ubiquitous ES2 active pickup system ready to plug in.

Taylor’s Grand Auditorium is a famously comfortable design and the light weight of the Builder’s Edition 324ce, coupled with its bevelled edges, means it’s a joy to play, both seated and standing. 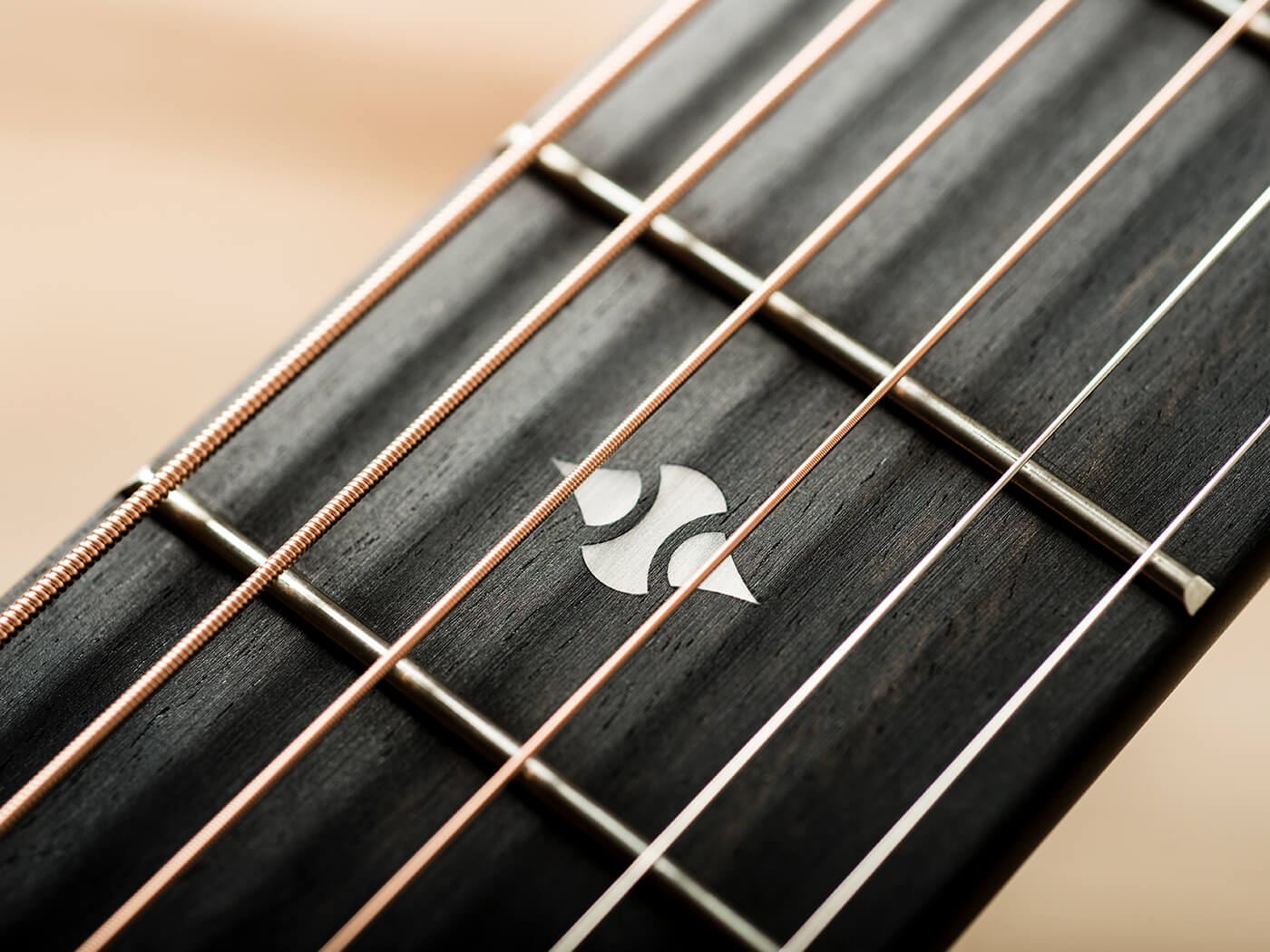 The sonic range occupied by the 324ce, while limited when compared to the sound-ported voice of the 816ce, occupies a very musical sweet spot. The treble response when fingerpicked is particularly smooth and inviting. It’s a sound that works well on its own and excels with vocals.

The bass of a GA is never going to blow a dreadnought away, but here it is present and supportive. Like any mahogany-topped guitar, it’s a touch fuzzy when pushed with the thumb and the fundamental voice means while the upper partial harmonic content when fingerpicked will never overpower, it’s an engaging and very musical sound in which you can easily lose yourself. 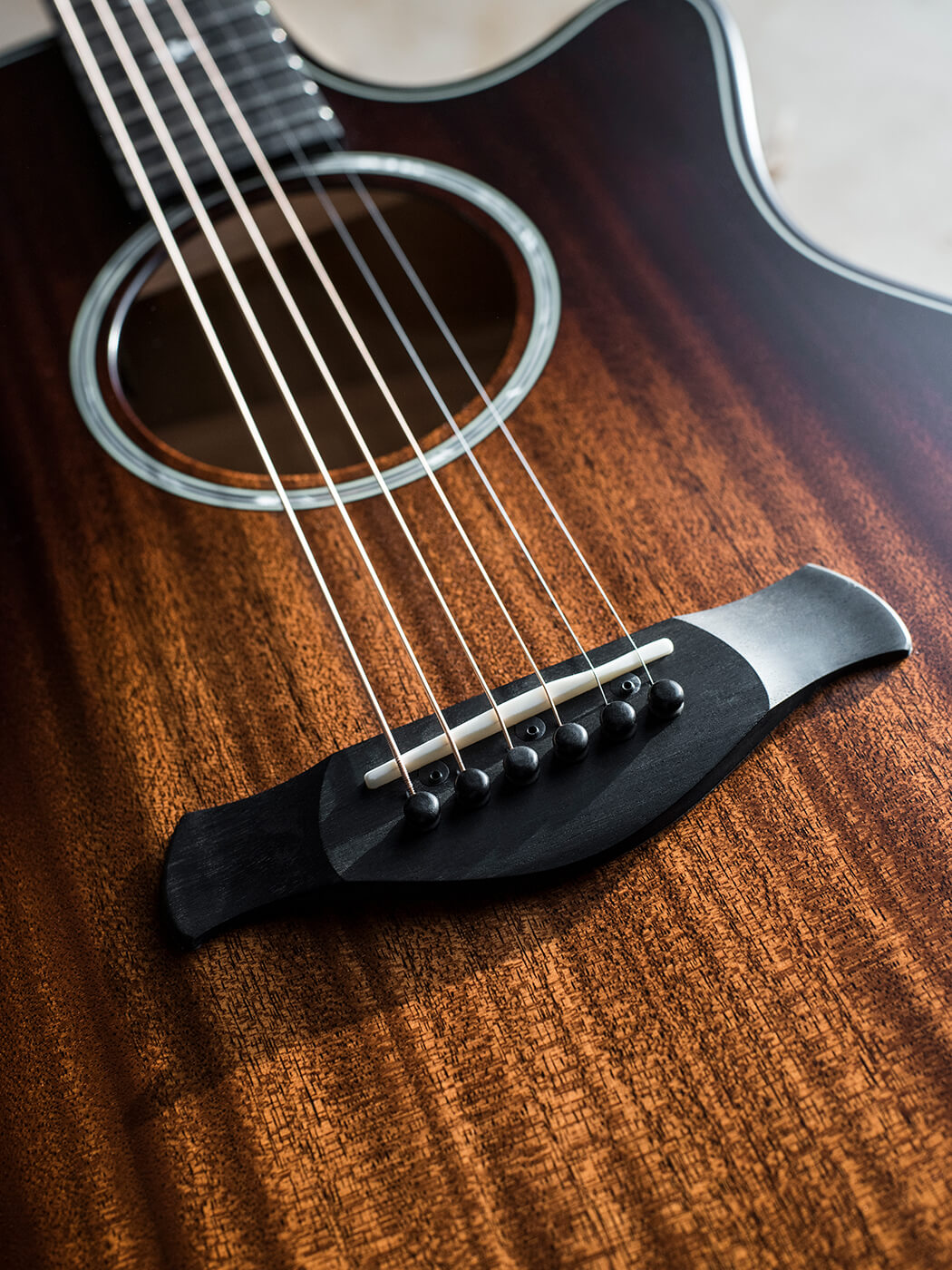 Introducing a plectrum to proceedings reveals another side to the 324ce’s character. Andy Powers describes it as being similar to a 1932 Ford Roadster: “Like a hot rod, the concept was to remove anything unnecessary”. That certainly seems to be the case here as this is a potent little box! Digging in with a pick brings out a growling bass and shimmering liquid trebles which make it a surprisingly convincing guitar for bluegrass and manouche styles as well as singer-songwriter rock contexts. It’s a balanced voice which decays smoothly to silence. It also fits beautifully into a mix when recorded. 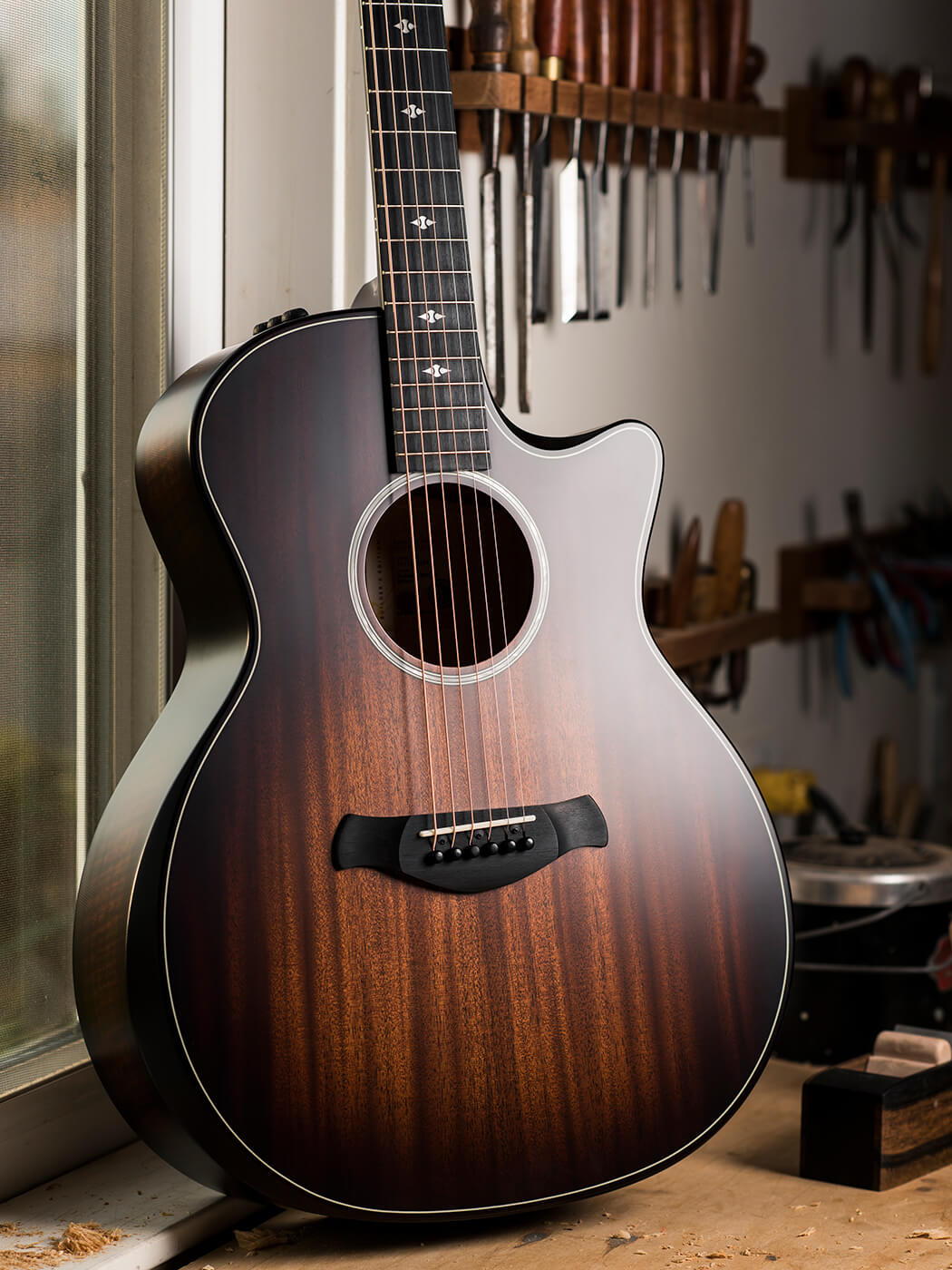 It’s quite remarkable to consider the ground that Taylor has covered within the Builder’s Edition collection so far and it is certainly proving an effective and creative source of ideas. Given that the V-Class bracing system has now found wide acceptance among players, it would seem that similar lines of exploration may yet make it into the company’s standard lines. It’s this kind of forward thinking that is widening the gap between Taylor Guitars and the competition, and it’s intriguing and exciting to see these designs incorporated into inspiring and beautiful instruments.