Looking really fabulous for the price, can this sweet 000 from Sigma’s Vintage Series deliver a quality sound to go with its excellent build quality? Review by Rick Batey. 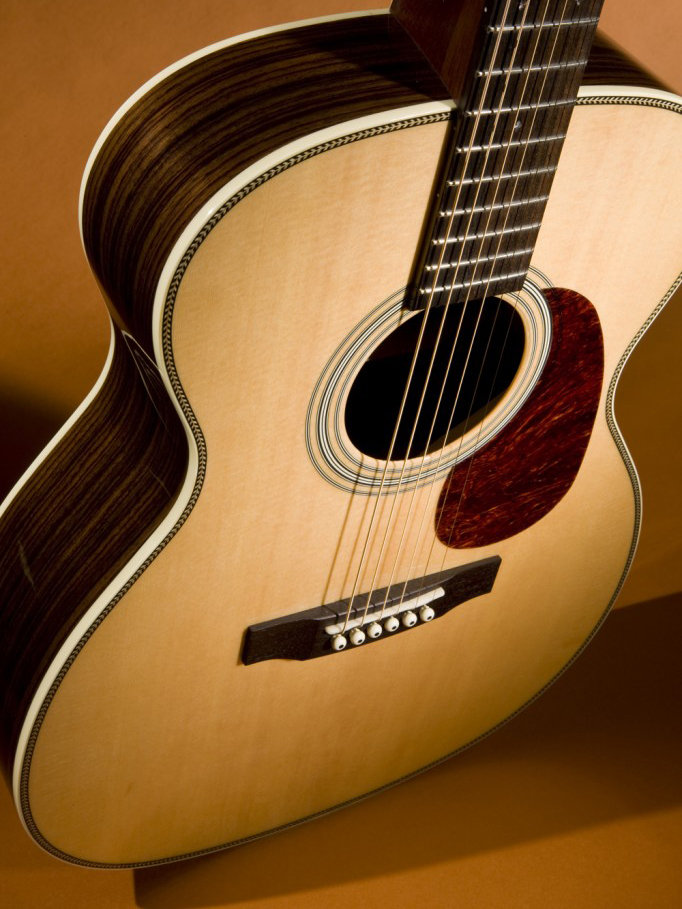 Dreadnoughts are great for power, jumbos are fab for accompaniment, parlours rule for the sofa. But if you want a guitar that can fingerpick sweetly as well as handle a pick when the chips are down, then the OM or 14-fret 000 design could be the model that hits that perfect sweet spot.

This Chinese-built Sigma is a tribute to the Martin OM with a solid spruce top and laminated rosewood back and sides. Now Sigma, as we all know, was for many years Martin’s Far Eastern-built budget brand, but in 2011 the name was picked up by a German company, AMI Musical Instruments, who relaunched the line in 2011.

Note also that Sigma’s UK distributor is Westside, who also brings in Martins – so you’ll still find the Sigma name alongside Martins in many UK stores.

AMI, by the look of it, have gone about their work with enthusiasm, spreading a whopping 69 models across nine separate series. There’s the Travel series; the basic ST Series; the 1 Series with assorted OMs and dreads with cutaway, black, sunburst and 12-string options; the 12 Series, all with cutaways and electronics; the 15 Series, which copies Martin’s all-mahogany nomenclature; the extensive Standard Series, with OMs, dreadnoughts and jumbos sprinkled with 18, 21, 28, 35, 41, 42 and 45 trim levels; a single Limited Edition adirondack/rosewood dreadnought; three acoustic basses; and finally – phew – the Vintage Series in which our 000R-28V resides.

The name might be ‘000’, but with its full-length scale the 000R-28V is modelled more closely after a Martin OM-28, a model in the early ’30s ‘orchestra model’ line which was much used by country bands. These acoustics were re-discovered by folk players of the ’60s and ’70s as an agile and expressive fingerpicking instrument, leading – eventually – to the line’s reintroduction by Martin and a whole host of other brands issuing their own versions. It’s a classic, in other words, and as nice a way as any to find out for ourselves what the ‘new Sigma’ Vintage Series is all about.

The 28V’s body is drawn up very closely the Martin template, though the upper shoulders look subtly different: it’s perhaps not quite as flat across the top, by the neck, as the original OM body. It has a lower bout span of 15″, a maximum rim depth of 105mm and a 645mm/25.4″ scale fingerboard. The top is solid spruce, fine-grained and cut on the quarter, dappled with medullary rays towards the edges and streaked with short, ultra-fine brown lines that add character and texture to the look. The back and sides are laminated Indian rosewood, straight and streaky-grained on the sides with a nice greyish-brown shade, and slightly less streaky with a richer tone on the back; not an exact colour match, then, but remember the price. The finish is gloss all over, but satin on the neck: good choice.

Trim-wise the 28V knocks it out of the park, starting with ivoroid binding of an attractive vintage yellow shade… far more appealing than bare white. Inside that is thick herringbone binding, and there are black/off-white rings around the soundhole. On the back there’s a three-layer purfling strip inside the binding, while the backstrip is a cool chequerboard pattern made up of zig-zag blocks of herringbone. The scratchplate is a swirly piece of imitation tortoiseshell, while the cream bridgepins have black dots.

The neck, complete with a diamond-shaped volute carved at the base of the headstock, is made of one piece of mahogany plus a stacked heel; the fingerboard is natural-coloured rosewood with subtle abalone diamond markers, plus tiny side-dots, and the headstock overlay is rosewood too. The tuners are open-backed nickel-plated Grovers, uniformly smooth in use.

Being only 1 11/16″ wide at the nut and very slim in depth the 28V’s neck isn’t going to suit everybody. The 2 1/8″ string spacing at the bridge – while quite regular for a 000-28 – might not quite be enough for most fingerstylists (the 28V is the only Vintage Series guitar with a neck this narrow: the rest – a dread and several 12-fret 00s and 000s – are all 1 3/4” at the nut with 2 3/8″ bridge spacing and a much bigger, more vee-shaped neck profile). The other thing to point out is that the fingerboard radius does feel slightly flat to us, a shade flatter than a Martin 000-28’s 16″, which slows down the playing experience somewhat.

However, the overall neck set is good, and the nut and saddle are in the ballpark although there is quite a lot of string-buzz as you move up the neck. The intonation is fine and the low, narrow vintage-size frets are well-finished and nicely polished.

Sounds
Essentially, pretty impressive. Though bright and new, the first impression is that this 000R-28V is promisingly loud. Tonally it’s decent too, although the bottom E isn’t quite as strong as we’d like. Still, there’s a sense of some depth and complexity which lifts this guitar above the nasal, cookie-cutter sound of many lesser-priced imports. It isn’t that elusive handmade-sounding OM at a quarter of the price, but the mids are forward and expressive, while the plain strings stay full up the fingerboard. It’s hard to avoid some boxiness on anything but really good all-solid wood OMs, but fingerpicked capo work sounds great and it’s generally a guitar that works well with fingers and with pick.

Verdict
The 000R-28V is light, authentically specced and very nicely appointed. Alongside a real 000-28 the tonal difference will be clear, but for this price? Zero quibbles. This is a very nice guitar for the money – exactly what Sigmas have been since the ’70s. Seems like the name is still in safe hands. 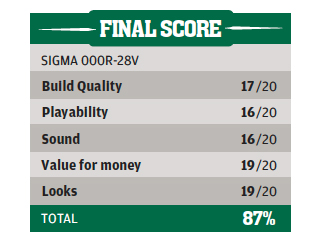