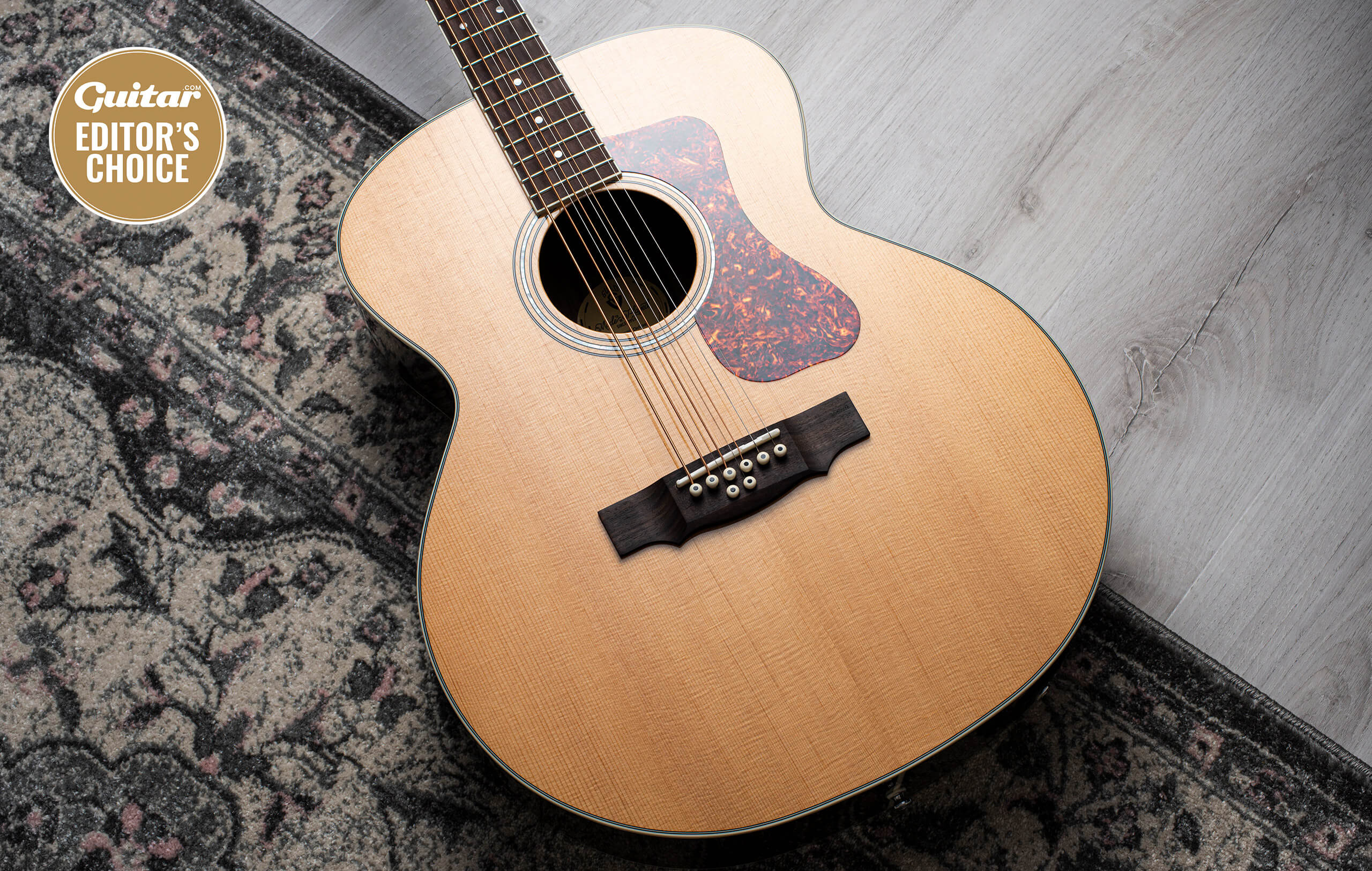 Combining a jumbo body with a 27-inch scale length and eight strings, this affordable new model promises to be something of a cannon.

For 2021, acoustic grand marque Guild has added a pair of baritones to its affordable California-designed and Asia-made Westerly Collection. Both are based around Guild’s much-loved jumbo body which debuted on the F-50 back in 1954, with the BT-240E a six-string tuned B-to-B and our review guitar, the BT-258E, taking things a little further into the realm of the recherché with octave pairs on the third and fourth strings. And why not?

The 8-string baritone (tuned 5 steps below standard) has been around for a few years now. The design can probably be attributed to Taylor’s Baritone-8 but even that model had its roots in 1960s acoustic guitar conversions by players such as Roy Connors of The Highwaymen and Roger McGuinn of The Byrds. 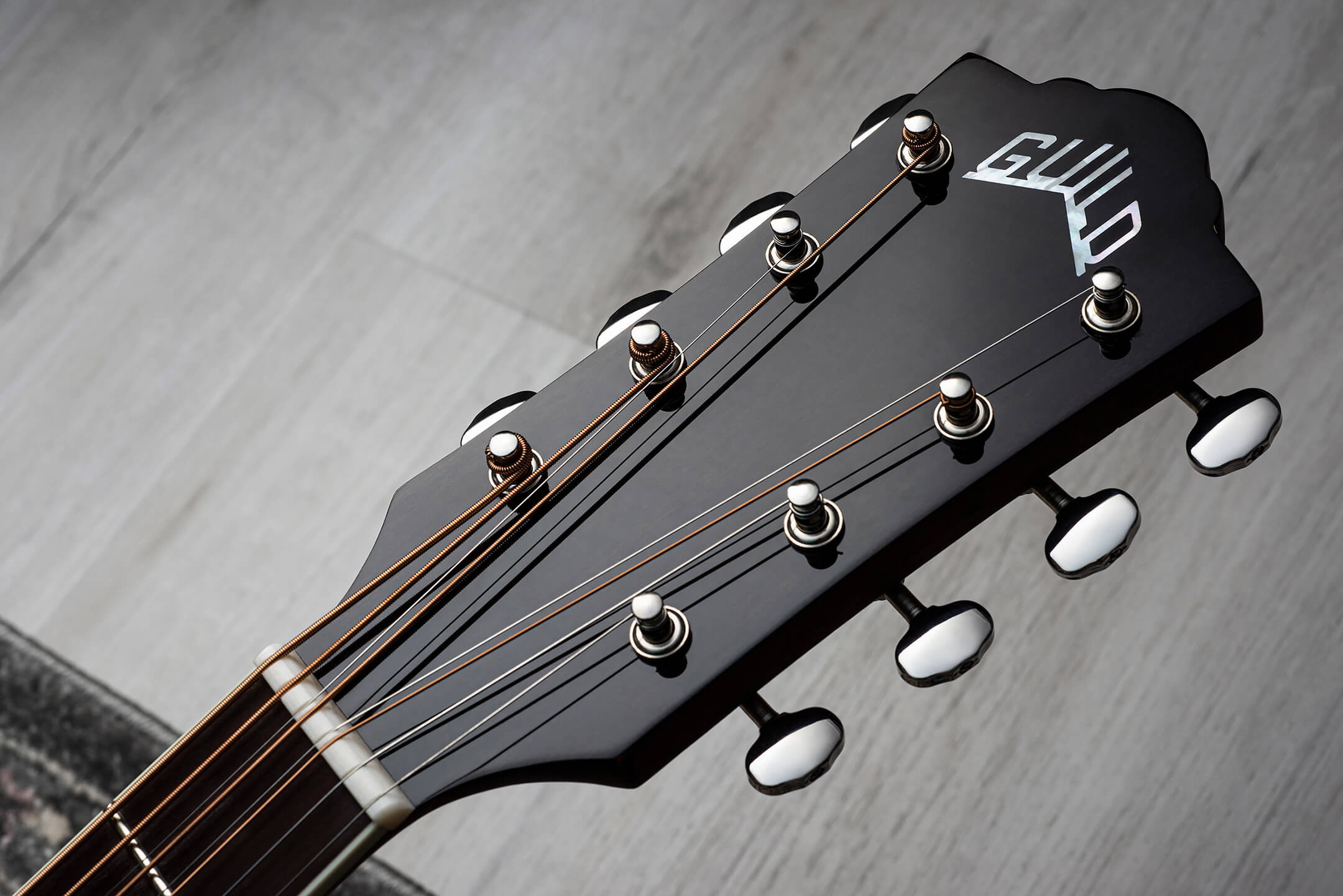 The Guild BT-258E’s jumbo body features straight grained, laminated Indian rosewood on its back and sides with the guitar’s curved back made using Guild’s long-standing pressing process, which gives it more of an archtop feel against the player’s body. We’ve seen the same approach on Guild 12-strings in the past with great results so it will be interesting to find out how it works with the rumble of a baritone.

The X-braced solid Sitka spruce top is lively with a responsive sweet spot behind the pau ferro bridge hinting at good things to come. When viewed close up, it’s not the most beautiful set of spruce we’ve seen, but at this price point we are far more interested in sound and feel than nitpicking over cosmetics. 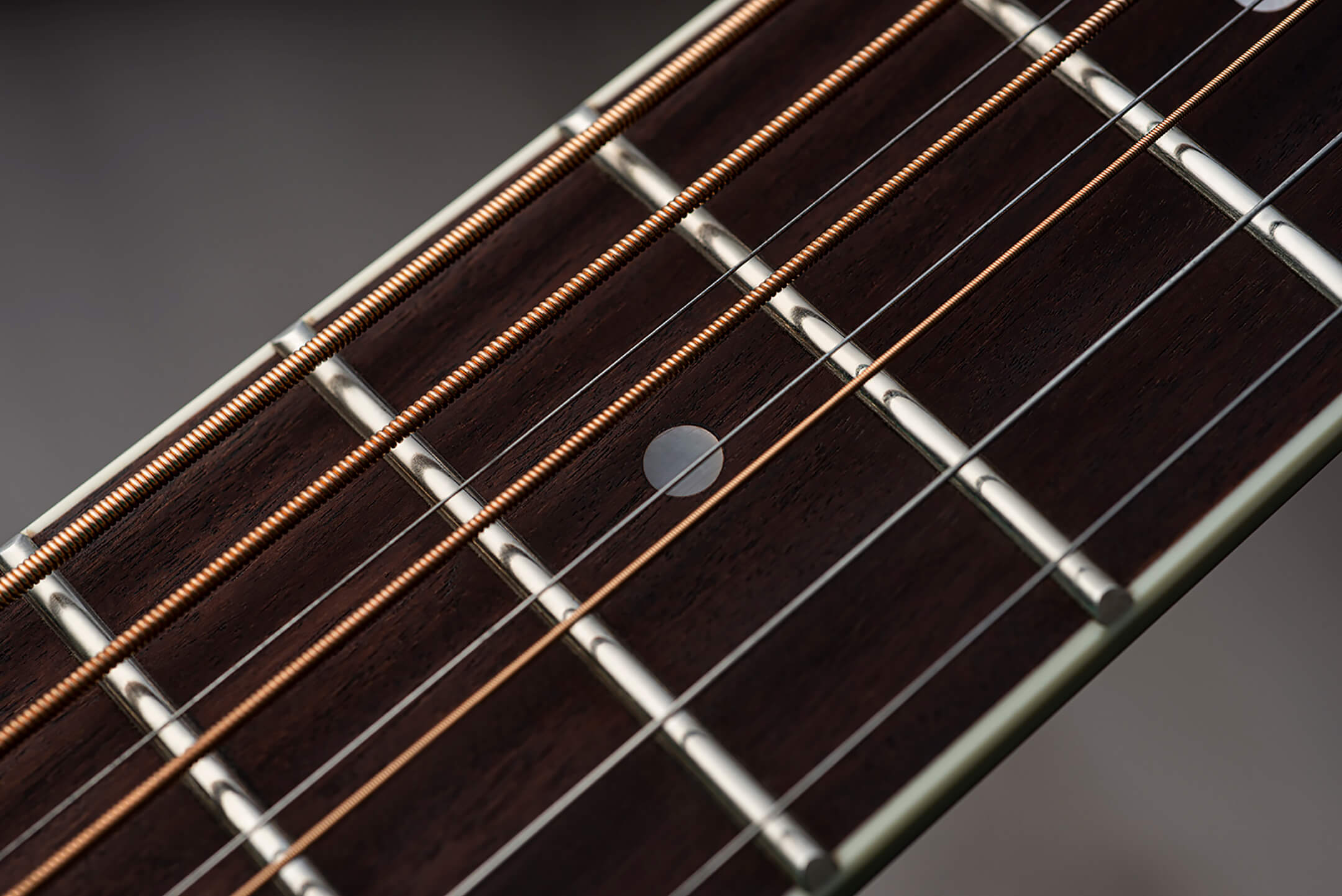 With its 27-inch scale length and 17-inch lower bout, there’s no denying that this is a large guitar which could prove an ergonomic challenge to some players, especially when you factor in the 0.016-0.070 undersea telephone cables it comes strung with. However, the slim nut width and friendly C carve of the mahogany neck promise a relatively gentle ride for the fretting hand.

The binding and fretwork on the pau ferro fingerboard are impressively clean and the bone nut and compensated saddle are well cut. Along with the smooth 16:1 Butterbean open tuners, this means that wrestling the beast to pitch is a smooth and painless process. There is an off-centre mounted strap button on the neck heel to ensure balance and the guitar comes ready to rock (gently) with an active Guild/Fishman Sonitone GT-1 pickup system, which includes unobtrusive volume and tone controls in the soundhole-mounted preamp. 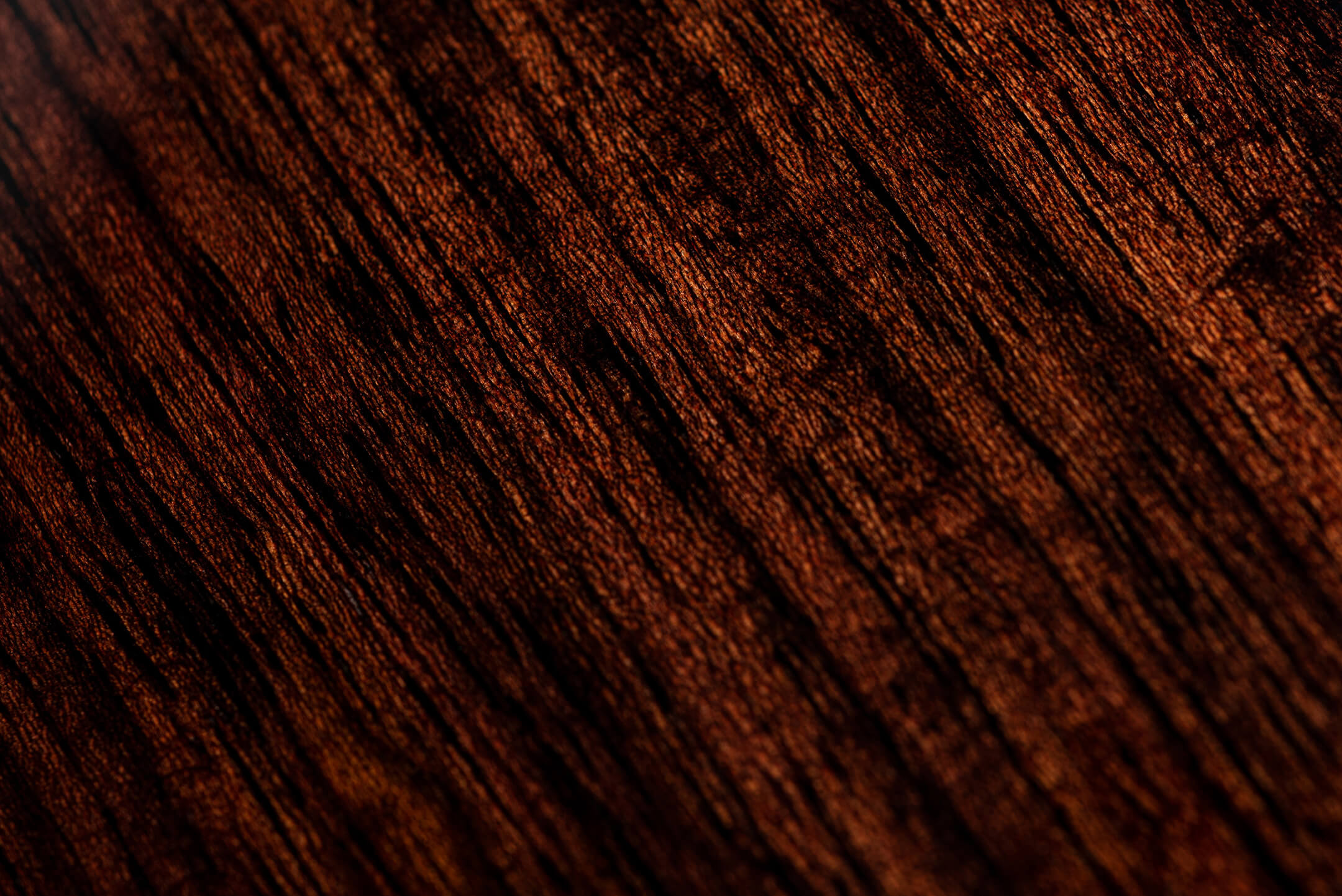 Given the often unwieldy nature of acoustic baritone guitars and their bass-heavy frequency spectrum, the approach demanded from the player often needs adjustment to prevent sensitively played chords from turning into mush. In this case even more more attention to chord shapes is warranted, with the octave pairs on the third and fourth strings encouraging the sort of voicings most commonly associated with 12-string antics.

“the pickup system proves a boon. adding delay, tremolo and reverb to a baritone is about as much fun as anyone is legally allowed to have”

While it is possible to wring out some rattling American primitivism or Delta blues textures, this is not the guitar for a nuanced fingerpicking approach. Strings of this weight need a powerful attack to drive them and some distance from the fretboard in which to move effectively and, in conjunction with the longer scale length, even with our battle-hardened calluses, it can be tough going. 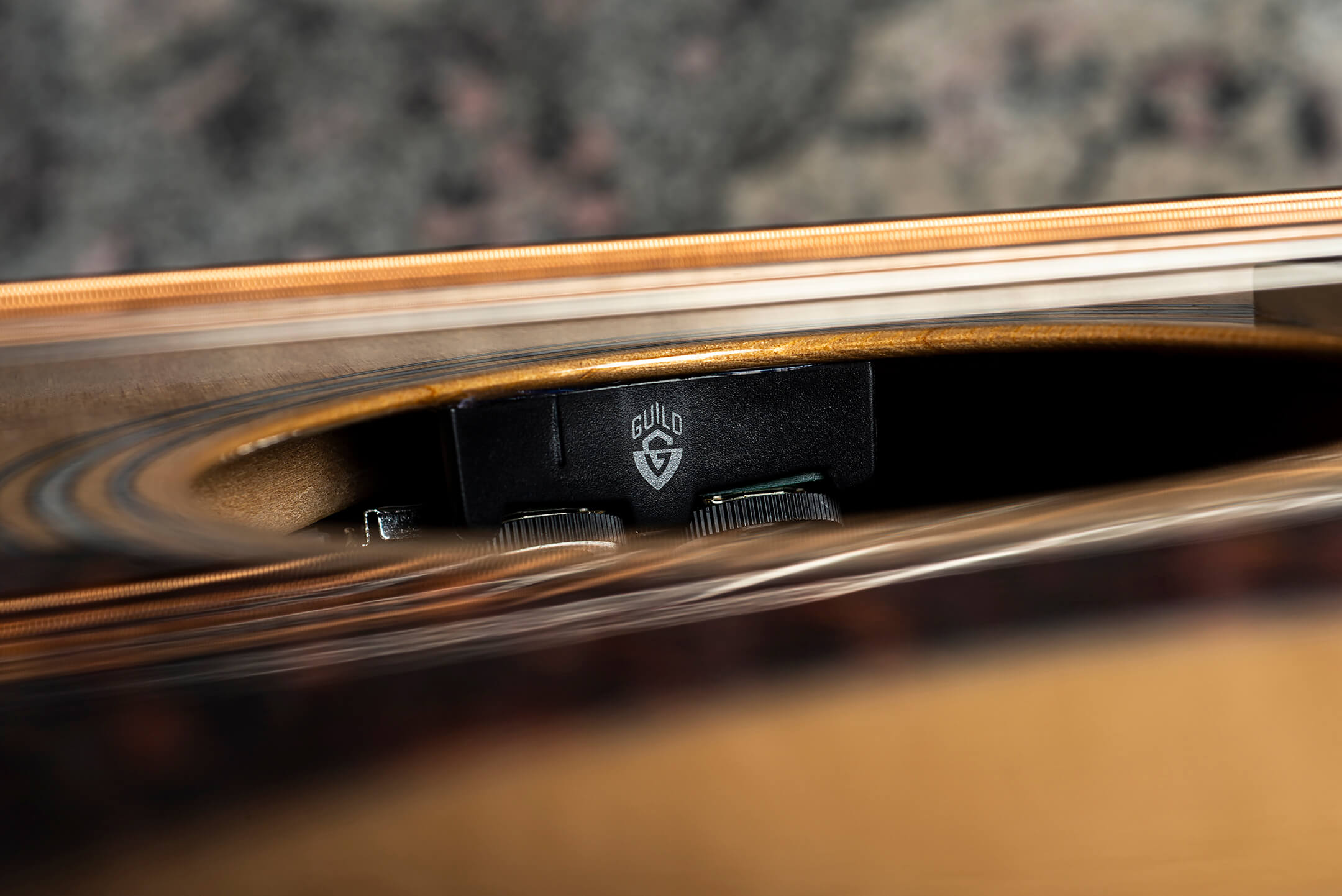 That said, it’s no more challenging than some other baritone guitars, 12-strings and mandocellos we have grappled with in the search for tonal goodness over the years. Life at these depths demands a strong grip and fingertips of steel, even when supported by the reliable and impressively accurate Fishman pickup system.

However, the pickup system proves a boon as adding delay, tremolo and reverb to a baritone is about as much fun as anyone is legally allowed to have. If you haven’t tried it, you should. 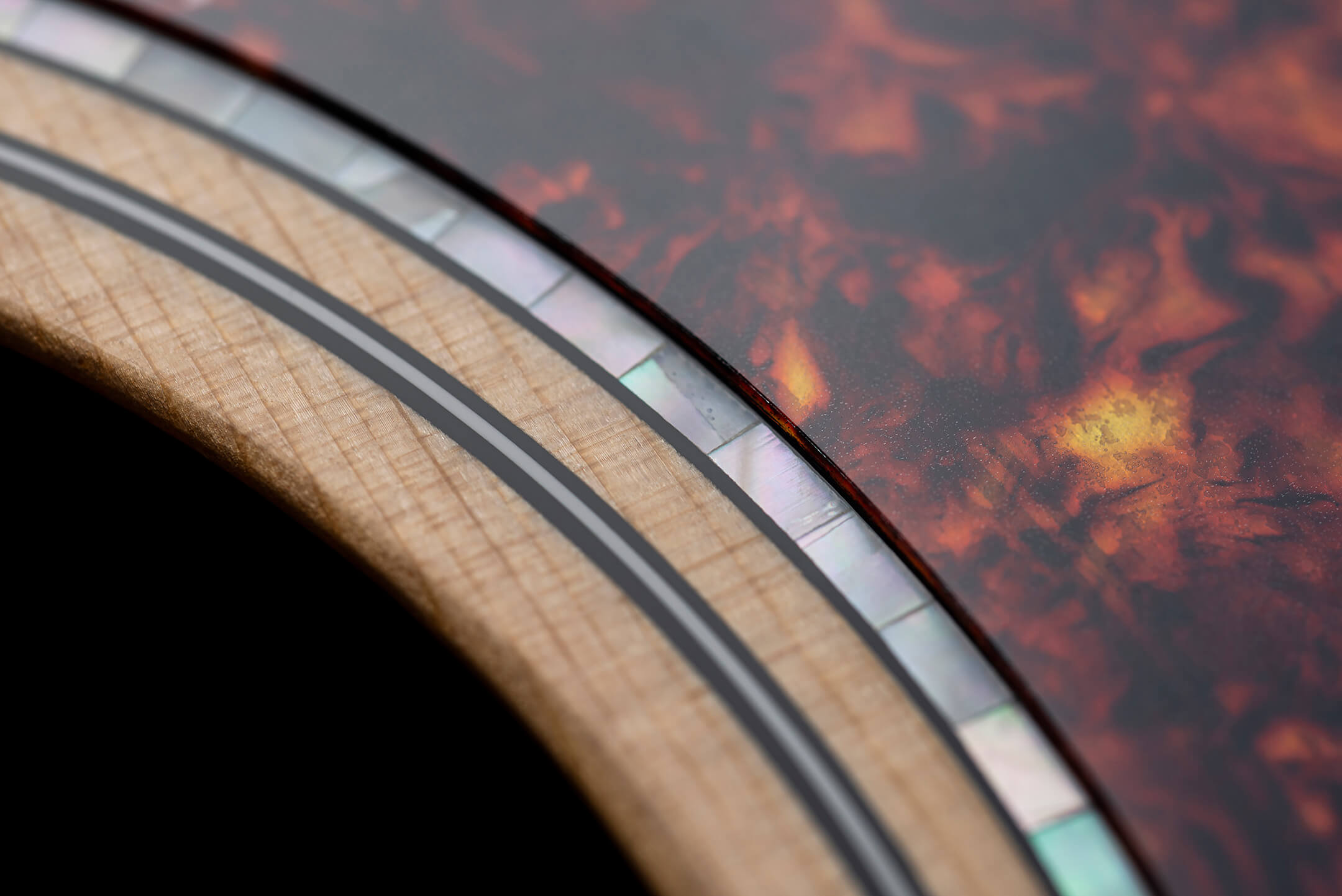 Back in the acoustic realm, more time spent with this guitar confirms our initial suspicions that this is an instrument primarily for the plectrum player – the large tortoiseshell pickguard should have been a giveaway, really – and adapting our approach to include a medium-gauge pick brings the guitar to growling life with a rhinocerene bass response that rattles the ribs and brings a huge smile to our face. The shimmering octave textures as we move open chord shapes up and down the neck are also highly musical, and even mundane cowboy chords are so much more interesting when translated to this register and supplemented by the added 12-string-style harmonic sheen from the octave strings. 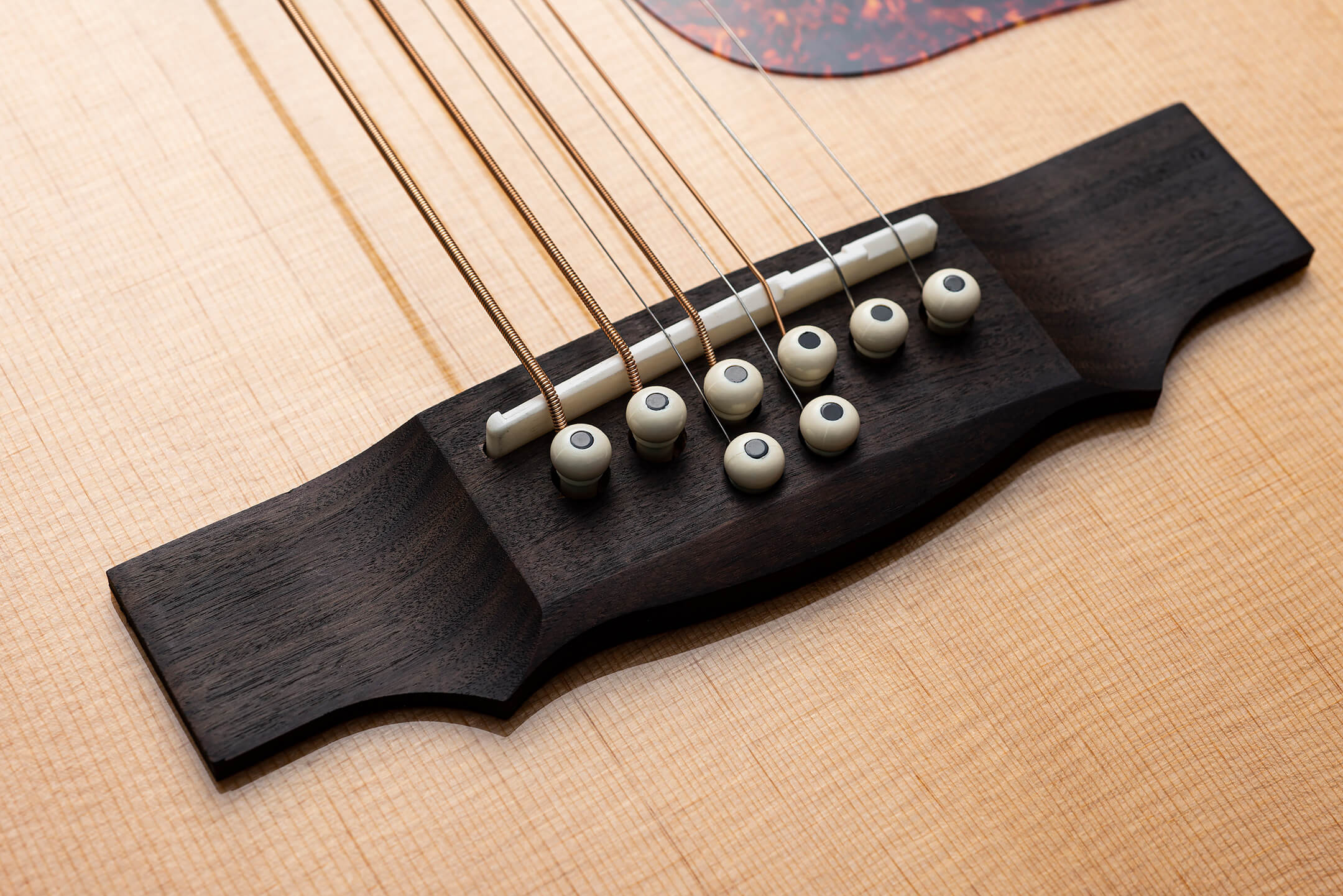 Without support from an amplifier, the bass strings can get a little flabby, but you can bring out more articulation with a Wrecking Crew-style tic-tac approach. In a recording context, a blend of both direct and mic’d signals yields the best results for recording convincing basslines.

Perhaps unsurprisingly – and due in no small part to the necessarily high action, long scale length and string gauge – the plain first and second strings can be tough to navigate. It’s precisely why fan-fret instruments are seen as a solution by many extended-range players and luthiers as they allow you to retain the muscular bass of low-slung tunings while enjoying the benefits of more manageable scale length on the treble strings. That said, if you can get your head and hands around it, the Guild BT-258E is an apex predator in the jangle-box jungle that eats 12-string guitars whole. If you play to its strengths, there’s much to love and a deep and woody well of inspiration to be found here. 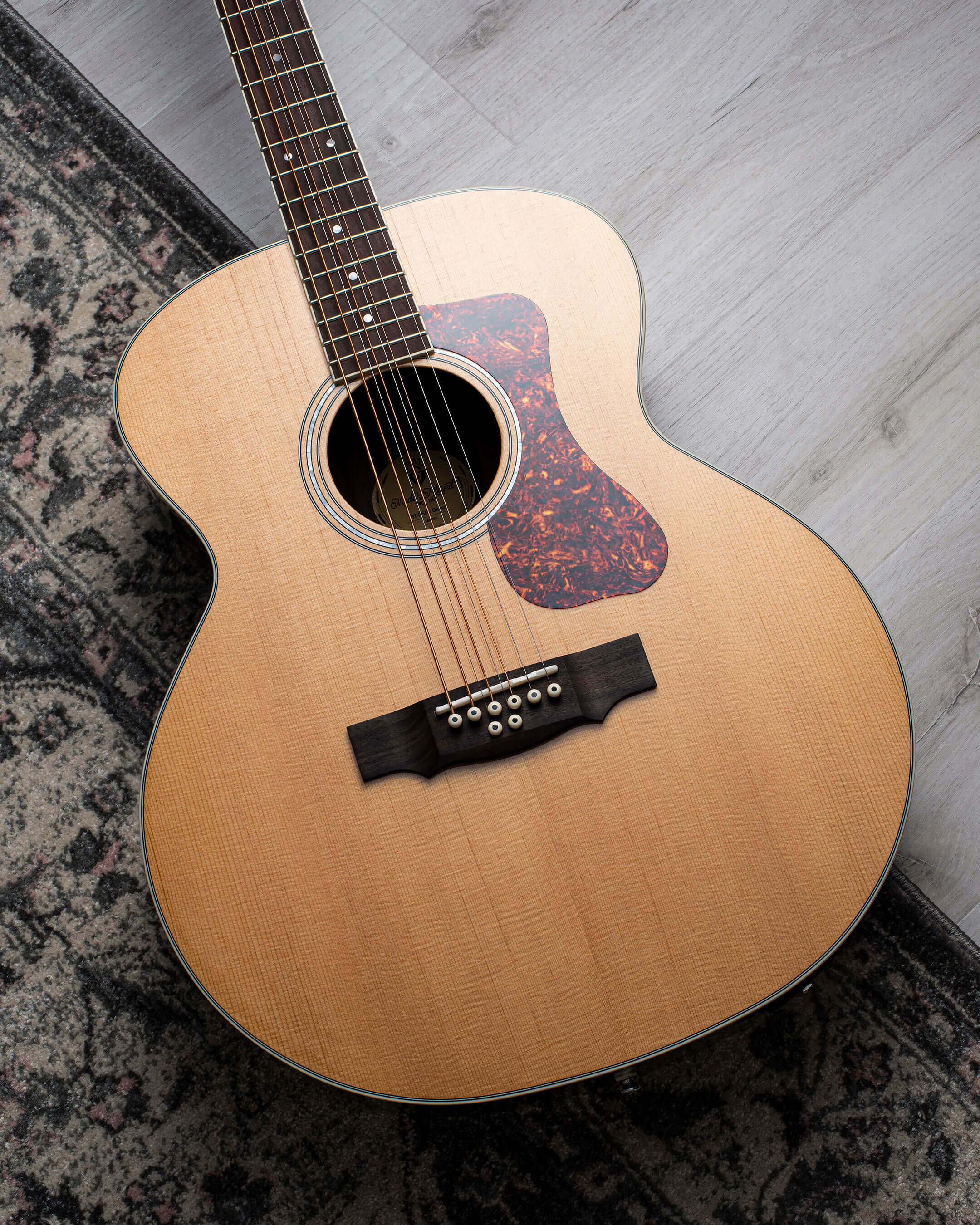