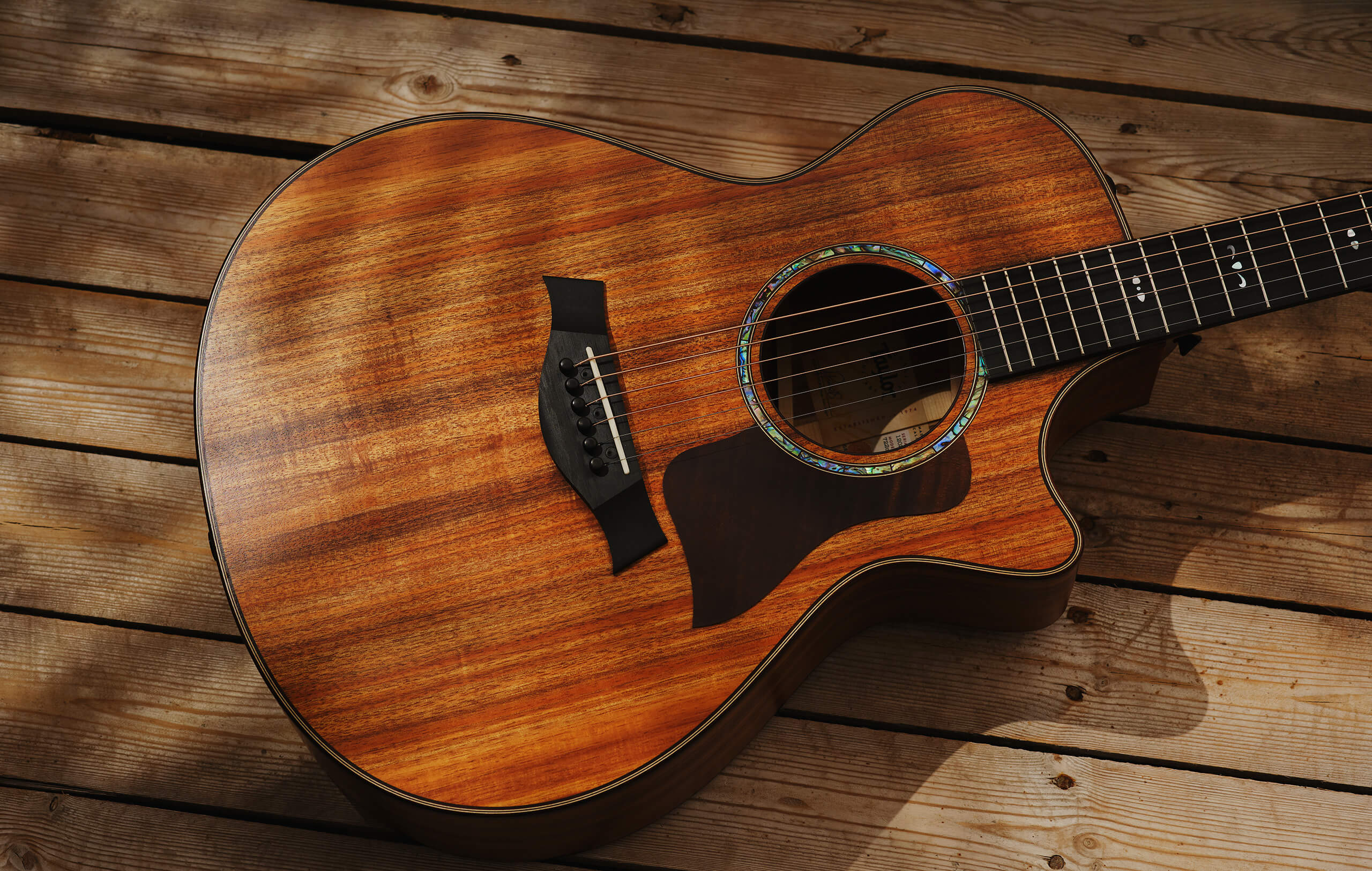 Taylor’s latest compact acoustic features sustainable all-koa construction, but does it sound as striking as it looks?

The acoustic guitar landscape is an interesting one at the moment. Large manufacturers and sole luthiers alike are responding to immediate supply-and-demand concerns, while still needing to keep up standards of responsible stewardship in the long-term use of rare and exotic tone woods. This has made for some innovate thinking.

On both counts, California’s Taylor Guitars has shown pioneering flair – and inside the deluxe hardshell case of the new 722ce, we see these themes merging in the shape of a Grand Concert made from Hawaiian koa. In fact this is not just a new guitar but part of a new Koa 700 Series – at launch there’s also a Grand Auditorium model, the 724ce. 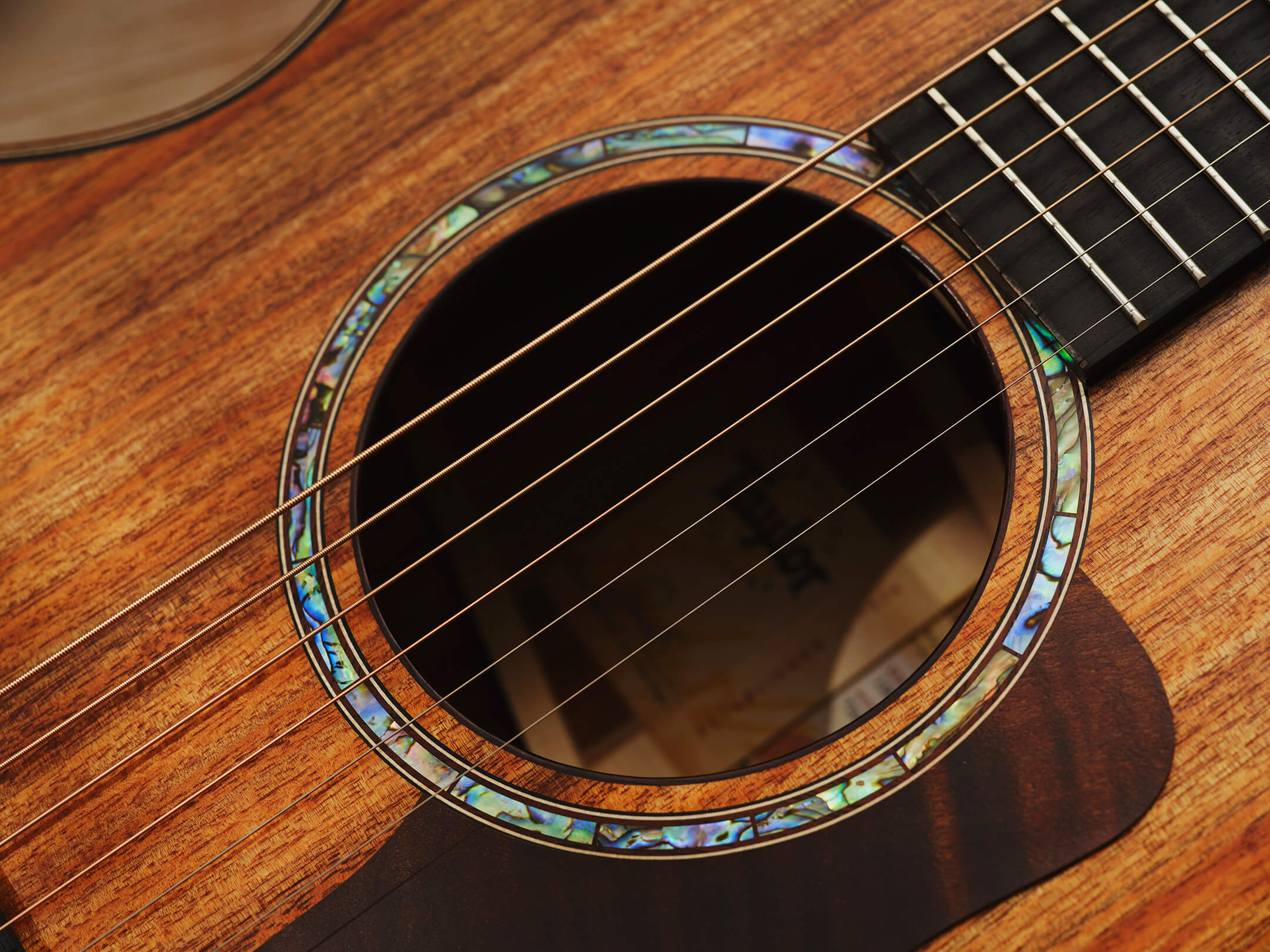 Koa has been used for steel-string guitars for at least a century; but at a time when supplies of this beautiful acacia are famously low, the idea of an entire line of guitars with full top, back and sides of the wood would ordinarily have been nothing more than a pipe dream. Enter Siglo Tonewoods – a collaboration between Taylor and Pacific Rim Tonewoods – originally founded in 2015 and dedicated to meeting demand for koa through good forest management, reforestation and innovation.

Lovers of Taylor guitars will be aware that there is an already existing all-koa line, the K Series. That’s right up at the top of the catalogue and features some of the most dramatically figured solid sets of this wood available. The new series is an opportunity for Taylor to use stocks of timber that might lack some of that visual impact but none of the musical potential.

There is a school of luthier thought – Taylor’s Master Builder (and now CEO) Andy Powers being a vocal member – that sometimes clock-stopping visuals are not a guarantee of sonic quality, and this has often been our experience over the years. Having said that, the back and sides of this instrument are still pretty alluring, with dark stripes rather than the crushed velvet chatoyance of AAAA+ sets. 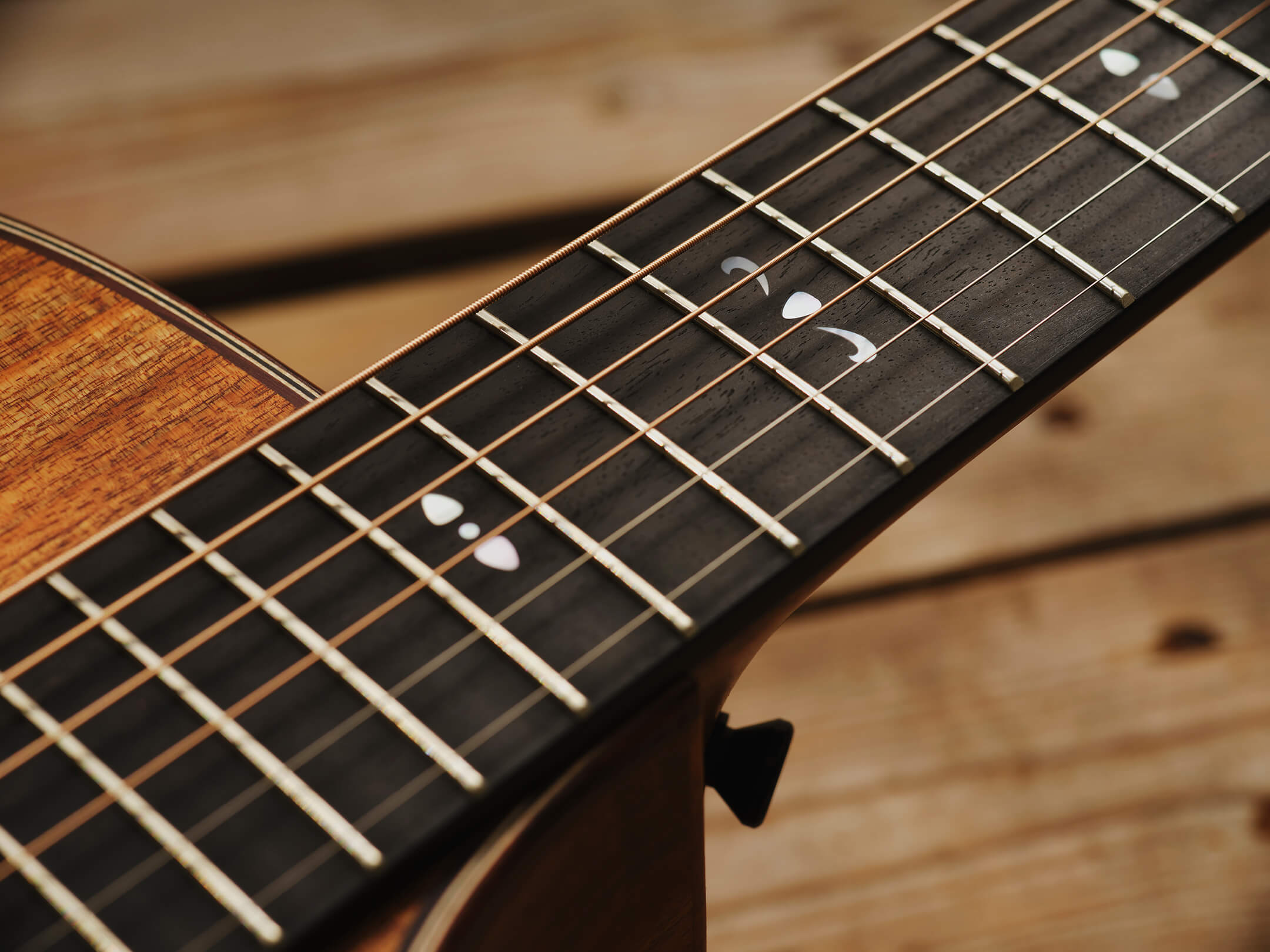 The Koa 700 Series offers several new aesthetic twists, perhaps the most important being an ultra-thin matt finish that leaves the wood looking almost raw. Fans of a textured finish will enjoy the more tactile experience. There’s no additional staining either, which we appreciate: Taylor has really let the natural beauty of the wood do the talking here.

Still, there are some attractive new flourishes in the form of rosewood bindings, the new ‘fountain’ inlay scheme executed in mother of pearl, a single segmented ring of paua rosette, a dark-stained maple scratchplate, and polished bronze tuners. Overall the look is a delicate balance of sumptuous earthiness and modern elegance. 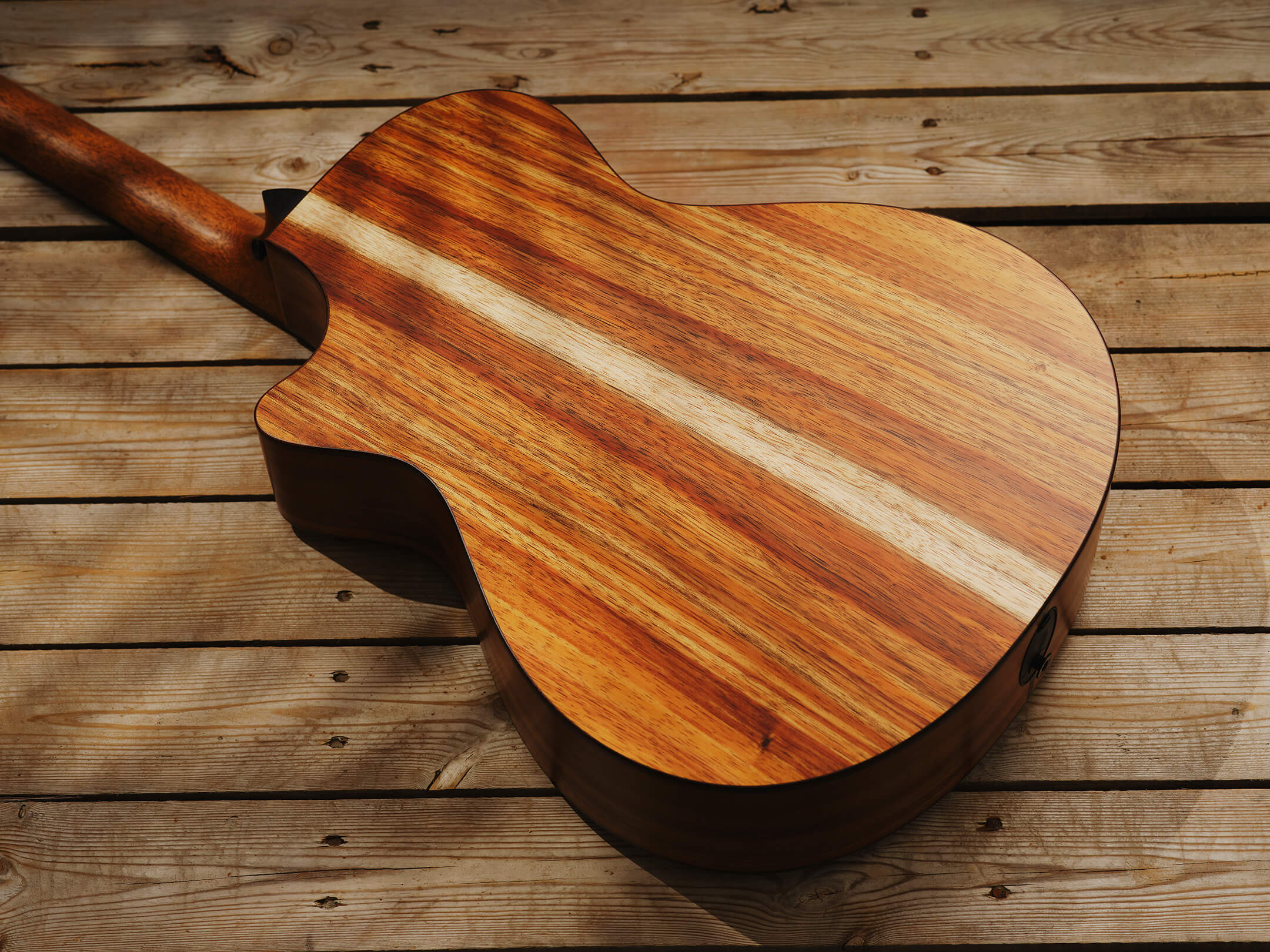 Since its debut in 1984, Taylor’s Grand Concert model has won over many players with its reputation for clarity and detail in the treble and an articulate bass response, especially when backed with rosewood or maple. This has made the design a favourite among fingerstyle players of many different genres – so good things are expected.

And guess what: good things are exactly what we experience with our first open chords on the 722ce. Part of the 700 Series’ approach to tonal goodness involves slightly altered back bracing for a more open and immediate sound, and our first exploratory chords do back this up.

All-koa guitars are often compared to all-mahogany guitars but with an extra sizzle in the top end and a gentle mid-range scoop, which elevates them from bluesy robustness to something more refined. These characteristics are certainly on display here, but there is a subtly different voice to other koa Taylors we’ve tried over the years. It could be the back bracing, it could be the ultra-thin finish or the slightly shorter 24⅞” scale length, but the guitar immediately sounds and feels more open. 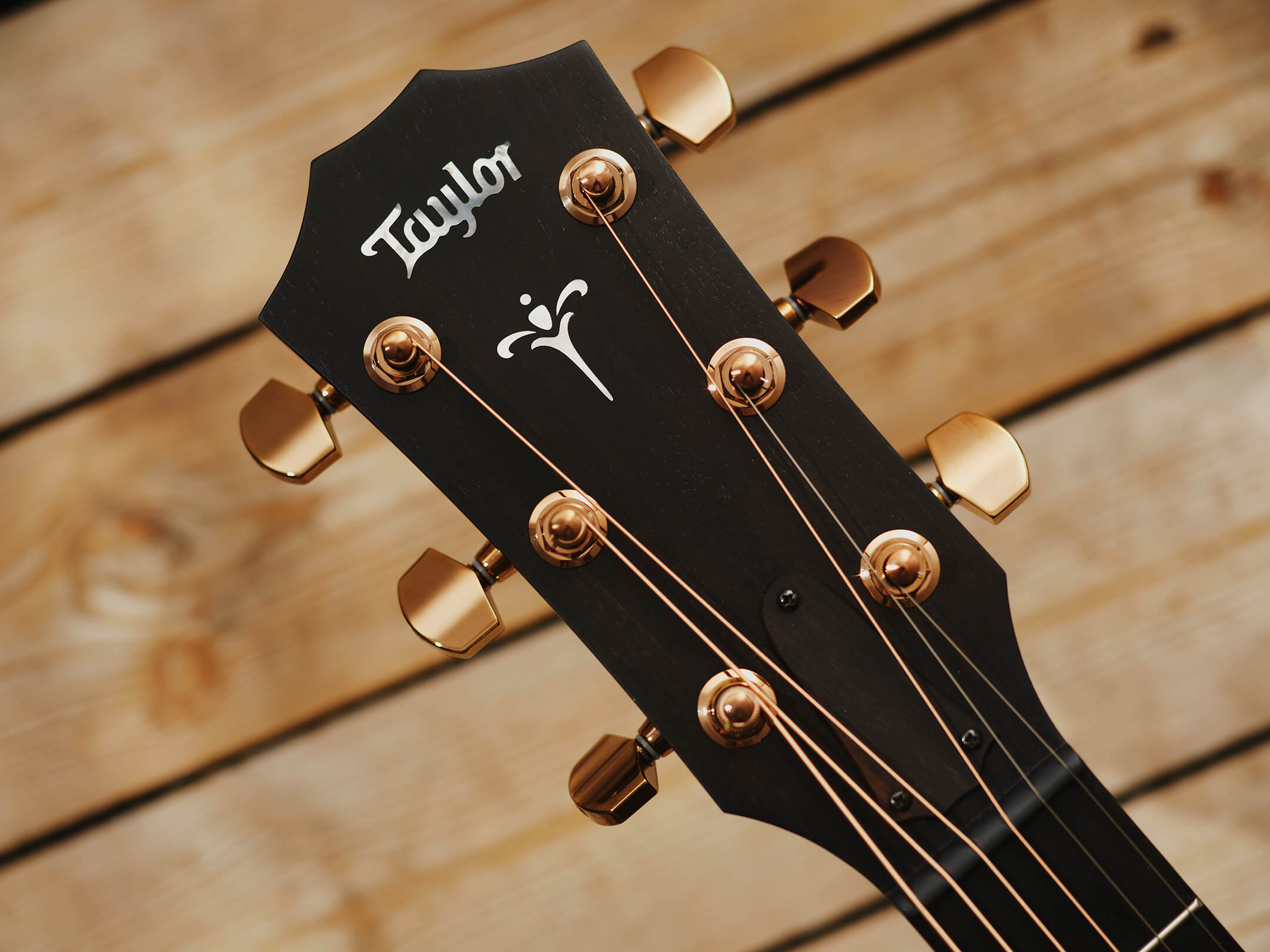 Some sort of strange alchemy often occurs in a guitar made with top, back and sides of the same wood and this one is no exception. The sonic range is very well balanced, the voice remains smooth and articulate throughout and there’s an element of natural compression that works beautifully on both fingerstyle and strumming in standard tuning. This all makes for an expressive instrument – time to see what it can do in alternate tunings.

Playing an acoustic guitar in DADGAD for the first time can be a revealing exercise, as the amount of sympathetic resonance coming from the open strings can often throw up little idiosyncrasies. While the drop into this tuning goes without a hitch due to the well-cut nut and smooth tuners, we do find a couple of clashes in extended chords where the notes seem to be fighting each other. Aside from that, the main considerations of balance and intonation perform well. 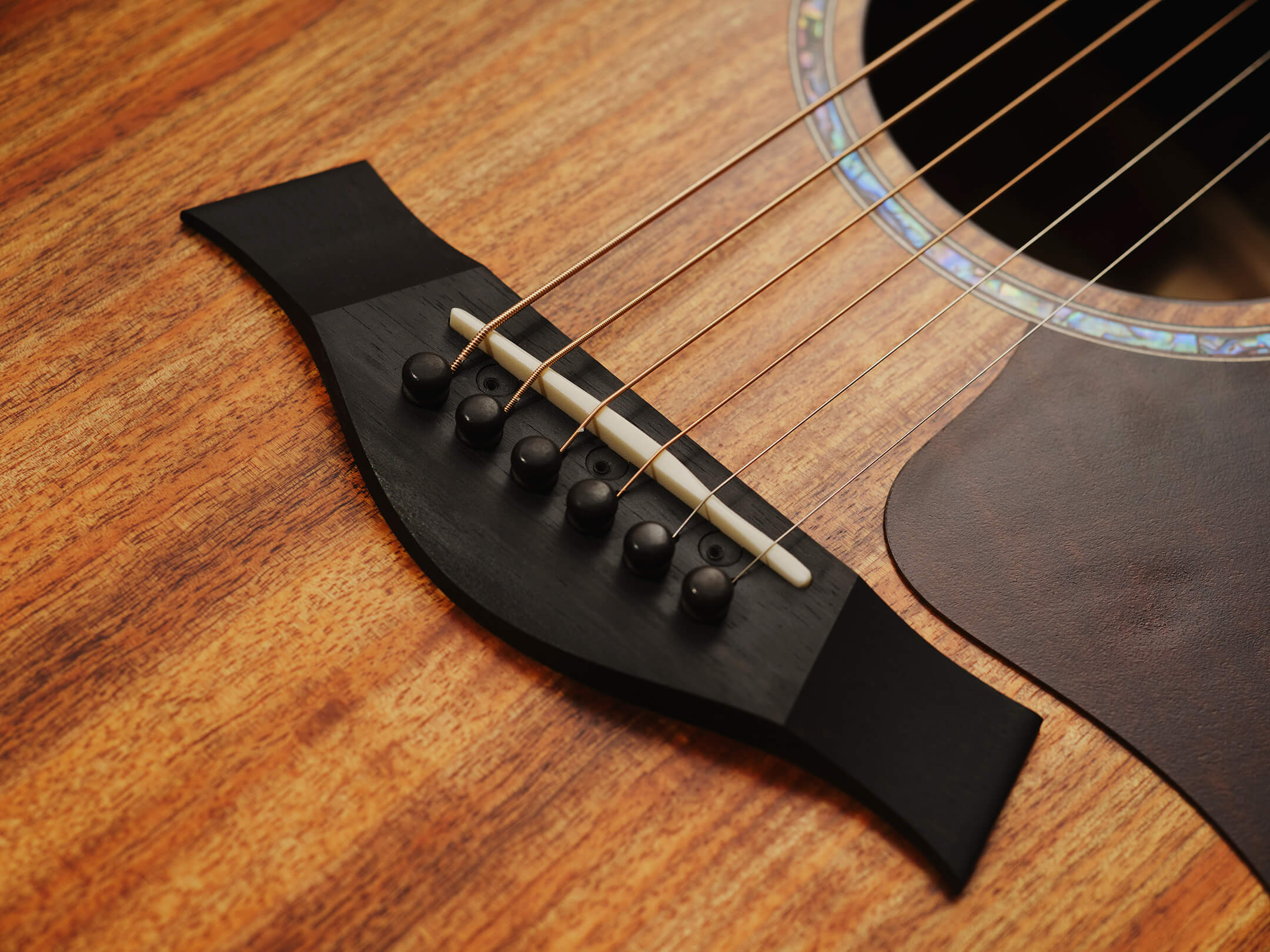 Delving deeper, we explore CGDGCD tuning with fantastic results: the instrument’s inherent sweetness works beautifully with with this low-slung approach, and the 14-fret neck ensures that the shorter scale length does not lead to any loss of articulation. Throughout our explorations the core character of the note remains responsive, with a pleasing smoothness to the attack under bare fingers, nails or a flat pick. As ever, this comes through beautifully with Taylor’s ES2 active pickup system.

Having already lost our hearts to a number of koa instruments – from original 1920s Martins to exquisite modern masterpieces such as Andy McKee’s harp guitar, created by Michael Greenfield – we’re always happy to play another acoustic made from this exquisite wood. But if anything, what our time with the 722ce really reveals is how dominant the design of a Taylor guitar can be over the materials used. Yes, its a good-looking instrument that feels organic and immediate, but that’s secondary to the fact that it’s a Taylor – and as such, that crisp and detailed house sound reigns supreme.