The Big Review: Taylor AD27e Flametop – an all-maple dreadnought that sounds strikingly unlike a Taylor

It’s all about that maple as the latest round-shouldered Grand Pacific in Taylor’s American Dream series takes the company in a bold new direction.

A new release from Taylor Guitars is always grounds for celebration, as it’s always difficult to predict what wonders the company’s design chief Andy Powers is about to unleash on a grateful acoustic-playing world.

This time, it’s a new addition to the American Dream series – itself a pandemic-inspired pivot that used Taylor’s round-shouldered Grand Pacific dreadnought-style model as the basis for a new line of instruments with a sound as earthy and organic as their open-pored finish. But the AD27e Flametop is different. 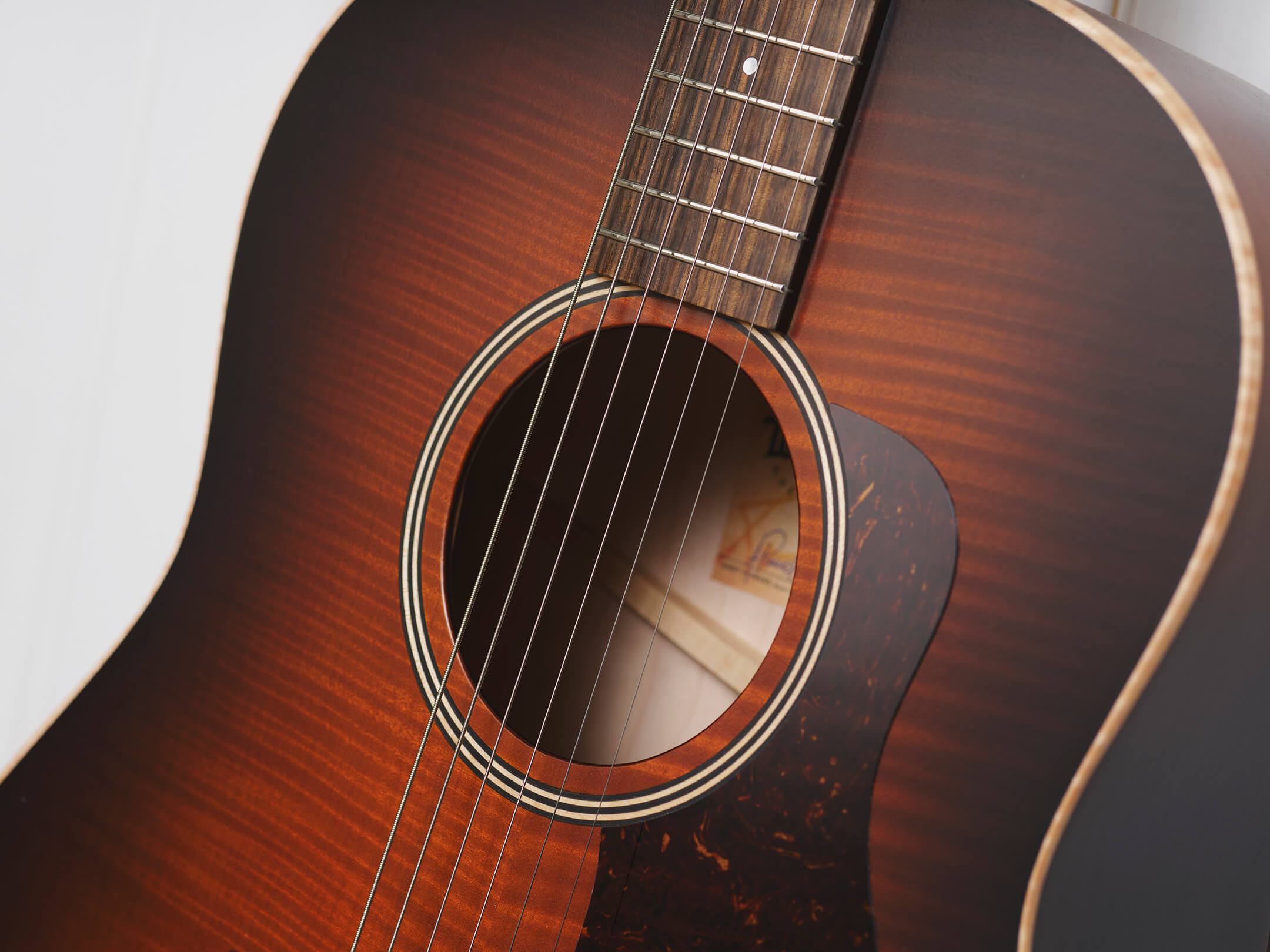 Taylor is clearly warming to its theme here, with a guitar featuring a back and sides of gently figured bigleaf maple, while the soundboard – somewhat controversially also bigleaf maple – shows the sort of flame more readily associated with a certain Mr Paul than anything containing quite this much fresh air.

While all-maple acoustic guitars are not unknown, they’re less common than other instruments constructed entirely from a single wood, with mahogany, koa and walnut all being more popular choices. Given Powers’ desire to challenge all guitar-shaped preconceptions, perhaps an all-maple guitar shouldn’t surprise anyone. If anything, we’re almost disappointed that he didn’t have the back and sides made from sitka spruce while he was at it. But there is another twist here too: this guitar was voiced for uncoated D’Addario Nickel Bronze strings. 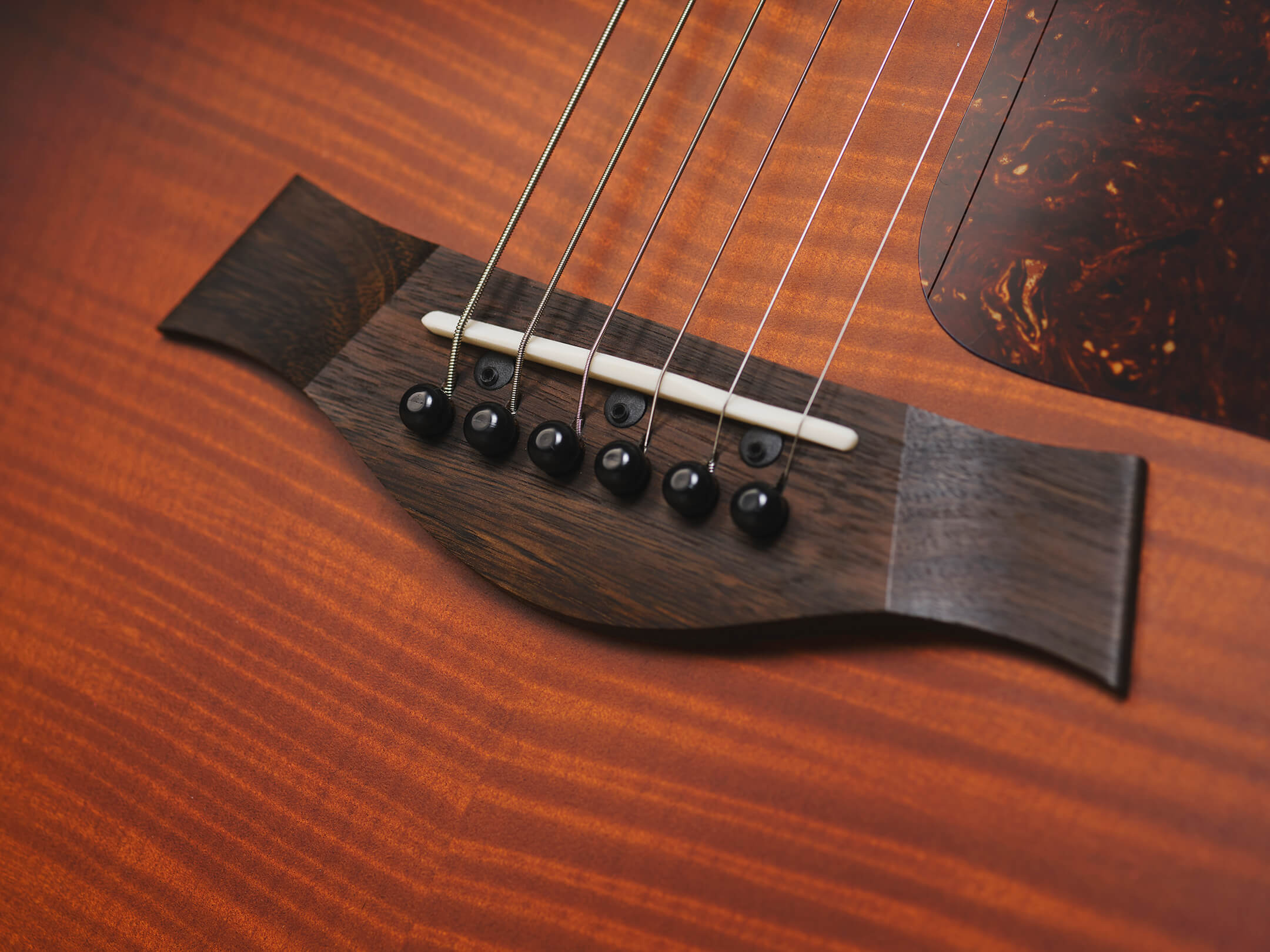 Taylor guitars have been synonymous with Elixir strings for as long as we can remember. So it’s something of a shock to see anything else here, especially when the strings in question look to the casual observer more like those found on an electric guitar.

There’s been no change made to the 25.5-inch scale length of the original Grand Pacific design, the implication being that the timbres Taylor is offering with this guitar are dependent on the choice of soundboard material and string composition alone. Intriguing.
Aside from these gentle deviations from the norm, the AD27e is typical of Taylor’s new aesthetic, with a woodsmoke sunburst finish on the body and neck, and untinted ‘fake’ front binding such as you might find on a PRS. 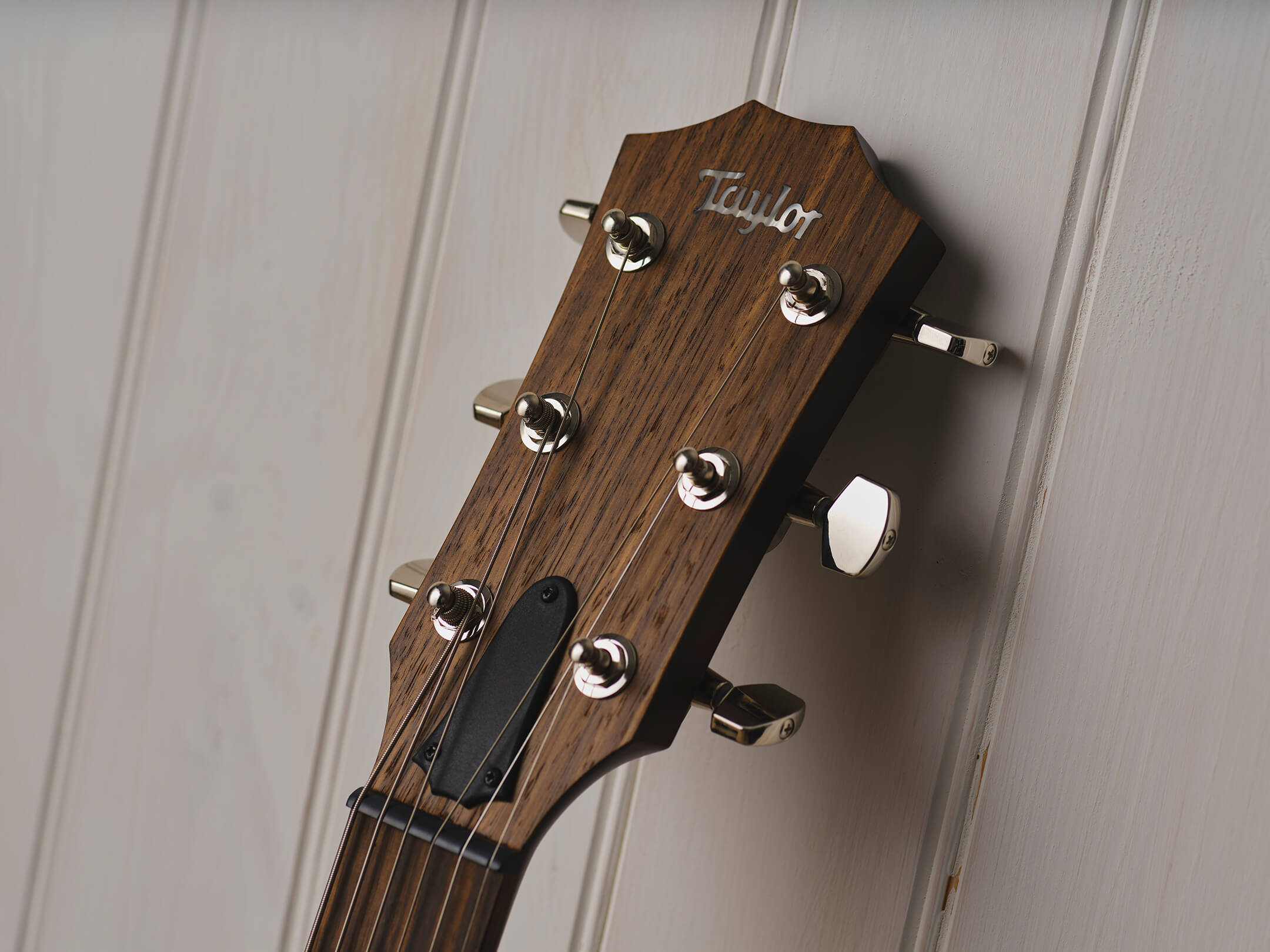 The neck is hard rock maple as opposed to bigleaf and, in the spirit of the American Dream series, there are cosmetic blemishes in the wood that either provide a poignant reminder of the impossibility of perfection in an imperfect world or look a bit rough, depending on your point of view. As jaded as we might be, we can’t bring ourselves to align fully with the latter. It is a natural material after all. 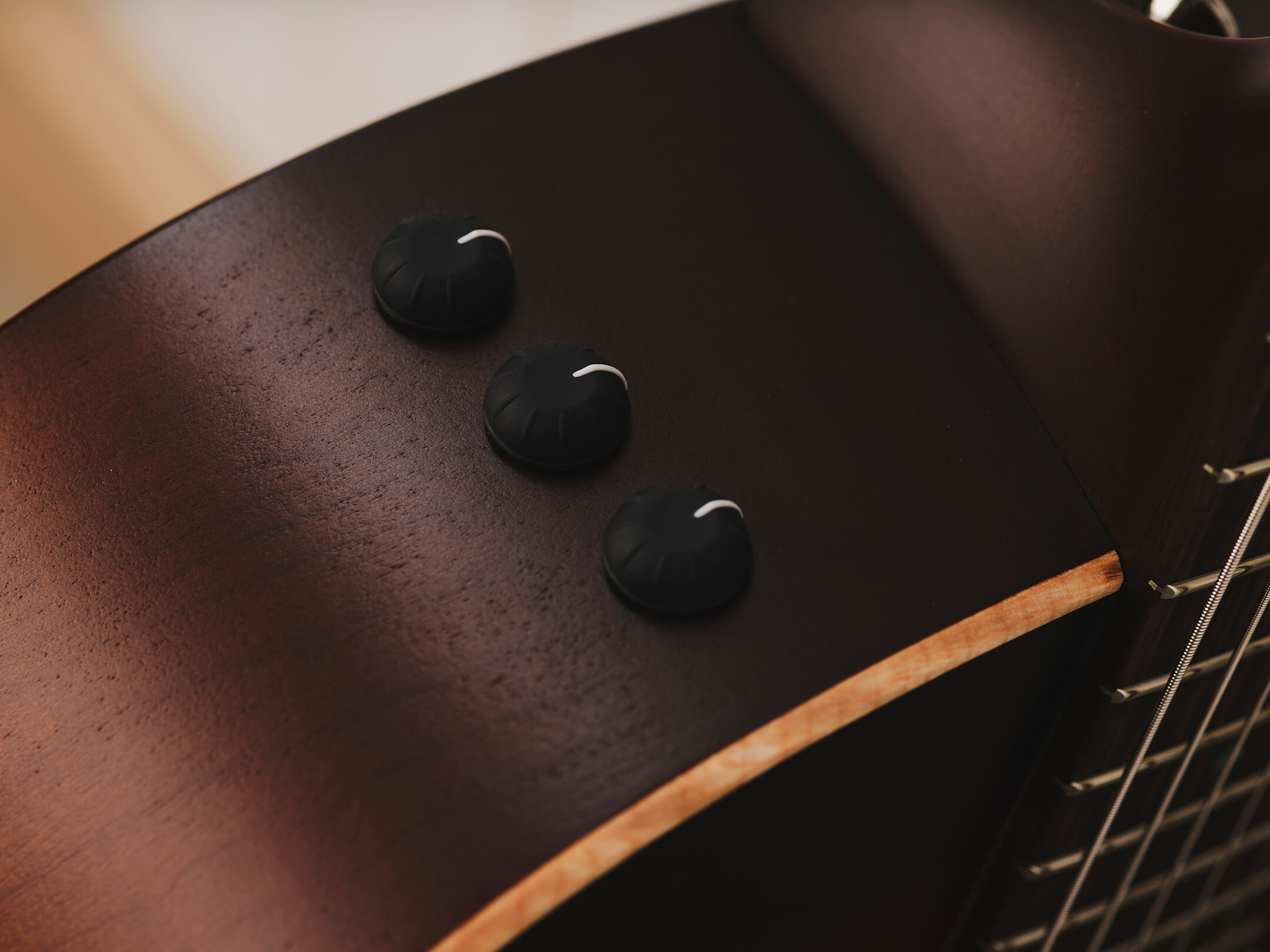 It only takes a few moments of gentle singer/songwriter fingerstyle to give us a clear indication of Taylor’s intentions with this guitar. In fact, we could believe that the phrase, ‘The exact opposite of a 1990s 614ce’ might have been daubed on the workshop wall during its R&D period.

At first, the voice of the guitar comes over a little shy – the attack/decay profile of a maple-soundboard instrument is a lot more linear than that of a guitar topped with just about anything else. There’s little bloom in volume to the note, which instead goes on its merry way, barely changing colour or character before decaying somewhat abruptly to nothing. 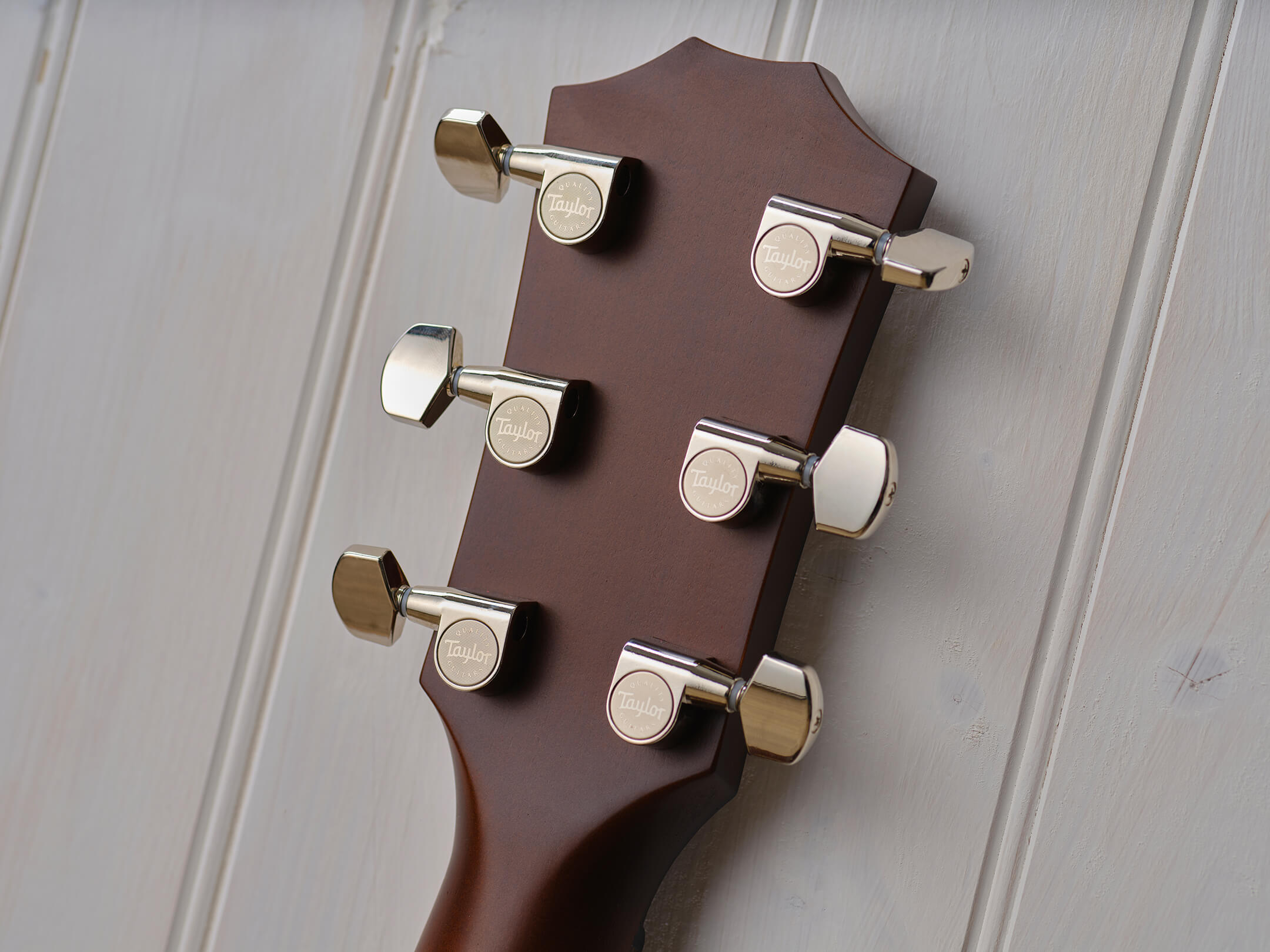 Despite this almost logarithmic response – which reminds us at times of the behaviour of an early piezo-fitted instrument – the timbre is actually very attractive. The voice is dry and woody and, because of a paucity of overtones, it cuts through with a strong fundamental.

Applying some strumming with a 1mm pick causes a dramatic shift in character: the guitar leaps as if stung and suddenly the room is full of thundering great chords with impressive sustain. This is much more like it. 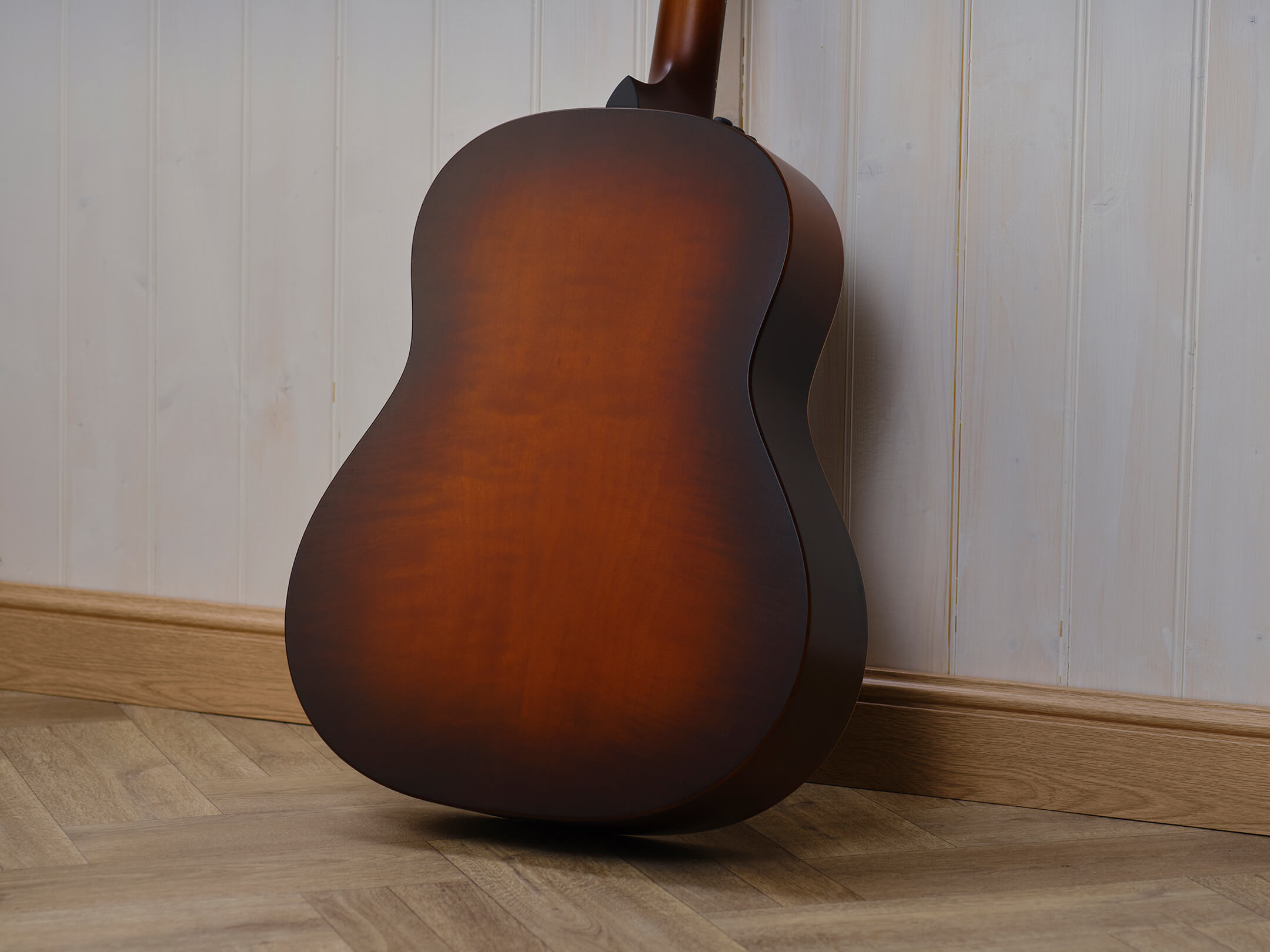 Much wrong-headed waffle has been shared both on and offline regarding the use of maple in acoustic guitars. Yes, there have been some unfortunate examples. But having performed with a maple signature model for almost a decade, this reviewer is more than aware of how extraordinary a guitar made from this beautiful wood can be in the right hands.

Maple does, however, demand a Goldilocks approach: the attack, pick weight, string gauge and any number of additional variables have to be just right if you are to reach peak performance. We see an element of this very clearly here. The contrast in voice when offered a lighter pick is immediate – the sound instantly becoming disdainfully thin and watery – but beef things up and we’re returned to terra firma. Taylor’s redoubtable ES2 pickup system does a reassuring job of smoothing things over when plugged in too. 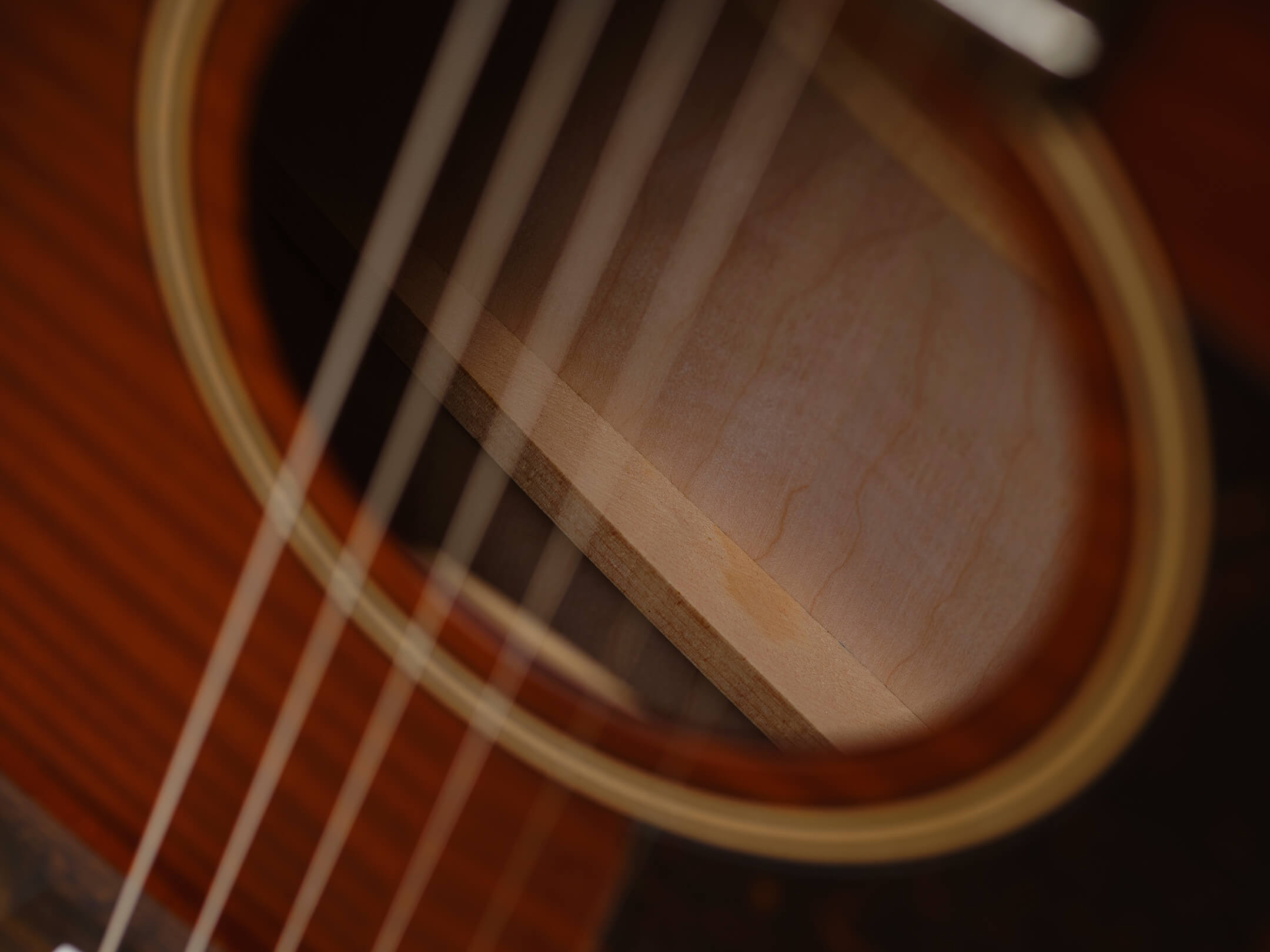 Taylor shot to prominence with a very shiny, detailed sound and an emphasis on the trebles that has made the brand a ubiquitous sight on stages and in studios around the world for decades. A welcome contrast to the slightly woolly and indistinct (all very subjective, of course) personalities of Martins and Gibsons at the time, that original house sound has also been described by lazy detractors as sterile and lacking character – accusations that can not be brought against this guitar. It is unusual. But it’s growing on us.