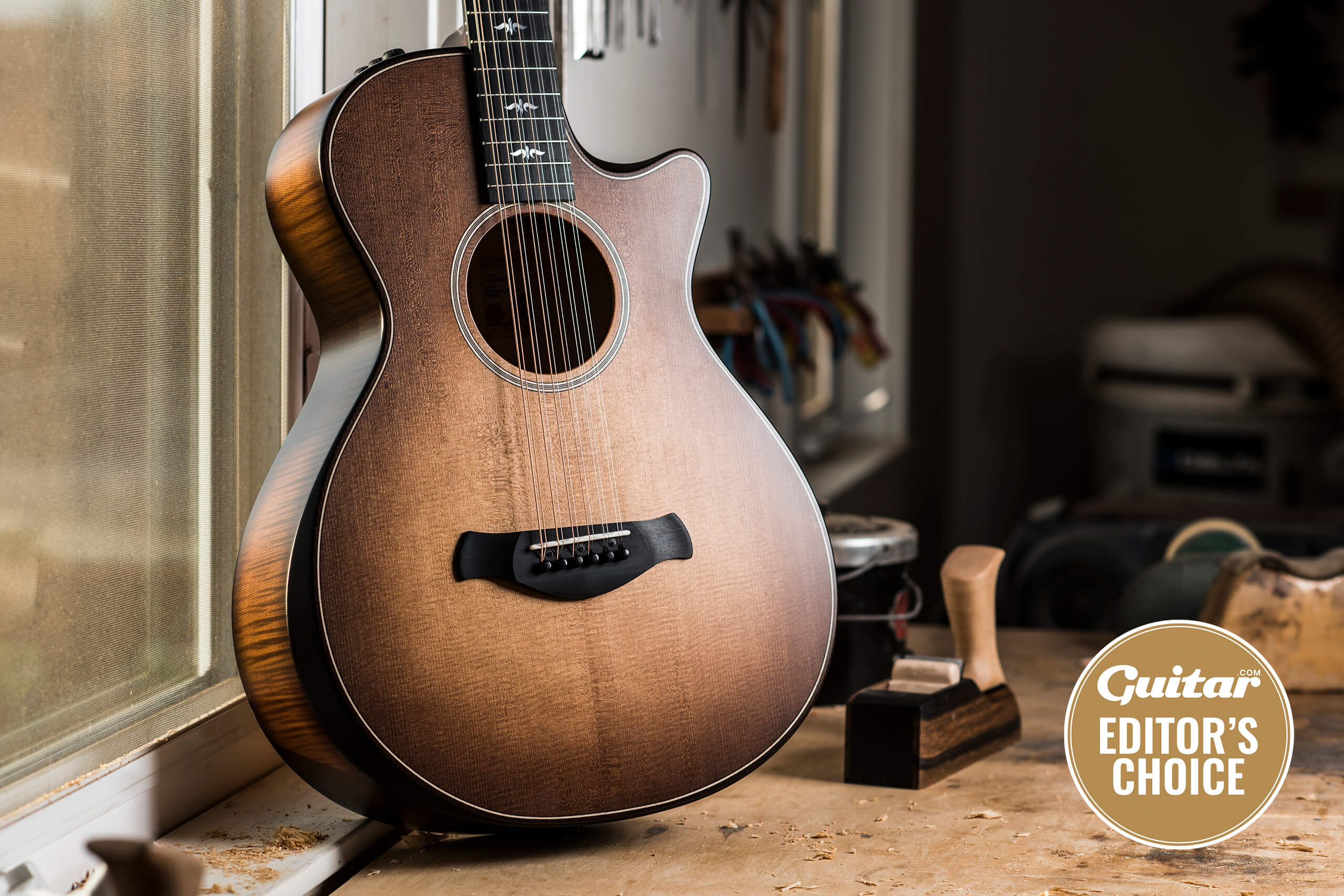 With compact dimensions, softened edges and reverse stringing, this is no ordinary 12-string.

Compared to the numerous Taylors we’ve reviewed in years gone by, this instrument provides a timely reminder of how much the Californian company’s guitars have changed. Things have mellowed considerably, but rather than dispense entirely with the elements that have been so successful, it feels liken there’s been a natural but rapid evolution.

The vibe remains contemporary but the softened look complements a refined playing feel that Taylor’s master guitar designer Andy Powers has achieved by attending to myriad fine details. Most obvious here on this Grand Concert Builder’s Edition 12-string model is the way the body edges are rounded over – a feature made possible by dispensing with plastic binding. The body isn’t actually bound at all, but the sunburst shading outside the purfling makes it appear as if it is. 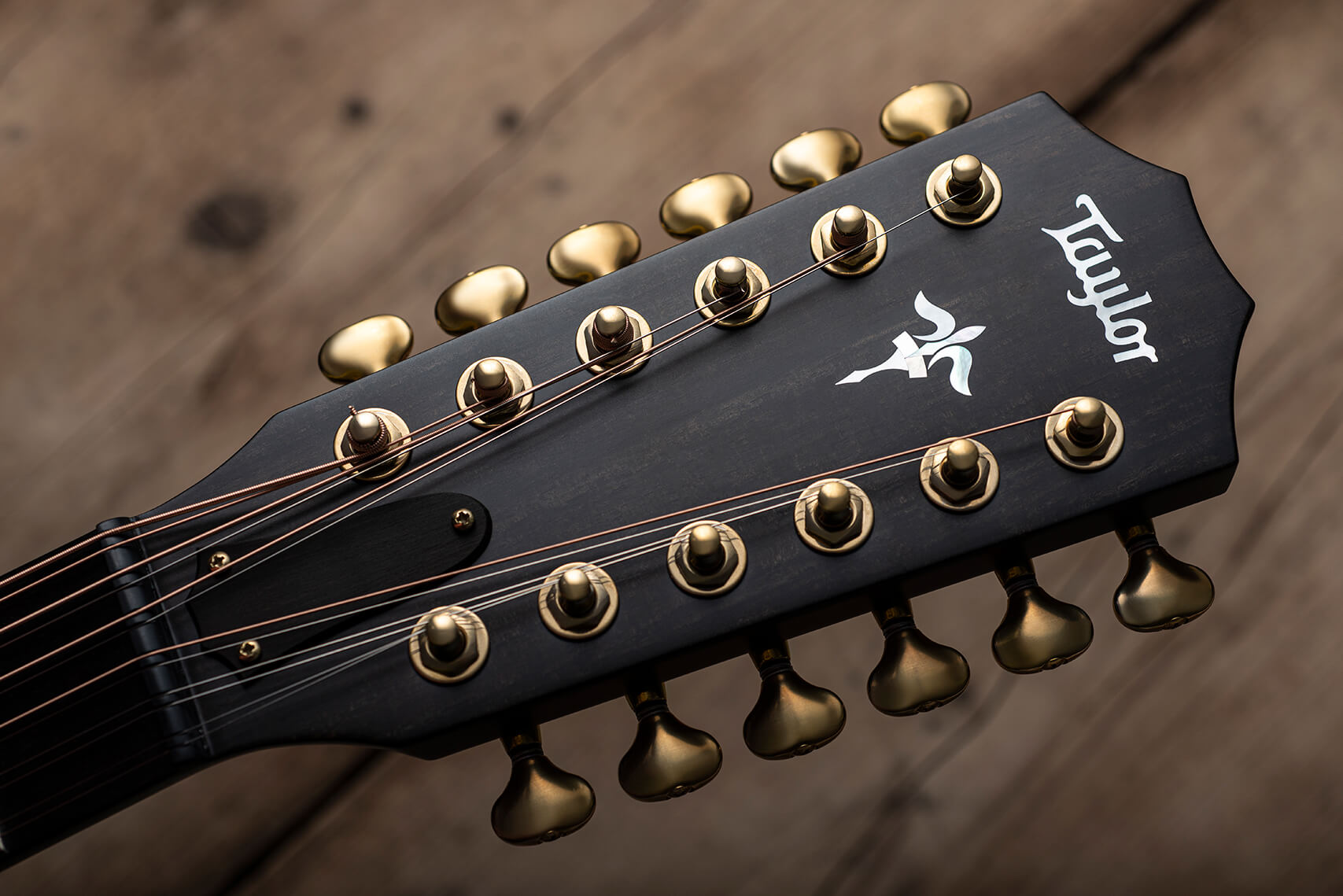 In the same spirit, the ebony fretboard edges are rolled too – a feature more commonly associated with well-played vintage guitars and boutique luthiery. Additionally, there’s a bevelled arm rest, along with a bevel in the cutaway. Combined with a shortened scale-length and the compacting effect of a 12th fret neck join, the emphasis is firmly on ease of playing.

As you might expect at this price-point, the 652ce’s timber specifications impress, with a torrefied Sitka spruce top and figured big leaf maple for the back and sides. Enhanced by the Silent Satin Wild Honey Burst finish, the figuring is especially vivid and three dimensional on the sides but the back on this example is rather more restrained.

The hard rock maple neck displays no figuring, but a shaded finish integrates it nicely into the overall aesthetic, while at the same time de-emphasising the stacked heel and scarf-jointed headstock. With regard to the latter, the structure is likely to withstand the added stresses of six extra strings far better than a one-piece neck.

Other features include a Curve Wing bridge – another refinement driven by player comfort – and Gotoh 510 machineheads. Having just six bridge pins leaves ample space for the three ES2 piezo sensors, and makes string swapping a lot easier, while the 21:1 ratio tuners work amazingly well and are very accurate and precise. We can recall countless six-string acoustics that have proved tougher to tune than this 12-string.

It helps that the Graph Tech nut’s slots are cut to perfection and the strings glide through without ever pinging. No doubt the slotted Micarta saddle contributes too, and it’s almost a work of sculpture. Look closely and you’ll see that it goes beyond simple compensation, with different takeoff points for individual strings – even when they’re closely paired.

“In common with all of Taylor’s V-Class braced models, the 652ce has a ‘produced’ quality straight out of the box”

The Builder’s Edition 652ce arrives with a set of Elixir phosphor bronze coated strings and as always, they sound warm and chimey. The coating is unnoticeable and considering the additional cost of a 12-string set, it makes sense to use strings that will retain their vibrancy for months rather than weeks – if you’re lucky.

Taylor’s recent 12-string offerings have offered almost effortless playability and the 652ce is no exception. Despite an extraordinarily low action, there are no rattles and buzzes, and from a playing perspective rather than a sonic one, it’s easy to forget about those extra six strings. 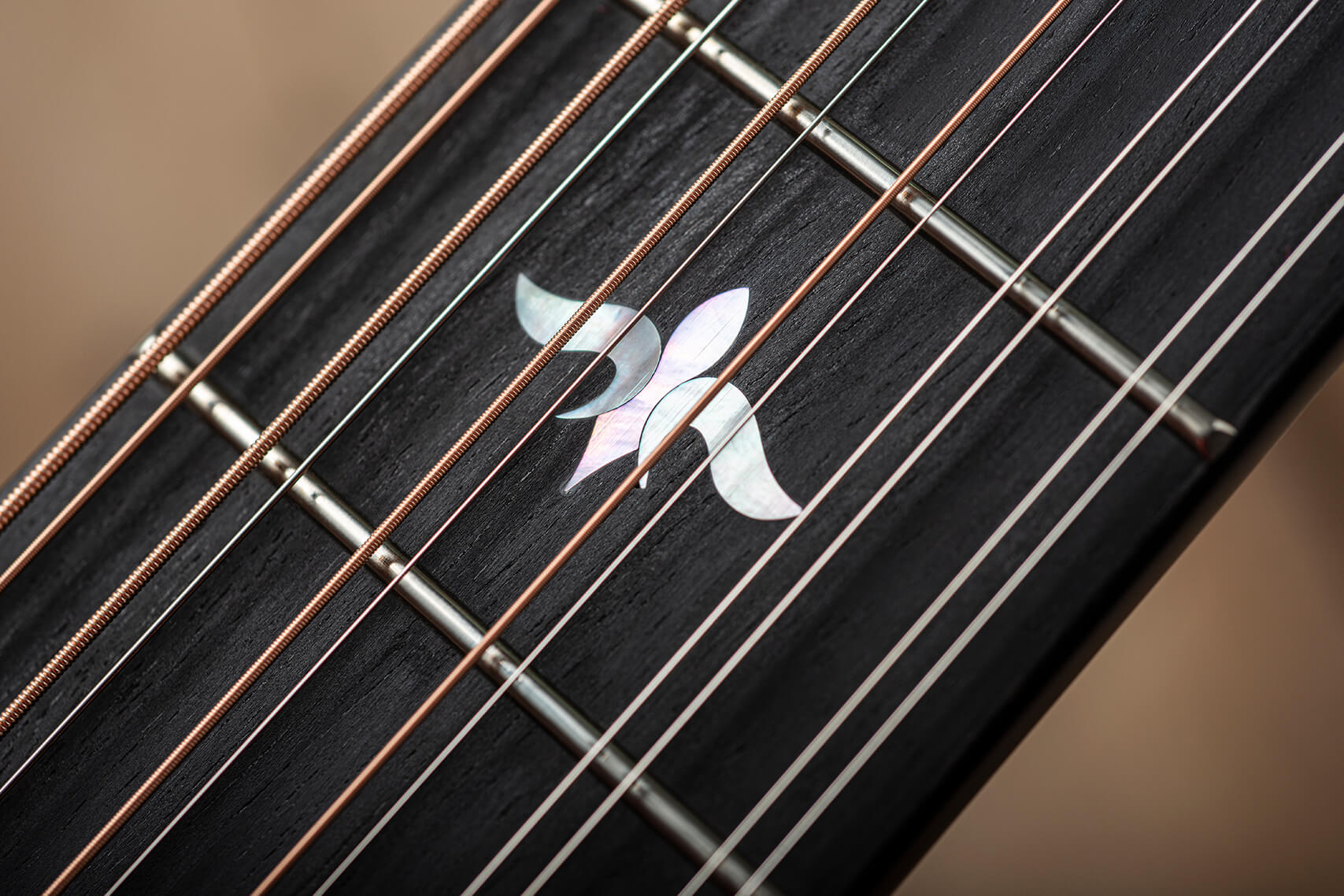 We’re particularly enamoured with the neck profile, which somehow still conforms comfortably to the crook of the hand, despite the increased width. It feels like there’s the merest hint of a V, which is never a bad thing in our books.

Given the relatively compact dimensions of the Grand Concert body, it’s hardly surprising that the tone has little in common with booming drive and power of Tim Buckley or Pete Townshend’s Guild 12s. The 652ce is amply loud and full, but its timbre is characterised more by balance and poise than accentuated extremes of the frequency range.

Perhaps it’s the 12th fret neck join, but we actually hear something of that lap harpsichord tone we associate with the bluesy smaller bodied 12-strings – all though the V-Class architecture and precision-engineered saddle ensure there’s no honky-tonk-style wayward tuning. It’s not bluesy or retro, because the 652ce is too neutral for that, but there’s a crisp precision and delicate shimmer.

The ease of playing and accurate intonation encourage us to venture beyond straightforward rhythm and jangly arpeggios. We’re soon picking out lead lines and even pluck up the courage to try some fingerstyle. Accuracy is required, but it helps enormously that the fundamental string in each octave pair is positioned on the bass side, as Rickenbacker has always done it.

Next, we begin exploring dropped and open tunings. The 652ce copes admirably tuned down to C and the lows retain sufficient weight and focus to provide a wonderfully warm thrum to support meandering excursions on the plain strings. In common with all of Taylor’s V-Class braced models, the 652ce has a ‘produced’ quality straight out of the box. It’s almost like it has been EQ’d and compressed to enhance the natural tone, but not in a way that sounds contrived or compromises dynamic response.

The Expression System 2 pickup suits the 652ce particularly well. It can capture the natural tone impressively, but the treble and bass controls have well-chosen frequency centres for enhancing the sound. We would have no reservations about recording this guitar direct in situations where spillage may cause issues.

The design, superb materials, build quality, tone, extraordinary intonation and playability combine to make this a complete package. Taylor has always produced formidably effective and practical tools but the 652ce is an inspiring musical companion, and a wonderful looking and sounding instrument into the bargain.