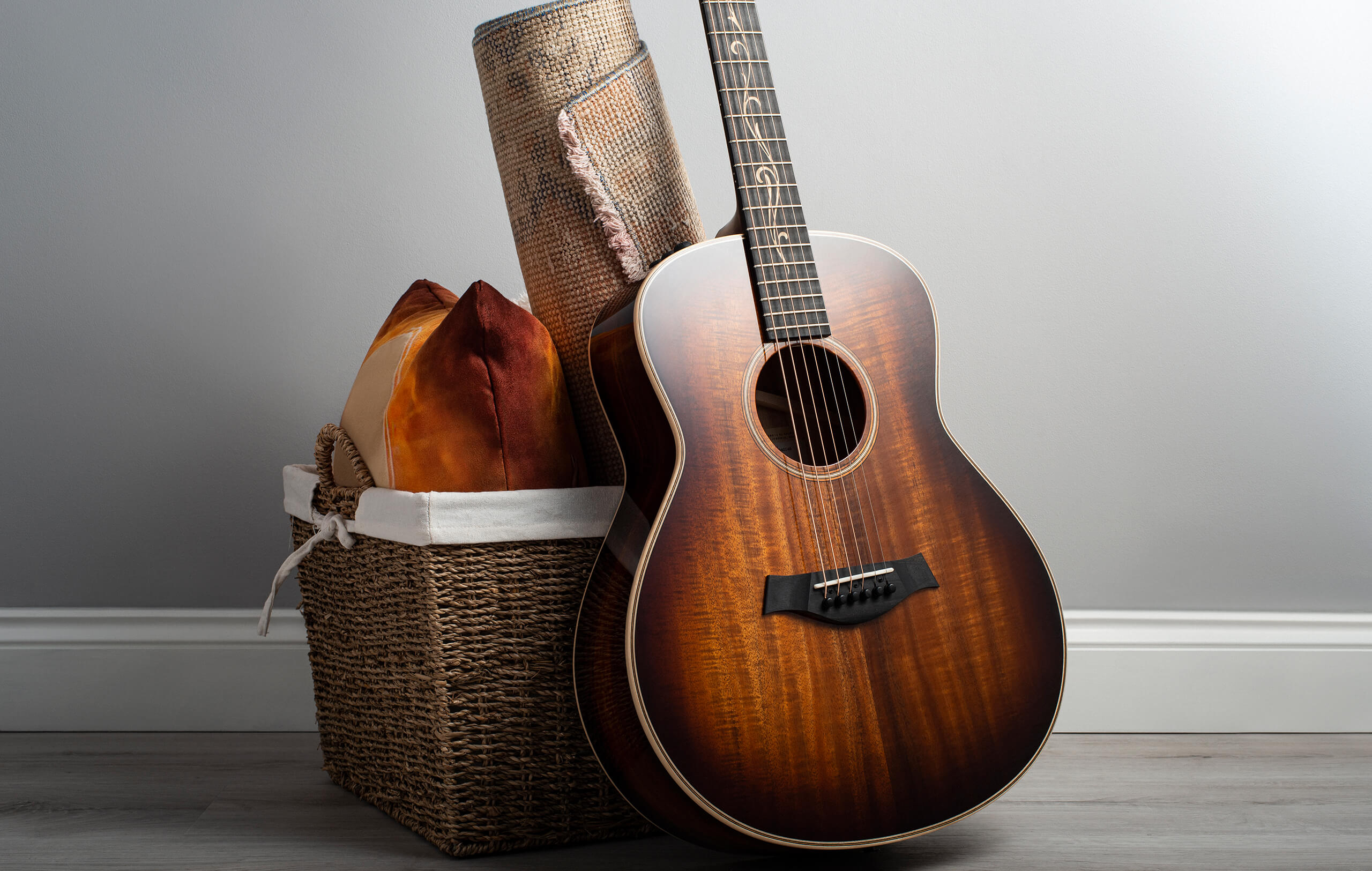 Can it really be a decade since Andy Powers arrived at Taylor? Over the past 10 years, the company’s master guitar designer has given the brand’s designs and sonics a gentle but firm evolutionary push and introduced a range of new models with forward-thinking approaches to bracing and voicing. The compact Grand Theater form factor arrived in late 2020 with scaled down curves from Taylor’s Grand Orchestra and new C-Class bracing – an asymmetrical, cantilevered design developed to wring every drop of bass out of a smaller body while providing the intonation benefits of Powers’ game-changing V-Class architecture.

Made from solid woods at Taylor’s El Cajon facility near San Diego, the GT debuted in Urban Ash and Sitka spruce. For 2021, range options have been expanded to include East Indian rosewood and Sitka spruce on the 811 model (available in acoustic and electrified versions for £3,155 and £3,335 respectively) and striking Hawaiian koa for the back, sides and soundboard of our gloss-finished review model, the sumptuous K21e. 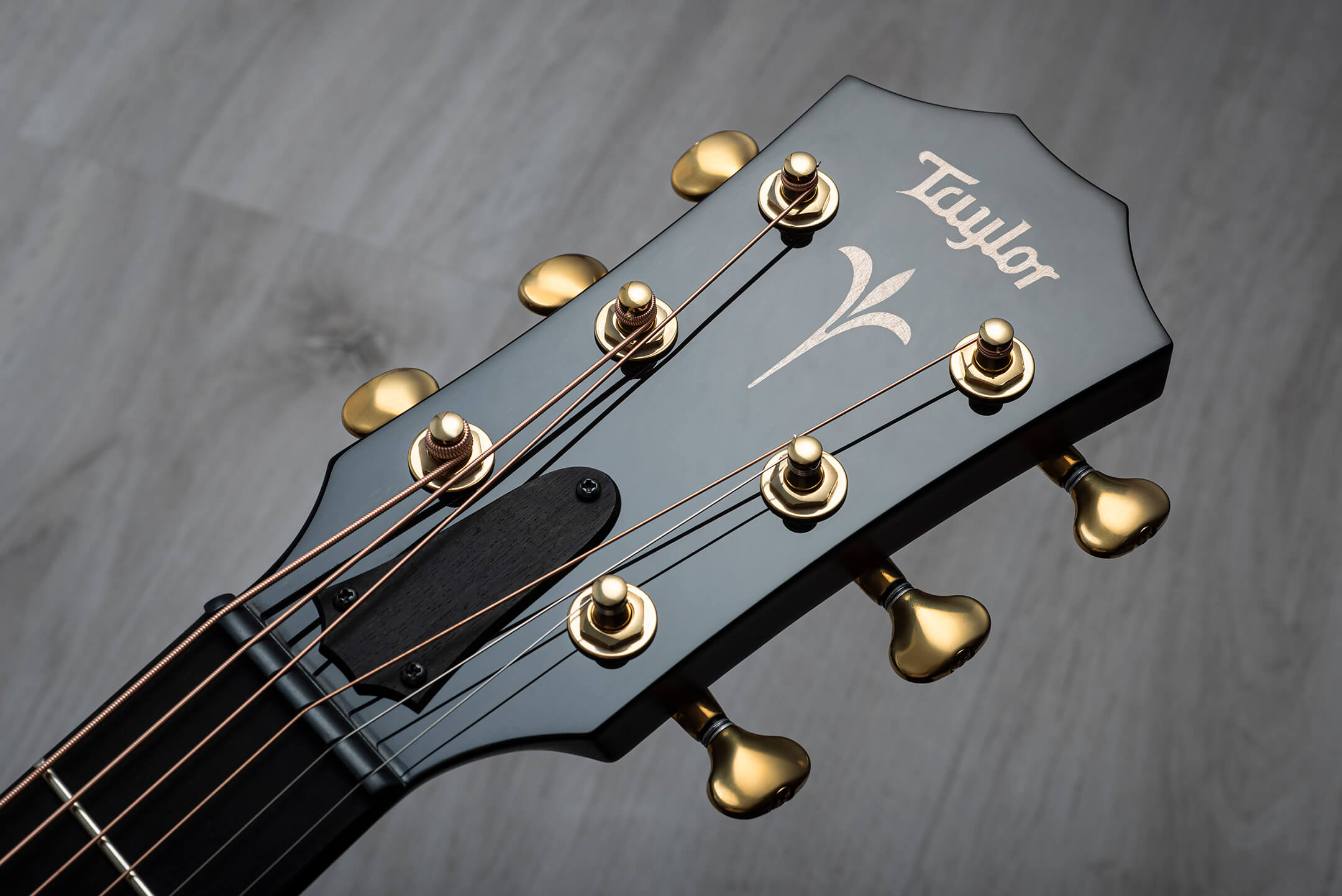 Scale length plays an absolutely fundamental role in a guitar’s personality, both in terms of how it feels and how it sounds. With comfort being one of the main factors in the GT’s design, Powers took inspiration from the more approachable, looser feel you get with an instrument tuned to E♭. Thus, the GT’s scale length is the equivalent to a 25.5” scale guitar tuned to E♭ and capo’d at the first fret, resulting in an instrument with a 24.125”/613mm scale and a slightly condensed fret spacing.

The GT’s compact body certainly feels comfortable and well-balanced on the lap and the koa, while not the most dramatic set we’ve seen, has an elegant chatoyance that’s emphasised by the glossy sunburst finish and framed beautifully by the rock maple binding. The back is a symmetrical four-piece ‘Simons wedge’ construction, named after its creator, Spanish luthier Jorge Simons from Madinter, one of Taylor’s wood suppliers. 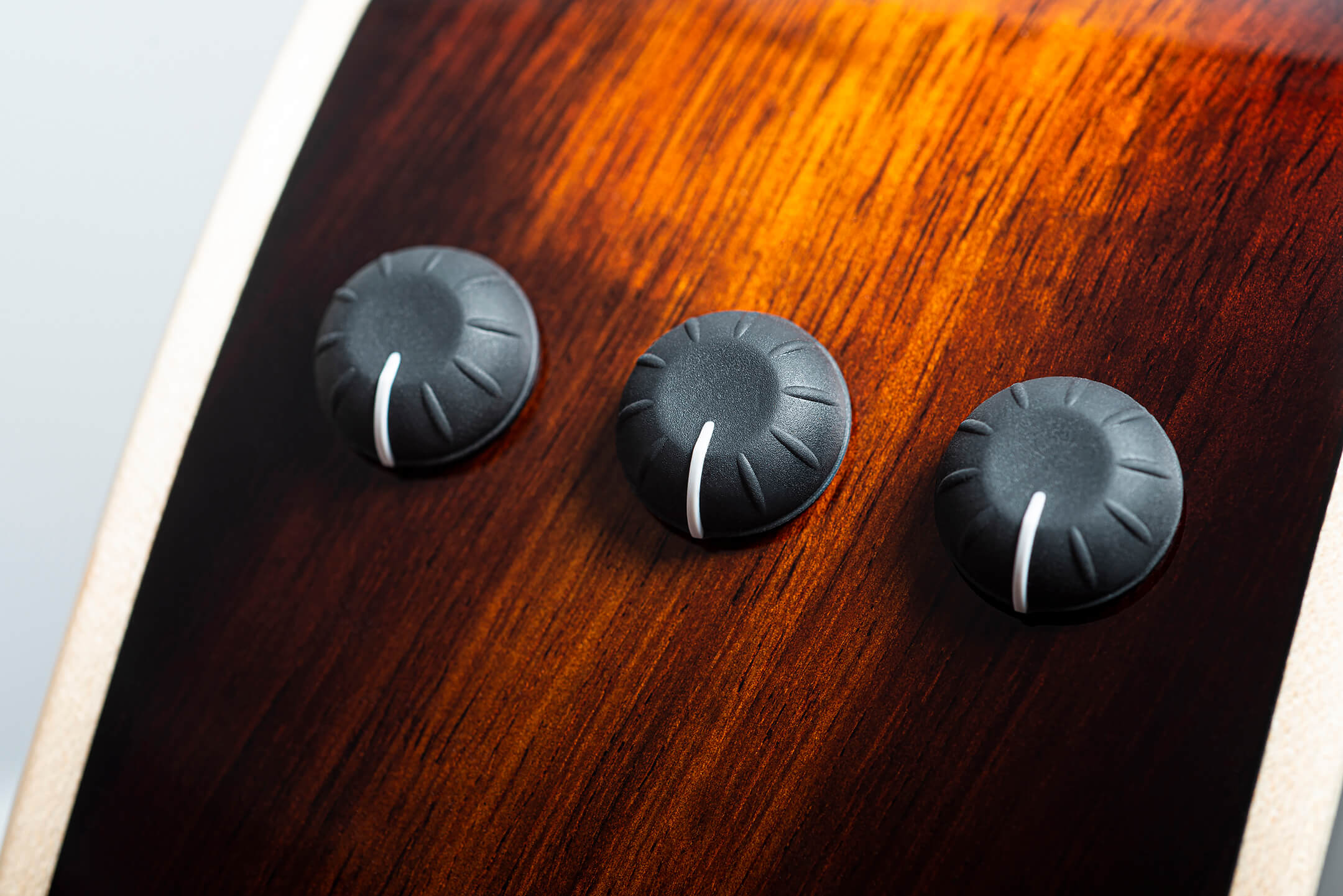 In keeping with the scaled-down theme, the Taylor GT features a 14-fret tropical mahogany neck with a 1-23/32″ nut width and a subtle hint of a V-shape in its welcoming profile. Capped with a West African Crelicam ebony fingerboard and replete with a maple Spring Vine inlay, this is a beautifully made neck and the reappearance of the sunburst finish, this time in satin, on the heel and the back of the headstock is a particularly nice touch. As is to be expected from Taylor, the fretwork is immaculate.

Taylor’s compact T5z headstock is fitted here with a set of Antique Gold Gotoh 510 1:18 tuners – the industry standard for acoustic guitars at the posh end of the spectrum. Fittingly, these are the mini versions, and while their performance is smooth and rock solid, players with larger hands may find them a little fiddly. 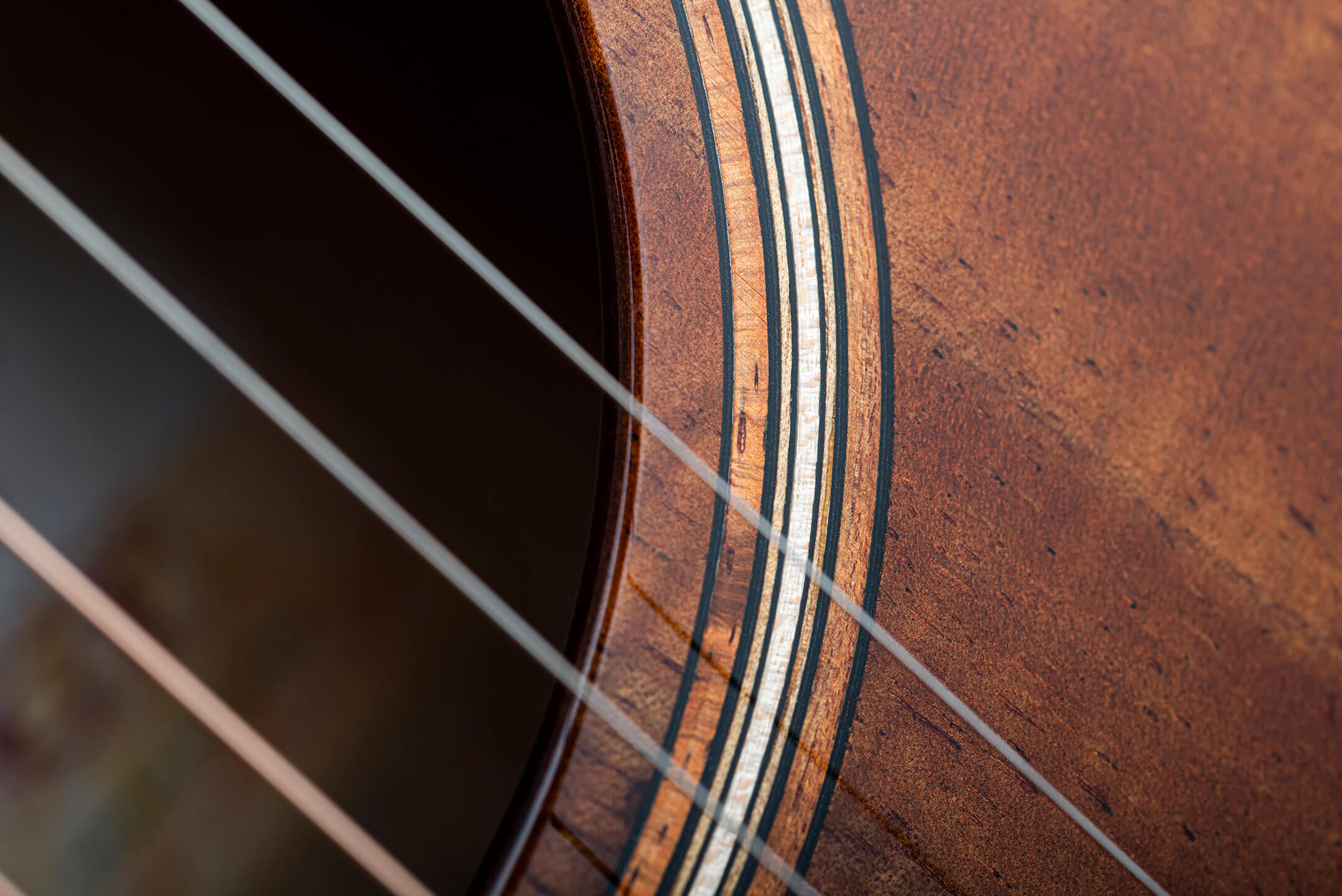 All-koa guitars have been the choice of many acoustic connoisseurs since the 1920s with the wood appealing both visually and sonically, with an understandably heavy lean towards Hawaiian slack key songs, which demand a more sophisticated and lively voice. Indeed, many vintage koa instruments were originally built as square neck lap steel guitars before being converted.

Where an all-mahogany guitar will typically have a woody, fundamental sound well suited to blues and folk, koa instruments are prized for a breathy shimmer across the trebles, strong mids and an articulate bass response that often belies their size and makes them ideal for a wide variety of musical styles. Let’s find out how this example stacks up. 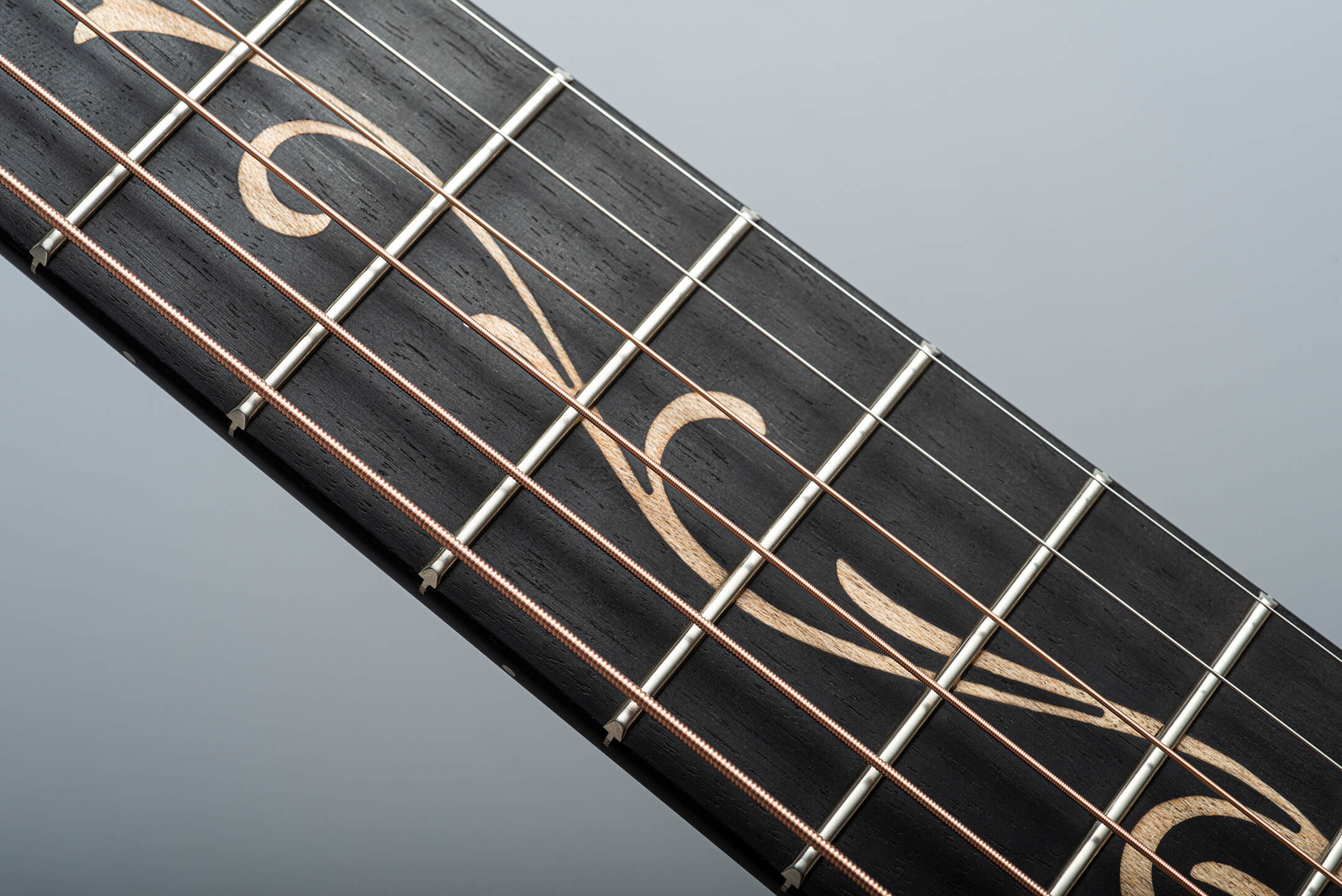 You can tell a lot from an instrument simply by handling it and, on removing the K21e from its robust but travel-friendly AeroCase, it is immediately apparent that this guitar is a lively little number which vibrates readily to our voice when speaking. This isn’t the same as extraneous handling noise while playing, of course, of which there is very little thanks to the expertly applied finish.

Beginning with some fingerstyle ideas in standard tuning, the GT feels quick and inviting with that deeply pleasing koa shimmer present and correct on the unwound strings. First position open chords are full-sounding with a good overall response and sustain, although the chord decay is a little uneven, with some notes dying off quicker than others. That said, this box doesn’t know it’s a guitar yet so you can expect things to smooth as the instrument ages. While the neck is comfortable for chord work, with the profile filling the hand nicely, it is tangibly a little slimmer than a 1-3/4” carve.

Logic dictates that any instrument without a pickguard isn’t intended to be attacked with the sort of brutal enthusiasm with which we approach this guitar in the name of scientific investigation. That said, the GT stands up admirably to our heavy pick assault, only tapping out and losing clarity when we really dig in hard. This could be as much a consequence of the looser string tension as the wood choice and, of course, if you’re looking for headroom then bigger bodies with spruce tops aren’t exactly uncommon in the Taylor catalogue. 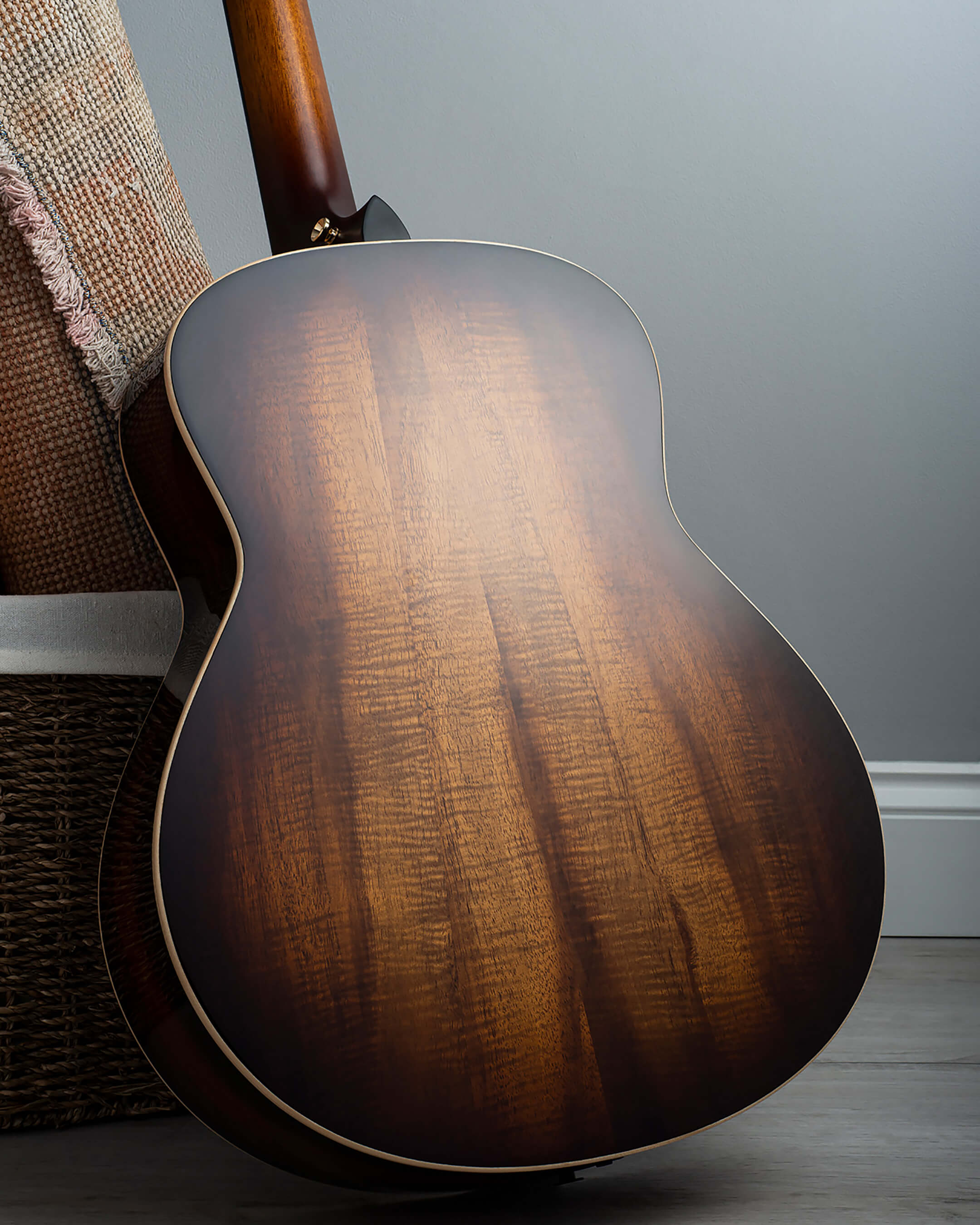 Dropping into DADGAD we encounter a rich and immediately inspiring voice which encourages expressive playing. The bass is full, which might be ascribed to the fact that the size of the guitar encourages a playing posture that keeps a gap between the player and the instrument, leaving the back free to vibrate, as much as to the C-Class bracing. However, the string spacing for both the fretting and the picking hand now begins to feel slightly cramped, especially on the wound strings. While standard attacks are still reasonably accessible we find that tapping, rest strokes and nail return techniques suffer from the slightly tight proportions. This is a pity as it is a genuinely good sound for the solo player.

“once again Andy Powers has paired an established brand legacy with innovative concepts, designs and techniques to create something new, immediate and beautiful”

Taylor describes the GT model as a new category of acoustic guitar in size, feel and sound, which may sound like marketing hyperbole but is not inaccurate. The company also has a strong track record of all-koa instruments dating back to the 1990s. Our inescapable conclusion is that once again Andy Powers has paired an established brand legacy with innovative concepts, designs and techniques to create something new, immediate and beautiful. 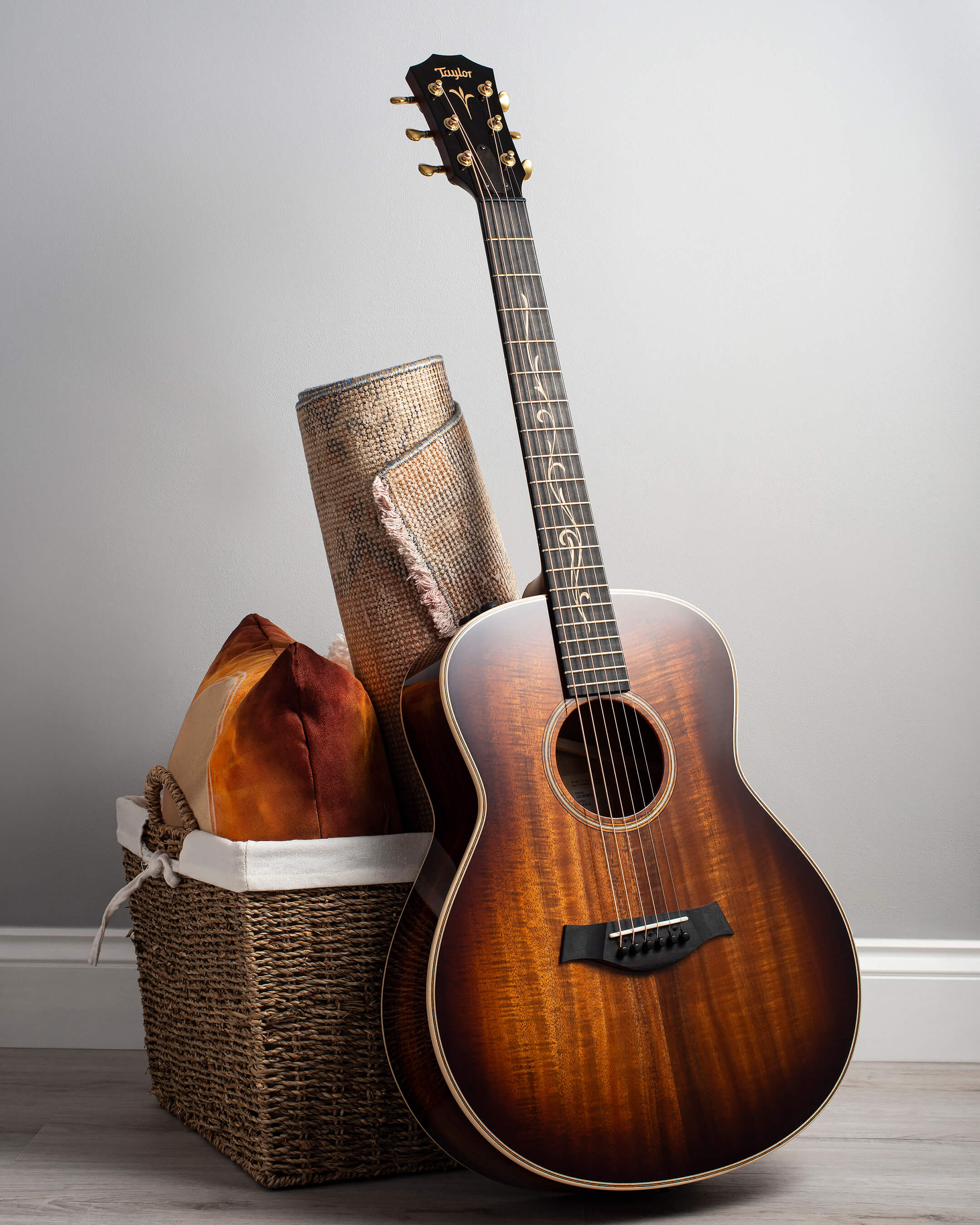