Unusual tonewoods and painstaking attention to detail combine on an acoustic instrument with a distinctly English accent. 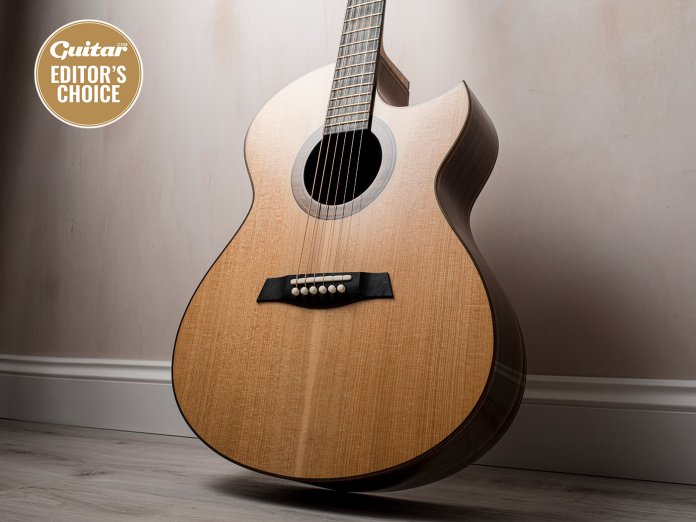 Founded in 2015 by luthier Rosie Heydenrych, Turnstone Guitars has quickly become an established name in the world of British luthiery, with a loyal and vocal fanbase of players around the world. Made by hand at the Turnstone Guitars workshop in Surrey, England, the TG model is a mid-size, modern OM-style guitar built around a 25.6-inch scale length. With a 395mm lower bout and 110mm body depth, it’s the largest instrument in the Turnstone range.

In this instance, we’re taking a look at a a 14-fret model with flared solid headstock and a gracefully shallow take on a Florentine cutaway but as you might expect from a custom luthier, options such as a 12-fret neck, slotted headstock, sound ports, bevels and multi-scale fingerboards are all available. 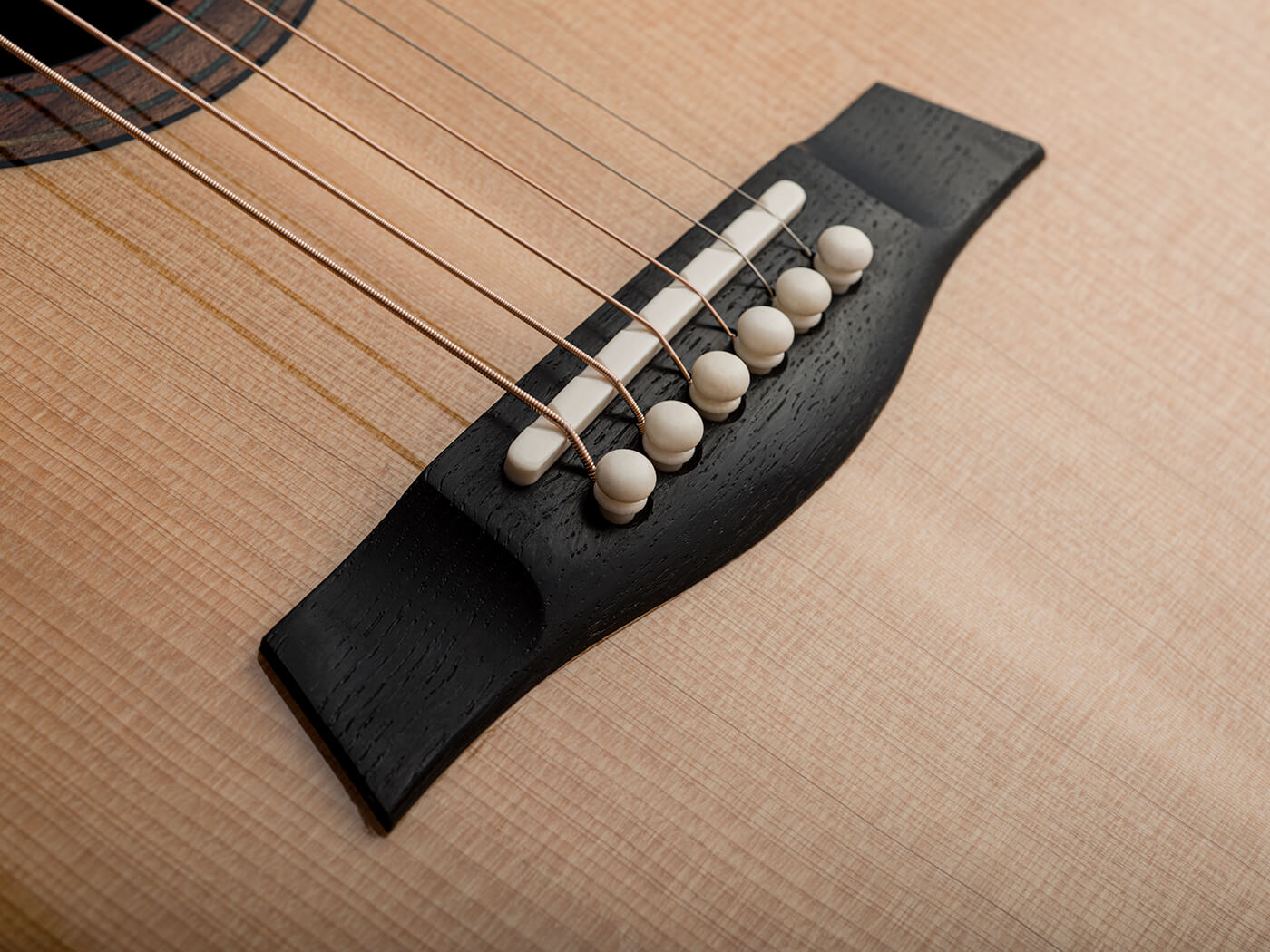 The Turnstone E-Series offers an opportunity for Heydenrych to explore one of her passions – guitars created entirely from English woods. A variety of options are available for her clients to choose from such as lacewood, yew and apple but this guitar features English-grown walnut on the back and sides, a spectacularly flamed sycamore neck, a bridge and fretboard of millennia-old black Fenland oak and a soundboard made from English-grown cedar of Lebanon. Beat that for unusual!

Walnut, in its various subspecies such as black, Claro and Bastogne, has found favour among fingerstyle guitarists for many years now. In the right hand, this often wildly figured wood can lend an expressive, breathy character to the note and a phenomenal bass response. These qualities have led to walnut seeing extensive use on both sides of the Atlantic by luthiers such as Froggy Bottom and Breedlove in the US and Fylde and Lowden in England and Northern Ireland respectively.

The real wildcard in this instance of course is the cedar of Lebanon soundboard. This fine-grained ancient species is most commonly seen growing in the mountains of the eastern Mediterranean and is mentioned in the Epic Of Gilgamesh. The first recorded instance of English-grown cedar of Lebanon dates from 1664, with the tree being awarded the Royal Horticultural Society’s Award of Garden Merit in 2017. That’s all very lovely but any wood used in guitar-making, no matter how exotic, is no more than a source of potential and we are looking forward to seeing how it reacts in the context of a Turnstone guitar.

At first glance this instrument leans towards a muted colour palette but closer inspection reveals several elegant, subtle touches of green in the purfling, at the headstock, the double dot markers and inlay at the 12th fret, and even concentric circles of sparkle acrylic in the rosette. It’s very well judged. The purfling is butt joined rather than mitred – a deliberate homage to UK luthiers such as Nick Benjamin and Roger Bucknall. The finish work, by Rosie’s husband Karl, is also beautifully done. 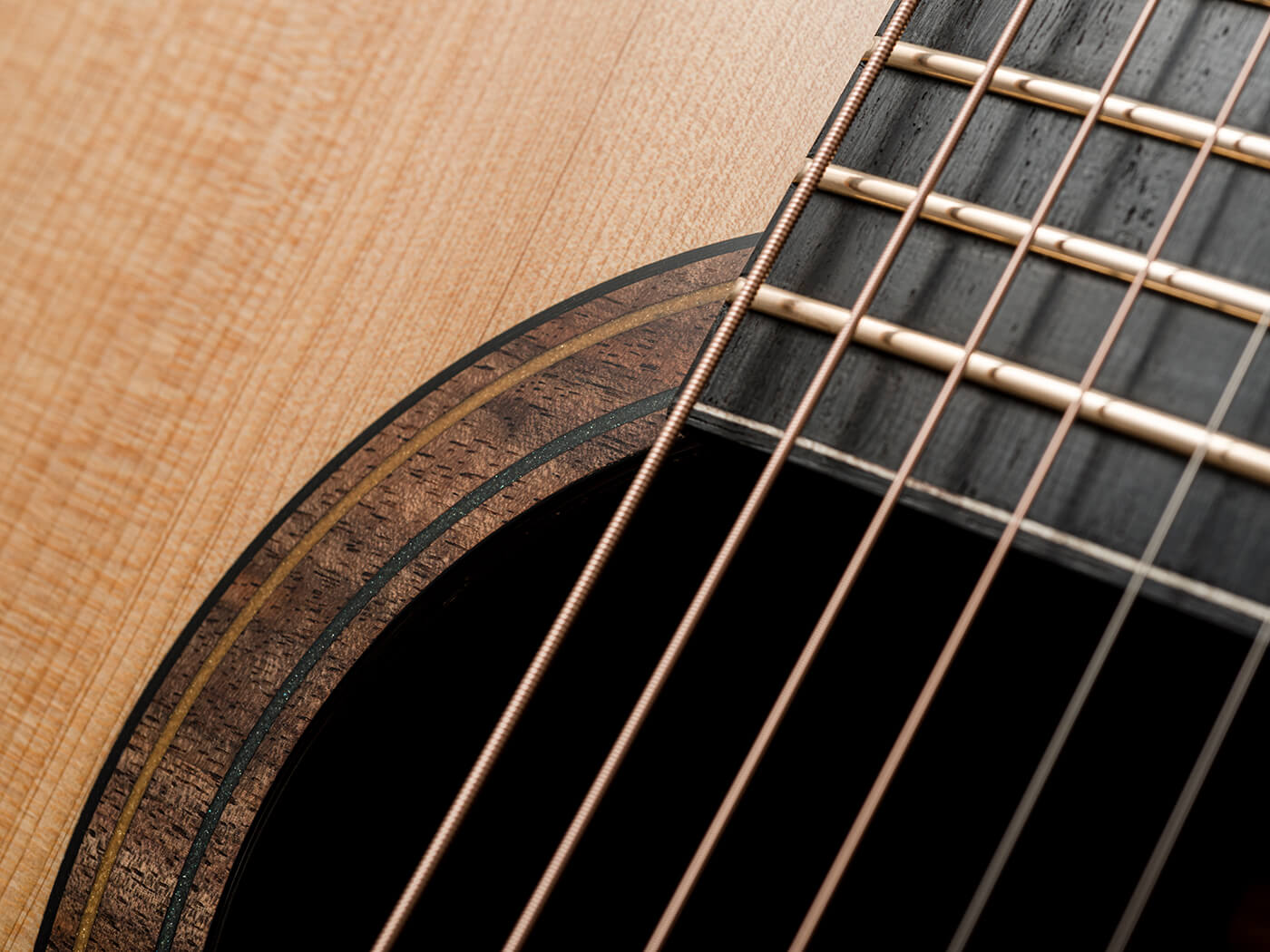 This guitar feels well balanced and comfortable on the lap and a gentle tap on the top reveals a lively sweet spot behind the bridge hinting at a full voice to come. The neck is a beautifully carved C shape which fills the hand and feels reassuringly immediate. The fretwork is uniformly excellent all along the neck, and the action is low enough to be comfortable with no buzzes or other unwanted noise. 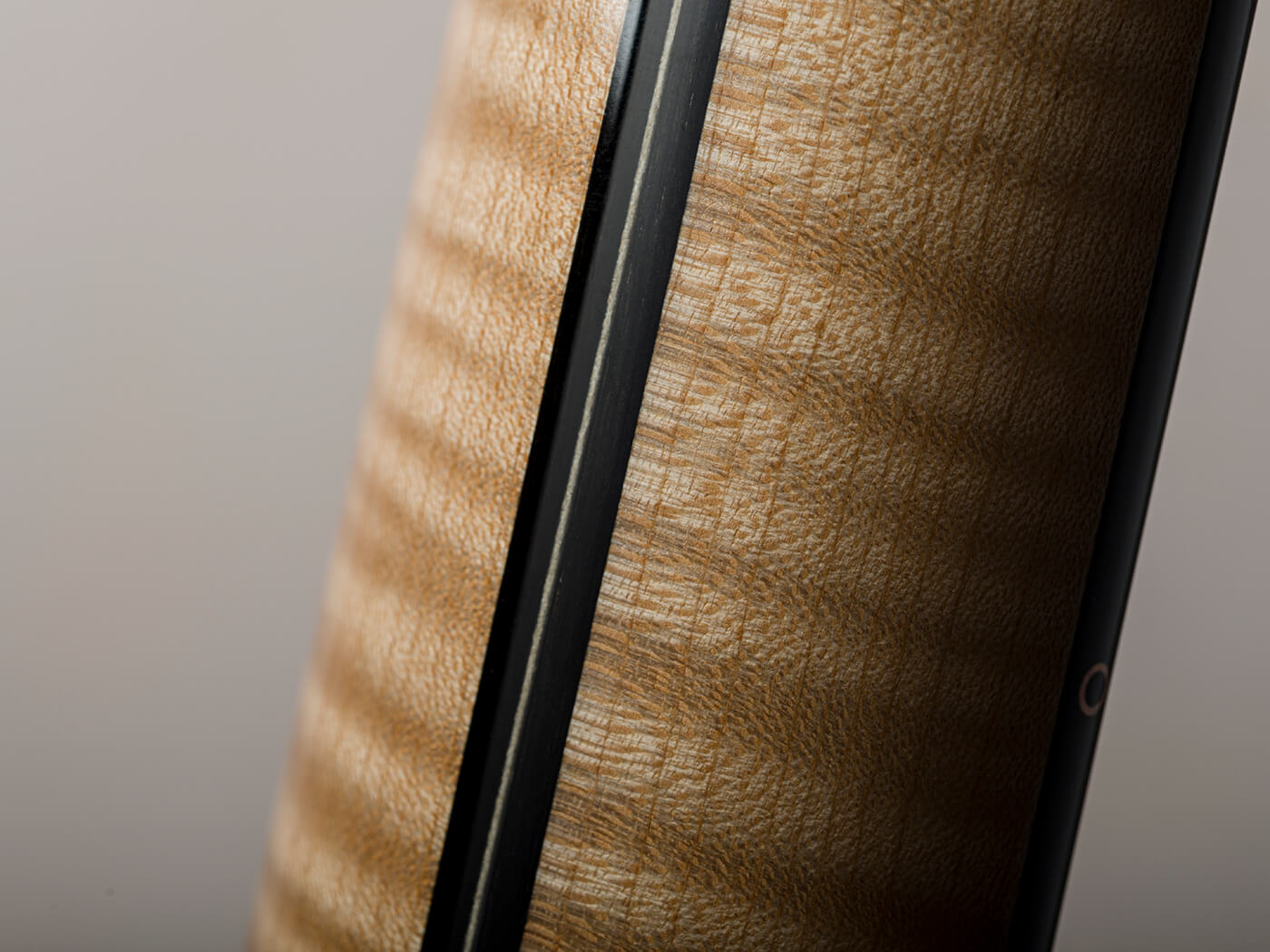 Beginning our playing session in standard tuning we explore the fretboard with some open chord shapes revealing an open, shimmering character to the treble strings. It’s rich but without an overpowering overtone content, making the TG a great strummer, especially when accompanying vocals.

The front of the note is rounded and warm with none of the scratchiness that can come from a more heavily braced cedar soundboard and, while the dynamic range of the instrument is not as wide as you’d find on a similar instrument in spruce, there’s still enough acoustic volume to get your point across.

Dropping the pick and leaning in with some fingerstyle blues unleashes a dry, throaty growl in the bass and enough sustain to get some seriously expressive bends happening. However, despite the fact that the relatively large grain pores of the Fenland oak fingerboard have been filled, there’s still scope for more attention to eliminate any extra finger squeaks when using a wider vibrato.

Moving onto DADGAD – a seamless experience given the expertly cut bone nut – the instrument reveals why Turnstone Guitars have found favour with fingerstyle luminaries such as the great Martin Simpson, who can be seen cradling his own Turnstone instrument on the cover of his new album Home Recordings.

The treble shimmer, throaty mids and articulate bass response first hinted at in standard tuning blossom into a full, orchestral voice as the guitar responds to the overtones and sympathetic resonances of the open tuning. Complex chords sing clearly and every nuance of slap and tapped harmonic Hedges-style Rootwitchery comes through. It may not be the fastest response out there but the timbral character of each note is rich and satisfying.

What’s remarkable about this guitar is the very English nature of its voice. With its earthy character, it sounds particularly good for the textures of Bert Jansch and John Renbourn, Clive Carroll and John Smith. However, if you are looking for something different, it should also be emphasised that our extensive experience of Turnstone instruments in recent years has demonstrated that Heydenrych is more than capable of understanding and adapting to an individual client’s needs when it comes to creating a custom instrument.

While the scale of British luthiery pales in comparison to that of North America, this instrument and others like it – soon after finishing our testing we played an absolutely devastating Turnstone made from Alpine spruce and apple – are proof positive that the high standards set by the likes of Stefan Sobell, Ralph Bown and George Lowden are safe in the hands of builders such as Rosie Heydenrych. 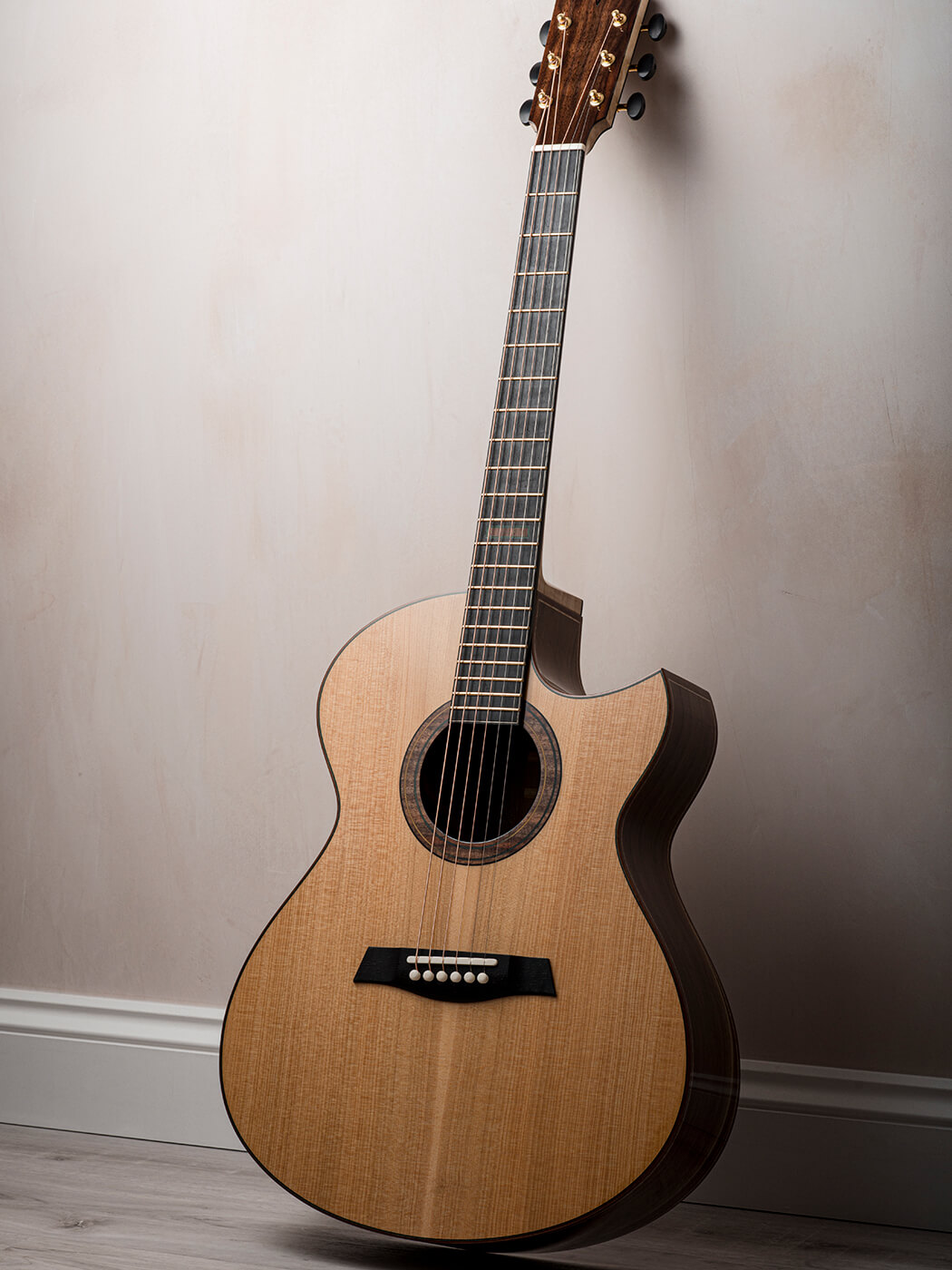