The London four-piece return after six years with an album that reflects both the new and the old in urgent fashion.

It’s a shocking 17 years since Silent Alarm delivered Bloc Party’s idiosyncratic, fully-formed floor-fillers into a world still trying to get a handle on just what shape late 2000s guitar-pop would take. Right out of the gate, Bloc Party’s constituent elements snapped together with astonishing ingenuity. Russell Lissack’s twisted, serrated guitar meshed in fusion with Matt Tong’s oddball rhythmic excursions into hip-hop and dance beatscapes. The band’s adventurousness brought to mind a team of lab coat-toting scientists, accidentally unleashing some sort of multi-headed mutant.

Towering over all, was Bloc Party’s most fundamental pillar – lead singer and rhythm guitarist Kele Okereke’s focal magnetism. It was this often brutal synthesis of components that resulted in the euphoric eruptions of Helicopter, Banquet and the hypnotic So Here We Are.

Back in 2005, few could fault the young band’s musical fortitude and individualism. Here in 2022, perceptions on Bloc Party have shifted. After widening their musical scope with the underrated Intimacy in 2008, Okereke and crew plunged further down vivid studio rabbit holes that, for some, obfuscated those core elements that first endeared. This culminated in 2016’s Hymns; an often confused, often conflicted and thematically disjointed record. It was an indication that, while the band were clearly still intrepid enough to venture into new frontiers, something essential had been mislaid along the way.

Finally seeing light after being announced a mere months before the Covid-19 pandemic, Alpha Games, the band’s sixth studio album, initially appears to be a dramatic exercise in course correction. Brutal opener Day Drinker kicks off Bloc Party’s darkest record to date with a violent lunge across the table, Lissack’s sharp-edged guitar barbs square up alongside a classic charged Okereke vocal, his lyrics setting the album’s stall – an addled safari into the nocturnal antics of the hedonistic, the violent, the shady and the ruthless. A far cry from the much-pilloried primary colours of Hymns. 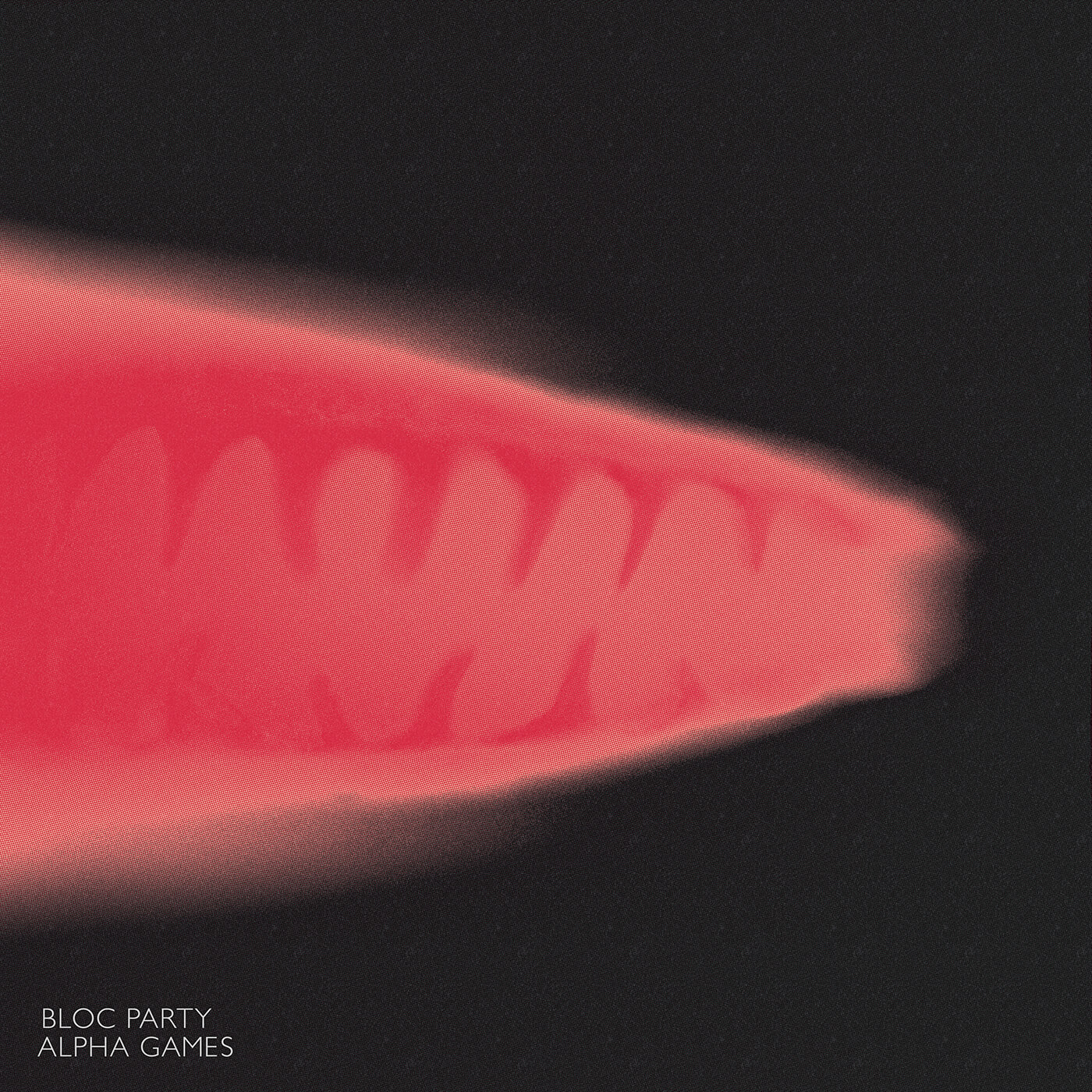 Traps is an even more satisfying restoration of Bloc Party’s more primal side. Its rolling drop-D riff stomps out the track’s mechanical, imposing structure, as Matt Tong’s successor behind the kit, Louise Bartle delivers some extraordinary drum salvos. The fiery crucible of a hypnotic, whammy-pedalled guitar solo rounds off a track grounded in some truly gutsy rock. It’s an enticing, imposing reassessment of the band’s edge, and promises much for the journey to come…

Following the plodding mid-tempo rumble of You Should Know the Truth and the on-edge rumination of the sinister Callum is a Snake comes the album’s musical and thematic turning point, Rough Justice. Driven by a dogged drum machine which maintains a grinding, motorised throb, Lissack’s dissonant chords scratch impishly around the sides of track that builds into a case study in corruption. It’s a malevolent summation of both the record’s thematic and musical aims, and is quite likely the single darkest thing that Bloc Party have ever recorded.

Galloping out of Rough Justice’s outro comes one of the album’s zanier cuts. The day-glow glam of the wonky The Girls are Fighting – sounding to all intents and purposes like some hideous caricature of Rock and Roll Part 2. While the song itself is a little too wry (and its ‘Jägermeister and Vodka Lemonade’ referencing lyrics are a little cringe-inducing) the track does house one of the record’s most affecting guitar moments. Russell’s unfurling, wah-wah lead is electrifying and inventive, and well worth the price of entry into this strange little pseudo-glam club.

While the first half’s strengths outshine its more confounding moments, the latter half is a little less cohesive. While the soaring excellence of Of Things Yet to Come and the record’s resplendent pre-denouement If We Get Caught are blazing focal points, the circular monotony of Sex Magik outstays its welcome. By Any Means Necessary spends half its run-time bogged down in the type of OTT studio effects that, while once may have been received as the innovate sound of something pointedly modern, now sound as tacky as the big-name digital synthesisers of the ‘80s appeared to the ears of the following decade.

In contrast, though, In Situ represents perhaps the record’s most hair-raising use of the guitar as sonic paintbrush. The track’s shaky, EDM-inflected grounding is peppered by Lissack’s delayed guitar in the verse, as he attempts to corral melodic meaning. The delirious solo loops and twists around itself – seeming to catch itself in its own shoelaces, before finding its feet for a blistering end.

“The system always wins” intones Kele atop the delay-soaked, sunrise epilogue, The Peace Offering, an aptly mercurial end to a record preoccupied with savage night-forms, uncaged by alcohol, lust and ambition. Despite its missteps, Alpha Games remains a thoroughly engaging listen – maintaining a clarity of concept that allows us to forgive those more reckless mix and arrangement choices.

One of the record’s most satisfying triumphs is the return to the foreground of Russell Lissack’s colourful guitar work, locking in tandem with Okereke’s rhythmic chugs, to render the guitar a much more vibrant and consistent presence on Alpha Games, arguably since as far back as 2007’s A Weekend in the City. While by no means a perfect listen, Alpha Games, at its best, finds a resolute Bloc Party rediscovering their grit. Littered with superb cuts, such as Traps, Of Things Yet to Come and Day Drinker, the indications are that the wind is once more in their musical sails.

Ted Nugent says he would “love” supporters to go “berserk on the skulls” of Democrats, Marxists and Communists while at a Trump rally